BACK TO ALL OPINION BLOGS
Currently reading: Matt Prior: Why heavy cars aren't worth their weight
UP NEXT
Matt Prior: Where have all the practical fast cars gone?

Matt Prior: Why heavy cars aren't worth their weight

Audi's E-tron Sportback drives well enough, but our man would rather have been steering something smaller and more spry
Open gallery
Close

I had thought the apogee would be the V10 Audi RS6 Avant, in which they put all but a Lamborghini engine in the front of a big estate car. How very amusing but how very ludicrous, I thought, as we stuck it on the scales at MIRA shortly before doing a 4.4sec 0-60mph time. When fuelled, it tipped the scales at 2145kg.

That afternoon, some time in 2008, it went and posted the fastest time we had yet recorded on MIRA’s perma-hosed wet handling circuit. It cut through standing water to lap in 1min 6.1sec – 2sec faster than the Audi R8 of the time and 3sec faster than the McLaren 720S (although surface changes have thrown later figures a little out of whack).

But that number: 2145kg. Sheesh. We won’t see the likes of this again, I reckoned, as we sat in the MIRA canteen (whose puddings are a good way to contribute to one’s own girth).

A while later, I attended an event run by the Niche Vehicle Network, a very cool association of more than 900 specialist companies that shares information, aims to get funding and exists to promote niche vehicle manufacturing and engineering.

There, a materials engineer from a major car company outlined how light cars would have to become if, conventionally powered, they were to meet incoming environmental restraints. Composites would have to be cheaper to make it possible, it was reckoned, because a city car would have to weigh less than 600kg and a family car not a great deal more.

Difficult to achieve but exciting if it could be done. Because what could be cooler than a whole load of light cars arriving? Half-tonne city cars would be compact and therefore impossibly agile. Making sports cars out of them would be a doddle. What a laugh.

Naturally, then, I’ve spent much of the past week in a family-sized Audi that has a kerb weight of 2520kg.

Going by the measured weight of an E-tron variant we road tested last year, you can call this Sportback 2600kg by the time you pop on some options and ease it onto a set of scales.

It passes environmental inspection by dint of emitting no CO2 and no gases to harm air quality. At least, not at the tailpipe. And for the Audi E-tron’s kerb weight you can thank, in part, the 95kWh battery under its floor that weighs the best part of 715kg.

I enjoyed the E-tron. It’s one of the world’s more relaxing ways to get around. But when driving it, I could never quite escape the feeling that I would rather have been at the wheel of something a fifth of its weight. 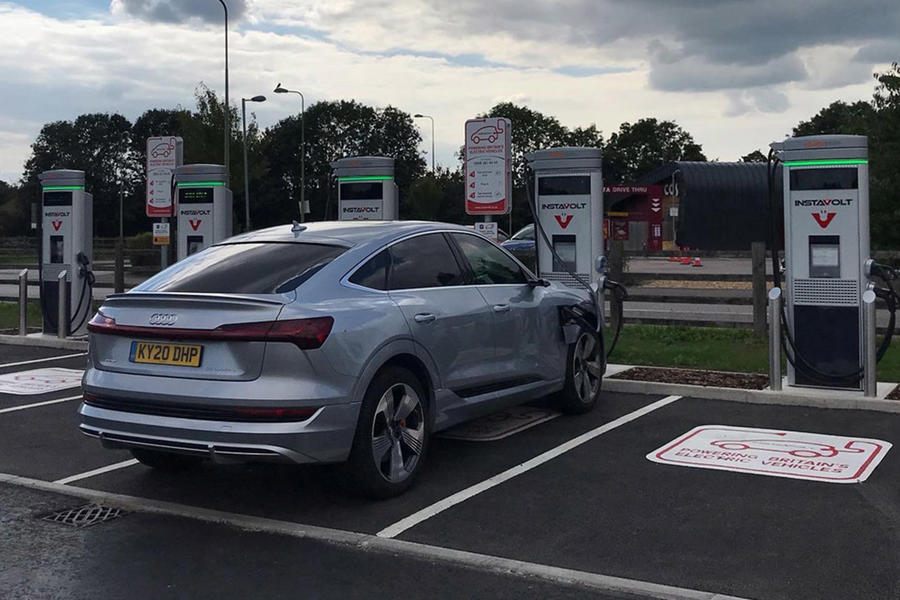 ■ I live in an area poorly served by fast EV chargers and in a house whose electrics are sufficiently ropey that, if I plug in a car, I then sit like the bloke in Apollo 13, slowly flicking switches back on until the circuit breaker clicks. I should get a wallbox. In the meantime, kettle or fish tank?

Praise be: Instavolt has opened a 125kW array 15 miles away. Just as close to the M40 as a service station but better, albeit expensive, at 35p per kWh – about twice as much as charging at home. A full ‘tank’ on the E-tron would cost more than £30 and good for only about 200 miles. There are various cheaper ways to get electricity, of course, but at that rate, it costs as much per mile as a conventional car returning 40mpg.

So charging electric cars is at price parity with petrol - and that's forgetting that there is no tax on it yet.  Wait for 'CO2 impact duty', 'Windmill subsidy fund', 'Road mileage contribution', VAT on the lot, and a whole host of others to be dreamed up taxes to appear.

We'll be seeing 70-80p per kW charging for these things.

And don't think charging at home will get you out of it - all those subsidised wall boxes have a 4G link back to the base station ready for billing.... and cut off if they decide the grid is pulling too much power.  That car you were charging to get ahead on that long trip may surprise you by being empty when you start it on a cold, still, winters morning.

It’s nearly impossible to find well-informed people on this topic, but you sound like you know what you’re talking about! Thanks, keep writing! Also thanks for allowing me to comment! By the way, allow me to introduce myself. We're Yesonline.pk, The Best online shopping Stores in Pakistan where you can buy 100% Original Branded & Non-Branded Women cloths, please visit our website for further details.

We have just seen the first result of new Euro ncap testing in which cars have an offset head on collision with a 1400kg trolley. Despite five stars overall, the new Yaris struggled to protect its front seat occupants in that test judging by the weak foot protection and marginal chest and leg protection results. If the little car had a similar impact with one of these it would be destroyed along with all the people on board. You either buy a tank like this to protect your family (not an option for most) or take a big risk in a smaller car. Not great is it.