BACK TO ALL OPINION BLOGS
Currently reading: Does Drift Mode make the Ford Focus RS more agile on track?
UP NEXT
Matt Prior: Are posh French cars really hard done by in the UK?

We take a Focus RS to Bedford Autodrome to see how its lairiest setting influences its on-track ability; with video
Share
Open gallery
Close
Share story

If you've seen a video of a Ford Focus RS in Drift Mode, you'll know just how sideways it can get.

Drift Mode is unquestionably effective at creating big yaw angles, but I’ve been wondering for some time now - can it also be used more delicately to make the RS extra agile on track?

The question first came to my mind way back in the spring, when I took an RS to Spa-Francorchamps for a track session the day after the World Endurance Championship (WEC) round. I asked Ford’s racing drivers for advice on tackling Spa, and all recommended using the drift setting for a quick lap.

“I’d use Drift Mode all the time,” was the advice of Ford GT racer Billy Johnson. “It’s more fun and agile that way.”

Inspired as I was, the following day I never managed to test Drift Mode at Spa, firstly, because I didn’t fancy the prospect of swapping ends halfway up Eau Rouge, and secondly because I didn’t want to embarrass myself in front of the pros. I decided to leave the car in the less lively Race Mode, albeit with the electronic stability programme (ESP) off, and that proved to be highly effective.

Watch the video below to see for yourself.

But that was then. I’ve grown a few more hairs on my chest since (I count two or three), so holding the keys to our long-termer RS and faced with a chilly winter morning at Bedford Autodrome, I finally feel ready to put Johnson's advice into practice.

Bedford is a familiar setting to me, and the lack of obstacles around the track make it much easier to switch off ESP and engage Drift Mode. Yet even in its slipperiest mode, the RS doesn’t immediately feel massively more agile when sticking to racing lines.

It’s happier to wag its tail on corner exits, but go into a corner at pace, hold the steering lock tight and power hard, and you’re met with understeer – the sort you’d expect in something like an Audi S3. Go in slower and hold the wheel tight before powering hard and again, the agility isn’t immediately there, but rather too much oversteer, which you naturally correct. But then Drift Mode’s unconventional torque split means you almost always over-correct and end up looking like a bit of a twat.

It takes several attempts to learn that the RS in Drift Mode doesn’t oversteer as easily as a rear-wheel drive car, like I thought it might, and that it also doesn’t so predictably understeer like many all-wheel drive ones often do. Instead, it requires a heavy right foot but also precise steering inputs. Basically, it needs aggression but also some delicacy. 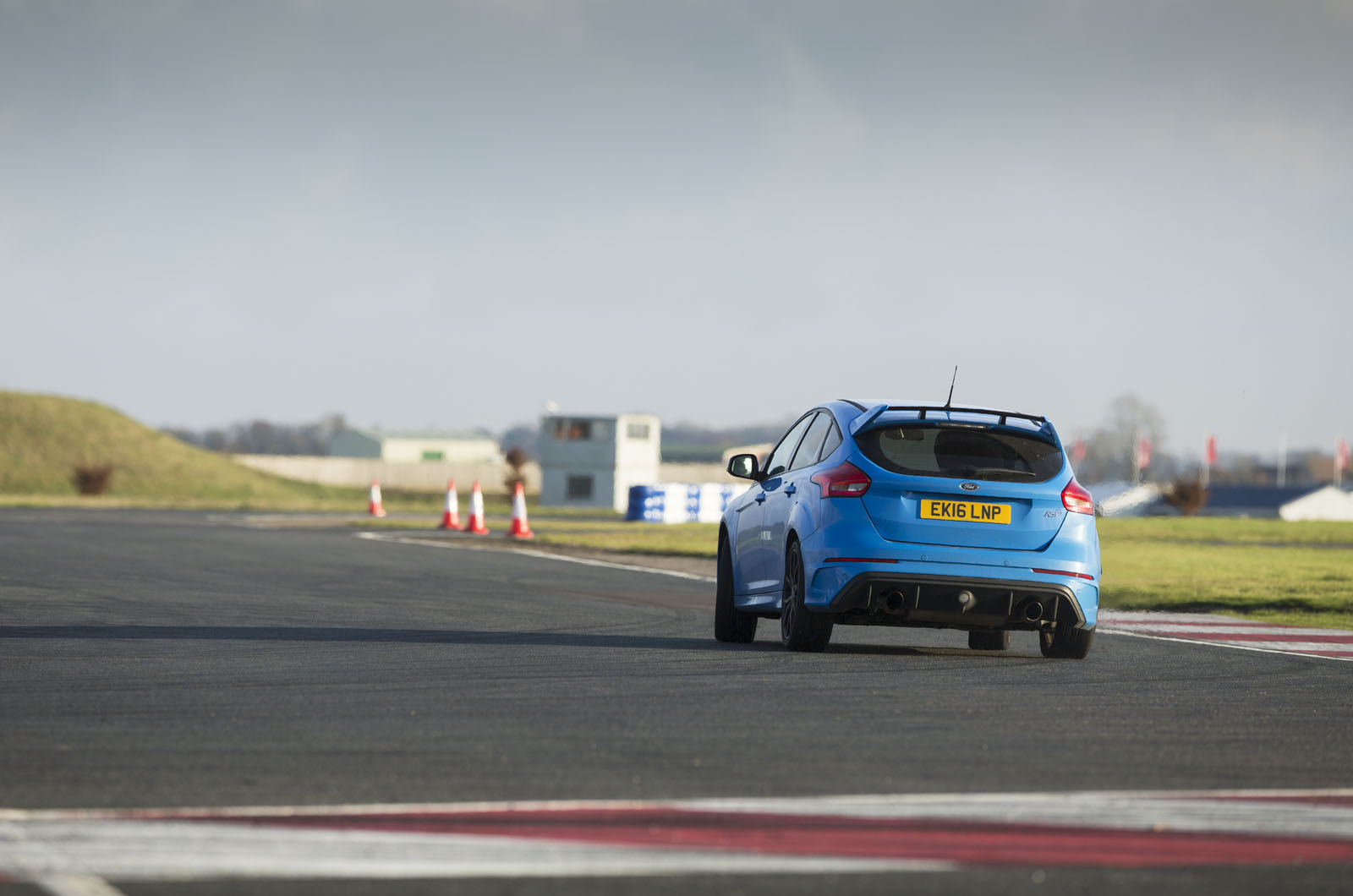 If you don’t figure that out you might spend the whole day oversteering too much on one corner and then pushing wide on the next. But gel with it, as I thankfully did, and you suddenly find yourself holding lovely powerslides towards corner exits while still enjoying satisfying traction. You find yourself deliberately braking late and letting the car run out wide into hairpins so you can pin the throttle and dance the car onto the apex and then towards the outside kerb. Once unusual responses from the car’s all-wheel drive system become predictable and the Drift Mode’s ability to shove all of the back axle’s torque to the outside wheel becomes a silly but giggle-inducing trait.

By the end of the day, the only thing that stopped me from lapping well past dusk was the chequered flag. That, and an inside front right tyre that looked to be fast approaching three-point territory.

I’m not sure if Drift Mode makes the car any quicker on circuit – in fact I’m almost certain it does the opposite – but my answer to that opening question is simple. Drift Mode can be used sensibly on track and those of us not chasing laptimes should make it their default choice. Johnson was right.

What a useless feature,a drift button!,ok if you do track days,fine,but it must cost a bit for Tyres unless you have a set just for Track Days,even then that's still expensive,no, drift button?....but,what would you replace it with as a MORE useful er,em Button?
Harrymc 4 January 2017

The other drifty hot hatch

I was in the grey M135i on this day. Very surprised to find that the BMW is quicker in a straight line than these, and lets not forget, it has the natural drift mode called RWD.
Ruaraidh 3 January 2017