BACK TO ALL OPINION BLOGS
Currently reading: Why ride comfort is the new handling
UP NEXT
Opinion: Is this the end for Bugatti's W engines?

Why ride comfort is the new handling

Car makers should prioritise ride refinement in their latest models more, and reducing wheel sizes is key to that
Close

I, like everyone else who writes for this esteemed publication, can still fully appreciate and enjoy driving a car with a well-sorted chassis in 2019.

Even accepting the ever-growing traffic levels and ever-increasing war on speeding, sharp handling can still be appreciated. Living in leafy Berkshire, I don’t have to drive far to find a quiet, entertaining piece of road where I can stretch the legs of whatever I’m in, while most of Britain’s B-roads can still expose flaws in an overly soft set-up.

But - and this is perhaps where I distance myself from some colleagues - the quality of a car’s ride is of greater significance to me. Even on the aforementioned B-roads.

My patience has been tested by a number of cars recently. One in particular stands out: the new Renault Mégane RS 300 Trophy. For the 10% (or less) time behind the wheel where I could actually enjoy its super-tight body control and prodigious grip, the other 90% of time was spent being jostled around like a wallet in a washing machine.

As road tester Simon Davis noted in our UK drive of the Trophy, the stiffness and crashiness of its ride (it gets the Cup chassis as standard and no adaptive dampers) borders on absurdity. It picks up bumps you never knew existed on your favourite roads, and you spend more time looking out for the next pothole to swerve around than you do pinpointing the next apex. In fact, on my commute down the recently resurfaced M3, the constant up-and-down bobbling motion left me feeling a bit sick.

And such issues aren't exclusive to performance models. Far from it. I’ve recently taken delivery of a DS 7 Crossback as my long-term test car. This is a model that's marketed as very much a comfort-focused SUV, yet it has been specced with 20in wheels, like the car pictured below. 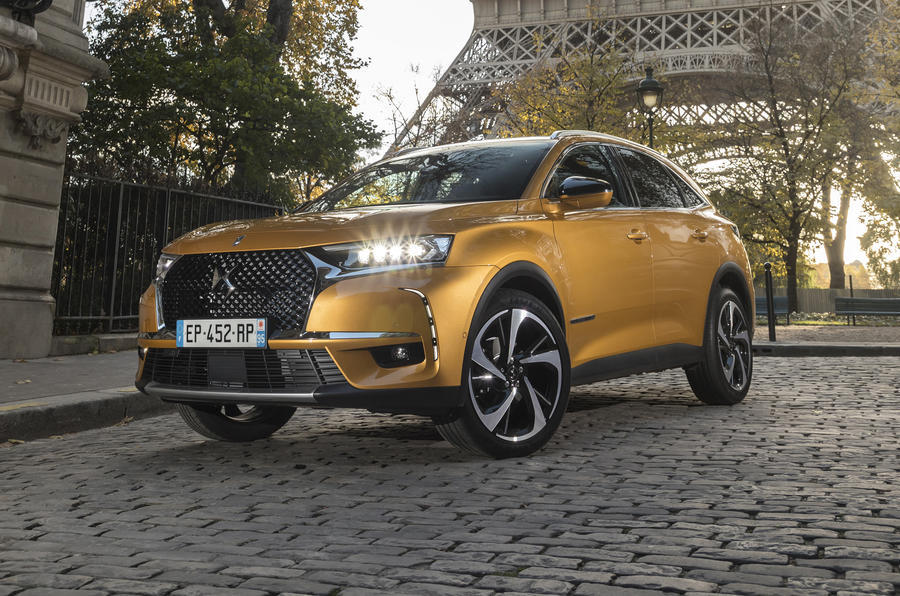 Stylish it may be, and the ride is a long way from being as uncomfortable as the Trophy’s, but the reduced tyre sidewall makes low to mid-speed surface disturbances more apparent than they should be, given the brief. Mid-corner potholes also throw the car off your chosen line significantly. I’m expecting to encounter more trim rattles as a result, too.

These experiences are echoed across almost every SUV I’ve driven in the past couple of years. The bulky side profile forces designers to spec ever-larger wheels to fill the arches, adding to suspension settings that are often already stiffer than those of a normal hatchback or saloon in order to mask the higher centre of gravity. It has an effect on every segment, though: the ride of my old Kia Ceed long-termer was a great deal more settled on 16in wheels than 18-inchers.

This wasn't an issue 20 years ago. The E39-generation BMW 5 Series, known for its excellent dynamics at the time, featured 15in or 16in wheels in many specs; 18in wheels were only reserved for large 4x4s, supercars or the most sporting variants, unless you fitted them yourself. Now you can get them on a boggo Volkswagen Volkswagen Polo from the factory.

Unlike, say, fiddly infotainment or even a lacklustre powertrain, a poor ride isn't something that annoys you a few times on every journey. On lumpy British Tarmac, it's all-consuming for every mile covered; I simply can't ignore it or tune it out. It can make or break a car, in my view.

It’s a well-worn subject, I’m aware, and we can’t lay all of the blame with manufacturers when it’s what buyers supposedly want. But why must moving up to a higher spec almost always mean larger-diameter wheels, adding road noise, reducing ride comfort, adding expense to tyre replacement and, in many cases, reducing fuel economy?

This is a plea to buyers, then. By all means spec those lovely, easily kerbed alloys with liquorice-thin rubbed draped around them.  The trade-off might be worth it, in your eyes. But try the specs with smaller wheels, too. It could transform the car.

Got to please everybody...?

Yes, yes you have, we all want different things from our daily ride, I guess we go through or driving lives in  cars we want to drive quick and as we get olde we slow down, want a bit more comfort and so on, when your young with your first car you see your mates modding there cars maybe, putting on bigger wheels, body kits, even swapping out engines for more power, and what were they like to drive?, they had zero comfort,knock a filling out if you ran over a tiny pebble and you accepted it because you didn’t care as long as it went round the bend flat and you looked cool doing it, as you get older, maybe get married your car choice has to change, maybe because your starting a family you need a bigger roomier car,a back seat for your kids, economy matters, then when your older you want comfort, speed doesn’t matter in a sense, we all moan about our Roads and so on, so, as someone said, what Tyres you put on your Car is your choice these days, not all cars come with low profile 18” plus wheels and tyres.

Objectivity be damned, well started then

Long ago there was an earnest magazine called Performance Car. Although this was the 80s and the height of body-kitted awfulness they tried to be objective regarding dynamics. Today, Autocar seems to have raised itself very high in terms of writing but there's surely an opportunity to measure some of these secondary ride characteristics?

There must be a way to calibrate equipment, like that old magazine, to measure dynamics beyond skid-pan G-forces like American magazines, or lap times. Jaguar, like Lotus, seem to have a way about their product in days past where they could be almost refreshing to drive because of soft damping and modestly hard springs. Couldn't Autocar step in here and start measuring the effects of these absurd 18" wheel options and ghastly thin sidewalls? I'd be willing to bet a suspension engineer could step in here and tell us to what extent sidewall compression contributes to hide/handling and comfort trade-off. The, maybe someone (anyone) could do a tear-down of a three-year-old car on standard wheels and tyres vs their blinged out Nurburgring-aping optioned car?

If you want a modern car that

If you want a modern car that is comfortable try a 2 series Active tourer SE on 16" rims the car is actually fun and relaxing to drive down a British B road sort of like a modern day 405, in fact it probably feels more "French" than most French cars on sale now. I now prefer being loaned one over the X3 they normally loan out or the X1 I normally drive.