BACK TO ALL OPINION BLOGS
Currently reading: Testing Lamborghini's Aventador LP700-4 Roadster
UP NEXT
Opinion: If you can't stage the Monte properly, don't stage it at all

There’s nowhere else to put it, so my smartphone must careen between my legs with each hard-charged corner. Why not put it in a pocket? Because I want it to record sound, the noise in question emerging – torrenting is more like it – from one of the Lamborghini Aventador LP700-4 Roadster’s best features. Which is a drop-down rear window.

Lower this – by pushing its controlling rocker switch upwards, perversely – and you have a front seat audience with 552bhp’s worth of 6.5-litre Lamborghini V12. Of course, you could remove the roof, but the Italian sky is sluicing rain in much the same way as it has been here, so the Aventador’s lid will remain locked down.

The reason for this damp, brief and thrilling drive is the need – well, desire – to sample this Lambo for the World Performance Car of the Year awards. I’m heading for the hills near a village called Zocca, and after 40 minutes of welcome acclimatisation at a speed more ordinary, trees start to replace buildings, and the road begins to snake. Tightly enough that second and third are all you need of the seven ratios through which you can paddle-shift.

So what do I hear when I hit play on my smartphone? The tensely energising, high-pitched whine of a potent Italian V12 at idle. The light, pulsing beat of accelerative promise. And when we get going, the sometimes uneven crescendo of an engine that can’t put enough power down. That’s no surprise given its rampant torque, the rain-sheened road and the tightness of these curves. But what’s impressive is how well-behaved and manageable this Aventador is.

Thank four-wheel drive, gargantuan tyres and a finely calibrated traction control system for that, the Lambo vaulting ahead only when it has the grip to advance without slithering. Turn the first stage of the ESP off with Sport and you can exit a bend at an angle, although it’s only slight. Which is probably wise, given how much Aventador there is behind you.

Faster roads offer the chance for less tentative V12 proddings. This is a car that can kick you to 62mph in three seconds dead, and the rush of scenery when you sink its surprisingly short-travel accelerator would be like falling through the air were it not for the V12’s magnificently frenzied hammerings. Before you know it you’re backing off, not because the car can’t handle it, but because you’ll encounter impediments. Light fear might even be one of them.

Like all good supercars, this is not a beast that you’ll master in five hours, five days or even five months. There are deep layers to its abilities, vast amounts of power with which to probe them and much to learn.

One subtlety is the way you can ease a gear into play with the smoothness of a raspberry sinking into double cream if you play the accelerator right. Or you can have it bang home with an exhilarating surge. You’ll eventually learn to spot the camber changes that get the Aventador’s nose darting. And most exhilaratingly of all, discover just how much grip it actually has.

I can do none of these things now of course, but I do have a recording of this Aventador’s V12. It’s a slightly rubbish recording in truth, but I confess to having played it a lot more than once. 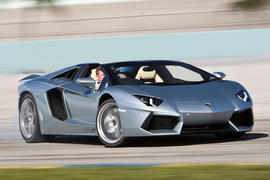 pedantic g*t alert - Were you in a Gallardo by any chance? Shouldn't an Aventador have 690 bhp +?