BACK TO ALL OPINION BLOGS
Currently reading: How I fell in love with cars: Steve Cropley
UP NEXT
Opinion: Vandoorne back on form as Formula E hit Monaco

How I fell in love with cars: Steve Cropley

Decent cars were rare where I was brought up, in a thriving but dusty mining town in outback Australia called Broken Hill. Durability was the order: people who wanted reliability drove tough old Yankee pick-ups; new car owners chose tough, Australian-made, GM-inspired Holdens and the surprising number of people sentimental links to “the old country” chose Austins and Morrises — and watched them fall apart.

My family’s self-imported, English-made Ford Consul always needed a rebuild after our annual two-week trip to the seaside, a dusty, car-busting 750-mile round trip. Lucky it was simply engineered.

Car life changed for me, and for a lot of other latent car lovers, when the 1955 Redex Round Australia Trial came to town. Round Australia trials had started a couple of years early but by 1955 they were national front-page news, generating amazing pictures and newsreel footage, relieving the grind of the postwar austerity and reassuring every impecunious Aussie of his perceived national characteristics: boldness, resourcefulness, disdain for authority and an ability to mend anything with a pair of pliers and a yard of fencing wire.

My old man and his friends got seriously excited when the 1955 trial — the longest ever at 10,500 miles over 21 days — was routed through The Hill. I was only a little kid but I vividly remember the way everything in the town stopped dead. That, and the sheer, bewildering number of different cars.

The event was supported by nearly every car manufacturer, and seeing that field made me suddenly aware that there were so many of them and that they were so different — everything from the mighty Ford V8 (winner in ’54) to the Morrises Oxford and Minor, the Vanguard Spacemaster, various Chevys and even the Renault 4CV. It dawned on me that people had favourites, so I developed favourites. Mine were always cars with fastback styling: Peugeot 203, VW Beetle, Ford V8 Beetleback and a few others. 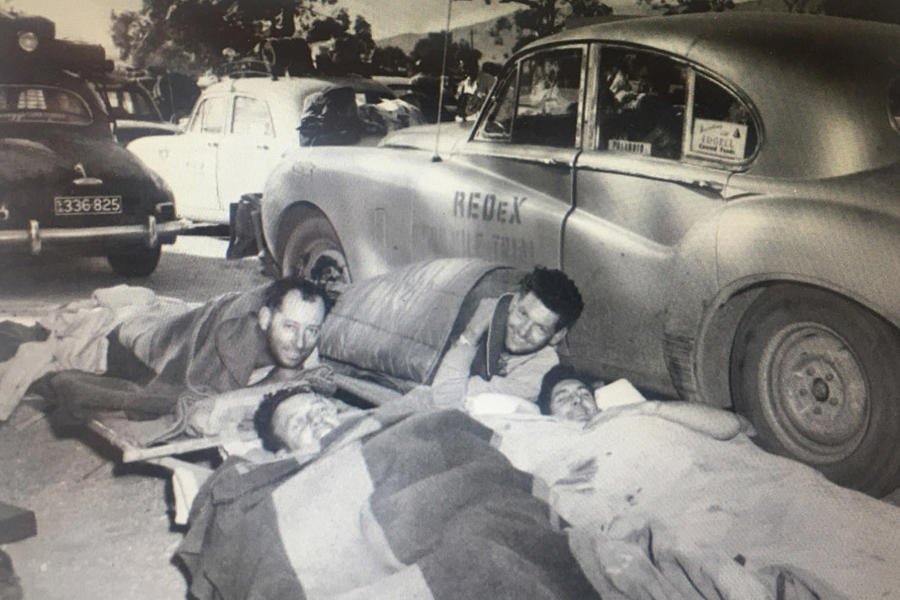 The winner that year was a VW1200. In fact, Beetles won five of the nine events staged in the postwar heyday of Round Australia trials because of their compactness, air cooling, traction and unparalleled build quality — all reasons why I’ve never lost my regard for that car. The fact that the first car I ever drove, a few years later, was a 1956 flat-screen VW Beetle only increased the favouritism.

However, the stark truth is that my love for everything automotive grew from what happened on one day in early September 1955, when the Redex Trial came to town. After that I couldn’t get enough of cars. Still can’t.

Always find it surprising that

SC or GG did not return to Australia at some point, through sentimental longing for home. In the 1970s all I could get my hands on was Daily Mail/Express? annual motor show guides or Parkers guide then a small price guide full of tiny text on car new and used prices, I could remember most second hand car prices as a 7 year old. Remember the ~1976 Earls Court Motor show after pestering to attend and seeing the William Towns Lagonda.

How I fell in love with Steve Cropley

I must stop looking at headlines on a small phone screen!!!