BACK TO ALL OPINION BLOGS
Currently reading: How I fell in love with cars: Richard Bremner
UP NEXT
Matt Prior: New Solterra signals Subaru's return

What first drew Bremner to cars is something of a mystery. Matchbox toys and car mags stoked the fire, though
Open gallery
Close
Share story

It must have turned a bit tedious after a while. As a toddler, whenever my mum took me shopping I’d ask her to identify any car that I didn’t already know. She had to do the identifying because I was a long way from reaching a cat-sat-on-the-mat level of reading, so there was little hope of my understanding the often rakishly italicised script of a Sunbeam Rapier or a Ford Consul Classic.

“Cars were the only thing you were interested in – goodness knows why,” she recalls. The “goodness knows” was because there was no-one remotely mechanically minded in my immediate family, my father a French teacher who would eventually specialise in the 18th century French philosopher Denis Diderot, while my mother, brother and step-mother were all teachers and lecturers.

So the interest must have been baffling. But it was duly fed with Matchbox toys, rides in the family car to induce sleep and inspecting the vehicles of assorted relatives. Less tolerated was the habit of humming my way through gear changes when out walking.

None of the cars owned by relatives was of particular interest – that’s me in my Aunty Edna’s Ford Anglia – and our family cars would be considered grim today. The first, which I don’t remember but rode in after I was born, was a Jowett saloon. A wannabe Morris Eight but with twin cylinders rather than four, its stout hill-climbing ability befitted a car manufactured close to the Pennines. My parents called it Flicker, “FLK” being part of its numberplate; I don’t know whether this was also because it took a part-time approach to starting. 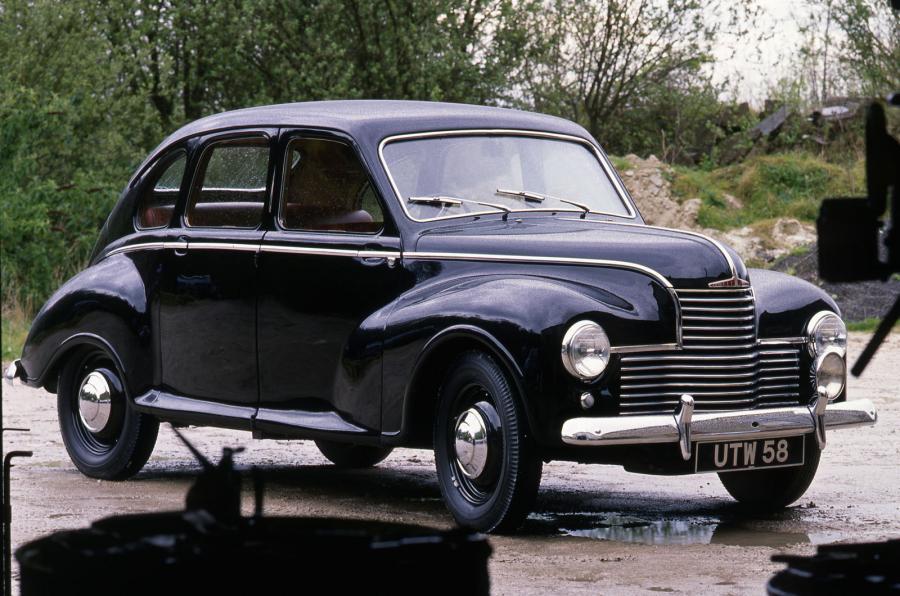 The Jowett was followed by a Triumph Mayflower, an ungainly little car that pretended to be more important than it was – a feature of many a British car of the 1950s – with its tall grille and stuntedly flowing wings. The Mayflower I do remember riding in, particularly in the savage winter of 1963 when it brought us back from Devon to Surrey across Britain’s snowy wastes.

Neither of these troubled machines would do much to inspire a love of cars, but I was already a goner. Car magazines were being devoured by the time I was 10, and my Dad generously taught me to drive in the Sudanese desert when I was 14 – we lived in Khartoum – the generosity, I now realize, revolving around the fact that our 1964 Mazda 600 was a fragile little flower that had already suffered half-a-lifetime of back-street bodgery.

Later came employment with British Leyland, the supply of car-fuelled experiences intensifying towards headiness when I joined Motor Magazine. And the disease continues unabated today, as a 10-strong car collection confirms.

How I fell in love with cars: Andrew Frankel

How I fell in love with cars: Matt Prior

I still recall clearly the day I went on the bus with my dad, to go and collect our Ford Anglia 105E. The Ford Prefect it was replacing had sadly been consigned to the scrap heap due to extensive chassis corrosion. The 105E had wonderful American influence with its rear fins and sloped backed rear window. I was however slightly disappointed that the lever on the dash that stated “Hood” only opened the bonnet and did not fold back the roof!

I met Richard Bremner in a bar years ago with a bunch of auto journalists and liked the guy. My day job wasn't in PR or anything like that so it was a surprise, and fun, to meet the people I'd read each week.

Then, years later I was talking to the MD of a British car company that wanted to recruit me. As a backhanded compliment, he said, "You know almost as much about our cars' history as Richard Bremner." I'm sure I know a lot less, so I'm sure he was being unfair to Richard; it's nice to see where his passion started.

Keep at it, Richard.

My Sisters Husband had one when they met, it even had wheel covers that looked like Minilite Alloys, it was White with a Black stripe down the sides!