BACK TO ALL OPINION BLOGS
Currently reading: Racing lines: What W Series means for women racers
UP NEXT
Opinion: Why the Festival of the Unexceptional is an annual highlight

Is segregation really the best means to rocket a female into Formula 1? There were plenty who said otherwise when W Series (see what they did there?) was launched last autumn. The all-female, one-make single-seater series kicks off next month and it’ll draw attention and contention in equal measure.

Devised by, among others, David Coulthard and Adrian Newey, the series is well intentioned. Unlike stick-and-ball sports, women can compete with men in motorsport, but still there’s a depressing lack of numbers and opportunity. W Series could change that.

A rigorous selection process led to 18 women being hand-picked to compete in the six-round series, which begins at Hockenheim on 3/4 May and ends at Brands Hatch on 10/11 August. Among them are five Brits, including Jamie Chadwick, 20, who last year became the first woman to win a Formula 3 race. Her profile is growing on merit, so surely she has the most to lose.

“You could say that, but I also have the most to gain,” she counters. “When I was looking at my options for this year, the new FIA F3 series wasn’t one of them because it’s €800,000 to €1 million for a season.” 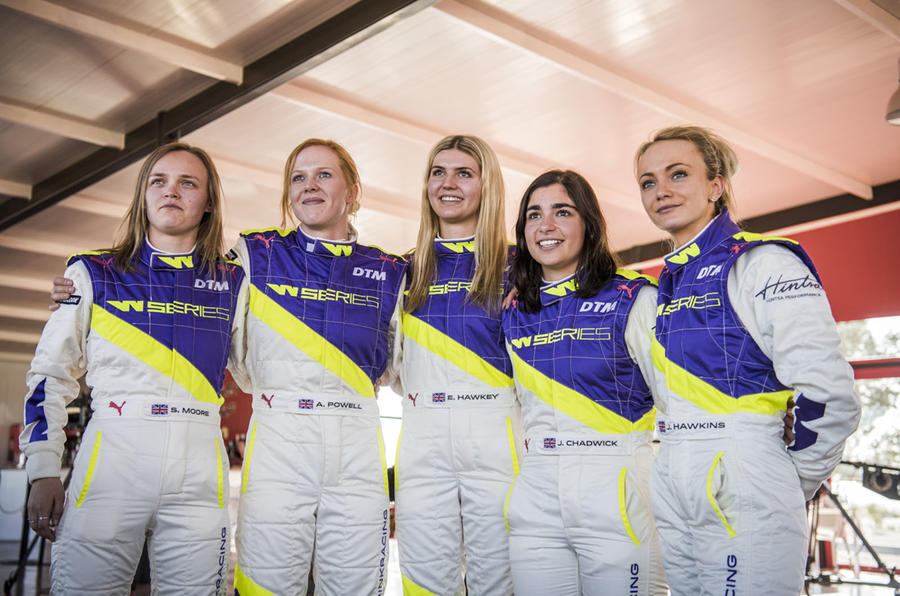 “I’ll be open, initially the idea of racing just women wasn’t of interest,” she says. “It sounded like an awful idea. But the opportunity W Series provides is far greater than anything else. It isn’t all about the money: it’s for top F3 cars on great circuits and with the support you get, I don’t think I could turn it down.”

Coulthard and co have certainly chosen the right car to challenge their drivers. The Tatuus T-318 F3 is state of the art and powered by a 1.8-litre four-cylinder turbo, pushing 270bhp through a six-speed sequential ’box. Serious kit.

“It’s not about segregation, it’s about supporting female talent to the top,” says Chadwick. “Okay, there could have been other ways of doing it but, in terms of getting 18 girls racing in F3 cars, this was the only way.”

Her message to critics is wait and see. If a graduate springboards to a higher level – and perhaps even F1 – W Series will have justified its existence.

On track in a Formula 3 car at Silverstone​

Jolyon Palmer: how to improve Formula 1 for 2019

Well, judging by the few minutes coverage it got on Ch4 F1 Show, there wasn’t exactly a huge crowd in the stands on the main straight, anyone see this as a problem?, don’t get me wrong, I want W Racing to succeed, but, it’s going to need a heck of a lot more support.......

Very amusing.  Why don't we

Very amusing.  Why don't we have an awards 'thing' just for women?  Hey, that's a good idea!  Then it can ONLY be won by a woman!

Wow, what a level of crass stupidity we have reached.

I’m all for it, but, the glass ceiling thing kicks in here, there’s just not enough interest in Women’s sports in general, take Football for instance, the England ladies team are ranked way higher than the men’s, yet, when a World Cup game is on the telly and they show you a view from a drone, there’s hardly any supporters there, and invariably the voices in the crowd shouting are kids!! I’m not being sexist here, but Women’s sport will never be supported like Men’s sports are, I’d like to be wrong about this, but I’m just being objective.....

Not a great comparison, Peter. Football relies heavily on strength and fitness. Women's football is demonstrably much poorer to watch than men's. Women's cricket, on the other hand, is often good as cricket relies on skill and strategy more than strength. Anybody can drive a car, woman or man, so it really doesn't matter who's driving.

I think the FIA need to stop pretending racing is a real sport. They need to decide if it is entertainment or a test bed for technology, or both (entertainment is the best bet, IMO), and specify a few series accordingly. There is clearly insufficient interest in the myriad racing series currently running.

Has anybody else ever seen the sad, sad display that is a drifting 'competition'?

I thought all physical sports depe on strength and fitness?, can you or I jump into an F1 Car and drive for two hours at speeds of 200mph and withstand cornering speeds of 5G?, this maybe the contributing factors as to why men’s an Women’s sports don’t cross, but, I agree equal parity.