BACK TO ALL OPINION BLOGS
Currently reading: Why Rossi's retirement is a landmark motorsport moment
UP NEXT
Opinion: Is stripped-down BMW M4 CSL worth the weight?

Why Rossi's retirement is a landmark motorsport moment

MotoGP champion has had an incredible career, on four wheels as well as two
Open gallery
Close

The long-anticipated retirement of 42-year-old MotoGP veteran and legend Valentino Rossi – announced in a special press conference at the Red Bull Ring yesterday – will end a career as famous for the rider’s dominance of this riskiest of all motorsport codes as for the swashbuckling, wisecracking demeanour he brought to the job.

Rossi has won 89 races from his 363 starts in the premier motorcycle racing class so far, but plans to enter the eight or nine MotoGP events remaining this season, riding for the satellite Petronas Yamaha SRT team. This is the first time since he began racing 500cc bikes that Rossi hasn’t had full factory backing.

Rossi won the first of his seven world championships in 2001, subsequently scoring two more for Honda, then four for Yamaha. He has raced at the top far longer than any other rider of modern times, winning his last race in 2017 but still considered competitive in 2018, when he was 'robbed' in a couple of events. His last podium was in 2020, the highlight of a difficult season. 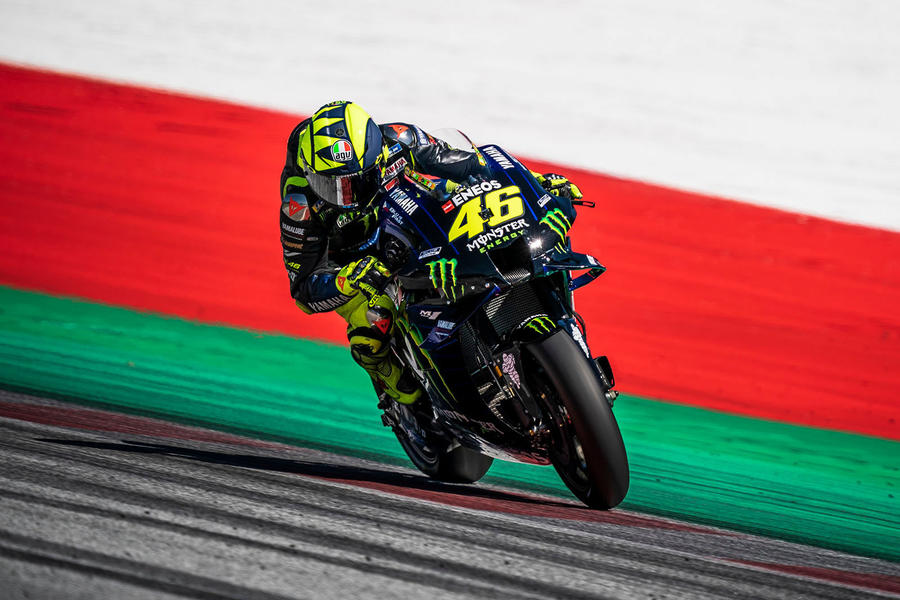 Although Rossi’s latest press conference was understandably downbeat, he spoke with the same candour he has always employed. “I can’t complain about my career,” he told the rapt audience. “It was a long journey that I enjoyed very much.”

Rossi is also famous for having tested Ferrari Formula 1 cars on a number of occasions between 2004 and 2010, his performance good enough to feed stories about a plan to 'do a Surtees' and change from two wheels to four. He memorably lapped the Fiorano test track 0.7sec slower than Ferrari”s team leader of the time, Michael Schumacher, who remarked: “I didn’t give him any advice, because he didn’t need it.”

Toying with journalists covering the story, Rossi remarked that he didn’t enjoy being famous because it was “like a prison”, and driving for Ferrari would just make the situation worse.

Although remarkable, Rossi’s MotoGP record shines an even brighter spotlight on the unearthly achievements of F1’s (and Britain’s) own Lewis Hamilton, currently bidding for his eighth world championship. He has so far won 99 grands prix from 276 starts, eclipsing even Rossi’s remarkable strike rate. Meanwhile 'The Doctor', as Rossi has always been known, is hinting at a plan to try competitive enduro riding. You can’t keep a good champ down.

The wildest ride: on the back of a MotoGP racer

I actually suspect this is like the 'retirement' of Loeb - not a retirement - just a move elsewhere. Loeb, didn't retire after leaving the WRC full time - he moved to the WTCC & World RX...and is still doing Dakar and Rallye Raid....

I expect to see Rossi in GT/Sportscar racing......

I a sure Rossi has been the GOAT in the top of Motorbike racing. Even if people may argue about it, the following is not urguable:

The Doctor is the best ever comedian on two wheels and the best ever bike rider of all comedians. After his retirement I will watch motogp only occasionally, if at all. The show will be less interesting and much less entertaining.

The man was a genius on a bike,he had his own riding style,you could never count him out winni a race, but, I guess,there comes a time when you want to slow your life down, Sabastian Loeb retired at that top,he had nothing left to prove,well, that's Rossi's legacy, maybe Hamilton will be a gentleman and retire?