Question: how many grands prix has Aston Martin F1 started? Your four options are: 0, 5, 38 or 535. Any ideas? Well, here’s the thing: all four answers are correct. Sort of. Confused? Me too. Let me explain.

We’ll start with zero. Aston Martin is one of two ‘new’ teams on the 2021 grid, so this year’s opening race will be its first. Except the answer could also be five, because Aston Martin ran a works team in five races in 1959 and 1960 (it failed to qualify for a sixth).

Perhaps they don’t count, given that Aston team is entirely unrelated to the new one. The new Aston is a rebrand of Racing Point – so you could argue the answer is 38, the number of races the team contested in that form.

Mind you, Racing Point was founded in 2018 when Lawrence Stroll bought the assets of Force India when it went into administration. While F1 bosses ruled that Force India’s entry wasn’t transferable, Racing Point was essentially the same team running from the same Silverstone factory. And that team’s history goes back through short-lived identities as Spyker and Midland to the Jordan team that entered F1 in 1991. And that Jordan/Midland/Spyker/Force India/Racing Point/Aston Martin team has contested a total of 535 races.

So, all four are legitimate answers. Confusing, eh? 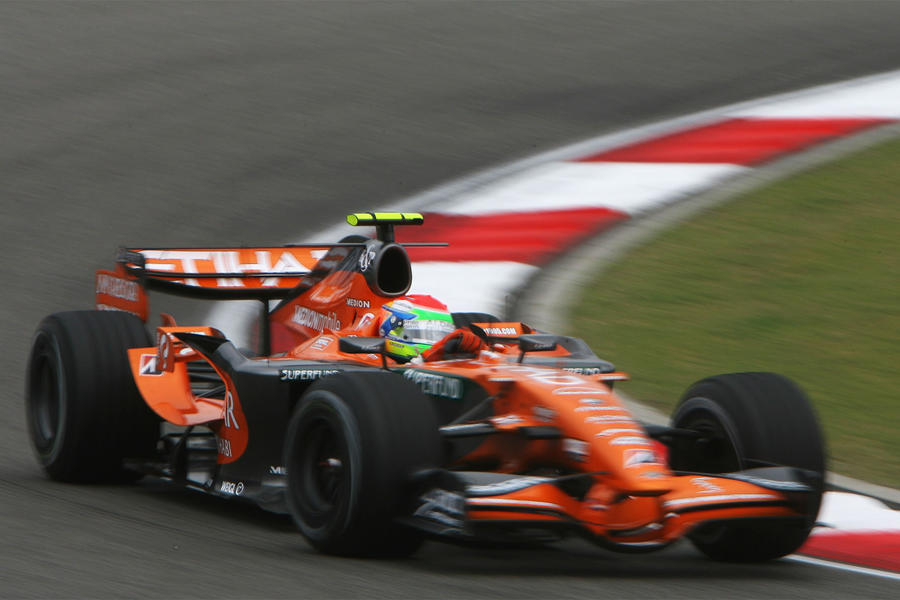 Many F1 teams have changed hands or rebranded multiple times, and their histories have become somewhat confusing. Does Alfa Romeo Racing’s history go through the Sauber squad that runs it, or the unrelated Alfa team that won the first two F1 championships?

Consider another 2021 ‘newcomer’: is Alpine F1 a new outfit or a continuation of Renault F1? That team, often referred to as Team Enstone, is an extreme example: since it was founded in 1981, it has been named Toleman, Benetton, Renault, Lotus F1 (and within that variously Lotus Racing, Team Lotus and Lotus F1 Team), Renault (again) and now Alpine.

At one level, this is all inconsequential. Except that F1 is a sport with a deep, rich history, but one being muddied by all these team changes. For example, the 2020 record books show that AlphaTauri won its first race in its first season. Except that the same team (which began life as Minardi) previously won a race when called Toro Rosso. So if Aston Martin takes a shock win this season, will the team celebrate like it’s their first, given Racing Point’s Sakhir Grand Prix victory last year?

Still, the messed-up history does offer some amusing quirks. Here’s one: Mercedes-AMG F1 was created in 2010 when the manufacturer purchased the 2009 title-winning Brawn GP outfit. That team was born from the old Honda F1 team, which began life in 1999 as BAR. But it goes back further: BAR bought the F1 entry slot of Tyrrell Racing, which first competed in 1968 and won three drivers’ titles with Jackie Stewart.

And while BAR set up an entirely new team, for legal reasons it kept Tyrrell’s registration with Companies House. The company number, 00787446, is still used by Mercedes-AMG F1 – a fragment of rich heritage in a sport that doesn’t seem to know what to do with it.

Can anyone tell me what eventually happened to the Toleman team?

Possibly answering my own question.

Has it evolved via Benneton to Renault became Lotus became Renault and now is Alpine?

if so what became of the original Renault F1 team that had Rene Arnout and Patrick Depaillier as drivers?

It's amusing that Ken Tyrrell's team is still the dominant one, 50 years later!

Totally agree! This is in part due to the restrictions on new entrants that will evenutually kill F1! F1 was at the most vibrant when there were too many entrants. It is now the opposite way and has massive barriers to new teams. F1 is dying, and I don't feel sad, despite being a massive follower since the 70s. This is related the problem with Grand Prix racing. It is not attracting new enthusiasts, but is turning away the old supporters. For example, the engines don't sound good, although they have no technogical relevance, or any other benefit, but are expensive. The only thing stopping F1 being the most irrelevant is the stupid complications in Formula E (Fanboost being the worst).

Me and my brother-in-law were the two biggest F1 supporters I know. He doesn't watch the races any more, and I often don't bother (despite him being the one who visited an F1 team base most recently).

There are no F1 fans here, on this web page, has to be, whenever there's a rare article written on here, hardly anybody posts on it, and, if they do, it's nearly always derisory, there's an F1 article on here, it's been there about three days, two f you count this one, and just two posters have responded with any opinion, then again, I think it would be the same for any motorsport in this Country.

si73 12 February 2021
I'm an F1 fan and enjoyed this article, it confirmed stuff I thought I knew and told me stuff I didn't, but I had and have nothing to add, so didn't post. I only post if I think I have something of relevance to say, or in reaction to another posters comments. I am sure I am not alone. So, just because there are few posts, doesn't mean the article isn't read or appreciated.
View all comments (4)