BACK TO ALL OPINION BLOGS
Currently reading: Are shape-changing cars the future?
UP NEXT
Opinion: M3 Touring always was BMW’s inexplicably missing model

Are shape-changing cars the future?

Suzuki unveiled the Waku SPO concept at the Tokyo motor show, where it instantly stood out for its retro, compact design and having a touch of the Honda e about it.

But it had a far more interesting feature: the ability to morph into different body shapes. The Waku has a boxy estate style, yet while chatting to the car’s designer on stage, someone pressed a button somewhere, and it changed into a coupé.

It’s a novel idea, if perhaps a little flawed in execution. There wasn’t enough time to ask about the storage solution, but the way the estate’s roofline drops down into the boot space suggests that storage for the family may be non-existent.

Still, this is just a concept and there are no plans for production – although Ogisu said he’d like to see details such as the side-view cameras, headlights and front grille make it onto other Suzukis.

The front of the car and the digital screens inside are two more elements that can change on the Waku concept. For example, Ogisu said the headlights can be swapped depending on a driver’s preference. Such changes seem far more feasible than the coupé/estate idea since they involve software rather than hardware.

But nonetheless, the idea of shape-altering vehicles is an interesting one, given two opposing themes in the car industry: boxy, autonomous vehicles created for comfort and space, and true driver’s cars that remain engaging behind the wheel.

The idea of a model that could combine the two – relying on some very clever engineers being able to resolve the obvious issues (weight and safety, for starters) – would solve many a modern-car dilemma.

All the news from Tokyo motor show 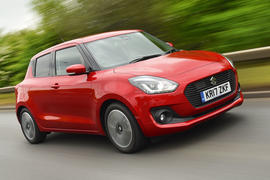 Not really a novel idea

The concept of having a single car that can be 'morphed' into various body styles is not really new; for instance, the 90s Mercedes' Vario Research Concept could be an estate, coupe, convertible, or pick-up (albeit the conversion had to be done manually). In the case of this Suzuki concept, I'm not sure the difference between the 'wagon' and 'coupe' body styles is that substantial to warrant the extra complexity/cost/weight tbh

Didn't the old Citroen Pluriel try to combine hatch , pickup, convertible and cabriolet. Not a commercial success , mainly due to poor quality execution of the roof, but  a lot more attractive than this attempt