BACK TO ALL OPINION BLOGS
Currently reading: Why the world needs cars like the McLaren Senna GTR
UP NEXT
Matt Prior: How soon is too soon to call it a day in motor racing?

Why the world needs cars like the McLaren Senna GTR

Just 75 Senna GTRs will be made, but it’s a crucial car that every automotive enthusiast should celebrate
Share
Close
Share story

The morning has barely begun, but has McLaren just stolen the biggest headlines of the Geneva motor show with the reveal of the Senna GTR concept?

After a poke around this most extreme of cars, I have to say it is jaw-dropping, even if it is not as beautiful as the P1 or F1 that have carried the standard for McLaren in the past. I’ve no quibbles with that, either: the fastest McLaren ever it may be, but nobody is promoting it as the successor to either of the aforementioned icons.

Most striking are the front splitter and rear diffuser, which look scarcely credible and would be barred from any racing championship, but which McLaren has been able to exploit on account of the car being essentially a track-day special.

These addenda are incredible not just for their sheer size, but also because you could quite reasonably point at them and say “not even an F1 car has that kind of tech on it”. For an owner, I imagine that kind of wide-eyed brag is really quite appealing. For the watching world - and I suspect a legion of excitable kids and young adults - it’s the sort of thing that makes you stick a poster on your wall (or download it as a screensaver, or whatever they do these days).

Combined with the giant rear wing and the brutal, no-holds-barred design language of the standard Senna, it makes for a car that is striking in every sense. Like the road-going version, it won’t be to everyone’s tastes, but it is undeniably purposeful.

It is also, in many regards, unique. For McLaren to label the Senna GTR as the fastest thing on a track bar a Formula 1 car is quite a striking claim, and one that should bring to mind comparisons with the Aston Martin Valkyrie and Mercedes-AMG Project One. And yet, at £1 million (plus taxes), the Senna represents something of a bargain compared with those two.

It is also, McLaren personnel promise, being conceived as a car that can run at a track day without the need for any technical assistance. As one member of the management team said: “An owner might want someone to change their tyres for them, but there’s no reason why they won’t be able to do it themselves.”

Some will certainly point out that the Senna GTR is an anachronism in the modern world, a hedonistic shout back to an era that is passing. They may have a point: there are elements of the car and its concept that are off-script for today’s world.

But from my perspective, this is a car that should be celebrated, for showing that outrageous performance can still be desirable, and for engaging the enthusiasm of countless car fans. McLaren occupies a niche of the automotive landscape, and I’m delighted that it is comfortable enough to express what it stands for in such an uncompromising manner.

For now, others can deliver electric hatchbacks and autonomous pods; McLaren has always aimed for the top in whichever direction it has looked, and the Senna GTR has all the hallmarks of hitting that target. 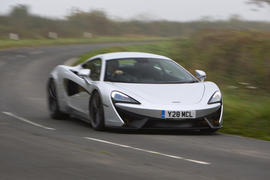 Why is the Senna GTR being described as if it's the first of its kind and setting a template for track-day cars based on hypercars? We've been here before with many other hypercar-based specials, the Senna GTR is not unique. Yes the Senna GTR looks amazing and will no doubt go like stink but lets get our feet down back on the old terra firma.

I'm still surprised by the claims that only a F1 car is faster around a track. Otherwise the Senna GTR is faster then than a LMP1H sports-prototype like the Toyota TS050, a multi-million pound high tech purpose built racing car that is packed with technology that possibly even outdoes a Formula One car and pumps out 1000bhp in a package that weighs less than the Senna GTR. It's even faster than a IndyCar too then.

Even lighting McQueen could beat this?!

It's not only anachronistic,

It's not only anachronistic, it's superfluous. How much do you need beyond a 720S or the Pista?

Put it this way, if you had the money to buy just about anything you fancy and you decided to fulfil your fantasy and buy a Supercar, what would you have and why?, be careful how you answer...!!!