BACK TO ALL OPINION BLOGS
Currently reading: The Toyota-Mazda tie-in is good news for car buyers
UP NEXT
Matt Prior: Thoughts on the 2021 Car of the Year award

The Toyota-Mazda tie-in is good news for car buyers

Tie-ups and partnerships within the motor industry are nothing new, but in recent times they’ve certainly become more important.

There’s the Renault-Nissan Alliance, PSA Peugeot-Citroën (and by extension, the DS brand, too) and of course the Volkswagen Group, which seems to have turned commonly shared parts and platforms into an art form.

So it’s little surprise, then, to see Toyota increasing its technical partnership with Mazda. To many, the logical flow of information - at least for the forseeable future - will focus around Toyota’s plug-in hybrid and hydrogen fuel cell technology, in return for Mazda’s efficient Skyactiv engines.

For customers, the news is about as good as it comes. It means you’ll finally be able to buy a hybrid Mazda in the not too distant future. Although the company has been trying to develop its own electrification methods for some time now, it appears to have lacked the resources to ‘go it alone’ and so needs a larger partner.

Good, too, is the thought of a Toyota (and, by extension, a Lexus) powered by one of Mazda’s Skyactiv engines, although quite how BMW - Toyota’s other technical partner and a key supplier of its diesel engines - feels about that is unknown.

The bigger picture, though, is that Toyota is branching out and working more closely with other vehicle manufacturers rather than keeping its best tech to itself - something company boss Akio Toyoda has reportedly been keen to do for a long time.

The benefits to both companies further down the line are clear, too, as with shared technology and vehicle development costs comes shared economies of scale, which could eventually help to drive down the cost of plug-in hybrid and EV technology across both product ranges.

I’ll be watching to see when the first fruits of the new partnership begin to develop, but given the prevalence of hybrid vehicle tech in Toyota’s current line-up - and the fact that the fuel cell-powered Mirai is due to launch in the UK this summer - my bet would be sooner rather than later. 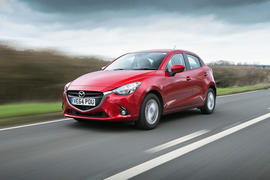 The Mazda 2 name dates back to 2002. This latest version showcases the firm's Skyactiv technology and 'Kodo' styling

Bullfinch, Einarbb,It's not a company merger, just a tech share

Both companies will remain completely independant of each other. Mazda needs hybrid tech to bring their average CO2 across their range down even further to survive as an independent manufacturer and this is the most cost effective route for them. They have already run Mazda 3 protoypes fitted with Prius batteries and electric motors recently.
Toyota on the other would most likely want to reduce the cost of sourcing diesel (and poss petrol) engines and what better way to do that, than to source locally as opposed to importing from Europe.
Einarbb 19 May 2015

Mazda does have a slightly different rep...

...it could thus become bit like Kia/Hyundai. Both aimed at the public. But different enough not to steel to much sales from one other. The net combined being greater.
Bullfinch 18 May 2015

'It means you’ll finally be able to buy a hybrid Mazda in the not too distant future.' <-- what the world's been waiting for. Notwithstanding Toyota's preference so far for organic growth over BMW-Rover or Mercedes-Chrysler style shenanigans, Isn't the truth that Mazda is too small to survive alone and having proved not quite interesting enough to Ford during its Jaguar-Aston-Volvo buying phase it has now been thrown a lifeline by its fellow countrymen? Much as one liked the RX-7 (and to a lesser degree the 323 Turbo 4x4) it is hard to see much in Mazda's parts store which Toyota really needs.
View all comments (6)