BACK TO ALL OPINION BLOGS
Currently reading: New Range Rover reveal: full report from flagship's debut
UP NEXT
Steve Cropley: The EV6 might be Kia's crowning achievement

It wasn’t as big an event as they’ve staged in the past, and all the better for it. There were few surprises about the running order, either: canapés and bubbly among the celebs in the foyer from 7:30, then we all filed into the theatre at 8:30 (your seating depended on the colour of your wristband) and sat briefly through a musical intro and drum roll before CEO Thierry Bolloré stepped onto the stage for a brief intro. Refreshingly, he neither tried to embrace Britishness (leaving that to the car) or to claim any credit for the creation of a vehicle that’s been six or seven years in the making. Instead, he made warm remarks about the creators of a genre of vehicle he’s admired almost all his life.

Group creative director Gerry McGovern stepped out to do his usual: defining modern luxury for us in case we hadn’t heard it before. In fairness, some hadn’t. Then the first of two covered cars was dramatically unveiled – and despite the fact that we thought we knew what to expect, the effect was dramatic. 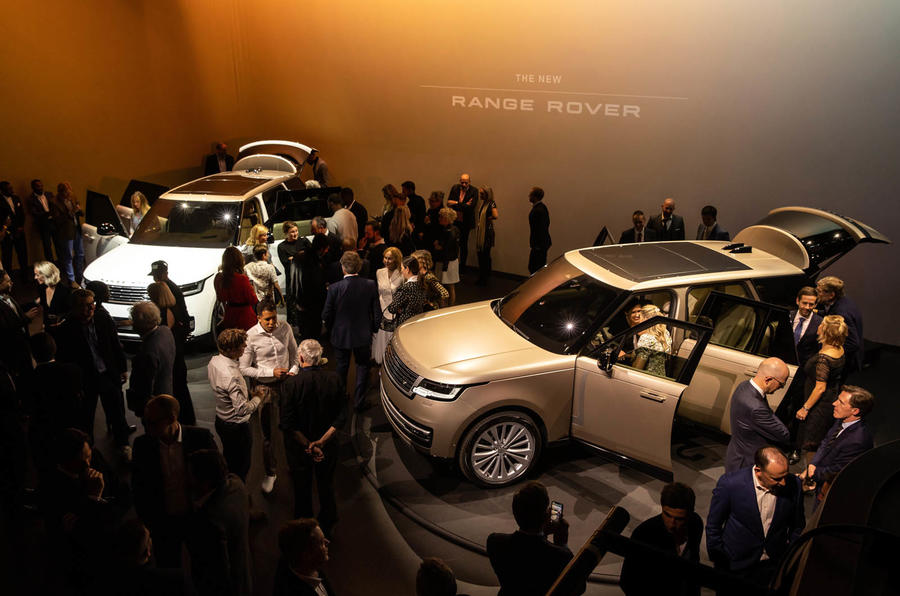 This new Range Rover, at least viewed from where I was, is a truly magnificent thing. The outgoing model had all the same major characteristics – falling roofline, rising belt, floating roof, clamshell bonnet, a total absence of fussy styling – but this new one is just better by an enormous margin. Then the sportier SV was unveiled, a great thing as well, but I couldn’t take my eyes off the classic model.

There was an interesting run-through of technical highlights by Lennard Hoornik, JLR’s chief commercial officer, which made it quite clear that JLR intends to fight Bentley on level ground for upper-end luxury SUV sales. The fact that there is to be a pure-electric Range Rover by 2024, plus news that the impending PHEV Range Rover’s battery will take it 62 miles on a charge, drew applause from the knowledgeable audience.

However, McGovern’s main point – that desirability is the Range Rover’s most important ingredient for success – is something we overwhelmingly agreed, looking at the part-familiar, wholly uplifting lines of this entirely new car.

A quote McGovern produced from Coco Chanel, “luxury lies not in the richness of things but in the absence of vulgarity”, seemed entirely appropriate. I’m absolutely positive I wasn’t the only person in this approving audience puzzling over how the hell they could afford this wonderful new British car.

"I’m absolutely positive I wasn’t the only person in this approving audience puzzling over how the hell they could afford this wonderful new British car."

From all I've seen and read about the new Range Rover I'm thinking the same, does anybody on here know anybody needing a new kidney?

I assume that by "vulgarity" Gerry was referencing the sheer ugliness of the Bentley and Rolls SUVs.

I dislike off white or cream interiors as much as I dislike black wheels, so current tastes in automotive design do nothing for me.

But I had a quick play on the Land Rover configurator last night, and in darker hues or with the cloth option the cabin looks sensational. I'd imagine the exterior looks a bigger step ahead of the current one on the road too. I think they've nailed it.

I do think Land Rover are right to play rhe understated Luxury card, the quote from Coco Channel was perfect.