BACK TO ALL OPINION BLOGS
Currently reading: Autocar writers' cars of 2020: Toyota Yaris
UP NEXT
Matt Prior: Sometimes being a car journalist is a pain in the back

No, not that Yaris. Lawrence Allan says the refreshingly capable hybrid supermini is his motoring highlight of the past 12 months
Share
Open gallery
Close
Share story

First, a confession: if I was to name my ‘best’ car of 2020 based on its staggering technical ability, immense desirability and complete driving experience, it would be the Porsche Taycan. But we - and I - have sung its praises on so many occasions now that it felt right to extol the virtues of something less obvious. The new Toyota Yaris Hybrid.

Yes, my colleague Matt Saunders has already waxed lyrical about a Yaris, but that’s the epic-sounding (and mechanically unrelated) GR I’ve yet to experience. Rather, the humble standard Yaris deserves merit as being the most improved mainstream model over its predecessor that I can recall in recent times.

Frankly, I firmly disliked the old Yaris Hybrid. It had its positives, but it was white goods transport that only really excelled around town. Unremarkable ride and handling, a dreary cabin and an oddly MPV-like feel and driving position meant it was pretty far from the class best. But it was the powertrain – that constantly droning four-cylinder engine combined with elastic-band CVT revving and a wearisome lack of pace – that made longer journeys and spirited, out-of-town driving quite unpleasant. 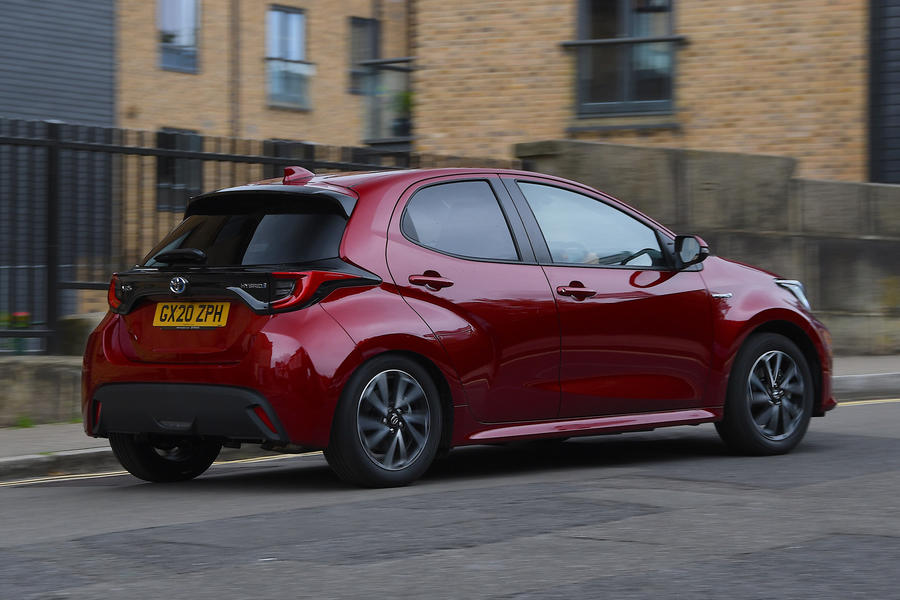 The new car doesn’t totally rewrite the formula, but Toyota seems to have realised that somebody paying well over £20k for a supermini might want to use it outside city limits. It’s more frugal and has better EV range in urban use, but on the open road, it’s a bit of a revelation. The new platform, wider track, less upright body and lower seating position mean there’s a genuinely capable (and fun) chassis underneath, and its predecessor's lacklustre design and (to a lesser extent) cabin have been brought right up to date.

Ditching the Atkinson-cycle four-cylinder motor for a three-cylinder was an inspired choice, too. It’s more powerful and torquier, and feels like it doesn’t have to work as hard just to keep up with the general traffic flow. Not only is it generally quieter, too, the sound no longer conjures up images of a dying farmyard animal when you clog it and the revs soar. It's enjoyable anywhere, not just in town.

Yes, a Fiesta is still the class driver's choice. But you expect a Fiesta to be good. The standard Yaris has spent years offering nothing whatsoever to titilate the interested driver. That it can now appeal to 'us' while still pleasing its traditional customer base is cause for celebration, and gives me hope for the electrified future.

Mazda to launch own version of new Toyota Yaris by 2023 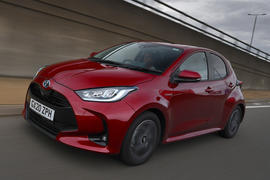 The 1.5 hybrid, has a 79bhp electric motor to give a combined total of 114bhp, so the petrol engine is in effect only producing 35bhp, not exactly impressive is it..

The Apprentice 3 January 2021
But the electrical power for the 79bhp motor is being generated by the engine, which is actually a 90bhp unit. The electric motor is powerful enough to drive the car when possible by itself from battery with the engine shutdown.

Thanks to the clever power splitting drive technology, peak power will be largely via direct engine drive with a top up from battery power and the electric motor.

In principle this could lead to reduced max power of only 90bhp if you are constantly on full throttle, in practice such driving doesn't exist except on a banked race circuit!, any time its not on full throttle or regenerative braking, spare electrical generation will quickly rebuild charge in the battery ready for the next full power demand.
(the engine can run faster than the cars road speed would need so as to channel extra power into electrical generation instead of the wheels)

I wanted to like this car, after being a satisifed Yaris owner twice over in the past, but the new model has too many flaws for me.

The styling, whilst suiting the GR-4 version, looks awkward on lesser versions, and once again the pointless rear upward tick robs the cabin of visibility whilst looking even more awkward. Specify anything less than 17 inch alloys and those bulbous rear arches make the wheels look like castors.

The boot is small by class standards and the rear bench is cramped (I was always impressed with the spaciousness of both the versions of the Yaris I had despite their small footprints) along with the ride being a bit jittery.

But the biggest thing that rules it out for me is the price - £20,000 for an entry level supermini is just plain obscene - they're not the only ones taking the mickey with their prices, but I'll take my money to those who aren't.

For me the changes move Yaris away from the pensioner brigade and into a much more youthful audience. Personally I like it, and running costs including residual value are exceptional. It would be foolish to only focus on purchase price; unless of course you're one of the aforementioned pensioners that may not be around to see the superior second hand value.

Such a shame some people can't express opinions without generalising, being aggressive, childish and insulting.

What's wrong with being practical as well as good to drive? Other cars manage to achieve that. And have you seen how odd the entry-level Yaris (costing £20,000) looks compared to top spec versions (I didn't say I didn't like the styling of all trim levels but thanks for jumping to more negative conclusions).

And yes, let's pay more and more and more for cars - that makes so much sense as an argument for the benefit of the consumer. Maybe some people have been suckered into accepting huge list prices hidden behind monthly payment finance packages, but I can't remember ever enjoying chucking money down the drain (by paying a huge amount more for cars that cost thousands more than they did just a short time ago - even for models other than the Yaris that haven't changed much).

I agree with your comments about the styling;  I've rather liked Toyota's recent efforts, especially the C-HR and Corolla, but the Yaris is disappointing for the reasons you cite.  It's verging on the ugly.

These writer suggestions are very bizarre. The Yaris is nominated because it is a bit better than the last one, just still not up with the best on any parameter. How does that even make sense?

I get the Fiesta and the MX-5, even the Bentley and the McLaren, though they are so far out of reach of 95% of your readers, but the boggo Yaris hybrid? No way.