From £26,3858
Scandi-cool compact SUV gets its most powerful petrol engine yet, plus some software upgrades courtesy of Polestar
Open gallery
Close

The XC40 is comfortably the Swedish brand’s second most popular model, with more than 32,000 cars finding homes worldwide in the first half of 2019. It is second only to the larger Volvo XC60, and us Brits can’t get enough of them.

It may be no stranger to these pages, but this particular model carries two badges that single it out as something less familiar. The first, T5, signifies the presence of the most potent petrol engine currently in the line-up: a turbo four-pot developing 247bhp and 258lb ft of torque, which is enough to propel the near-1650kg SUV to 62mph in 6.5 seconds.

It’s the second, Polestar Engineered, that requires greater explanation. Unlike past Volvos, which received Polestar performance versions, the sub-brand now exists as its own entity and is focused more on bespoke EVs, as well as the hybrid super-coupé Polestar 1.

But that’s not to say Polestar’s development team are so busy they can’t turn their hands to making Volvo’s mainstream products a little more exciting. Enter Polestar Engineered Optimisation, an optional upgrade available for all-wheel-drive versions of the XC40, as well as the Volvo S60 and Volvo S90 saloons and Volvo V60 and Volvo V90 estates.

Essentially a software tweak that overwrites the car’s Dynamic driving mode, it ups the amount of torque sent to the rear wheels to create a sportier, rear-driven feel. Throttle response is also sharpened and the 8-speed automatic gearbox allowed to hold onto its cogs for longer before upshifting.

The £745 option can be fitted by a dealer post-purchase, and retains the car’s original warranty. It was fitted to our test car along with the improved Intellisafe Pro pack, which adds steering assistance to its blind spot detection system for the first time, letting the car swerve if it drifts into the path of a potential collision.

All in, options boost the price some £4000 to £42,880, which is knocking on the door of a sensibly-specced Range Rover Evoque P250 and the Audi Q3, though only the Range Rover can claim styling anywhere near as distinctive as the Volvo’s Scandinavian influenced looks. 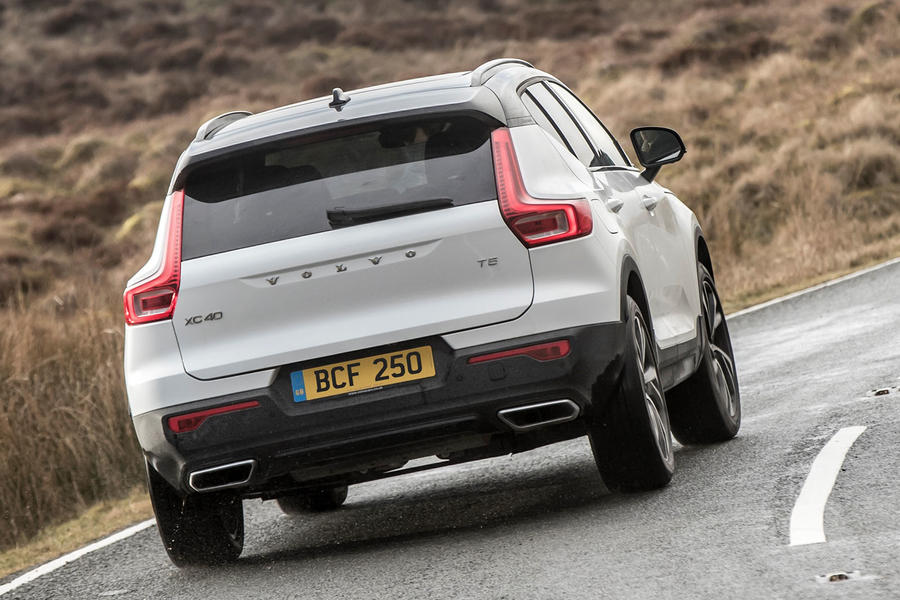 As refined and relaxing to drive as any other XC40 in its standard Comfort drive mode, even on the 20in wheels and stiffened suspension that come fitted to R-Design models as standard. Polestar’s optimisations only appear when shifting into Dynamic, now renamed Polestar mode, or disengaging the electronic stability controls completely.

Once you do, the more rear-biased power distribution can be felt right away. Turn-in feels tauter and the car feels pushed rather than pulled through corners. You can even tease out some oversteer with relatively little effort, although while in Polestar mode traction control still kicks in a little sooner than you’d expect. Steering remains light throughout, lacking the feeling of a precise connection to the front wheels, though it does weight up with pace.

The throttle reacts much faster to your foot here, with a greater sense of mid-range urgency helping the car feel more responsive when overtaking. In its most powerful configuration the 2.0-litre is suitably swift, with the kind of straightline pace that could bother some hot hatchbacks, although it doesn’t sound particularly engaging at high revs. Peak torque is long gone before you hit the 6500rpm redline.

Although manual gear changes are slightly faster in this mode, the eight-speed automatic can still feel reluctant to react to each pull of the steering wheel-mounted paddle shifters. Better to leave the car to it for the most part, only upshifting when you no longer need to maintain the higher end of the rev range.

Beyond the renamed entry on the drive mode selection screen, there's no other visual evidence of Polestar engineering - but seeing how the XC40 has one of the best interiors in its class, that's no bad thing. It remains airy and sophisticated, with the 9.0in, portrait-oriented Sensus touchscreen dominating the centre of the dash. It contains the majority of the climate controls as well as all the infotainment, but does a better job of ditching physical buttons than most rivals. 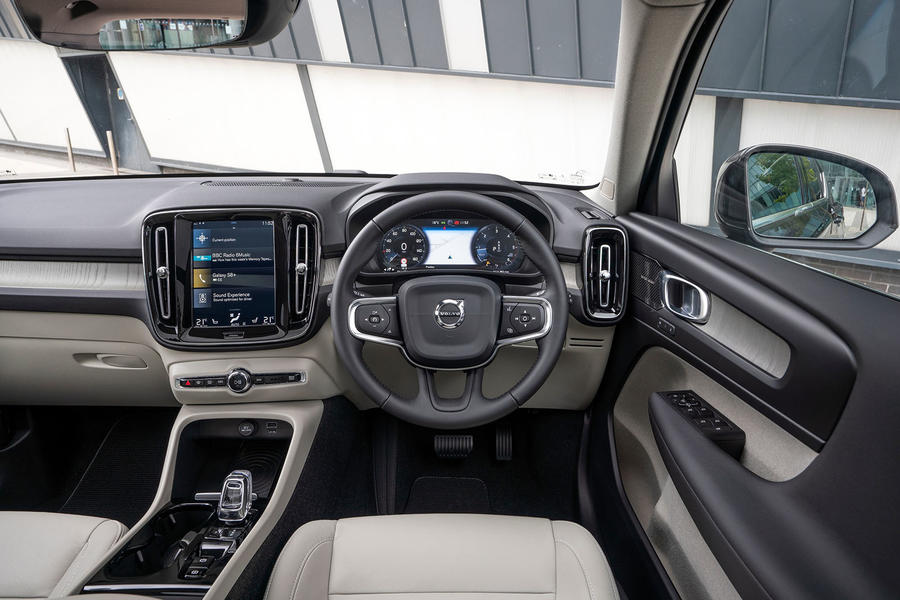 The change in character brought about by the Polestar optimisations isn’t quite a Jekyll and Hyde transformation, stopping short of turning the XC40 into a true driver’s car but adding a level of engagement that was previously missing from the otherwise sedate SUV.

It’s a welcome addition, then, though one that will likely be lost on much of Volvo’s typical XC40 customer base. Less impressive is the T5 engine’s disappointing, sub-30mpg cruising economy, which is quite the stick to counteract the uprated performance carrot.

With Polestar upgrades not currently available for the less thirsty T4 petrol engine, that leaves the diesel-powered D4 as the likely sweet spot for anyone after an economical drive as well as a more dynamic one. 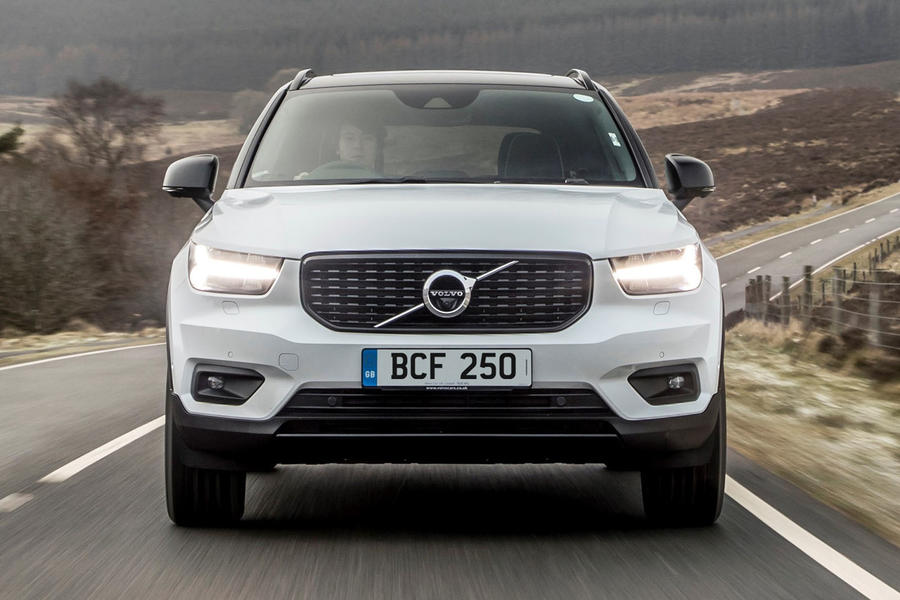 my XC40 T5 sits around 28.6mpg at the moment at 4000 miles, with a good amount of motorway driving. So if the polestar makes it worse then I don't know why I'd bother unless I wanted to Jeff Capes it and pull it everywhere

...shown are from an Inscription. R Design only all black, which is fine - sporty! But also only with awful (imo) cheap looking Op-Art decor strips I just didn't want to look at every day. Shame but with that and who knows what digital tracking those Chinese owners have installed we passed....

Shame but with that and who knows what digital tracking those Chinese owners have installed we passed....

Do you wear a tinfoil hat as well, to stop aliens reading your mind?

Shame but with that and who knows what digital tracking those Chinese owners have installed we passed....

Do you wear a tinfoil hat as well, to stop aliens reading your mind?

Ooer can they do that?

The war on diesel!

So thanks to the rather misguided war on Diesel engines we are now ending up with cars that are rather thirsty (at least in the real world) and produce significantly more C02 than their diesel counterparts!
View all comments (6)