It’s hard to shake the feeling that the car posing the biggest threat to the new Volvo XC40 P8 comes from within Volvo parent, the Geely Group, itself.

The Swedish manufacturer’s first fully electric production model is effectively a Polestar 2 in a Volvo XC40-shaped frock; and in P8 guise – currently the only variant of this new Volvo that’s available in the UK – the two cars are extremely close when it comes to on-paper specification.

Considering they share the same CMA architecture, the same 75kWh (usable capacity) battery and the same electric motors (one at each axle for all-wheel drive), that alignment is unsurprising. Both cars are good for 402bhp and 487lb ft, and the Polestar can hit 62mph from rest in 4.7sec, the Volvo in a not dissimilar 4.9sec.

There’s a bit more of a difference when it comes to range, though: the Polestar’s 292-mile claim outstrips the Volvo’s 257-mile rating. Given the Polestar is actually 10kg heavier than the electric XC40, it seems this difference is down to the boxy Volvo SUV simply having a tougher time pushing through the air than its lower-slung Geely Group stablemate. 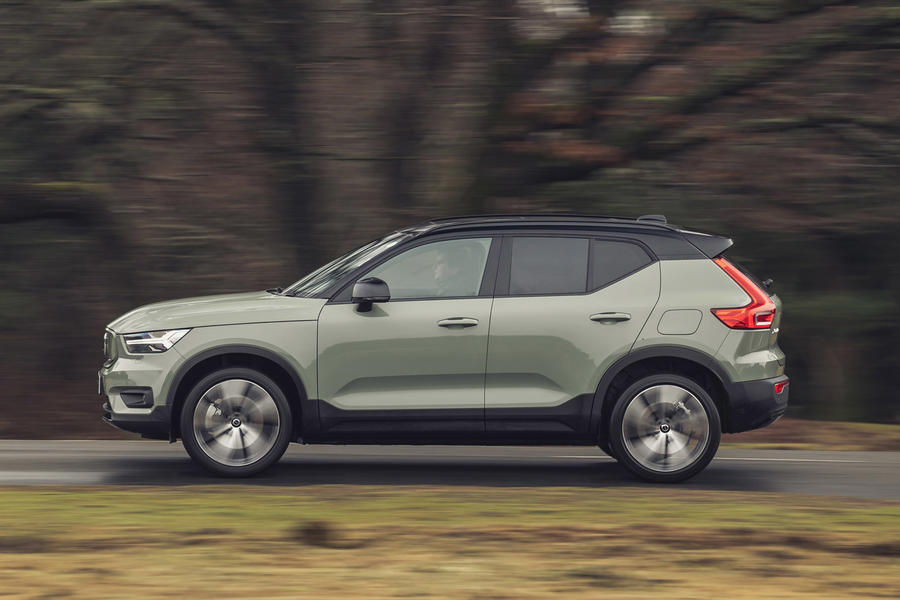 Interestingly, the XC40 feels the heavier car on the road, too. This is due to its looser body control. Step on the throttle and not only will you experience a fairly alarming level of acceleration, but you’ll also notice how markedly it squats down on its haunches. It’s a similar story under heavy braking, only with the car’s mass thrown forwards.

It leans hard during cornering, and on rolling stretches of road there’s a fair amount of bouncing movement. That up-and-down travel, which actually lends the Volvo a nice sense of pliancy through dips, is accompanied by a chatty secondary ride as well. You feel almost every lump or bump you roll over, even if the impacts are rounded off smartly.

Combined with the car’s absurd pace and seats that lack proper lateral support for your torso but are still quite firm, it makes the XC40 P8’s dynamic character feel a bit of a muddle. The soft sponginess that could potentially make it a comfortable cruiser is undone by the fussy secondary ride and the uncomfortable chairs.

Meanwhile, the pronounced lateral roll and mute, lightweight steering dilute the sense of athleticism its pace and high mechanical grip levels might have otherwise instilled. Admittedly, the Polestar isn’t the most engaging or rewarding fast EV, but it makes a lot more dynamic sense than the Volvo.

“Ah, but the XC40 will be more practical,” you say. Hmm, I’m not so sure. Both have impressively spacious cabins, with more than enough room for four adults to travel in comfort. Yes, the XC40 has more luggage space (a 452-litre boot and a 31-litre frunk), but the Polestar doesn’t lag too far behind (405 litres plus another 35 in its nose). Then there’s the whole luxo appeal side of the coin. The XC40 is snazzy, but the Polestar looks and feels even posher. 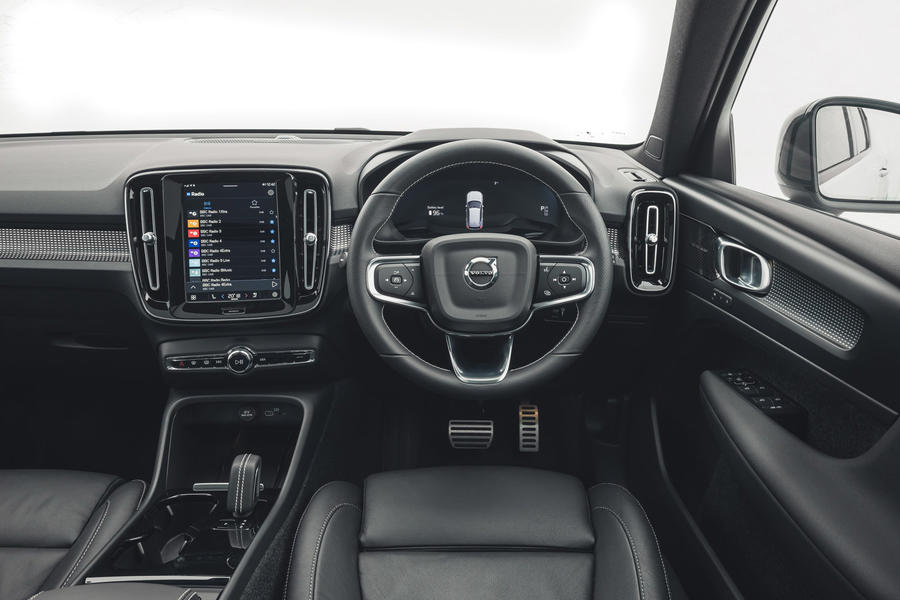 So surely the Polestar is pricier. Well, sort of. Cheaper, lower-powered versions of the electric XC40 will arrive in due course, but the car we tested has a list price of £60,005. That’s just over £5200 more than a very nicely optioned Polestar.

Of course, hardly anyone will actually pay that sum. Volvo says 95% of XC40 EV customers use its Care by Volvo subscription service, where a three-year, 30,000-mile contract with no deposit is £649 per month, or £23,364 in total. On a three-year PCP deal with the same mileage, a Polestar will cost £536 per month, but you’ll have to pay £6752 up front as well.

So the Volvo is a bit cheaper that way. Of the two, however, I’d still go for the dynamically superior Polestar. 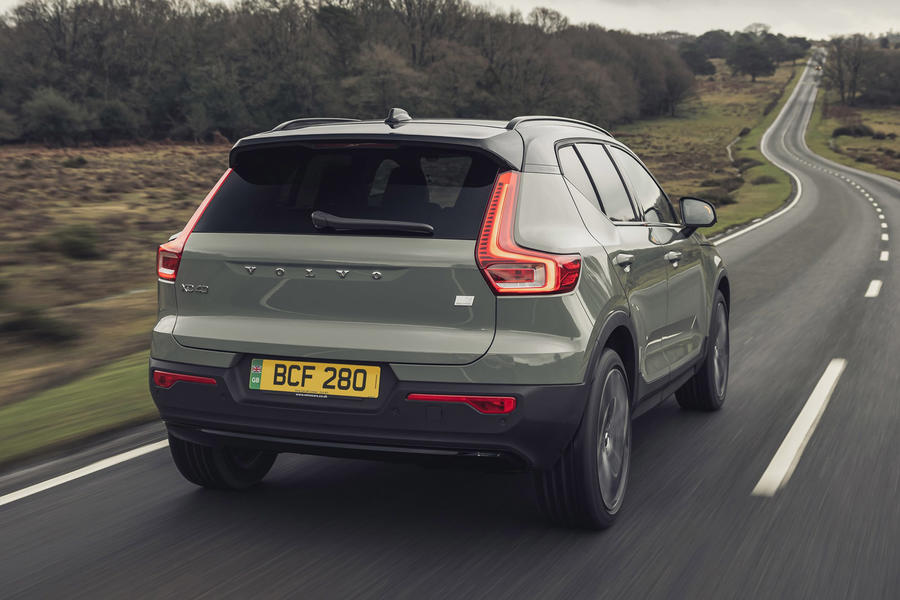 Log in or register to post comments
Nickktod 29 March 2021
How bad would it need to be to get less than three and a half stars?
Overdrive 30 March 2021

How bad would it need to be to get less than three and a half stars?

Overdrive 30 March 2021
No idea why my first comment didn't post properly. Joys of the Autocar comments software, I guess.

Anyway, I agree. The review reads like a two star car. I guess testers hold smet brands ib more affection than others, and Volvo seems to be one of those!

That's what I thought.

Do people really pay that much each month for a car?

That £649 also includes tax, servicing, tyres, no deposit and you can cancel anytime and of course no depreciation.  So when you compare what any mid size new car costs to buy and run it's actually not bad! So do the maths on your own car (assuming you don't drive an 14 year old £1,000 Fiesta that you service yourself)

That £649 also includes tax, servicing, tyres, no deposit and you can cancel anytime and of course no depreciation.  So when you compare what any mid size new car costs to buy and run it's actually not bad! So do the maths on your own car (assuming you don't drive an 14 year old £1,000 Fiesta that you service yourself)

You do the maths, bit of an unnesscary insult. You forgot something I'm pretty sure you are limited to around 7000 miles a year, so that 8k a year is not quite so good now.  Oh tax is nothing, and you would not need any tyres either, so please do the maths again.

I really don't like screens in cars. Big ones in the middle that replace tactile controls are more dangerous than said controls. When I adjust my heating/AC I can do it by muscle memory and touch - I know where the necessary controls are and when I grip the control with my fingers and turn to the left or right, I can feel the knob rotating - all without taking my eyes from the road.

When I have to do it with a screen, I need to make sure that I'm on the heating screen, then try to find the increment/decrement options and then carry out the necessary commands and I may have to glance at the screen to carry this out.

Then we have the screens that replace the dials. I’m sorry, the traditional dials make up an essential part of a cars look and feel. It’s part of the cabin jewellery and each car has a different look and feel. From the excitement of a Porsche to the clarity of a Mercedes/BMW/Audi. They look good with the ignition off and on. Not so with a screen. A flat plane of screen, with no character that is just a dark rectangle when the ignition is off.

Call me old-fashioned but it’s the same reason why I prefer an analogue watch (or even a Casio digital) to smart watch. And my watch is just 7mmt thin, compared to 11mm (or more) for a Smart Watch.