I know, I know - beauty is in the eye of the beholder, and all that. But come on. Just look at it. Allow yourself a moment to soak in the sight of the new Volvo V90 R-Design. To these eyes, at least, a truly spectacular piece of car design. Even better, as the sportiest of the V90 range, the new R-Design model gets more styling swagger with 15mm lowered ride height, a gloss black grille and bumper finish, matt silver door mirrors and some sharp-looking 18in alloys. You also get part-electric contour sports seats with leather and nubuck upholstery, amongst other jazzed-up interior bits.

Those springs haven’t just been shortened, they’ve been stiffened, too, and R-Design also gets different dampers to the rest of the range; passive monotube ones that deliver compression and rebound damping via a single valve. Adaptive dampers with rear air suspension can be added for £1500 which replaces the lowered sports suspension. 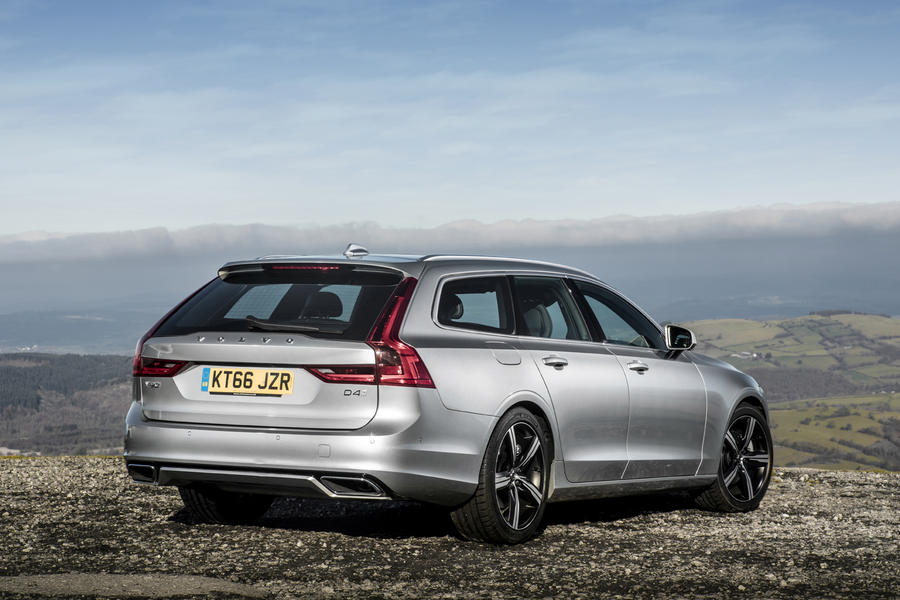 Our D4 test car (the more potent, four-wheel drive D5 model is also offered in R-Design trim) came without the adaptive suspension, which it turns out is an unfortunate omission. Well, unfortunate for us since we had a rather uncomfortable test drive, but fortunate for you, dear reader, as we can tell you without doubt that you should avoid the R-Design suspension.

Sure, speed humps and other smooth-edged intrusions are shrugged off easily, but hit a recessed drain cover or pothole and the V90 shivers, thumps and heaves in a very uncouth and frankly un-Volvo fashion. It does soak up higher-frequency surface imperfections fairly well, and it’s a fine motorway cruiser, but it’s disappointing on B-roads and in urban stuff, regardless of speed.

The silver lining is that the stumpier springs have inevitably reduced the pitch and wallow that we noted up as a moderate criticism in the standard V90, and turn-in feels a touch more incisive, too. Even so, the R-Design trim erodes the comfort of the standard V90 – one of its most appealing attributes – without offering enough of a gain in handling precision in return. 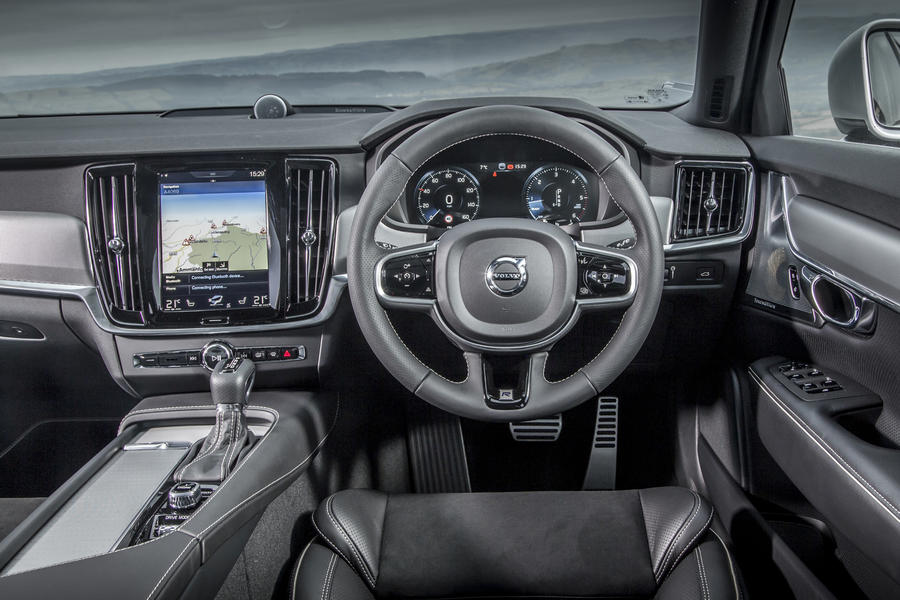 Not only that but those sports seats we mentioned? They’re a bit of a step backwards for the V90, too; harder than the standard seats, and the pronounced, non-adjustable side bolsters could make things a bit uncomfortable for broader-figured drivers.

Don’t get the wrong end of the stick here, we still really like the V90. In fact, it’s because we have so much affection for the standard Volvo V90 that the rather glaring flaws in the R-Design are so frustrating. The very essence of the V90’s appeal is its unashamedly cushy ride and wonderful driver’s position, both of which the R-Design compromises in the name of some sporting intent that it doesn’t quite live up to.

That doesn’t mean it’s without merit. Of course, it gets the same hearty yet progressive 2.0-litre diesel engine and smooth (if slightly hesitant on step-off) eight-speed auto. More to the point, the styling upgrades do rather enhance the dashing visage and are sure to win it plenty of buyers, just as S Line, AMG Line and M Sport trims are consistently big-selling trims in the Volvo’s Teutonic rivals.

R-Design also brings variable mood lighting inside, the excellent 12.3in LED driver’s display, metal-effect inlays, illuminated tread plates, sports pedals and LED fog lights with cornering function. It’s not a bad price next to rivals like the Mercedes E-Class Estate AMG Line, either. Even after you’ve added the air springs, it still undercuts the Merc by some £1500 despite having a more comprehensive equipment spec.

The Merc has a usefully bigger boot, mind, which is no small matter in the big estate stakes, so it’s very much a case of figuring out which of these worthy, plush wagons best suits your needs and wants. And that’s before you’ve thrown in the added confusion of the imminent new BMW 5 Series Touring. 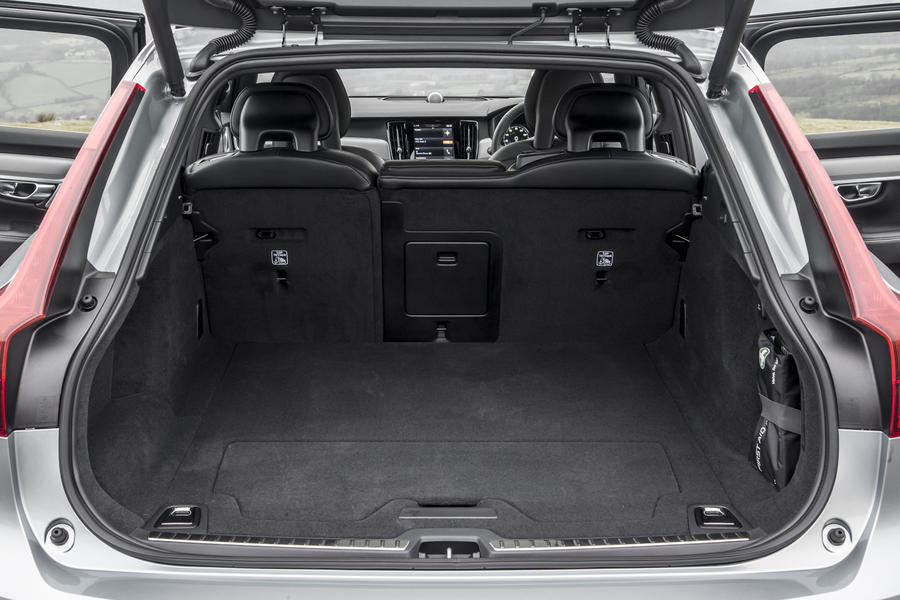 Clearly, it’s a shame that Volvo doesn’t offer the option of deselecting the sports suspension on R-Design trim in favour of the more comfortable set-up you get on Momentum or Inscription trims. But, if you’re determined to have the styling bits and you fit the sports seats, then sure.

Just add the air suspension or you’ll be buying an uncomfortable V90, which is a bit like buying an aggressive Labrador. Disappointing, to say the least, if not entirely missing the point. We’d save some money and go for the excellent Momentum model instead.

This is probably the version few people buy but given to car journalists to test drive because they constantly place handling over comfort.
Current hard riding cars have journalists to blame.

So this is Volvo's demise Autocar?

I recall only a few years ago the negative comments labelled towards Chinese ownership of Volvo by Autocar and the future styling of their cars, particularly when the Universe concept was unveiled, fearful for the company's future. How things have changed eh Autocar.
XLR8 6 February 2017

...but instead I picked a Skoda Superb Estate. More loadspace than a V90, all the stuff I need (I also went for cream leather and panoramic glass roof) and I think it's a handsome car.

At the end of the day it's an estate car so who honestly gives a sh*t about having "matt silver" door mirrors?!

At the end of the day it's an estate car so who honestly gives a sh*t about having "matt silver" door mirrors?!

Couldn't agree more, but unfortunately many do. Good choice on the Superb. On a side note, I saw an S90 on the motorway the other day and the rear looked really dull, the V90 is definitely the better looking of the two.