From £14,5108
The sixth-generation Polo is bigger and more refined than ever before. But how does it fare compared with the latest Ford Fiesta and Seat Ibiza?
Open gallery
Close

The sixth-generation Volkswagen Polo represents a big break from its predecessor. It has been conceived and developed anew from the ground up in a design and engineering programme with the mechanically identical new Seat Ibiza and upcoming fourth-generation Skoda Fabia, together with a production version of the company’s T-Cross Breeze compact SUV concept, and the Skoda Karoq and Seat Arona SUVs.

Based on the latest generation of the German car maker’s MQB platform architecture, specially adapted for the compact car class, the new Polo has grown significantly: it is 4053mm long, 1751mm wide and 1446mm high. That makes it 81mm longer, 63mm wider and 7mm lower than its predecessor. It has a wheelbase of 2564mm, 92mm longer than the previous model, while the track widths are up by 62mm at the front (to 1525mm) and 49mm at the rear (to 1505mm), giving it a considerably larger footprint. 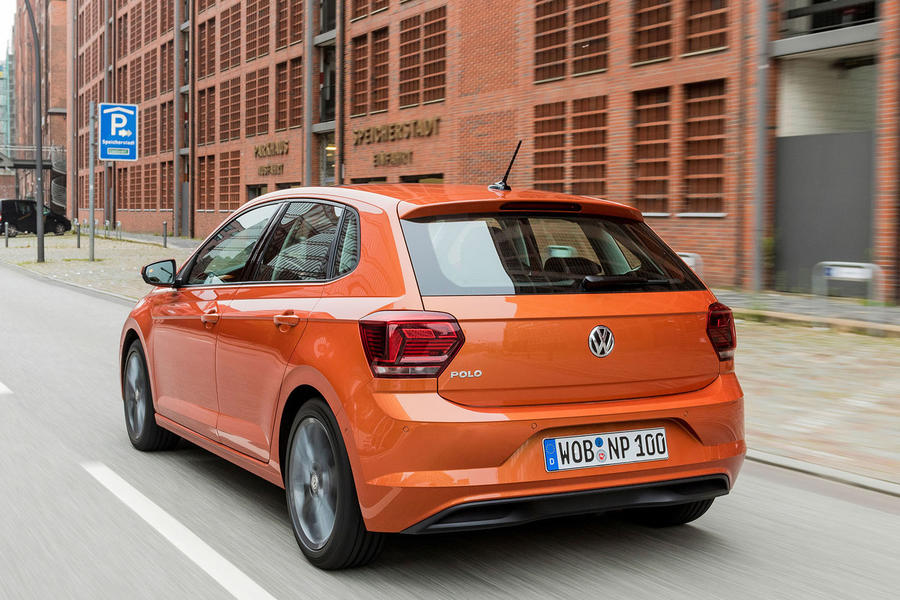 Set for UK deliveries in November, it will be produced in five-door hatchback form only; the three-door version has been consigned to the history books after a run of more than 42 years. Buyers are offered the choice of up to six engines in the launch line-up – the most powerful of which is the turbocharged 2.0-litre four-cylinder unit in the Polo GTi, which will enter production next year with 197bhp, which matches the Ford Fiesta ST.

There’s also a model running Volkswagen’s new turbocharged 1.5-litre four-cylinder petrol engine, producing 148bhp. Officials hint that it will likely come in 128bhp form at a later date. There is a single diesel engine, a turbocharged 1.6-litre four-cylinder unit with an SCR filter, offering either 80bhp or 95bhp. In selected markets, there’s also a new natural gas variant of the turbocharged 1.0-litre three-cylinder with 90bhp. The engines are mated to either a standard five- or six-speed manual or optional seven-speed dual clutch automatic. 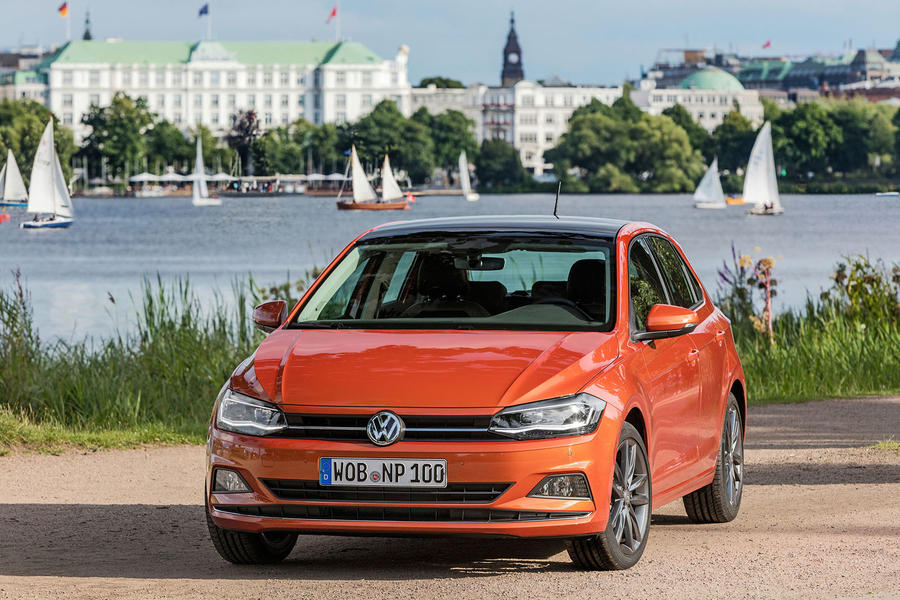 Grown up. That description applies well to the new Polo. As well as gaining in size, it has improved in other areas, not least refinement, which is now very much the best in its class. Upcoming comparison tests will reveal if the car can top rivals such as the latest Ford Fiesta, Renault Clio and Nissan Micra, as well as its sister Ibiza and Fabia models, for overall competency but, in isolation, it is a very convincing package that will appeal to a wide range of buyers.

It is a smart and thoroughly modern-looking car, with interesting proportions, crisp lines and a confident stance. The key exterior design feature is a double swage line that provides the flanks with a more defined shoulder line. The body is constructed to a level of quality that shames many compact car rivals, with thin panel gaps, well-integrated features and exacting tolerances. You expect this level of fit and finish in the premium car ranks, but it is not a given at this end of the market.

Inside, it delivers a nice balance between customary Volkswagen control simplicity and youthful design flare, with a contemporary-looking cabin dominated by a rather high-mounted dashboard. Available with a wide range of different trim elements and eight colour combinations, it features familiar analogue instruments and a 6.5in touchscreen as standard. VW’s 11.7in Active Info Display digital instrument system is available as an option, along with an 8.0in touchscreen. 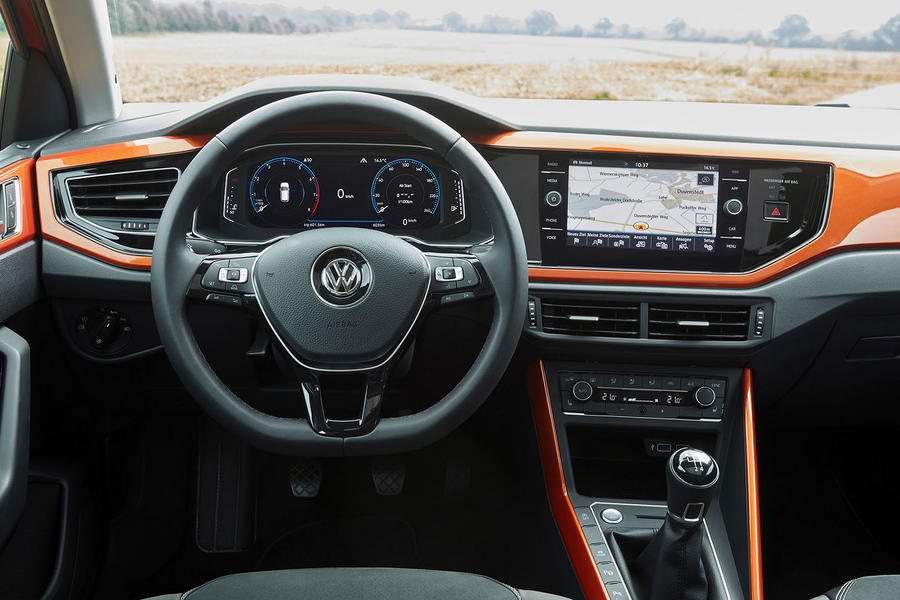 The dashboard materials, in the top section at least, are soft to touch, with expensive-looking texturing. The seats offer a wide range of adjustment and are supportive with firm cushioning and good side support. Drawing on technology already introduced on the Golf, the new Polo comes with VW’s Front Assist, City Emergency Braking and Pedestrian Monitoring systems, a tyre pressure monitoring function and a hill holder function as standard.

Overall vision is less impressive, hampered by the relatively heavy rake of the windscreen and prominent cowl of the instrument binnacle. That leaves a surprisingly narrow line of sight from the driver’s seat. The overall interior quality is also spoilt by some rather hard plastic surfaces, especially between the front seats within the centre console.

For a car billed as being conceived for the digital age, the lack of a USB port as standard in any of the three specification lines is a major oversight. Model hierarchy plays a role here, of course: too much equipment would push the Polo too close to the Golf, so Wolfsburg has consciously dumbed it down to keep a respectable distance to its larger sibling – while also making it more profitable.

The increase in external dimensions means there’s a greater feeling of space up front; the generous width of the footwells, improved shoulder room and excellent head room being particular strong points. Accommodation in the rear has also increased, although with a higher waistline and shallower rear window you feel a little more enclosed than before. The Polo can accommodate five at a pinch, though VW admits it has been conceived more for four. It also offers a significant 71 litres more luggage space than its predecessor, at 351 litres.

The maturity evident in other areas is manifested in excellent on-road qualities. Delivering 113bhp at 5000rpm, the 1.0 TSI is nippy in nature, delivering determined acceleration on a loaded throttle in lower ratios. There is a hint of low-end turbocharger lag off the line, although the interruption is only fleeting. Once spinning freely, the new engine is smooth and willing through the gears. With 129lb ft on tap from 2000rpm through to 3500rpm, it also boasts a nice flexible nature that sees it pull taller gear at low revs out on the open road without too much fuss. The suppression of engine noise and vibration is vastly improved over the old Polo.

The standard six-speed manual gearbox is light and easy to operate, although it is notchy and has a tendency to baulk when rushed through the gates. The optional seven-speed dual clutch unit provides automatic shifting, but is sometimes a little hesitant on downshifts. VW claims a 0-62mph time of 10.8sec and 116mph top speed. 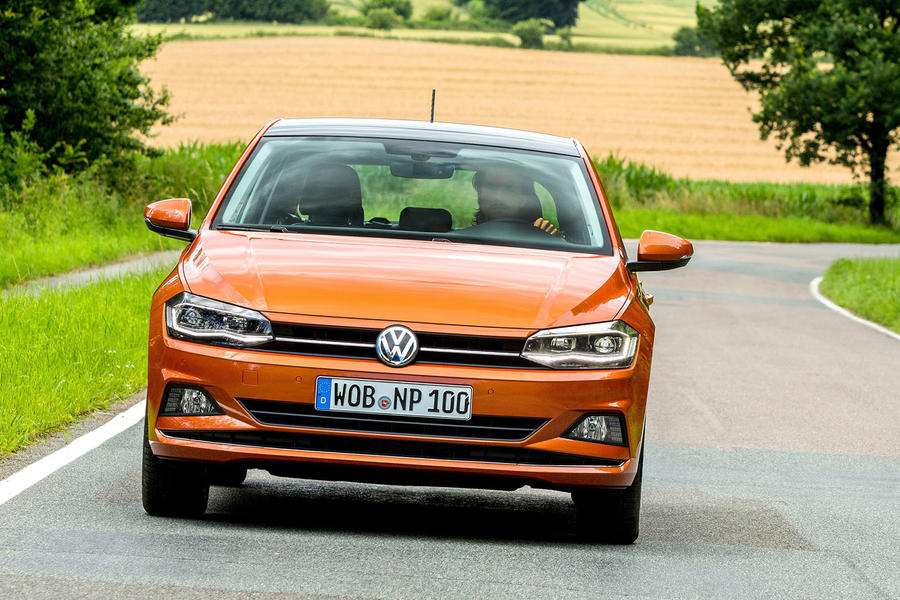 The adoption of the MQB platform has brought a significant increase in rigidity and stiffness over the old Polo. Volkswagen says stiffness has increased from 14,00Nm per degree to more than 18,000Nm per degree. The result is a supple and superbly controlled ride. Even on badly pitted bitumen with the optional 17in alloy wheels and 215/45 profile tyres worn by our test car, it proved outstanding. The combination of superb damping control and fine absorption qualities bring a new-found calmness to the chassis, making for relaxed traits, both around town and on extended motorway runs.

Light and precise electric power steering makes the new Polo impressively manoeuvrable in tight spaces and it feels right at home in city traffic. Dynamically, it is a clear improvement on the earlier Polo, thanks to the inherent qualities of its new platform and a reworked suspension featuring MacPherson struts up front and a thoroughly revised torsion beam arrangement at the rear. Compared with some rivals, though, it lacks the intrinsic character to make its handling truly entertaining.

The wider tracks help the front wheels grip well, resisting the urge to push on even when hustled through a series of constant radius bends. The body movements are also nicely controlled, with progressive but never overwhelming lean. It achieves most of what you ask of it with imbibing efficiency, but it is sadly without great charisma. 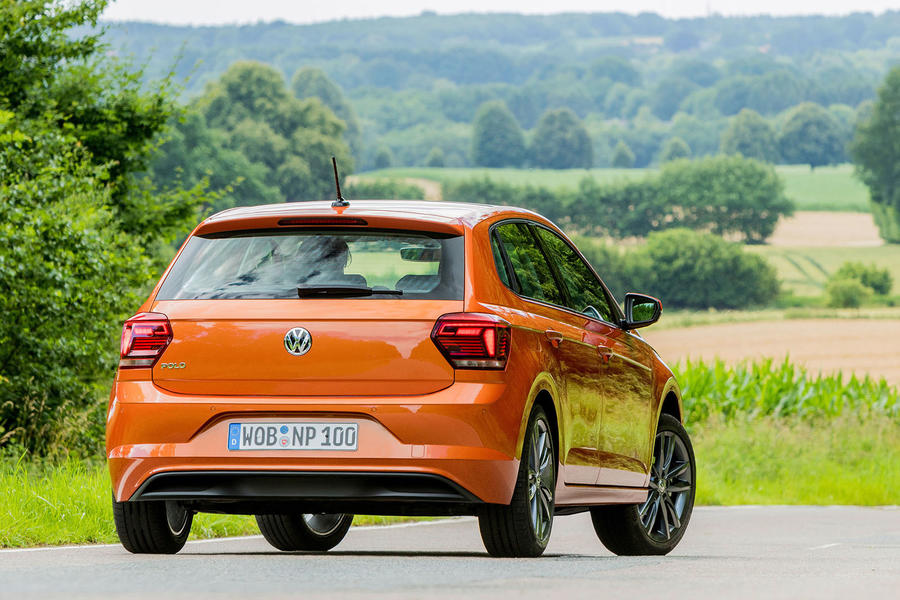 The new Polo is a very good car, although not without its faults. Its styling is more expressive than ever before, the interior feels more upmarket and its increased dimensions make it more practical and accommodating than ever before. It also drives extremely well in combination with the 113bhp turbocharged 1.0-litre three-cylinder, delivering a quiet and absorbent ride, with direct and precise handling traits.

It’s also a thoroughly well-built car with outstanding quality and the sort of finish to match any rival hatchback. In many aspects, it feels like a smaller Volkswagen Golf - very much a compliment for a car aiming to rise above the Ford Fiesta, Renault Clio, Nissan Micra, Seat Ibiza and Skoda Fabia. You can detect the odd cost-cutting measure, most notably within the interior, although they are largely outweighed by the overall competence of the new Polo.

On the strength of what we’ve seen so far, the new Polo is surely set to continue the success of its previous generations. 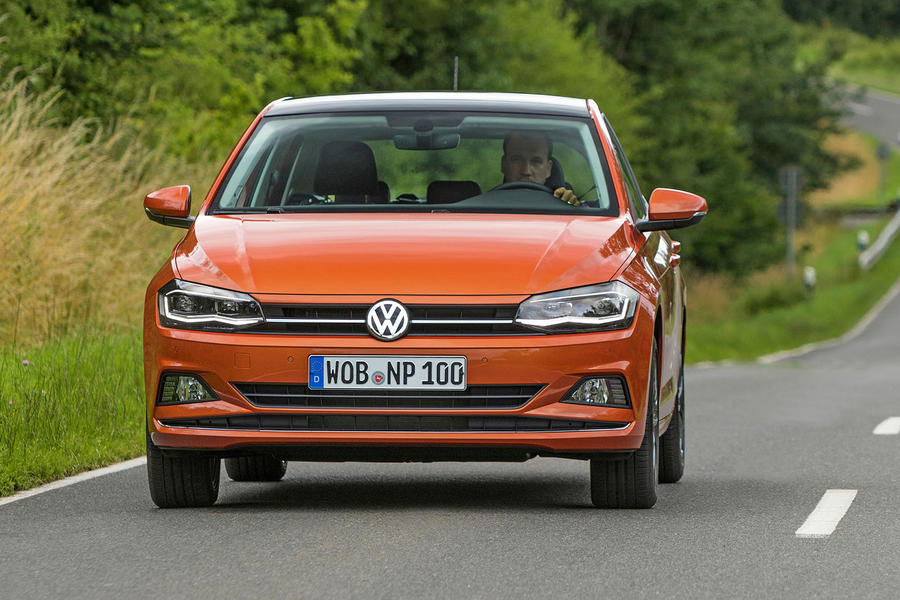 Sophisticated or dull, exciting or brash. Each to their own.

Next Golf will be bigger

With the Polo now only 200mm shorter than a Golf and less than 50mm narrower, I can see VW increasing the size of the Golf to maintain clear separation between them. I'm not though in any way interested in the Polo, it is just so incredibly bland, and not in a simple, honest and functional way. The front end reminds me of a late 90s Kia Mentor (Google it and see for yourself). I'm struggling to understand why you would buy a Polo over an Ibiza.

I've a current Polo GTI and love it

Deciding not to build a 3 door model means I won't be swapping my car for a new one when its launched. Shame, as it's pretty much the perfect small hot hatch, otherwise.