From £20,280
With its blend of the present and the future, is this still the perfectly balanced car?
Share
Open gallery
Close
Share review

Why we’re running it: To find out if the Mk8 Golf remains the world’s most rounded family hatch 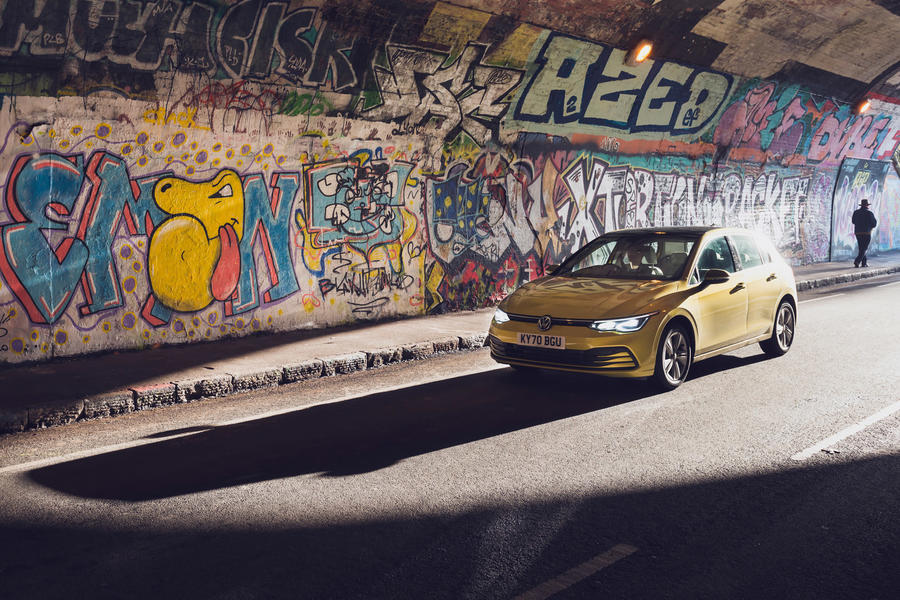 Life with a VW Golf: Month 3

A Golf-owning reader sent me some tips on the active safety settings, so I delved into the system to adjust them. It took me a while to realise the graphic that appeared wasn’t a loading screen but a menu, with the various systems selected as you touch the relevant image. Pleasingly slick, once I had realised and figured out what these systems were. 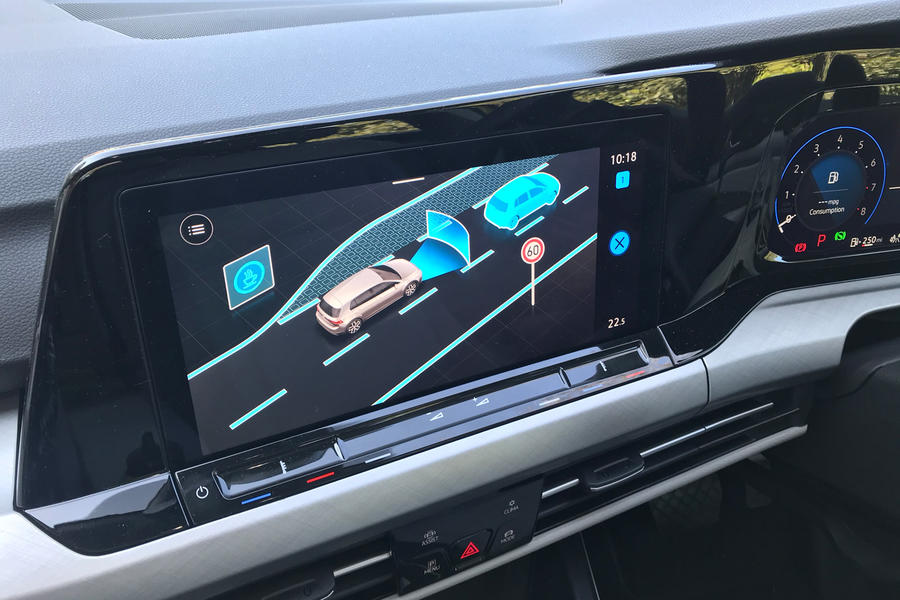 Life with a VW Golf: Month 2

It seems that not everything on a modern car can be controlled by a touchscreen, after all: the air vents in the Golf are still directed by sliding a little plastic toggle. Hurrah. And with the slimline vents making it impossible to tell if they’re open or closed, Volkswagen has helpfully put instructions on the toggles. How brilliantly old-school. 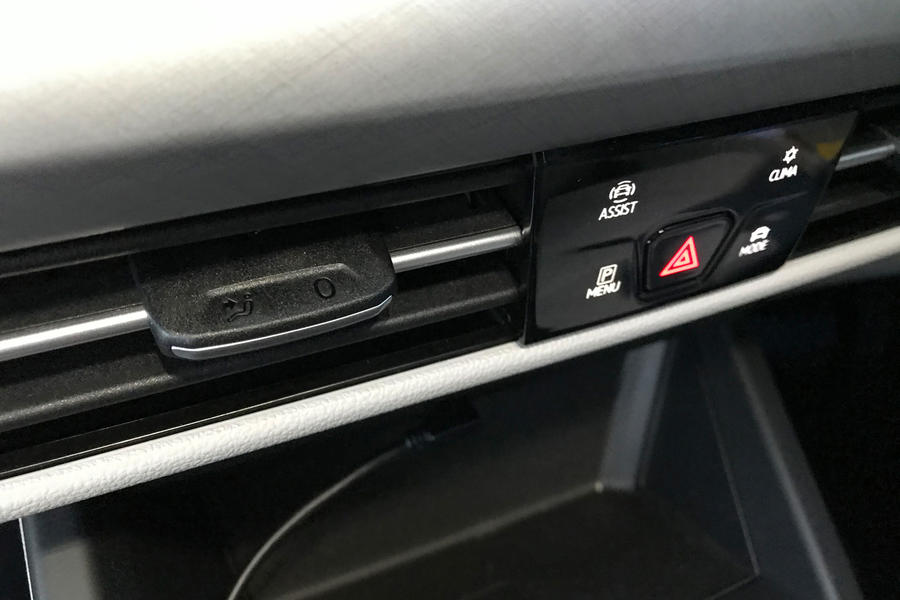 The cars pictured below are the twin titans of the Volkswagen Group, two machines that are both foundation and figurehead of their respective brands. And the Porsche 911 and Volkswagen Golf face the same challenge of staying true to their rich heritage while remaining relevant in the modern world.

I staged a brief reunion of these two extended family members recently when I drove my Golf long-termer to Porsche GB headquarters to collect a 911 Targa 4S for a review. No, this won’t be an impromptu comparison: you really can’t compare the two.

Suffice to say that, while obeying speed limits, you won’t reach your destination any faster in the 911, but you’ll do so in a bit comfort while using more fuel, making more noise and – especially in limited-run Heritage Edition trim – turning a lot more heads.

Still, some motorway mileage in both cars did make me appreciate the subtle, modern refinement the Golf offers. The 911 balances heritage and modernity by mixing classic design traits with modern elements, such as the combination of its analogue rev counter and clock with a digital infotainment and driver info display.

Styling aside, the Golf’s heritage isn’t rooted in retro-themed features but in how it harnesses modern tech to deliver a reassuringly confident, comforting and very Golf drive. That’s reflected particularly by our Golf’s eTSI powertrain, whose mild-hybrid set-up adds a layer of refinement and efficiency to the combustion engine. The electric power from the 48V ISG is used to boost torque at lower speeds, while the system offers engine-off coasting or can automatically deactivate two of the 1.5-litre engine’s four cylinders to improve fuel economy.

In practice, the system is barely noticeable, making an already quiet unit even calmer. It’s hard to tell when the car is using two cylinders or EV power, so to see what was happening I delved through the myriad options on the digital dashboard and found the fuel economy display, which helpfully notes when the Golf is in two-cylinder or coasting mode.

Regardless, the result was a quiet, efficient powertrain capable of cruising at motorway speed without ever feeling really stressed. In other words, it’s modern tech applied to classic Golf elements to deliver a reassuringly familiar yet contemporary drive.

The Golf might not turn quite as many heads as this retro 911, but in its own way, it’s just as successful a blend of classic and modern.

Hold steady The auto handbrake and engine stop/start both function superbly. Sounds simple, but it’s rare to find them working so well in practice.

Lane keeping warning Overly cautious lane alert has been a bugbear on our Skoda Octavia, and the closely related Golf has similar spatial-awareness issues. 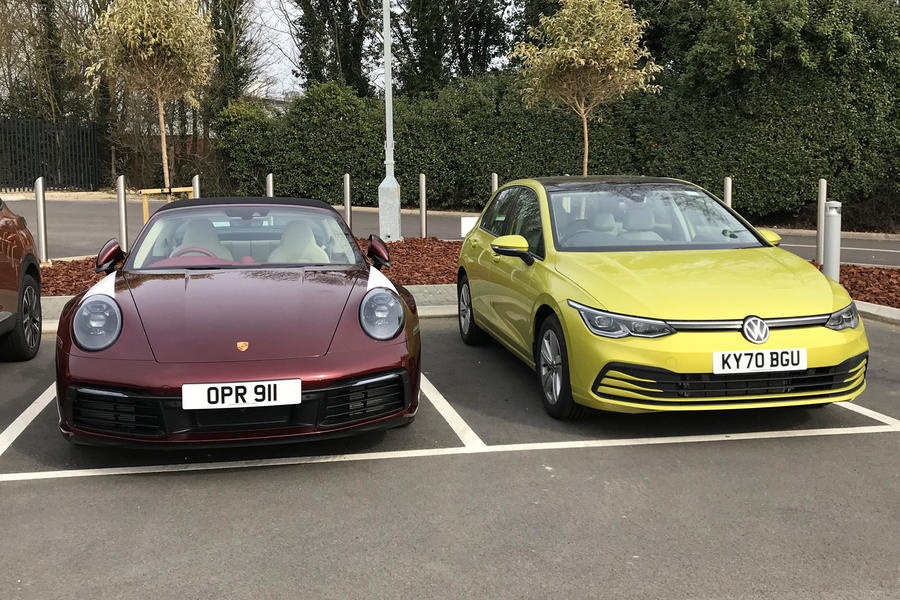 Life with a VW Golf: Month 1

The minimalism of the Golf’s interior extends beyond the paring back of buttons: even by modern standards, its gear selector is on the stubby side. But it’s well designed and has a satisfying feel, making it easy to flick from drive to reverse – most of the time. It’s so low that a few times I’ve missed it and pulled the electronic handbrake on instead. 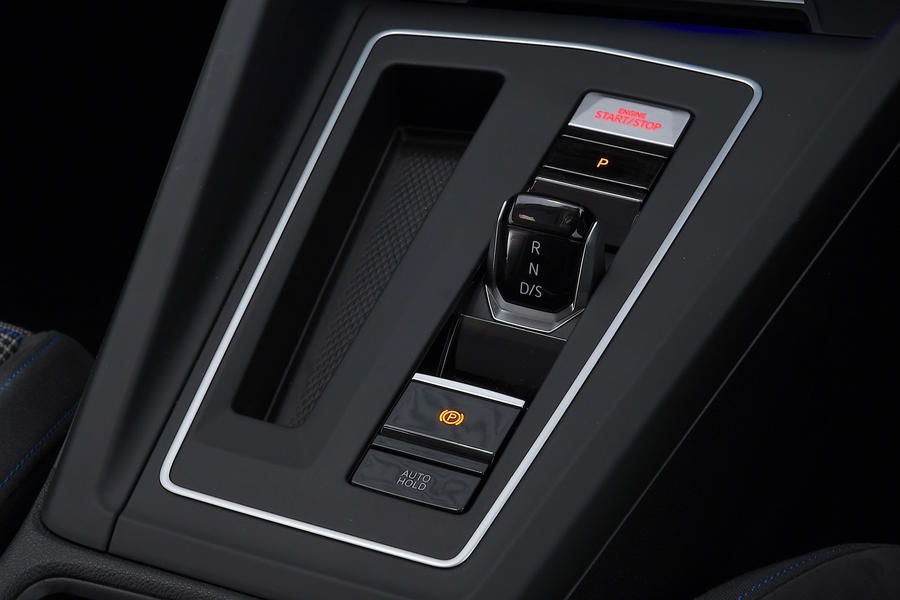 As the switch to electrification accelerates, the car world is changing at a dizzying pace – and at every level.

The Fiat 500 and the Mini have gone electric. There’s a Mustang badge on an electric SUV. The Renault 5 is returning with battery power. Bentley is going electric. Even Hummer – Hummer! – has become an EV-only brand. But in this chaotic flux, some automotive totems remain resistant to change and continue to follow a path of evolution, not revolution.

One such vehicle is the Volkswagen Golf. Through 48 years and eight generations, it has been the reassuring, steadying constant at the heart of Volkswagen – and, by extension, the whole VW Group. The Golf has changed during that time, clearly, but it’s always in carefully judged, cautious steps rather than bold leaps.

The Golf’s success has been down to a perfect blend of ingredients. It is the realisation of a treacherously difficult balancing act. There are class rivals that are faster or drive better. There are rivals that offer more space and visibility. Some rivals offer more comfort, or arguably more desirable badges. And some rivals are cheaper to buy and run. But the Golf’s success has always been in how VW has expertly and delicately blended an unbeatable all-round package – one you change at your peril.

But times change, and even VW recognises that. So while the eighthgeneration Golf continues to evolve carefully, Wolfsburg has tried to push it into the future in some key areas while also committing fully to the revolution with the ID 3. You know, the electric hatch VW has called the successor to the Golf. Even though the Golf is still here. Bit awkward, eh?

All of which makes it a perfect time to add a Golf to our long-term fleet: it’s only over the course of an extended test that we’ll truly gauge whether VW has maintained the Golf’s perfect balance – or whether it’s changed too much or not enough. 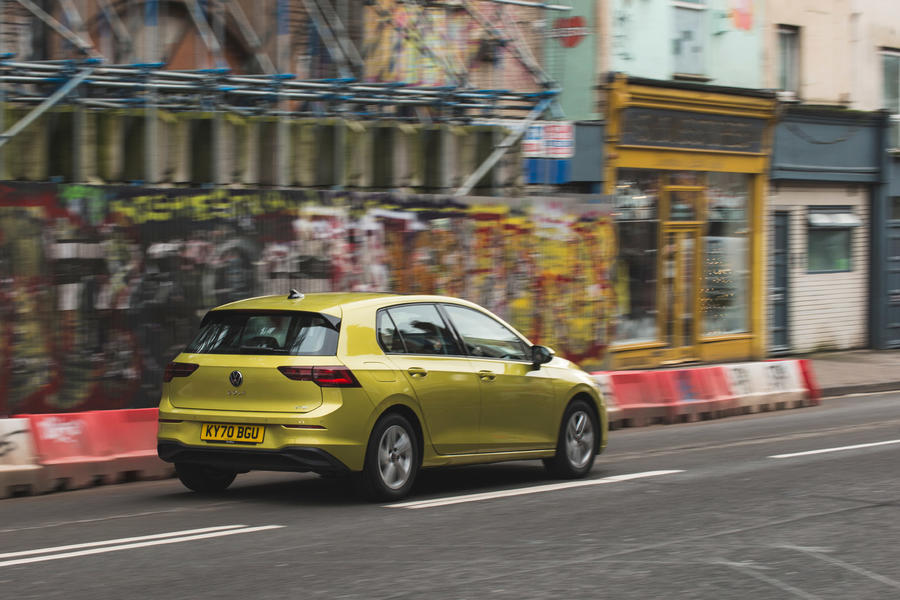 Sure enough, the Mk8 Golf looks very much like a Golf. Which isn’t a bad thing. You’ll have your own views on the design changes made for this latest version (the somewhat extended, ‘drooping’ front has divided opinion), but it remains instantly, reassuringly recognisable. Inside, things have changed quite a bit. It doesn’t take long to literally put your finger on why: as is the trend, most of the buttons and switches have gone, with controls shifted to the touchscreen, a handful of haptic panels and even some sliders. Not even the Golf can truly stand firm in the face of revolution, it seems.

We’ve plumped for the 1.5-litre 148bhp eTSI turbocharged petrol engine, which features a typically steady approach to electrification: a mild-hybrid 48V belt starter generator system. It’s classic Golf: a refinement of long-running tech, with a minor nod towards the future – and the promise of 50.6mpg. With the mild-hybrid engine, the only gearbox is a seven-speed DSG auto.

To sample the Golf at its purest, we have opted for the basic Life trim. That comes with most of the kit you really need, including LED headlights, a range of safety systems, 16in wheels, air conditioning, a 10in infotainment touchscreen and internal ambient lighting.

We did tick some option boxes, though, in part to see how VW has tried to change the Golf for the digital age. Therefore, among the extras is the £1600 Discover Navigation Pro infotainment set-up, which offers features such as voice and gesture control – even though I remain reluctant to talk to or wave at my car. We also couldn’t resist the £950 Dynamic Chassis Control system: we may not be sampling the Golf GTI or Golf R, but we still want to experience the most dynamic handling possible.

A further £625 went on the distinctive Lime Yellow metallic paint – or Luminous Bogey, as my nephew has christened it. You can decide if that’s money well spent, although it certainly makes the Golf easier to spot in a dark car park.

The early impressions are good. As our reviews and road tests of the Golf 8 have shown, it remains a refined, hugely competent and comfortable all-rounder. It may not feel like you’re experiencing the future of motoring when you’re driving it, but it definitely feels like an ideal family car for the present.

That said, so far I’m less convinced by the interior controls. Without trying to sound too much like a luddite, the haptic controls and sliders don’t feel as intuitive or well-judged as ‘proper’ buttons. But I’ll persist with them: the industry is moving that way, apparently in part because of customer demand. Perhaps once I’ve grown familiar with them they’ll become second nature and intuitive, in the way that a Golf should. 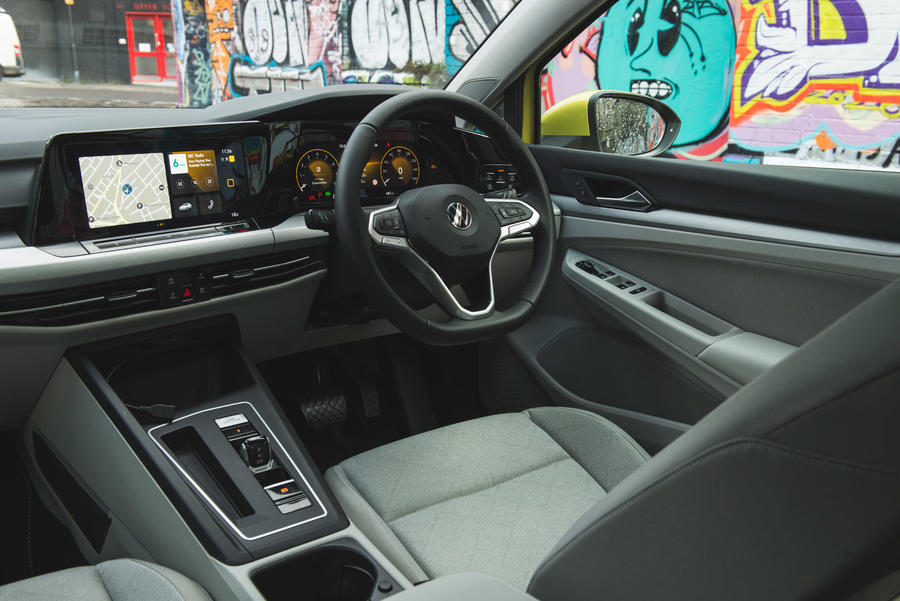 So far I’ve experienced a few issues when my iPhone has been connected via wireless Apple CarPlay, but that could be down to wonky Bluetooth on my phone.

Still, those will be things to watch in the weeks ahead. And if they seem like quite minor aspects for a longterm test car, it’s because they are: but when the success of a model has been built on how well balanced it is, issues with minor aspects can easily throw that balance off.

Our expectations are high, in other words. But they should be: this is a Golf, after all. Its success isn’t built on bold promises or grand revolutions – but on being a Golf.

I’ll have to echo James’s comments on the use of touch sliders and controls in the new Golf – the climate functions are hugely awkward to operate without faffing with voice control. You get used to them but, frankly, if it ain’t broke, don’t fix it. It’s a shame, because the Mk7 Golf was a paragon of ergonomic excellence. 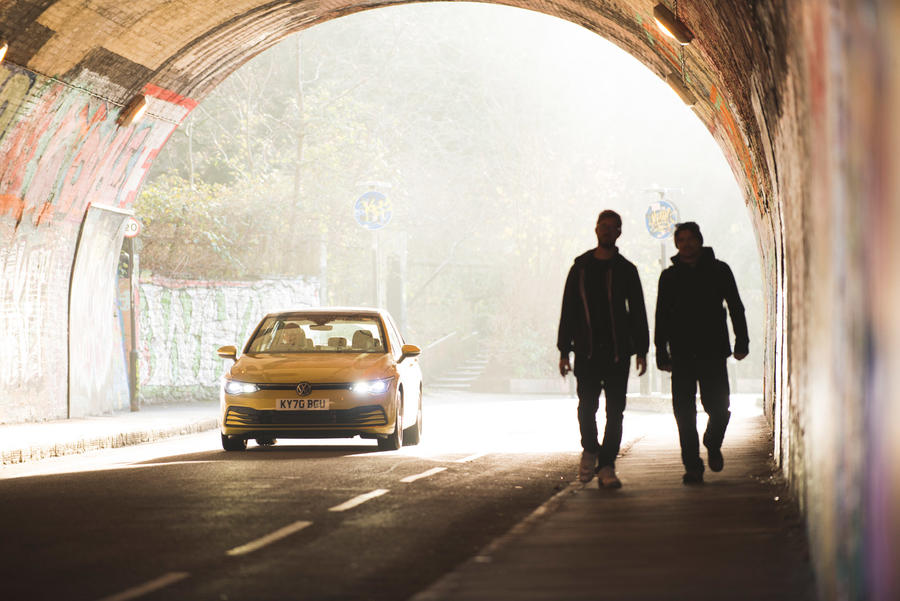 ".... the haptic controls and sliders don’t feel as intuitive or well-judged as ‘proper’ buttons. But I’ll persist with them: the industry is moving that way, apparently in part because of customer demand..."

Some parts of the industry, maybe, but other, more safety conscious and consumer responsive manufacturers are retaining, even moving back to physical climate and audio controls. And lets face it, reduced cost is a significant driving force for these touch controls, consumer demand or not.

I have always respected the standout all round competence of the Golf but this Mk 8 version leaves me cold. It looks to be change for change's sake with no real improvements over the excellent 7.5. I don't think it looks any better, by all accounts the quality has been pared back and clearly (if you excuse the pun) the infotainment system and controls are not as well executed. It's competitors are still not as rounded which makes it all the more disappointing that the Golf has taken a step back. If you can live with its larger size the Skoda Octavia is looking a better buy.

Why didn't they resurrect the Scirroco instead of trying to hide the middle age spread of the Golf?