Yaris lore won’t be a specialist topic for too many petrolheads, but it’s a relatively interesting story and worth recounting now that the almost entirely new fourth-generation model is upon us.

The original Yaris arrived in 1999 with an almost comically curvaceous body and an instrument binnacle playfully skewed towards the centre of the dashboard. It was fun to look at, but it was also roomy and carefree to drive, and because of this, it sold so well that even Toyota was surprised. Young people especially liked it, and it duly reshaped the supermini class.

However, better-looking rivals had appeared by the mid-2000s (chiefly the Ford Fiesta), so where the Yaris’s cute boldness had once endeared it to recent L-platees, increasingly it was bought by older drivers, who were lured in by the promise of reliability and the efficient (but dull) hybrid powertrains first seen in 2012. For a small car, the Yaris therefore had an image problem, and Toyota tried but mostly failed to remedy this by over-styling subsequent iterations.

Lately, though, Toyota seems to have remembered those things called ‘hype’ and ‘desire’. Our first real whiff of the new Yaris came not in the forgettable form of some tiny-engined prototype but with the news that in development was a homologation-lite uber-Yaris incorporating technology from the nightmarish Yaris WRC rally car. We now know it as the GR Yaris. It makes 257bhp from a 1.6-litre turbo engine and puts it to the ground via all four wheels, some clutch-based rear-axle trickery and proper torque-sensing differentials. And lo, people are talking about the Yaris again.

Of course, the new Yaris Hybrid driven here is very unlike the GR Yaris. It isn’t available with just three doors, nor will it take roundabouts sideways. However, what’s important is that they appear related, and the regular Yaris’s butch wheel arches, squat rear and rising beltline indeed give it an attitude that its predecessor lacked. Even the entry-level Icon, on 16in wheels and without the striking two-tone paint job of our test car, looks decently memorable – fun, even – although well it might for £19,910.

Yes, the Yaris is now dearer than before. Why? Because it uses the Toyota New Global Architecture, the same comparatively costly modular platform that underpins the larger (and frankly very good) Corolla. The benefits are a much stiffer car, a lower centre of gravity and accommodation for several driver assistance systems, all of which are standard on the Yaris.

This architecture also allows for better use of space. The Yaris is now 55mm shorter than before so sneaks below four metres in length, yet its wheelbase has grown by an impressive 50mm. This is the sort of statistic worth mentioning even when it comes to executive saloons, let alone city-centric hatchbacks.

What hasn’t improved is the old Yaris’s superbly tight turning circle; actually, it has grown slightly, but it’s still no worse than that of the Fiesta or Volkswagen Polo.

The hybrid system is also new, although the technology is familiar. The 1.5 Hybrid tested here is only derivative coming to UK, mostly because, even were Toyota UK to offer the basic 1.0 and 1.5 petrols, almost everyone would go for the electrified model anyway – hardly surprising given that its official economy is almost 70mpg. Total output for the powertrain, which features a three-cylinder Atkinson-cycle petrol engine and two electric motors (one in the driveline proper, another to start the engine and charge both the drive and ancillary batteries), is 114bhp. That’s 16bhp more than before, and every bit of that will be gratefully received by current Yaris drivers who, by Toyota’s own admission, struggle to overtake.

CO2 emissions are also down around a fifth, and the lithium ion battery pack isn’t only lighter than the old nickel-metal hydride one but also delivers faster energy flows. 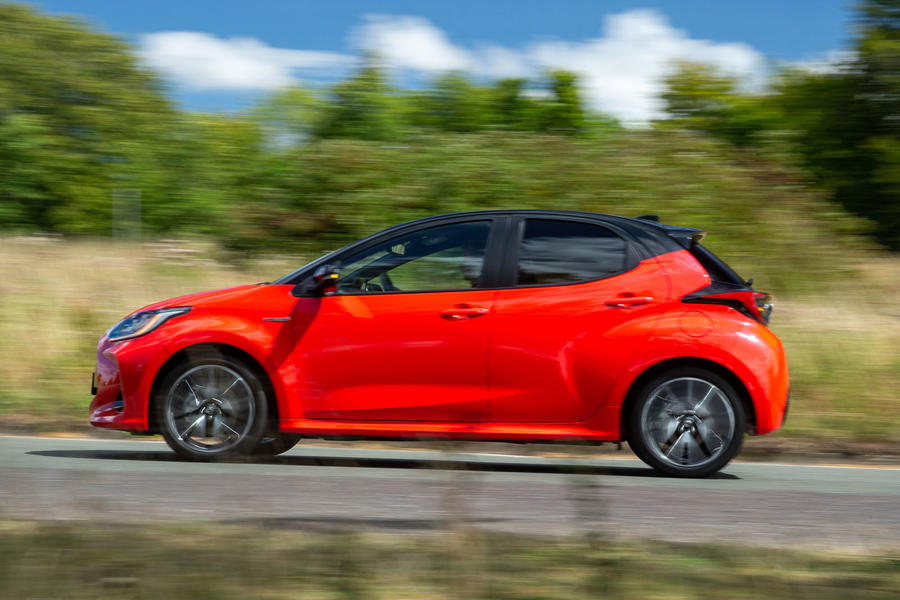 Our test drive was brief and our left-hand-drive test car is Belgian-spec, so its equipment doesn’t tally with what we’ll be offered here. What you’re essentially looking at is mid-ranking Design trim but with 17in (rather than 16in) wheels, plus some extras such as the colour head-up display and wireless phone charging.

Fundamentally, this is the most interesting Yaris cabin since the original. As with the new Corolla, perceived quality has taken a leap forward, while there are useful ledges and storage cubbies alongside convincing textures, including firm rubber mouldings and fabric coverings. Add in the supportive seats, racy steering wheel and widely adjustable steering column and you have an environment that feels mature but not dull. Back-row passenger space is better than good.

Bad points? For a car that will be driven mostly in town, the A-pillars are too thick, while the unattractive touchscreen dominates your view ahead. The infotainment interface lacks polish, too, but at least Android Auto and Apple CarPlay are standard.

The driving experience is mixed. The battery notionally stores around four miles of range, but it deploys it tactically. The Yaris pulls away under quick and quiet electric power alone, and the stab of torque you get is useful when pulling onto roundabouts and the like. Ask for more than the motor can give and the engine fires up – coarsely but not unforgivably so – and the two power sources together provide reasonable mid-range acceleration. Overtakes still require some planning, mind. Back off and the engine then goes back to sleep without hesitation.

This isn’t an engaging powertrain – certainly not when compared against a turbo Fiesta with three pedals – but it is economical. On a varied route, it averaged 63mpg without us trying. As for steering feel, that isn’t really the main event for your common-or-garden Yaris, and the rack is at least light and nicely geared, but let’s hope the GR Yaris does better…

Refinement is good on the move and the CVT’s ‘elastic band’ effect seems less pronounced than before, although the ride quality becomes noticeably choppy on the motorway (16in wheels may help in this regard). But the best thing about the Yaris (apart from its design, economy or cabin) is its new chassis. It’s actually very neutral, and so this little car corners tidily and claws genuinely good grip out of its modest rubber.

I don’t suppose many owners will throw their Yaris at corners, but if they did, they would find it absolutely doesn’t come apart. That ability is wasted here, but it augurs well.

One last thing worth mentioning is that, on its 17in wheels, our test car rode in more prickly fashion that'd we like, and on a variety of roads. It turns out the suspension tune is intentionally firmer on the 17in wheels, so sizing down to 16in could make a genuinely meaningful improvement. 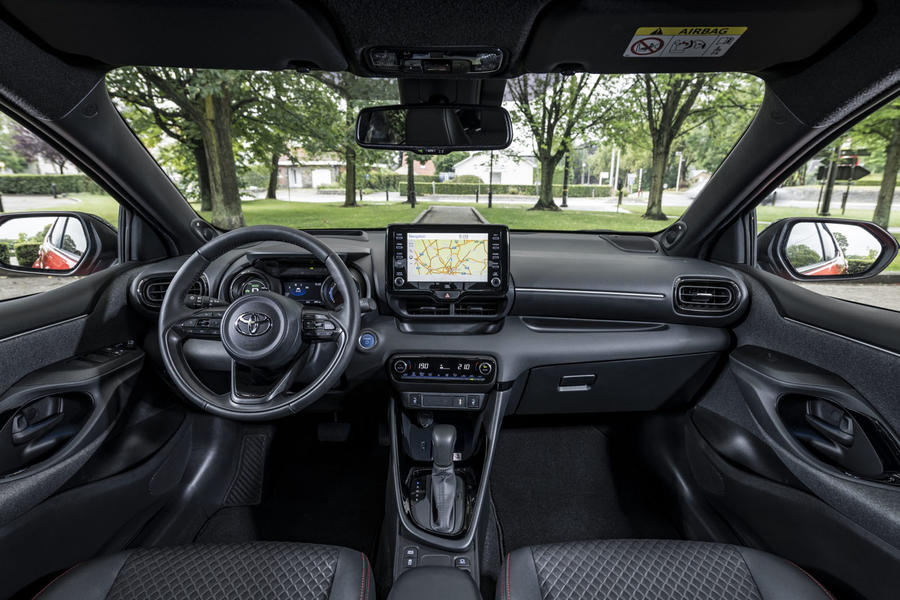 The Yaris, then, is now better than before in the areas that matter and probably more characterful than at any time since its inception. Plus, the stage seems very nicely set for the one we really care about: the mighty GR. 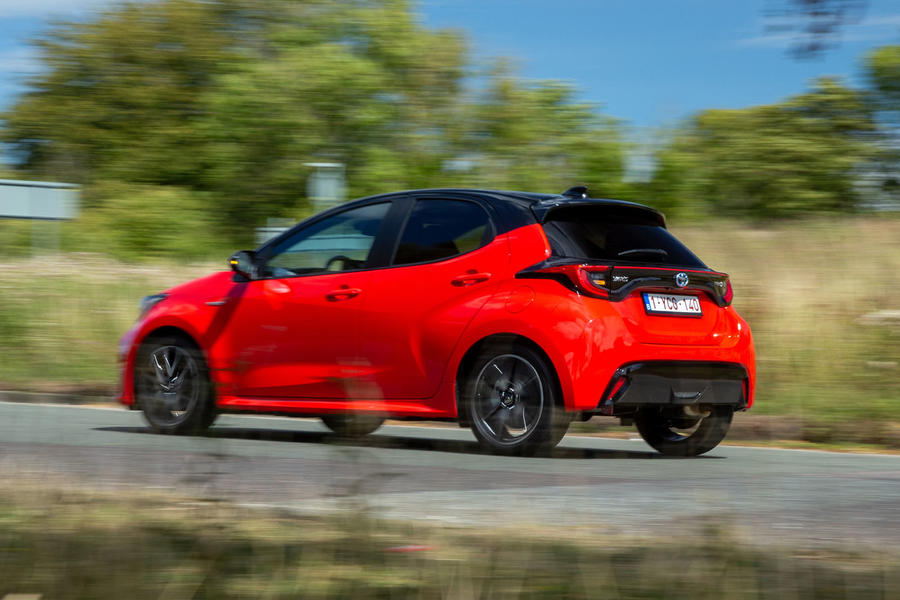 Where would my money go

208 or Corsa, all 3 will still be going in 20 years if you look after them but I wonder if the battery in the Yaris will just be a dead weight.  Plus, the Corsa looks better is bigger and around 2k cheaper

"the Yaris will still be running strong when the french pos 208 will be a cube. He is just prejudiced to the badge."
Please, the irony in that statement is to much to take.
Andrew1 12 August 2020

Exactly, I obviously don't think they are the comparable in terms of quality. I would take the 208 even if it were more expensive.
View all comments (13)