From £12,7506
Refreshing new take on a hybrid small car. It's expensive, though, and will need to be more refined than this early prototype when it goes on sale in the autumn
Open gallery
Close

If you were thinking of swapping the Mercedes-Benz S-Class for a supermini to save the planet, think again. Downsizing to something like this Renault Clio is no longer enough when it comes to reducing CO2.

Small cars are harshly treated in this year's stiff new EU emissions legislation and superminis are going to have to get electrified to keep up. Nor is a battery electric going to cut it: they're too expensive. As Ali Kassai, director of Renault's electric vehicle product planning, points out: "There's a lot of resistance from buyers to the idea of a £30,000 battery electric hatchback."

Besides, the brand already sells its Renault Zoe battery electric, which means the equivalent Mk5 Clio needs another drivetrain. In this case, it's a hybrid, although its crossover cousin, the Renault Captur, gets a plug-in hybrid drivetrain based on the same system at the end of this year.

So far, there have been only two hybrid superminis: Honda’s Honda Jazz hybrid and Toyota’s Yaris hybrid, which, since 2011 and 2012 respectively, have proven that you can (just) make money with a tiny hybrid. Renault aims to do the same with its Clio E-Tech hybrid, which goes on sale this year at about £25,000.

The E-Tech project started about eight years ago, when the French government challenged its home car makers to come up with eco cars for the end of the decade capable of fuel consumption in the range of 150mpg. By the 2014 Paris motor show, we were looking at the Renault Eolab concept, heavily aero styled with a plug-in hybrid drivetrain that included a three-speed clutchless transmission. The 75bhp 1.0-litre three-cylinder petrol engine, 53bhp electric motor and 6.7kWh lithium ion battery gave an NEDC fuel consumption of 282mpg, with 22g/km CO2 emissions and an electric-only range of 40 miles.

"We learned a lot from that car," says Grégoire Ginet, powertrain marketing director. "It's one reason why we have two motors in this system."

Renault's system also borrows from Formula 1 energy recovery practice, being based on a twin-motor system, with a simple four-speed dog-clutch gearbox built by Renault at its STA plant in Ruitz, France.

The main electric motor is a 230V 48bhp unit from a Nissan X-Trail hybrid and the secondary smaller motor is a 230V 20bhp unit. Both motors can drive and recharge on overrun, but the smaller unit assumes the duties of starting the petrol engine, spinning up the gearbox to synchronise the shifting (dog ’boxes can be very noisy and brutal) and maintaining the battery charge above a minimum level to restart the engine.

That petrol engine is a 140bhp 1.6-litre naturally aspirated four-cylinder unit based on a Nissan MPI engine from cars sold in Russia and South America. It has no belt-driven ancillaries, with the water pump, air-conditioning compressor, transmission and engine oil pumps, power steering and brake servo all electrically driven. The dog-clutch gearbox is augmented with a two-speed transaxle, giving the option of up to eight proper gear ratios, although because both transmissions have a geared neutral, the system can juggle up to 15 ratios in total.

With the exception of the 1.2kWh 38kg lithium ion battery pack under the boot floor, the entire driveline fits under the Clio's bonnet. With a smaller fuel tank, the Clio E-Tech weighs about 10kg more than a standard Clio 1.3 dual-clutch; about 1.26 tonnes, then. 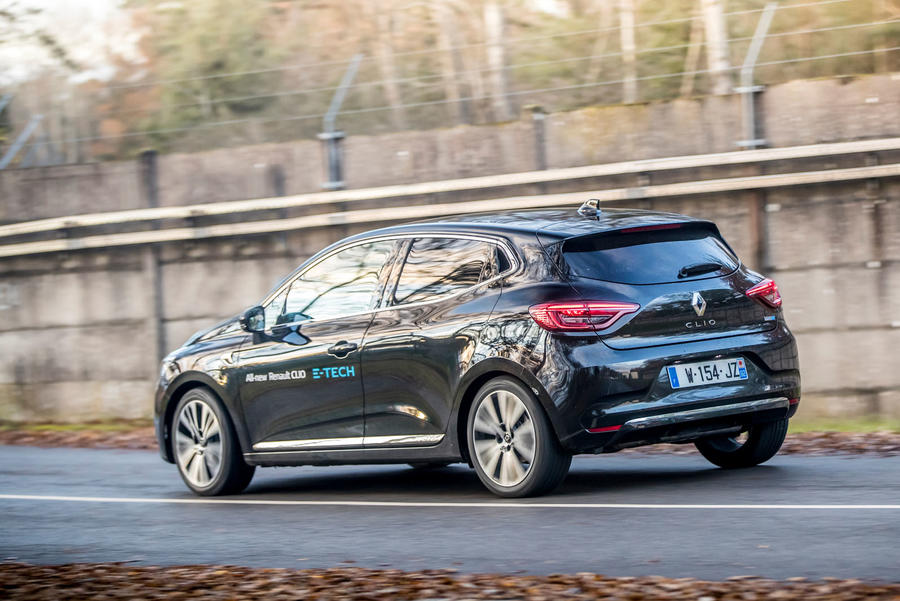 Unless it’s cold enough to need engine heat to warm the cabin, the E-Tech always starts off using its main electric motor up to about 10mph, changing up via its two available gears in the dog ’box and the twin-speed transaxle as the car accelerates. Then the engine starts and drives the car, with the second motor rapidly switching from starting to gear synchronising modes.

There are several driving modes: Eco, which prioritises battery electric drive up to about 44mph if there is sufficient charge; Hybrid, which blends petrol and electric motors for maximum economy; and Sport, which priorities performance. In addition, there's a Brake setting on the gearlever, which increases electrical regeneration during throttle lift-off; and a kickdown throttle function, which brings all the power sources into play, suspending EV mode if it is selected.

Like the F1 driveline, however, none of it is particularly intuitive. For a start, at sustained maximum output, the second smaller motor might switch from power to charging mode to keep the battery supplying volts to the main motor. Similarly, since there's a level below which the battery charge cannot fall (or the second motor might not start the engine), the engine will occasionally start and rev higher than road speed might dictate to charge the battery.

For the most part, though, driving is reasonably logical and positive, without the rubber-band drive impression that dogs rival Toyota's system. Yet there are idiosyncrasies. The engine 'hangs' for a few seconds at high revs when you lift off the throttle, and if the battery is low, it starts on its own and revs higher than you expect. There's also the occasional grating noise from the dog ’box as gears scrape into engagement. Sport is particularly poor in this regard, but apparently it wasn't fully calibrated on the car we drove.

With only three badges to distinguish it from the outside and a digital dashboard with electric power/range in the instrument binnacle, it would be hard to tell that this is a hybrid unless you are driving, or filling it up. Renault claims about 80% of urban driving in the Clio E-Tech will be done in EV mode and that improves around-town fuel economy by about 40%. We saw about 50mpg on an uncalibrated fuel economy meter.

Our test car seemed to drive nicely, too, riding across French pavé cobbles with aplomb and not rolling onto its door handles when negotiating tight bends. The steering is well weighted and direct, albeit a bit lifeless, and the drivetrain is willing and reasonably quick to pick up if ultimately a little gutless. On this short acquaintance, the Clio E-Tech cycles the battery a lot more aggressively than the Toyota system and uses that power to prevent the runaway revving feel, but at a price. 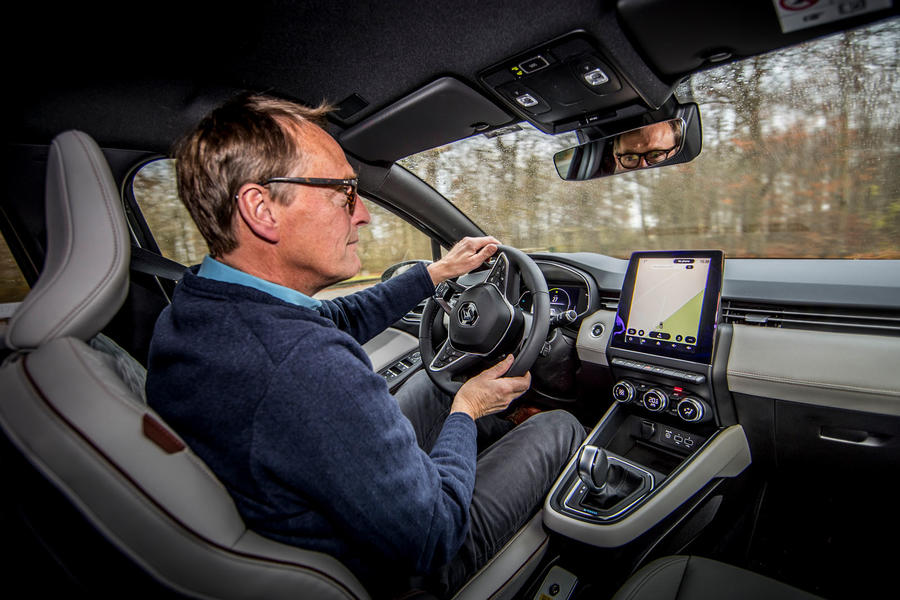 With so much going on under the bonnet, it's as well that customers have an idea of the whys and wherefores of the drivetrain, so that its foibles and peculiar noises aren't as alarming as they might first appear.

Promising as this new Clio undoubtedly is, Renault sales personnel might be in for some difficult explaining later this year. 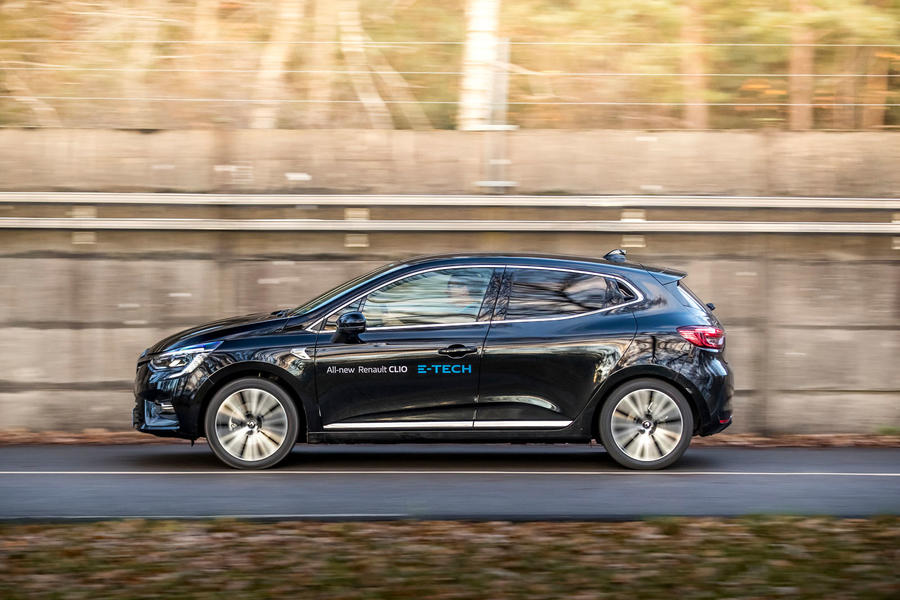 AC, why not refrain from alloting 'stars' when a model isn't the final version? This best in class (*) Clio deserves better. (*) Uncountable carblogs / automotive sites rate this Renault model as leader of its segment. No idea whether that's a substantial claim but hey, who am I to doubt these blessed testers.

Have to agree with si73, this sounds like a really complex car. I wonder how long the warranty will be. Toyota hybrids can be had for the same money (or less) so i know which I would choose.

Pity it doesnt look like the Eolab. It sounds pretty interesting but why use, an old, inefficient, far too large engine ? They shouldl have used a small one like the Eolab (ideally a 3 cylinder Euro 6d diesel if they want to be really efficient, get the best MPG and lowest CO2). And, shock horror, XXXX is right (theres a first time for everything !), why is the battery so small ?

....And, shock horror, XXXX is right (theres a first time for everything !), why is the battery so small ?

You're obsessed with me, jog on!!!