From £56,8358
It won’t depose the affordable sports car class’s mid-engined elite, but it brings welcome muscle, character, fun and variety all the same
Open gallery
Close

The fifth-generation Toyota Supra – the cult Japanese sports car that had twenty-four all-but unbroken years of continuous production history until disappearing from the scene in 2002 and staying away for almost as long as it had existed previously.

It gave us a lot to admire a couple of weeks ago when driven in Spain. But it also left us with a lingering whiff of unrealised potential; of a car that’s more exciting for what it might yet become than for what it already delivers. Time to find out if it’s a similar story on UK roads.

The car’s return is the result of two things: Toyota boss Akio Toyoda’s well-publicised effort to bring the fun factor back to the showrooms that oh-so-nearly bear his name, and a joint venture development project with BMW, signed not long after the launch of the GT86 sports car in 2012, which has twinned this car with the equally new ‘G29’-generation BMW Z4 roadster. In that respect, it might even have been the evident and, at the time, quite unlikely commitment that Toyota showed to sports car making with the GT86 that lead to the opportunity to show it all over again.

The new ‘A90’-generation Supra is the first to be built both under contract and outside of Japan, sharing a production line as well as a BMW-derived model platform with the Z4 and being assembled by Magna Steyr in Austria. It’s been developed for the global market by Toyota’s in-house motorsport division, Gazoo Racing – hence the ‘GR’ in the model name – and as such sets the template that all Toyota sports cars and performance derivatives will adopt.

Power for the car comes from a BMW-sourced 3.0-litre turbo straight six of 335bhp and 369lb ft. And since such an inline engine was considered by all alike a vital component of any Supra replacement, that it’s BMW with the most experience in making such engines, and that it’s also unlikely that even Toyota would have funded a sports car project like this all on its own – you might say the Supra that we’ve got is really the only one that the modern motor industry was ever likely to give us. 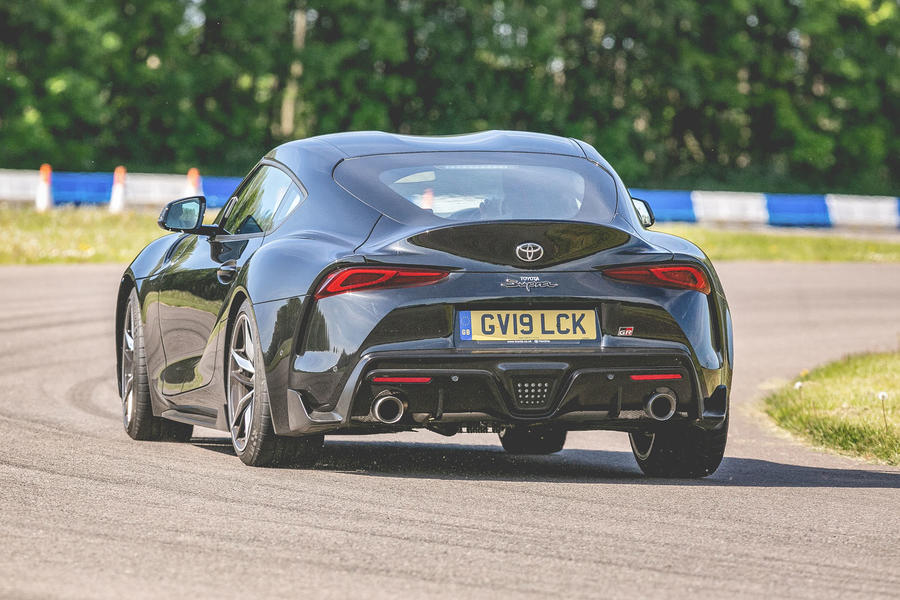 On UK roads and in right-hand drive form, it’d be a particularly joyless driver who wouldn’t savour a cross-country blast in this car. It’s true enough that you can have more fun at the wheel in one of the smaller, leaner, mid-engined options available for Supra money but, for reasons we’ll come to, not everybody wants one of those. If you can stomach this car’s price – given you can have either an Alpine A110 or a Porsche 718 Cayman S (or even a BMW M2 Competition with quite a lot more power) for less, that’s a sizeable ‘if’ – there’s a very good chance you’ll like it a lot.

The new ‘GR’ Supra’s performance certainly doesn’t leave much to chance. Handling may not be as nimble or delicately involving as in an Alpine A110, but the Supra’s BMW-sourced straight-six would make short work of the little guy on outright acceleration. It’s a smooth, torquey, responsive and free-revving engine, just as it is in any ‘M40i’-badged BMW; and while you might prefer a bit more genuine combustion noise from it in sport mode, and a bit less digital engine noise manipulation, it’s very hard to pull up on any other front.

The Supra might even be faster than Toyota claims. The specification sheet pegs top speed at an electronically limited 155mph. On a proving ground runway, though, it got to an indicated 160mph pretty swiftly – and was ready for more.

A cabin full of what many will instantly recognize as BMW-sourced componentry certainly seems curiously un-Toyota-like. Particularly so after dark, in fact, when the Toyota badge on the Supra’s steering wheel boss isn’t illuminated but all of Munich’s secondary knobs, stalks and switches are.

However, if you can overlook the details (and sports car drivers have so often been prevailed upon to do exactly that in return for a car of genuine pace, poise and thrill), the Supra certainly gets the basics right. The car’s driving position is good – low, straight, comfy and well-supported – the controls are well laid-out, the digital dials are readable, perceived cabin quality is more than acceptable for the class and, while cabin storage is a bit mean, there’s a very good-sized boot provided.

On the move, you can rest assured that the Supra doesn’t feel like some BMW Z4 clone. It has a motive character all of its own – one which begins to come together as you feel how quick the car is, how quickly but coherently it steers, and that it can really tighten up its body control, rotate underneath you, and give you plenty of throttle-adjustability of cornering attitude when you firm up those adaptive dampers, dial up the active differential settings and retire the stability control.

The car’s not as small, light or agile as the best mid-engined handlers in the class, and doesn’t have inertia-dodging responses or effortless body control associated. The more indulgent, benign and predictable transition into power-on oversteer that you tend to get from a front-engined sports car with a lightly-loaded driven rear axle isn’t a bad consolation prize, though – particularly if you’re the kind of driver who’s always preferred classic front-engined sports cars to other types for that reason among others.

Steering feel isn’t absent; in fact, it’s decent enough, coming with useful weight and self-centring – but more wouldn’t hurt. Neither would an extra pedal and a really engaging manual gearbox, for that last level of driver engagement. Though quicker in sport mode, the car’s eight-speed auto is a little bit slow-witted when responding to a flicked paddle, and always prefers a smooth shift to a really solid, positive, urgent-feeling one.

Otherwise, the performance level, handling precision and driver engagement of this car are all very good – while the suspension lets you choose between a really nicely compliant ride gait just for schlepping around, and a much tauter and quite closely controlled one that gives the car a clear sense of muscular purpose and composure when you want it. 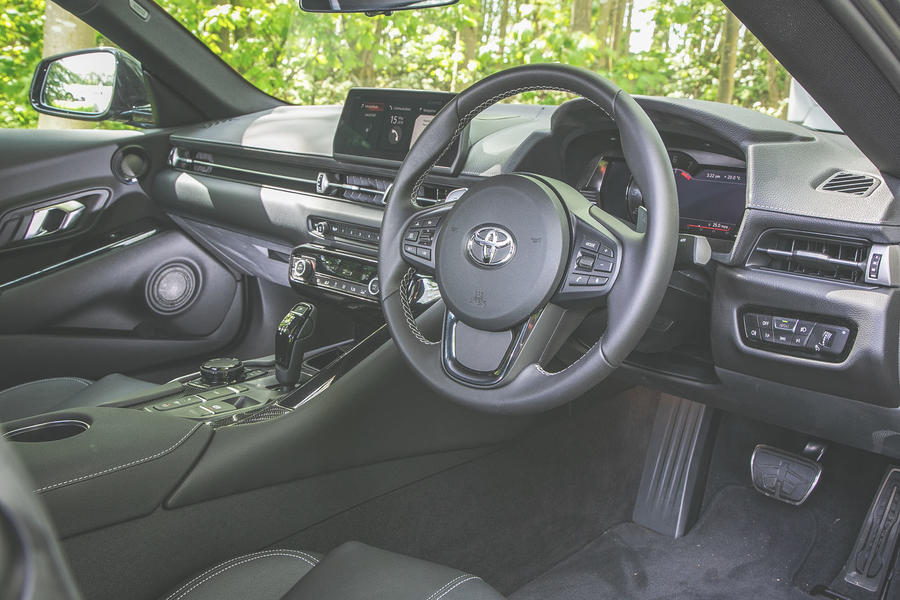 Have you ever thought a Porsche Cayman looks a bit weedy somehow? Do you prefer the classic long-nosed design proportions, the handling manners or the generally more convenient comfortable daily usability of a front-engined sports car to what you’d get from a smaller, lighter mid-engined car? Do you like a leftfield, alternative take on life? Then, yeah, maybe you should.

The ‘GR’ Supra isn’t quite a class-leading sports car judged solely (and probably overly simply) on its driving experience alone. It’s not as nimble, as immersive or as compelling as an A110; but, besides being quick, composed and plenty of fun to drive in its own way, it would also fit into your life more easily than the Alpine would.

This is certainly a much better sports car, in many ways, than either of Nissan’s more recent Z cars were; or than the Mazda RX8 was. If it were only priced like either of those two, there would be one less caveat in the way of a ringing endorsement. 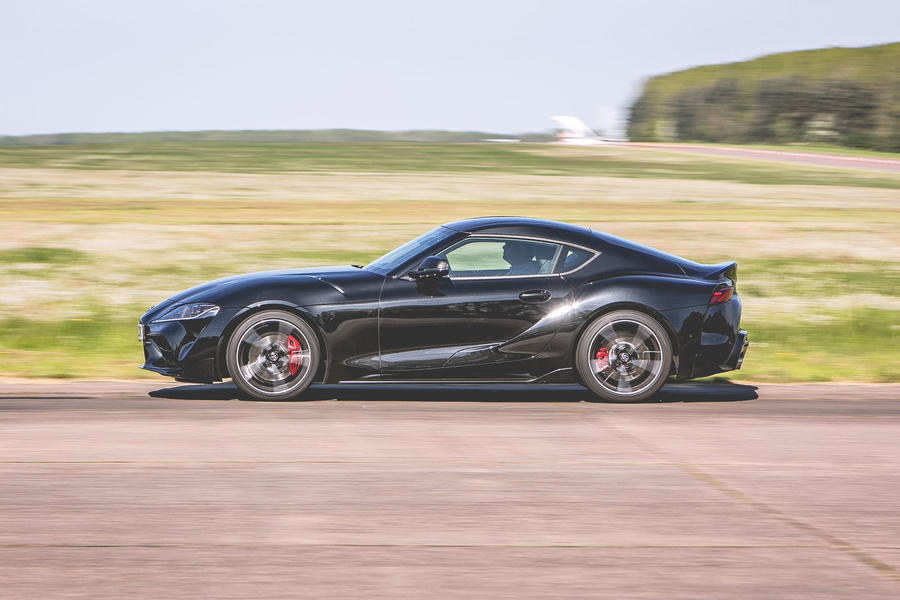 As the article suggests, at this price point there are more appealing alternatives available. Not seeing this over a Cayman S or a M2 Competition, maybe the Alpine. Styling is as always subjective, so leaving that aside once the Supra fanboys have bought theirs, not seeing strong demand going forward. Happy Toyota made the effort though.

I like it. Looks better in red though.  And come on Toyota couldn’t you have made the steering wheel look less Corolla-like...?

I like it. Looks better in red though.  And come on Toyota couldn’t you have made the steering wheel look less Corolla-like...?

The steering wheel is lifted directly from the BMW range, sans the badge.

It’s a BMW with a Kim

It’s a BMW with a Kimono.

It’s a BMW with a Kim

The DPRK sure like to make themselves known, even in the auto industry, as if they haven't got enough to deal with. :)