From £53,0358
Share review
A welcome addition to a small but growing class of purpose-built sports cars. Clearly a car with great potential, but not all of it has been realised yet
Share
Open gallery
Close

More than anything, this Toyota Supra is remarkable for the fact it exists. The imperative that it make money meant Toyota could not do the car by itself, but the joint venture with BMW that created it and the Z4 has been so fraught that Tetsuya Tada, its refreshingly honest chief engineer, told me "there were many times when I believed it simply would not happen".

So you might fear some unsatisfactory compromise between Toyota’s craving for a balls-to-the-wall Porsche Cayman rival and BMW’s no less strong but more commercially-motivated desire to build a broadly defined sporting GT. If so, you’re not alone: Toyota did too. Which is why once the hard points had been agreed – platform, powertrain, wheelbase and so on – the two projects became separate entities, to the extent that Tada-san has driven a Z4 just once and has no idea how his car differs from theirs in terms of settings for suspension, steering and electronically controlled differential. "If you’re going to compare the Supra to another car, compare it to the Cayman," he said. Some might call that fighting talk.

It’s an intriguing car even before you’ve fired up BMW’s 335bhp twin-scroll, single-turbo straight six. Remember too it’s the first car developed from scratch by Toyota’s in-house Gazoo Racing high performance division, hence its full title of Toyota GR Supra. I think it looks great, save some fussiness around the tail, but the hybrid BMW/Toyota interior takes acclimatisation. I don’t suppose too many Toyota customers will be outraged by the clear and effective iDrive interface and the bespoke instrument pack is informative and attractive. But the BMW switchgear looks odd in here, at least to me.

Of the two transmissions you might expect to find in a Cayman rival – a manual or double-clutch gearbox – there is no sign. Instead ZF’s ubiquitous 8HP 51 auto directs the power to the rear wheels via a multi-link rear axle. There are struts up front. The driving position is excellent and while the glass house is quite small, visibility all round is good enough by two-door coupé standards. 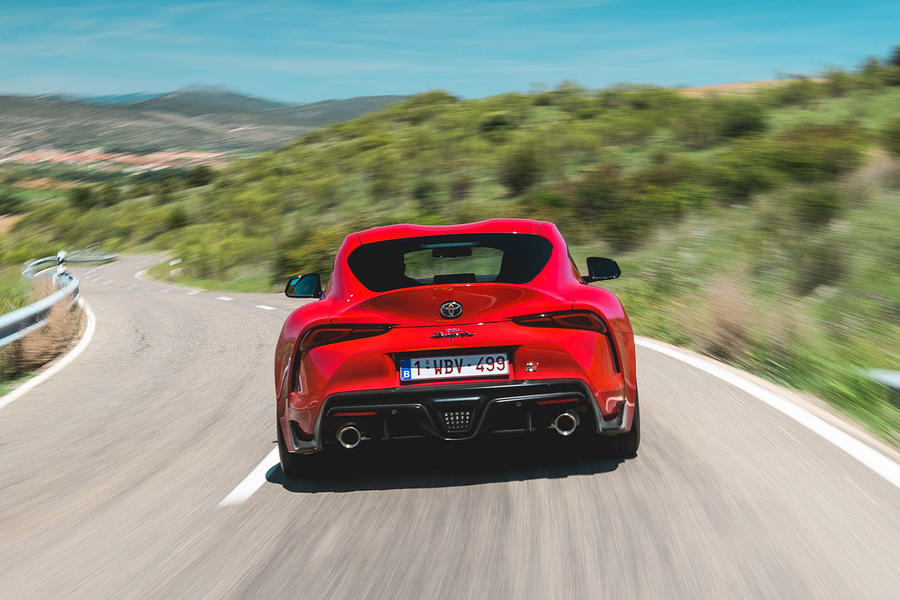 The most obvious benefit brought by such a combination of assets is that the Supra is extremely easy to drive, fast or slow. And while that might not be the most exciting of attributes to attach to a once achingly cool nameplate returning after a 17-year lay-off, out there in the real world, it matters. But for the derisory amount of on-board stowage space, this would be an exceptionally easy car with which to live. The engine is smooth at part throttle, the gearbox smoother – even the steering lock is incredibly generous. You’ll like the big boot too.

But actually, you just want to know what it’s like to drive. From the outset the signs are good, perhaps maybe even a little too good. You’ll notice first the ride quality: we’re used to cars like Caymans and Alpines riding well, but to achieve such plush comfort with a sizeable motor sitting on the driven wheels is a different challenge and one to which the Supra rises with ease. It positively glides down the road in a way you’d be happy to find in a soft-bottomed GT car, let alone one billed to be as sporting as this.

That six-cylinder engine is terrific, too. Not an M Power marvel, true, but certainly far more charming in both voice and power delivery than anything you’ll find under the engine cover of a 718 Cayman. There’s essentially zero lag and so wide is the power band you can deal with almost any decent road in third and fourth alone. You’ll like the way it handles, too: its steering is quite quick while avoiding the off-centre aggression engineered into some rapid racks to make cars feel more sporting than they really are. Lateral grip from the fat Michelins is impressive, longitudinal grip in the form of traction more impressive still. It’s a very easy car to get into a corner and an even easier one in which to power away.

So all good, then? Yes, and if this car has an issue, that’s it, right there. There’s goodness here, lots of it, but not so much that you’d more readily identify as being truly great. Which in this small but highly select class, is problematic.

Whatever Toyota’s engineers say, the eight speed auto is not the right gearbox for this car. It’s quite quick, but it doesn’t rip through its ratios as would the double-clutch transmission it needs. It can seem a little slow to take up downshifts too. Toyota says it was ruled out because of weight, but the Cayman and A110, both lighter cars (the latter considerably so), are so equipped.

But the real reason the Supra falls slightly but significantly short in the all-out sports car role chosen for it by its creators is the way its chassis is configured, and in three key areas. First there is that suspension softness: standard adaptive damping means the body’s never going to flop about, but there is still too much movement when you start to drive it really hard. The car is always stable but it needs guiding down a great road, where either one of its mid-engined rivals can simply be lobbed. Its body movements need a degree of anticipation and management that theirs do not. It resists understeer commendably well and will only oversteer on a dry road if provoked, and that’s impressive, but its angle of attack is less throttle sensitive than the mid-engined cars’, lacking as it does their near-balletic, on the limit grace.

Secondly, the steering is fine at guiding the car, but less good at filling your fingertips with information about conditions underfoot. Finally, the brake pedal has a slightly dead feel and should you ever take your Supra near a track, the discs will likely need some management if full performance is to be maintained lap after lap.

But none of this is what irks most about this new Supra. It’s the indelible impression it leaves that within that sensuous shape a truly great car lies imprisoned. I can almost hear it rattling the bars. My feeling when I drove it was not so much how good a car this is - and don’t let anyone tell you otherwise - but how much better even than this it could so easily be. It doesn’t even need more power. But a six-speed manual gearbox like the one BMW already ties to this engine would be a huge improvement and would shed some kilos, too. Apparently Toyota is considering it. I hate oversprung cars, but I’d still sacrifice some of that peachy ride quality if it bought a little more composure in extremis. And a set of big brakes would not go amiss either. 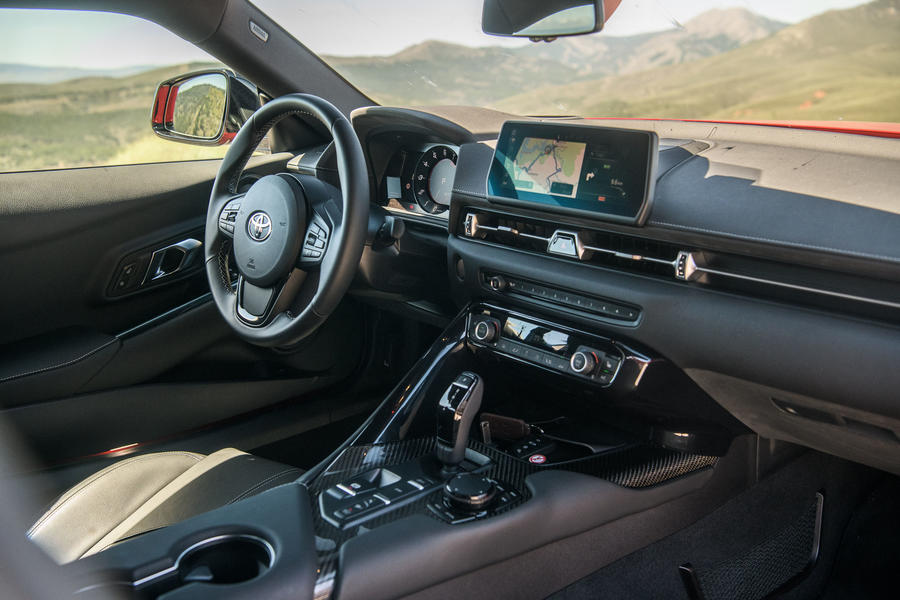 Toyota says that this Supra is just the start of the story. We know the four-cylinder car already on sale in Japan is heading towards Europe and Tada-san is absolutely not ruling out higher performance versions.

I hope he rules them in soon. To me ‘Supra’ is a special name and it deserves only to be attached to very special cars. For all Toyota’s claims that the new one has not been compromised by its BMW associations, compromised is how it feels. It’s as if Toyota knew exactly how to make this a landmark sports car but pulled back, just a little, right at the last moment. Until it has the courage of its convictions and delivers the car it could so transparently be, impressive though it is in many ways, 'work in progress' it will remain. 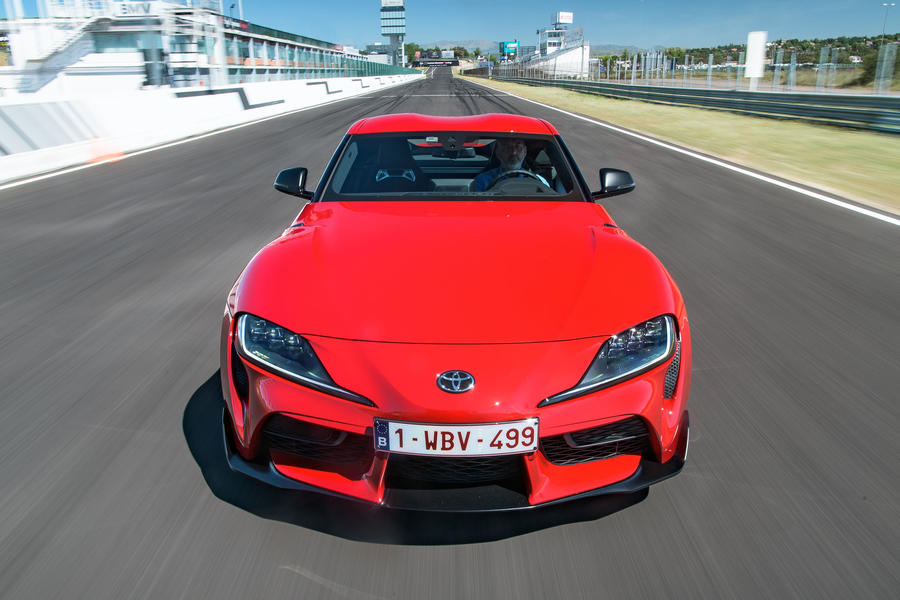 Too old for this sort of thing

I don't think it looks that great, but then I think body designers have, in the main, run out of ideas...another cleft here, another flute there, here's winglet. Back to simple and smooth for me. Equally, sadly, this appears just yet another "interface appliance", meaning you touch control surfaces not the surface of the road. I'm sure it'll be a success and just what the clinic ordered for those who'd find the Alpine just a wee bit too close to the void. Ok, I'm a former Elise pilot, and I to give up as it was just too raw for daily use. I had recent Boxster too, but it had too many gizmos as well. If I had the inclination for a new car (I don't) currently Alpine for me, followed by Cayman, probably. But I am of my age and have a preference for life's naked pleasures so it'd be a used 911, simpler the better. New cars are a waste of money for thr serious diver-pleasure seeker and this adds to the canon. One of those off-piste GT-86's turbo's might do.

Yep GT86 Turbo OR Supercharged, there's quite a few companies (including Cosworth) that do them for around £4,500 fitted.  Just wish Toyota would make it an official upgrade.

Too old for this sort of thing

I don't think it looks that great, but then I think body designers have, in the main, run out of ideas...another cleft here, another flute there, here's winglet. Back to simple and smooth for me. Equally, sadly, this appears just yet another "interface appliance", meaning you touch control surfaces not the surface of the road. I'm sure it'll be a success and just what the clinic ordered for those who'd find the Alpine just a wee bit too close to the void. Ok, I'm a former Elise pilot, and I to give up as it was just too raw for daily use. I had recent Boxster too, but it had too many gizmos as well. If I had the inclination for a new car (I don't) currently Alpine for me, followed by Cayman, probably. But I am of my age and have a preference for life's naked pleasures so it'd be a used 911, simpler the better. New cars are a waste of money for thr serious diver-pleasure seeker and this adds to the canon. One of those off-piste GT-86's turbo's might do.

At £54k it might well struggle if the GT86 is anything to go by, in 2018 it sold just 1,250 units across the whole of Europe (It only just beat the Bentayga), BRZ was even further behind. Shame because it's a car alot of people wanted.