This is the new entry-level, 2.0-litre Supra. It costs usefully less than the existing 3.0-litre model but, despite having always been on sale in Toyota's home market of Japan, it very nearly didn’t arrive in the UK at all.

Toyota Europe ummed and ahhed over whether to offer the four-cylinder Supra before eventually introducing it at the beginning of 2020. British executives then waited one year longer than their colleagues in Germany, worried that the junior Supra might cannibalise sales of the flagship model. It means that only now, in January 2021, can we get our hands on right-hand-drive versions, those executives having given the GR Supra 2.0 the green light.

We’re glad they did because serious sports cars in the £40,000-£50,000 window are comparatively rare. These days, people are more likely to buy the latest white-hot Volkswagen or Mercedes hatchback than they are an Alpine A110 or Porsche 718 Cayman, which in turn discourages manufacturers from building those kinds of cars. Above £50,000, your options open up a little, with cars such as the BMW M2 Competition and Jaguar F-Type, but below that mark? Slim pickings. 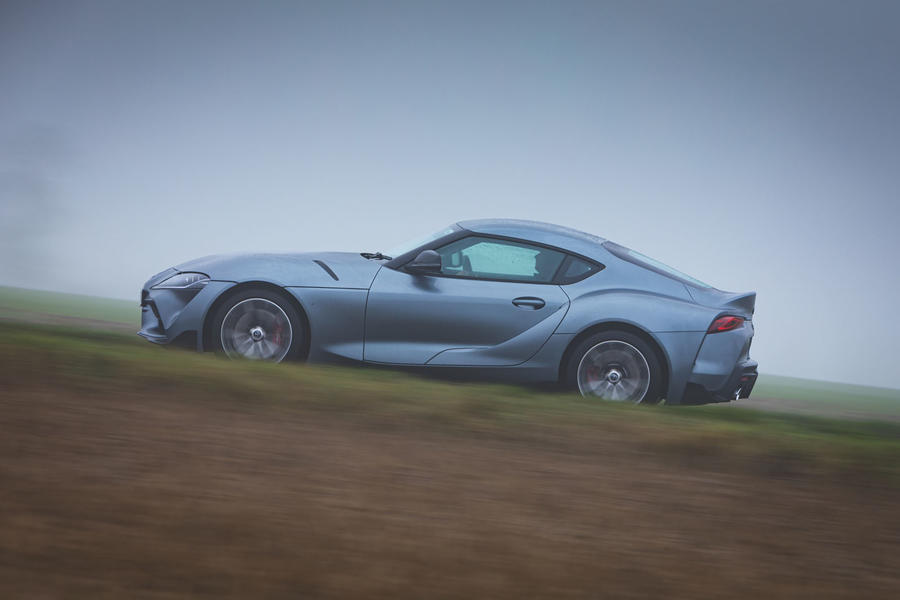 You’re probably familiar with the Supra 3.0 by now so there’s only one figure you really need to know about this new 2.0-litre version: 100kg.

That’s the weight Toyota has saved by swapping the engine that the car was launched with in 2019 – the 3.0-litre straight-six turbo unit supplied by BMW – for one with only two-thirds of the cylinder count and displacement.

It’s the same engine found in the BMW 330i, and one of the few four-cylinder units in the industry that’s mounted both at the front of the car and longitudinally. It also sits nicely behind the front axle line, which the six-cylinder unit overhangs with ease.

The engine isn’t entirely responsible for the 100kg saving but does contribute in a major way to the overall weight dropping from 1495kg to 1395kg. It means that in its lightest guise, the GT-centric Supra now weighs only 30kg more than a PDK-equipped 718 Cayman. (Whether you congratulate Toyota or chastise Porsche on the basis of this fact is another issue entirely.)

The Supra is otherwise largely unchanged. The eight-speed ZF automatic gearbox (alas, even for this new entry-level model, there is no manual option) is carried over wholesale, and the electromechanical steering’s 15.1:1 ratio remains an awful lot higher on paper than it feels on the road. The cast-iron brakes are also carried over wholesale, and so is the electronically controlled limited-slip differential in the rear axle.

Inside? Again, almost identical, which is to say vaguely claustrophobic but in an enjoyable, snug and intrepid-feeling way. The atmosphere within the Supra has always been set by the fundamental shape of the low-slung body and its small glasshouse, rather than the (mostly generous) trim level, but it’s good to see BMW’s slick 8.8in touchscreen infotainment system has been carried over from the more expensive model. 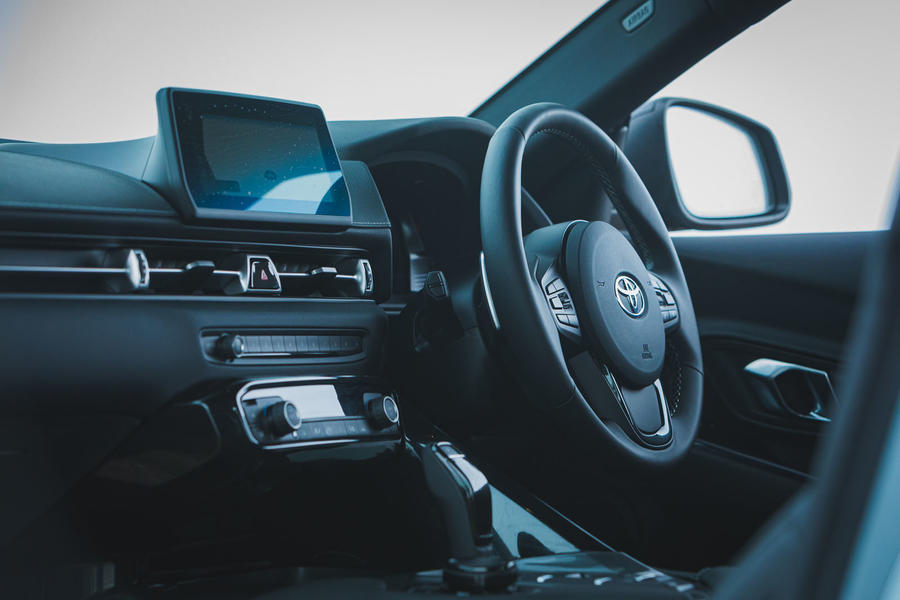 The seats themselves are now manually adjustable, rather than electric, and upholstered partly in Alcantara rather than the full leather you can option with the 3.0, although you might prefer it like this. After all, these are lighter, softer seats, even if their identical shape is beaten hands down in terms of comfort and support by the chairs in the Cayman.

What you might not like so much is the grey plastic that replaces the artfully constructed carbonfibre panel on the transmission tunnel in the 3.0. That was a nice bit of glamour in an otherwise greyscale cabin.

As for the driving experience, there are palpable differences. Open the long clamshell bonnet and you’ll find six inches of fresh air between the slam-panel and the leading edge of the engine cover. It’s here, well ahead of the axle line, where mass is especially detrimental to handling, and where, unlike the Supra 3.0, the new car doesn’t have much hardware.

The most beneficial knock-on effect of this is that, where the steering response in the 3.0 feels too keen for the Supra’s soft-ish spring rates and contributes to a slight feeling of inertia when you change direction, the 2.0 is much more alert and obedient to your commands. The car’s centre of mass is palpably further backward in the chassis, too, and the car’s nose that much more enthusiastic to flick this way and that, although the Supra's subtle but definite understeer balance remains.

The slightly oleaginous steering feel also remains, and ‘feel’ is one area where rivals still get the better of the Supra. However, the response of the chassis to steering inputs shows definite improvements and the result is a more confidence-inspiring car on challenging roads. Especially when the two-mode adaptive dampers are in their firmer Sport setting.

If there's any caveat concerning the weight saving, it's that, so far as I can tell, the brakes haven't been retuned to account for it. The Supra 2.0's brake pedal feels too sensitive, and over-servoed, responding aggressively on account of weight that was once there but isn't any more. On a good road, it's enough to disturb your flow a little.

As for the new motor, with its twin-scroll turbocharger, it’s certainly responsive enough, and while it won’t ever match the straight six in terms of elemental character, the power delivery is decently shapely for a four-cylinder. That said, you’ll not be at all surprised to learn that just when the six is getting into its stride at the top of the rev range, the four is beginning to flag. It's a good engine, easily exploitable and with an enjoyably light touch at lower engine speeds, but it's bubbly in character rather than bombastic. 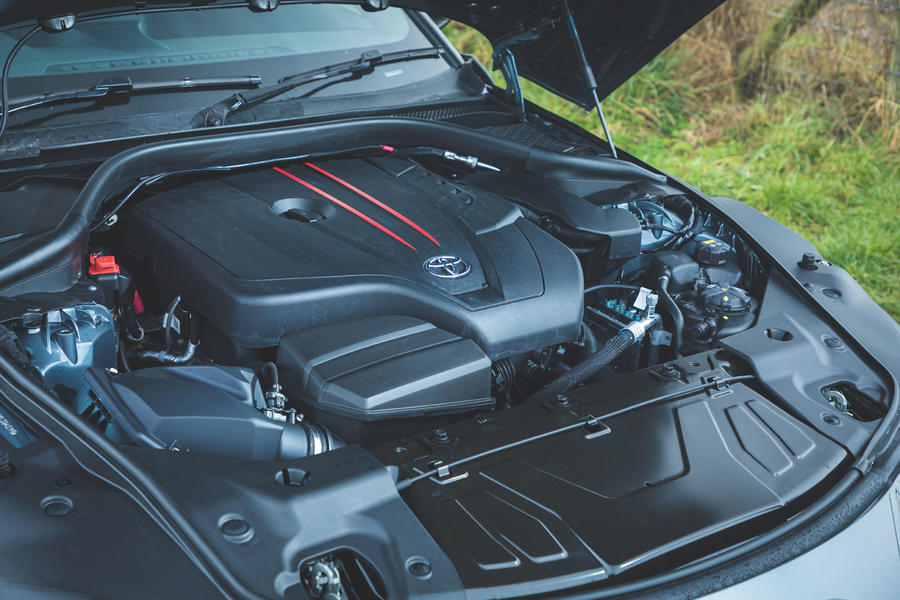 In coldly objective terms, the 2.0-litre gives you more to chew on dynamically than the 3.0-litre version, and does it for considerably less expense. In this way, it’s a bit like the four-cylinder Jaguar F-Type: junior in every way except the way it goes down the road.

With that mass out of the nose, the 2.0 handles more cleanly and responsively than the 3.0, which sounds predictable but is no less satisfying for that when you actually experience it. The more generous sidewalls of the smaller wheels also add a supple veneer to the Supra’s already excellent ride quality, even if they are slightly boomier on the move.

Most important, the Supra doesn’t feel especially under-endowed with the four-cylinder engine. It’s been tested here on damp roads, where grip levels are lower, but there was still enough precision and oomph in the powertrain to kill off worries that bone-dry surfaces would leave you unable to play around with the chassis balance.

If you therefore like the looks, and the asking price, I've little doubt Supra 2.0 ownership would leave you feeling pretty smug.

And yet. Who doesn’t want six cylinders in their life? BMW’s 3.0-litre engine undoubtedly brings another dimension to the Supra experience. The bark when you fire it up, the mountain of torque ready to fire you forwards at any moment, and the silky top-end delivery make the experience more memorable, more of the time.

If there’s a tie-breaker, perhaps it is this. Arguably, half-a-dozen cylinders are rather important to the character Toyota, via BMW, has chosen for the soft-edged Supra. In essence, they've set this car up as a scaled-down GT, so really, it needs a worthy engine. The 2.0 handles more coherently than the 3.0 and is the finer driver's car for it, but if handling is the number-one reason you’re buying a Supra, consider first the Porsche Cayman instead. 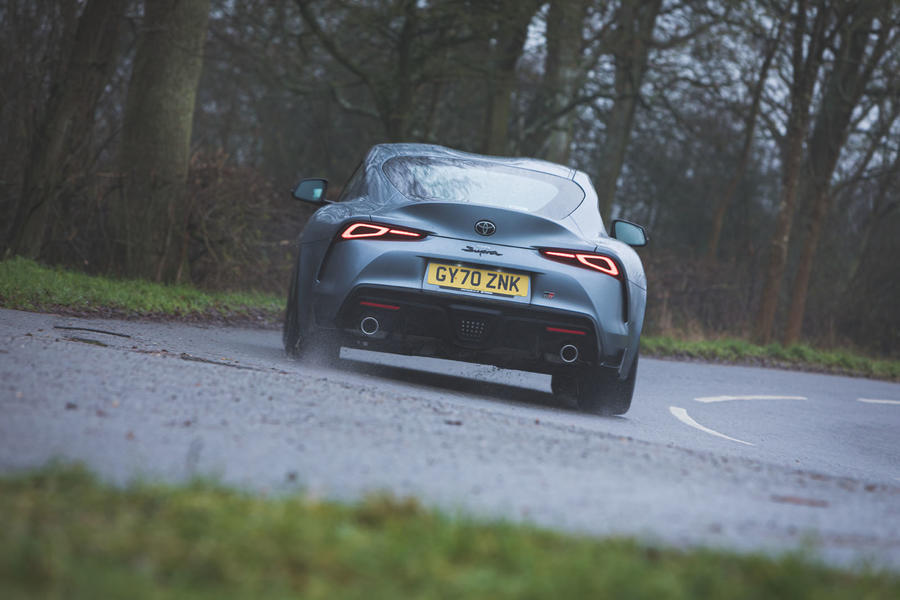 It was sad when it was just a rebadged BMW with pillbox visibility, now I would be embarassed to even call it Supra.

But, yeah, 100kg, and only 30kg heavier than Cayman. Whatever gets you through the night, is alright. :-D

For the UK market anyway- it's still £10k too much.

Yep, they look sensational.  Photos don't do it justice at all.

The looks are in the eye of the beholder. Yes, I have seen it, touched it, sat in it.

Pillbox visibility even through the windsheeld!

Exterior will never become iconic, it elicits no feelings at all in fact, just some semi-slick japanese concoction with weird lines here and there.

The M2 has more presence on the road, not to mention more power (well, the OWN the engine in the so called Supra), much better visibility, and way more practicality.

Whoever buys Toyota buys it on the exterior (which they, like you, find attractive) and maybe lower price than that of M2. There is nothing else tangible going for Toyota.