From £47,4408
Special edition commemorates coupé's rebirth, but does the Supra remain competitive in this fierce segment?
Open gallery
Close

Here’s one for you: what links the Renault Clio Williams, the Volkswagen Polo Harlequin and the Hyundai Tucson The Walking Dead Special Edition?

Struggling? Well, they’re each limited-run special editions conceived to celebrate a particular moment in their respective maker’s history, although so tenuously named as to require of their owners a chunk of research before they can begin bragging at the pub about their latest acquisition. And yes, I promise that Hyundai one is real.

The new Toyota GR Supra Jarama Racetrack Edition is a particularly tricky concept to explain, and perhaps one that will only hold appeal to avid readers of this (or a rival) motoring magazine or the people who write it. It’s named after the Madrid circuit best known as the nine-time host of the Spanish Grand Prix (before, notably, Toyota began competing in Formula 1) and far less well known as the venue for the first media drives of the sixth-generation Supra in 2018.

Back then, the Supra was still in its distinctive pre-production camouflage - a livery whose longevity and recognisability was such that Toyota would later use it as an official Christmas wrapping-paper design - although you will note that it hasn’t been replicated here.

For the Jarama Racetrack Edition, of which just 90 will be built and 30 shipped to the UK, Toyota has gone with an unmissable shade of Horizon Blue, which is teamed with matt-black 19in alloy wheels, black mirrors and red brake calipers in a bespoke paint scheme that – although it does feel special and attract its fair share of raised eyebrows – seems entirely unrelated to the one worn by the prototype.

Anyway, it’s a welcome opportunity to revisit the Supra two years on from its market launch and to consider its evolved position in a market segment that hasn’t so much changed as been turned on its head since. Its mortal enemy (and close relation), the BMW M2 Coupé, has been off sale for several months, the Porsche 718 Cayman is now available with a charismatic flat six once again, Lotus’s sports car trio has bitten the dust ahead of the Emira’s launch and, closer to home, Toyota is about to launch the markedly distinct but still threatening GR 86.

In fact, our own Matt Prior, who attended the Supra prototype drive event at Jarama, said that one of his prevailing memories of the day was a stint in a then-current GT86, which only served to highlight the superiority of that car’s chassis set-up. Hmm. 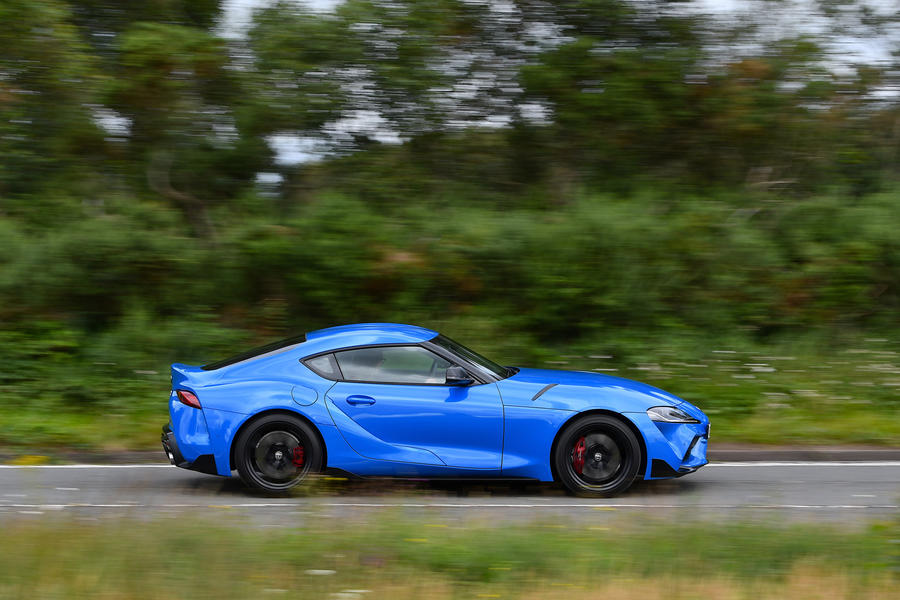 We drove Jarama Racetrack Edition #1, a privilege to which only we who could see the easily missed dashboard plaque were privy. It was more obviously marked out as a non-standard Supra by the bespoke paint job, and it’s a pretty safe bet that it turned more heads than would a standard car as a result of said scheme; so if you like your attention, it could well be the variant to pick.

It’s well worth pointing out that it commands no premium over the standard car but swaps out various functions, including a head-up display and wireless smartphone charger, for others: 3D sat-nav maps, wireless smartphone connectivity and an upgraded 10-speaker sound system. Otherwise, you would be hard pressed to pick it out on a Toyota dealer's forecourt. Oh, and the steering wheel and Alcantara seats are livened up, as you might expect, with bright blue stitching. Right, that really is it.

That means BMW’s B58 turbocharged straight six is carried over in the same state of tune as in the spiciest BMW Z4, pumping 335bhp and 368lb ft to the rear axle by way of an eight-speed automatic gearbox.

It remains a gratifyingly punchy drivetrain with no notable deficit in output or character. Leaving aside the all-too-obvious lamentation that you can’t make your own way through the ratios by dint of a stick, it feels up for a laugh on demand, if a bit muted against its free-breathing and more powerful 718 Cayman GTS rival.

Throttle response is as snappy as you would like in a road-focused sports car at this price point (spoiled are they who sniff at a sub-4.5sec 0-62mph sprint time) and, on greasy surfaces at least, the rear end is sufficiently lively that you can have a bit of fun in corners without risking your licence or life. All easy-access, well-controlled fun. Slightly sanitised, sure, but what the Supra lacks in viscerality and shock factor it more than makes up for in genuine daily usability.

For better or worse (and I would still choose the former as my hill to die on), it’s a BMW, isn’t it? So it has a lovely iDrive infotainment system, all the buttons are where you want them to be and the gear selector is nice to nudge about when you have cause to.

Not only that, but it’s also comfortable over long distances, with plenty of adjustability in the seat and steering column, nicely judged seat cushioning and a remarkable ability to coast over the worst surfaces that Highways England can throw at it. It's mighty driveable, too, even in town, with a tight turning circle and all the parking aids you could reasonably need.

In the vein of refamiliarising ourselves with Toyota’s top-rung sports car, though, we must highlight again the faintly cramped cockpit and sub-par visibility in both directions. Could Toyota be tempted to sacrifice the characteristic double-bubble lid for a panoramic sunroof option? Doubtful, but it would air out the cabin nicely.

Aside from that coat of paint on the calipers, the chassis remains untouched, so while its effective bump cushioning and general rolling refinement are welcome traits indeed, the Supra feels like it stops just short of the edge when you really push it. You can tip it into a hairpin at quite a lick and be confident of your safe exit on the other side, but you won’t come away thinking: “Wow, I did that”.

The steering is impressively accurate and the dampers steadfastly resistant to roll, but the front end could do with being a lot more talkative, for sure, and the manual gearbox paddles tuned for snappier shift times if this is to remain a compelling alternative to some of its more overtly driver-focused rivals.

Which brings us back to the Racetrack element of this car’s name, at long last: is this a case of a car being linked to a heritage it can’t really claim? The less potent 2.0-litre Supra can be similarly specified in white-over-black Fuji Speedway trim, but you have to wonder if such a marketing ploy only serves to draw attention to some of the model's less racy characteristics. Plus, you won’t get away with even a hint of kerb rash on those matt-black rims. 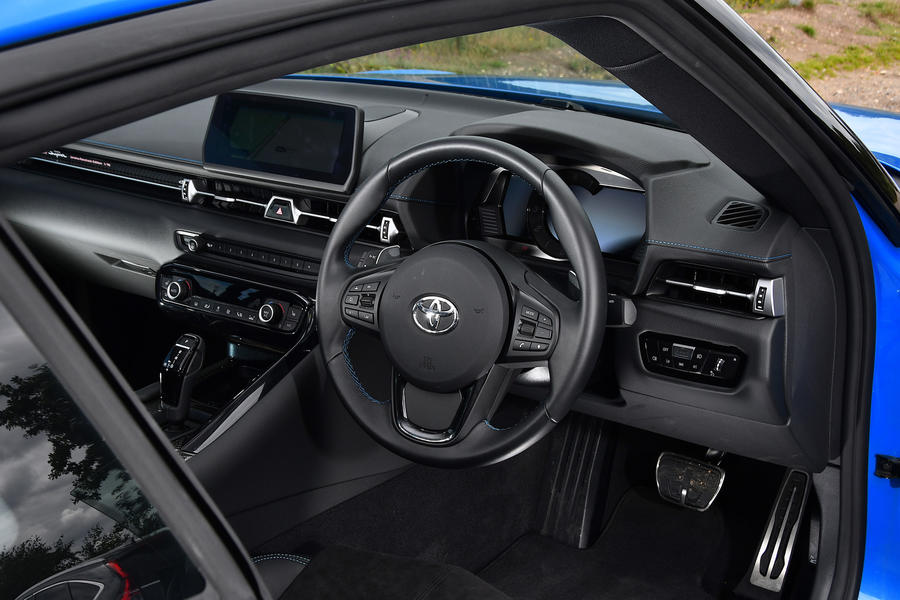 Honestly, why not? It’s the same price as the standard Supra, and if you like the colour, you should snap one up.

Taking the aforementioned Williams and Harlequin editions as examples, it seems likely that such exclusivity will stand the Jarama Racetrack Edition in good stead when it comes to its residual value, so there’s that element to consider as well. 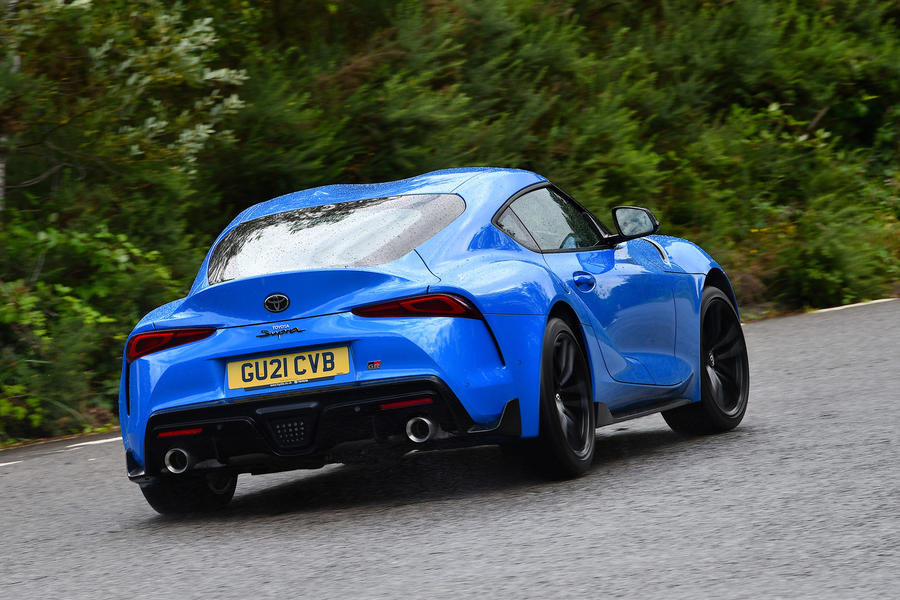 Well said Supra Fan! I also have a 3.0 Pro on order and can't wait for delivery. The negative comments are like a broken record from people who more than likely haven't even driven the car.

You'd think BMW was a basement brand, using the brand name as a slur. That the ZF 8speed transmission is somehow an inferior product but has been well proven in many applications.

I thought long and hard at other options as I had always promised myself a Cayman, but a friend told me how Porsche servicing costs make BMW seem cheap. Then there's the flat 4 turbo - which sounds as refined as a chainsaw. When the 4.0 GTS comes onto the used car market in a couple of years time the 4 cylinder cars will plummet (as will the 981's, which are crazy money for 6 year old cars)

The Alpine? After having an AX GT from new many years ago I was stung by their electrical gremlins - the car was great, lovely fluid handling - it floated over badly surfaced roads but after 3 years or so the ghosts in the machine started to play up. I wouldn't buy French cars again - well, not Citroen or Renault anyway due to other friends experiences with Renault that mirrored my own.

Supra fan 26 August 2021
I think it looks brilliant. Toyota should be congratulated for bringing the Supra to the market. Lots of cars share components with other companies. The Gt and Gr 86 are a collaboration between Subaru and Toyota. Yes the Supra shares components with the Z4 but without this the car would not exist.
The Mclaren F1 had a bmw engine and you cant get much better than that.
The straight 6 bmw engine is a perfect engine and having driven a Supra it drives exceptionally well. Its that good im buying one.
Zapetero 25 August 2021