9
Long-awaited sports coupé is driven at last, but leaves us with as many questions as answers
Open gallery
Close

It’s still dazzle-camouflaged outside and carpeted like they’ve skinned Sweep the puppet and draped him over the switchgear inside, it’s still eight months away from production and it’s still very much in prototype form. I’m accompanied by a minder whenever I go near it and they’ll barely tell me a single flipping statistic about it.

Because the numbers don’t matter, they insist. (Which begs the question: why not just tell us, if they’re so unimportant?) All that matters at the moment, they say, is the way it drives and the way it makes you feel.

And this, I’m thrilled to report, I can tell you. I’ve driven it, quite a lot and quite fast, at least by the standards of events that only have four prototype cars available and quite a lot of Toyota regional managers to demonstrate them to.

But it’s nonetheless yet another painful ‘plink’ in the agonising drip-feed of Supra information that, let’s not forget, began in 2012 when BMW and Toyota announced they were going to work together. Does Toyota really need seven years to build a car?

Of what we know, then, only this much is confirmed: the Supra has a lower centre of gravity than a GT86, despite having a 3.0-litre straight-six engine, which drives the rear wheels through an eight-speed automatic gearbox (BMW/ZF respectively), while a BMW M Active limited-slip differential sits at the back axle. As with the BMW Z4 version, the weight distribution will be 50:50. I still can’t tell you the exact power but 340bhp sounds about right, as does 350lb ft, and the kerb weight is likely 1500kg.

The body, despite being a blend of steel and aluminium, is as rigid as a Lexus LFA’s carbonfibre one. The wheelbase is around 2440mm and the track approximately 1600mm.

There will be faster and, I suspect, slower versions of this car later, to make the sums add up for Toyota, so the slow release of information will go on even after production begins in May. You’ll see the final car, shorn of its disguise, at the Detroit show in January.

And we can add this to what we know: it’s good to drive. 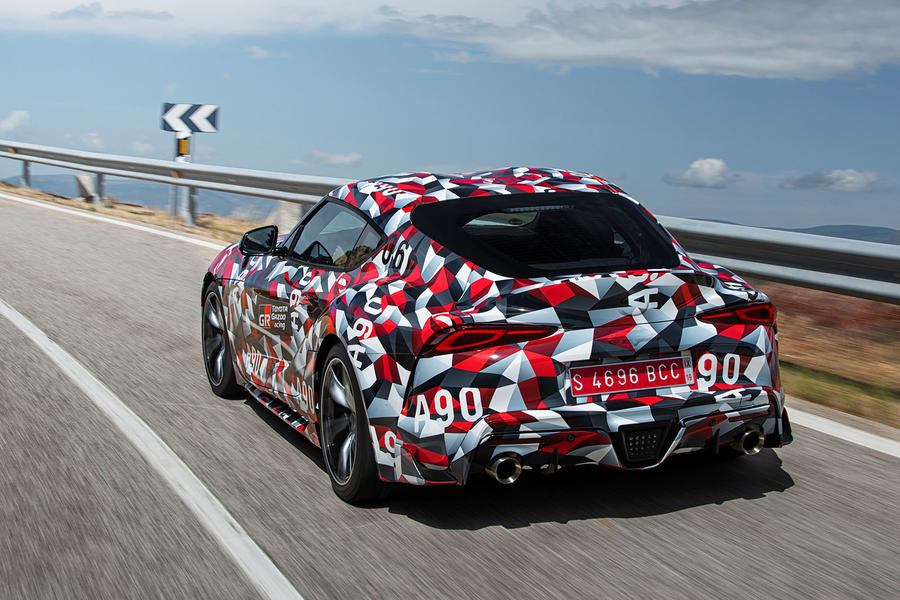 Our route is a two-hour loop from the outskirts of Madrid, so partly in the city, partly on the motorway, partly on country roads, and then – goody gumdrops – partly at a race track.

Because I’m sharing the drive with a colleague from another magazine, even though I’m contractually obliged to pretend there is no such thing, and because there’s always a minder in the Supra, sometimes one of us is following in a GT86 while the other drives the Supra, which I mention for reasons I’ll come back to.

First, then – getting into the Supra. Despite the drapery inside, you can sense it has is a BMW-centric interior. The switchgear is BMW, the driving position is long and straight, the gearlever is BMW’s. Does that matter? I doubt it. The iDrive multimedia system is better than Toyota’s alternative, although there’ll surely be a Toyota face on that, as there is on the instrument binnacle, while the steering wheel is thinner of rim than BMW uses and round. Praise be on both of those counts.

You sit low, peering through a letterbox windscreen with a high window line and the curved bonnet spearing off into the distance. No idea whether it is (it probably is) but it immediately feels bigger than, say, a Porsche 718 Cayman, whose corners are easier to place, owing to better visibility. You are aware at once where the Supra’s engine is.

It’s a refined engine and drivetrain, though. If there’s work still to be done on the calibration, it’d be news to me. A six is always smooth but a BMW six, turbocharged here, is incredibly so. Step-off is smooth and the Supra, even in standard drive mode, is unencumbered by the response modern autos sometimes give, where they feel like they’re trying to lug things out from revs that are too low. Stop-start wasn’t functioning, which probably helps, mind.

Push the Sport button and the throttle and gearbox response sharpens, but there are gearshift paddles, so if you want a quicker response it’s probably more rewarding to take control yourself. There’s no word on a manual gearbox yet, but Toyota would like one.

Passive dampers will be standard but adaptive dampers were fitted to the cars we tried. These, too, firm up via the Sport button, as does the steering weight, although in regular daily driving there’s no need: the underlying compliance is welcome but there’s no sense that the body weight is getting away from it. 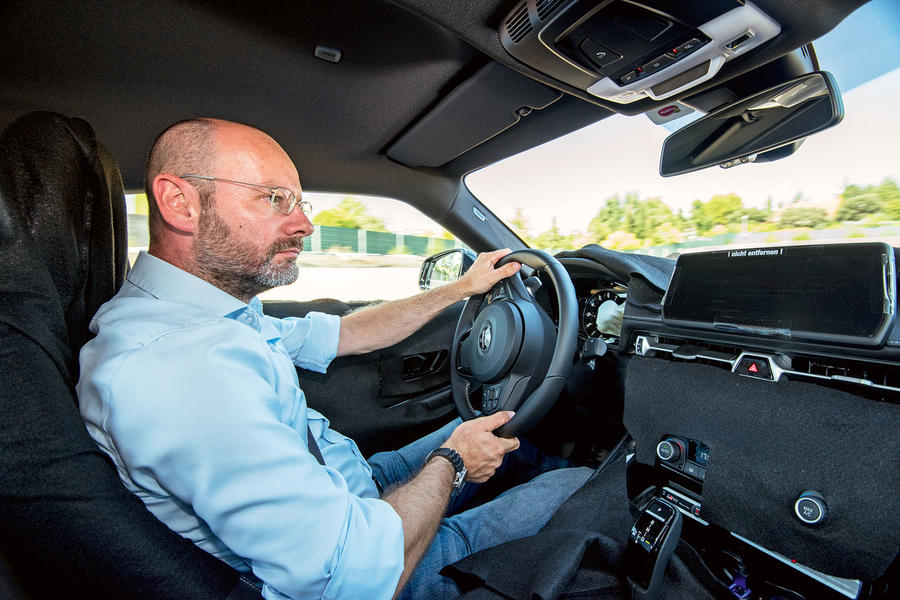 The Supra feels like a stable, well-rounded sports coupé. Its engineers say they did 90% of its development work on the road, and I think it shows. In town, on the motorway, it’s mature in a way that, say, a BMW M2 Competition or Alpine A110, perhaps even a Cayman, are not.

It’s only when you get on to a country road, then, that you start to push the boundaries of the standard suspension setting’s limits. The steering is smooth, progressive, sharper off the straight-ahead than some front-engined coupés, presumably to give an extra sense of agility that, compared with a 718, the Supra simply can’t have. Body roll builds progressively, but this is where you want the dampers firmed because, without it, as you get back on the throttle and the differential begins to worry about acceleration, you feel the body’s mass shifting in a way I don’t think you would in a Cayman.

Swapping into and following in a GT86, though, you’re reminded of the advantages that minimal mass gives you: sure, the GT86’s engine is wheezy but, working it hard, you can carry speed and enjoy delicate fingertip steering responses that are denied to the bigger car. It’s a reminder of how exceptional the GT86’s chassis is; which I suspect wasn’t the objective of the exercise.

But still, there are other things a Supra can do. The engine is extremely sweet, smooth and broadly responsive but happy to rev. In Sport mode, a flap opens in the exhaust and Toyota says there’s more work to do on the induction noise, probably via sound tubes off the engine – so real, rather than fake noise. But, unlike a Cayman, you’re happy to let it sing, or sit at high revs pre-overtake.

And it’s clearly a chassis that can handle more power. Nowhere is that more evident than on a circuit where, Sport mode engaged, the Supra displays the same balance as it does on the road, only enhanced. The suspension maintains good control but serious compliance over bumps or kerbs; where those would thump through in an M2 Competition, the Supra glides across, as a Cayman might. It doesn’t rotate as willingly as a Cayman or, from my limited experience, an Alpine A110, but that’s no surprise given where its engine is.

With stability control set to ‘have a little slip’ but not ‘off’ (the minder still alongside, see), you get to feel the balance: steering that’s smooth if not laden with feel, a hint of entry understeer, a hint of exit oversteer and the knowledge that you could have a lot more if given the opportunity. Some of my favourite-handling cars – an Aston V12 Vantage S, that GT86 – have the kind of balance the Supra displays, albeit usually with more rawness. 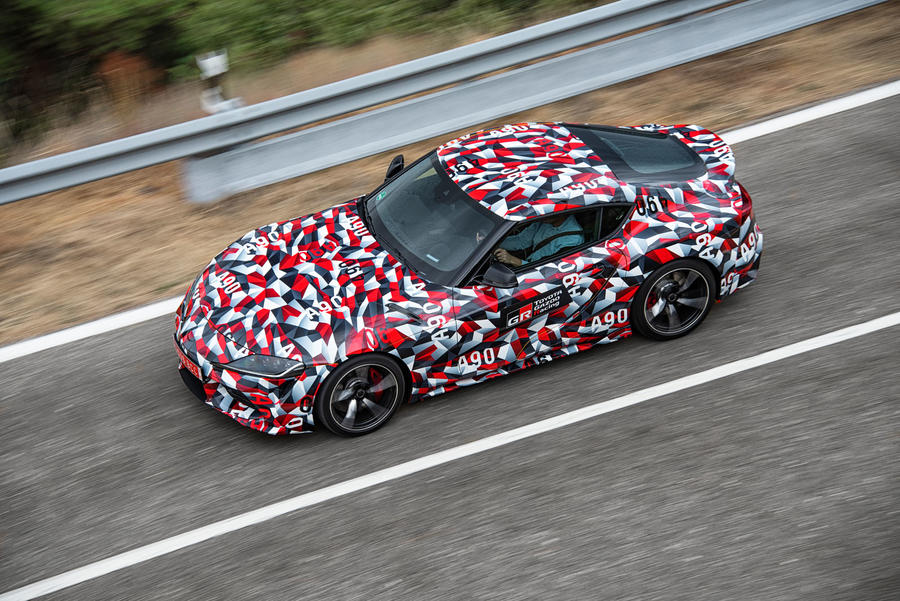 But that’s fine. It is, in this spec, 90% road car and yet still happy on a hot circuit, being pushed hard without overheating its steel discs, offering more handling balance and playfulness and more reward the more you push it.

Toyota has taken a delicate path with the Supra: a road car that gives more when you ask for more. And where, say, an A110 or M2 Competition might give you more all the time, that’s no bad thing. In terms of daily maturity, it’s closest, then, to a 718 Cayman. Curious.

A few years ago, a Cayman was regarded as unbeatable. Now everybody wants a crack at it. On this showing, Toyota is getting as close as anyone. 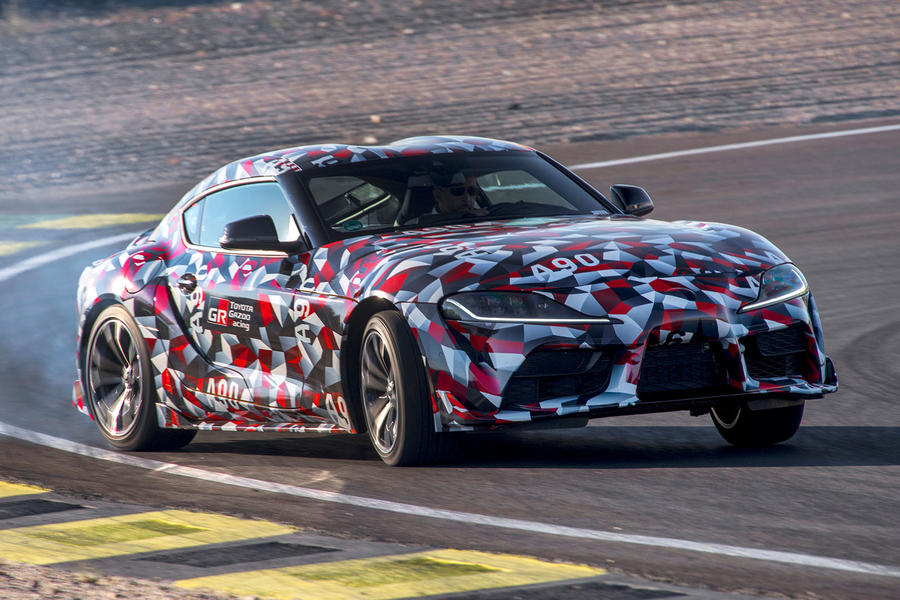 Not sure about the Roof either, not a cool as when Peugeot did it with their sportscar...

Shame no back seats...

Sounds brilliant - but one of the cool things about the GT86 is the just-about-usable rear seats, something its competitors just dont have.  Makes it a viable second car for me.   Shame they couldnt squeeze a couple in.  Doubt many will care though...

Not sure I get the 'its a badge engineered BMW' though.   Sounds like the best of both.  Much like the GT86 owes as much to Subaru as Toyota.  Didnt do that any harm...

The Toyota version looks much

The Toyota version looks much better than the Beemer.