This is the new Subaru XV e-Boxer and, unfortunately, there are absolutely no points up for grabs for guessing what that little ‘e’ might stand for.

With practically every other manufacturer under the sun making the move towards electrification it’s not surprising that the star-spangled Japanese marque has followed suit. It might not have been as quick on the uptake, but it doesn’t exactly have the Volkswagen Group’s arsenal of resources (or its market share, for that matter) to call upon.

Speaking of the Volkswagen Group, ever since Dieselgate effectively stripped the Subaru XV of its oil-burning engine, it’s a car that’s been an easy target for criticism, too. Not only were the remaining 1.6 and 2.0-litre normally-aspirated petrol boxer engines particularly asthmatic, but being paired with a CVT gearbox and Subaru’s trademark symmetrical all-wheel-drive system meant they weren’t particularly refined or economical either.

Of course, the XV was - and remains - stable, secure and reasonably comfortable on the road; and is still far handier off it than the average Seat Ateca. But those aforementioned shortcomings ultimately meant it failed to cut the proverbial mustard in the context of the wider class. 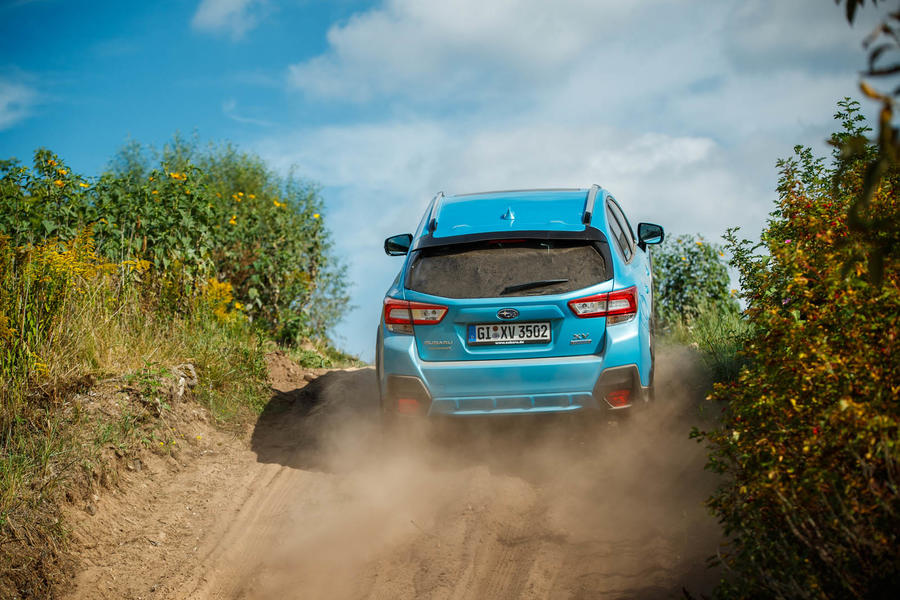 Theoretically, this new e-Boxer unit should help to right some of those wrongs. It sees a small 16bhp electric motor (and 118V battery) paired to the existing 148bhp 2.0-litre flat four, which combine to drive all four wheels via a gently recalibrated version of Subaru’s CVT. This makes driving the XV on electric power alone a possibility, but don’t assume this is a bonafide Toyota-style hybrid powertrain.

In fact, the instances where you rely on electricity for forward propulsion are fairly fleeting. Keep your speed below 25mph and all but remove your foot from the throttle and you might be successful in achieving a few seconds of electric drive. Even from step-off the combustion engine will kick in after mere metres - and kick in it does. There’s a noticeable shunt from the driveline as the engine sparks to life and the CVT flares its revs in anticipation, before you set of in the usual slightly noisy fashion we’ve become accustomed to in Subaru products.

That said, if you lift off the throttle when travelling at speed the petrol engine will shut down, allowing for emissions-free coasting. It’s instances such as these that, Subaru says, contribute to the e-Boxer being up to 10% more fuel efficient than the standard 2.0-litre unit.

The electric motor also contributes to a minor improvement in accelerative responsiveness, too, though this is very much still a powertrain that needs to be worked hard. The combustion engine’s 143lb ft of torque comes in at 4000rpm, but you need to push past 4500rpm to make what feels like meaningful progress. Just be prepared for the cacophony of noise from the engine and the CVT - not to mention the dip in economy - that accompanies such behaviour.

This leaves you with the sense this hybridised powertrain is best suited to low-speed, stop-start urban environments rather than open-road settings. But even here, it lacks the refinement of the full-fat hybrid architecture you’d find in, say, a Toyota RAV4 or a Toyota Corolla. Toyota has been doing this for far longer than Subaru, however, so perhaps we’ll see the e-Boxer powertrain become smoother and more coherent in time. 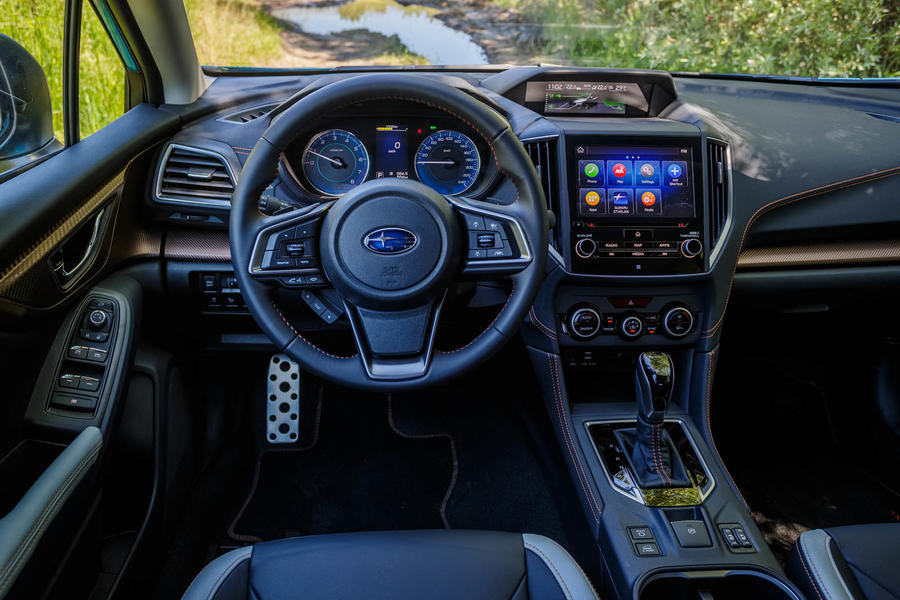 With prices starting at £28,995, it’s not exactly cheap. But there’s a strong level of standard equipment; it feels well-built, spacious and strangely wholesome and honest inside; and it retains that secure, sure-footed handling the brand trades on. A veritable arsenal of driver aids and safety assist functions come courtesy of Subaru’s EyeSight suite, too.

It’s not an engaging car to drive, but Subaru is open about the fact its cars aren’t aimed at driving enthusiasts anymore. That makes it tough for us to genuinely like the XV e-Boxer, but those who care more about safety and moderate off-road ability probably won’t mind too much. 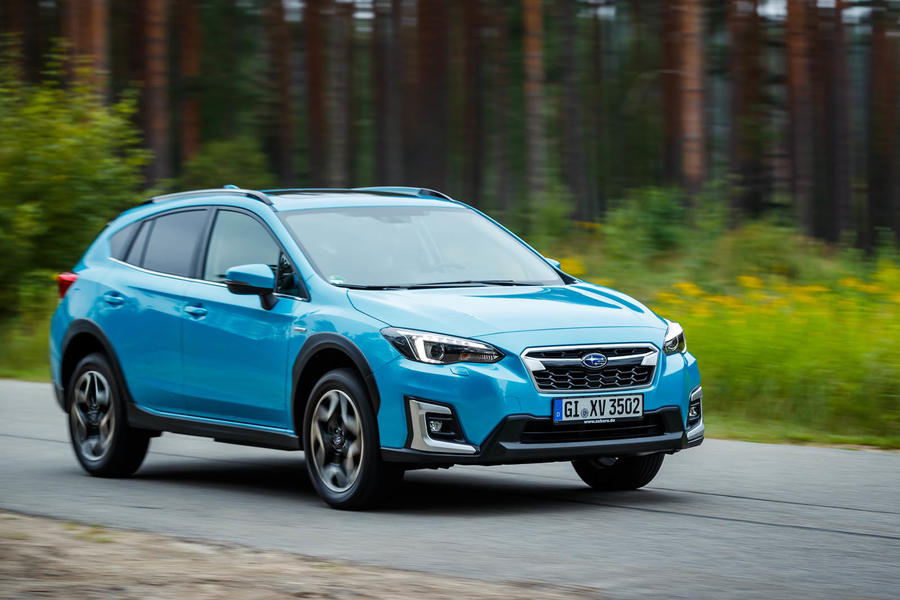 Re: there's nothing wrong with a CVT

I would tend to agree, we have a 2.0 XV as a family car, my wife drives it, for ferrying the kids to school, and while it is a bit thirsty, am prepared to put up with that for the security and safety of the XV. We have had several Subaru's over the years and the reliability and build quality are second to none, even the German's can't get close in my opinion.

I think subaru are stuck in terms of UK / euro markets are very small for them compared to North America, so their vehicles tend to be geared towards those markets - auot's for lazy, obese yanks.

The XV i would have thought would have been great fitted with the 1.6 turbo that was in the Levorg. As someone else pointed out, its such a shame they do not import the sporteir models, such as the Levorg STI.

I think subaru UK are missing a trick

Re: there's nothing wrong with a CVT

The CVT is favoured by Subaru as you say DVB78, for its efficiency and reliability. Plus it works well with their eyesight safety system.

I can't really fault it too much in my Levorg. Especially as compared to my previous Impreza's, this car will easily exceed over 30 mpg urban, sometimes over 40 on a run. It's a case of remembering that if you bury the go pedal to the carpet expecting performance, it's best to describe it as a self preservation mode takes over and delays any thought of accelleration.

And yes, seeing as they're not selling a biblical proportion of cars in Europe, it wouldn't hurt to import some of the more performance orientated versions of their range to raise their image and profile. After all, that's what atracted many, including myself to the marque.

Is there s more foolish thing

Is there s more foolish thing in motoring than persisting with that ridiculous gearbox?
si73 13 September 2019

There's nothing wrong with a

There's nothing wrong with a CVT, they're smooth and economical cheap and reliable, far more preferable than a dct. In this instance it seems to be it's application to an underwhelming engine and hybrid system.

On a different note this appears very similar to Honda's ima which also added electric power to bolster engine power, though honda added it to small engines, which, in a similar vein to downsized turbos gave the performance of a larger engine.

The limiting problems with Subaru have been their insistance on using their unique selling point (I have no objection to that - especially as I own a CVT Subaru Levorg) permanant AWD and that boxer engines are inheritantly unclean emissions wise, that was one of the reasons given why Alfa Romero switched to FIAT sourced powerplants.

Also for example, take my Subaru Levorg, available back then as a 1.6 turbo 168 BHP 185 ft/lb torque. The JDM and Asian markets also got a 2.0 296 BHP 300+ ft/lb torque petrol motor. Guess which one has the ability to be upgraded for more power, but the CVT gearbox can't handle the power increase? Yes, the 1.6 model. I'm sure that traditional Subaru fans in Europe, let alone the UK would have loved to get hold of the Levorg 2.0 STI if it had been offered to them.

Sure, they could fit more powerful engines into their cars for the rest of the world, as more powerful engines are fitted to their own Japanese domestic market. However, in several other continents they have to meet emission and try to get near acceptable fuel consumption targets. Equivilant Audi, BMW, Mercedes Skoda etc vehicles tend not to be permanent AWD and are also available in diesel.

I like Subarus, but agree it’s a real shame they don’t bring hotter versions to the UK any more. They are a niche player here, so why not sell niche models at a higher margin?

Is it a lack of imagination from the importer?

This XV might not excite road testers but it’s a brilliantly safe and dependable car.