From £17,7958
Is the Octavia still a supreme box-ticker in its new generation? We find out in the UK
Open gallery
Close

For a long while now, the Skoda Octavia has been a handy get-out-of-jail-free card for British motoring journalists.

Ask my colleagues whether they’ve ever replied “Probably just a Skoda Octavia, mate” when asked by a stranger at a party which car they should buy next and I suspect most will say they have.

The great thing is that were this person to then take us up on our advice, we would feel entirely comfortable about it. For ages now, the Octavia has been highly regarded for its ability to blend practicality and refinement into a relatively affordable and dependable package – something that has helped Skoda shift some 6.5 million Octavias since the original’s introduction in 1996.

Now there’s the fourth-generation model, and it has just landed in the UK. And although it essentially uses the same MQB architecture as its predecessor, initial test drives in Europe showed that Skoda hasn’t lost sight of the traits that have long made the Octavia so recommendable.

In fact, closer inspection suggests the brand is attempting to broaden the Octavia’s appeal even further – a tough gig given the solidity of its foundation. It’s a sharper-looking thing than before, both inside and out; a slightly more fulfilled version of the design language first seen on the Scala is present, with bolder lines and creases, as well as slick new light clusters front and rear, doing their bit to lift the Octavia ever so slightly out of the realm of relative visual mediocrity that it previously occupied.

The cabin’s design is also tidy, with its new, decidedly minimalist approach being facilitated largely by the 10.0in infotainment touchscreen that protrudes from the dashboard plateau of our SE L First Edition Octavia Estate test car.

Save for a few handy shortcut buttons beneath, this touchscreen controls the vast majority of the car’s features. The system is easy enough to navigate, but physical controls for things such as the air conditioning would undoubtedly be preferable.

There’s plenty of flexibility when it comes to the driving position, and the Octavia’s 22mm growth spurt means there’s now more space in the back, too. Leg room is abundant, although the optional panoramic sunroof might cause you to scrape your head against the ceiling every now and then. But it’s boot space that remains the Octavia’s party trick: few people would turn their noses up at 660 litres in an estate car of this size. 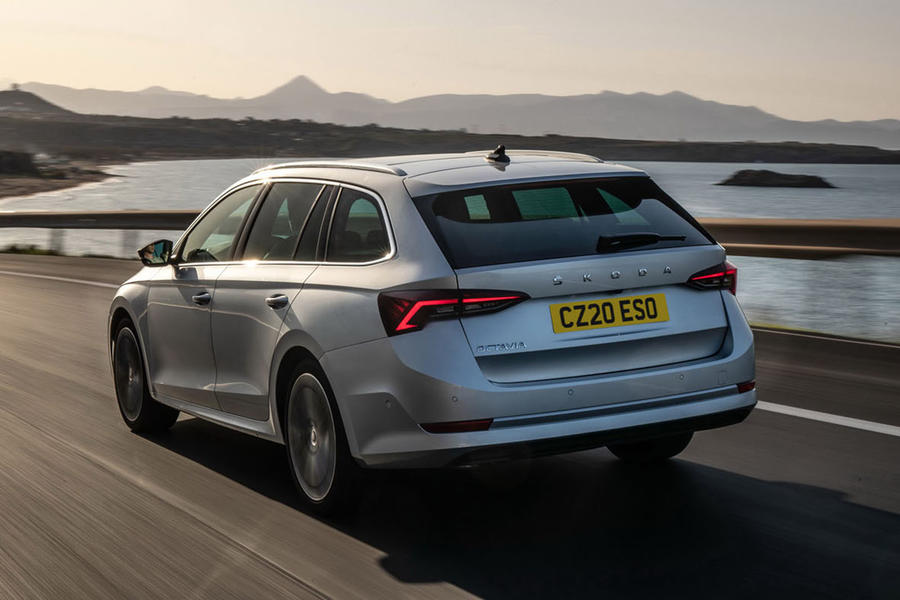 To drive, the Skoda Octavia remains as easygoing and understated as ever. There’s little to get excited about, granted, but the relaxed steering is nonetheless accurate and sensibly weighted and allows you to track the car’s nose along the road without ever needing to second-guess your inputs.

Body control is decent enough through sharp bends, as is grip, and the 2.0-litre diesel engine provides useful low-end punch (with peak torque of 251lb ft), excellent refinement and respectable fuel economy; we saw 57mpg over the course of our mixed test route.

The seven-speed dual-clutch automatic gearbox is a slick operator for the majority of the time, too, although it can easily be caught out at junctions and roundabouts, when you might suddenly need to accelerate from low speeds.

There’s an appealing suppleness to the ride. Our test car came without the adaptive dampers that feature as part of Skoda’s Dynamic Chassis Control option, but its manners were perfectly civil on 17in alloy wheels. Vertical body travel is reined in pretty effectively after you hit large lumps at speed, while intrusions from most ruts and craters are smartly rounded off without too much bother. Only the most decrepit stretches of road cause the Octavia to become a bit too excitable and filter a small amount of uncouth noise and vibration into the cabin.

But the truth is that the Octavia is never so uncomfortable as to give you serious pause for thought. It would be interesting to see how the new Volkswagen Golf stacks up against its Czech relative in terms of ride comfort. We’ll aim to find out soon.

Presently, the 148bhp diesel engine fitted to our Octavia is only available in the flagship SE L First Edition model, which is priced from £29,515. That makes it more expensive than the range-topping new Seat Leon Estate (£27,895), although it’s worth pointing out the Spanish car isn’t yet available with a diesel engine, so expect that gap to close up later this year. The Octavia is fractionally cheaper than the comparable Ford Focus Estate, too. 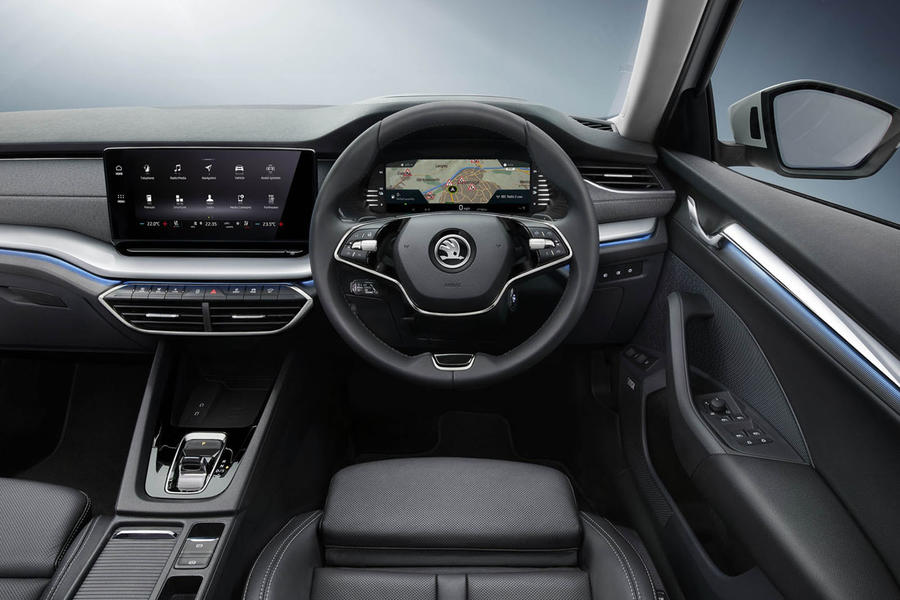 The Focus is undoubtedly the more interesting car to drive and, for some people, its extra agility and generally more engaging driving experience will count for a lot.

But let’s not discredit the Octavia here. Yes, it’s rather plain from an enthusiast’s point of view, but as a smooth, practical and competitively priced box-ticker, it hits its brief very convincingly indeed. 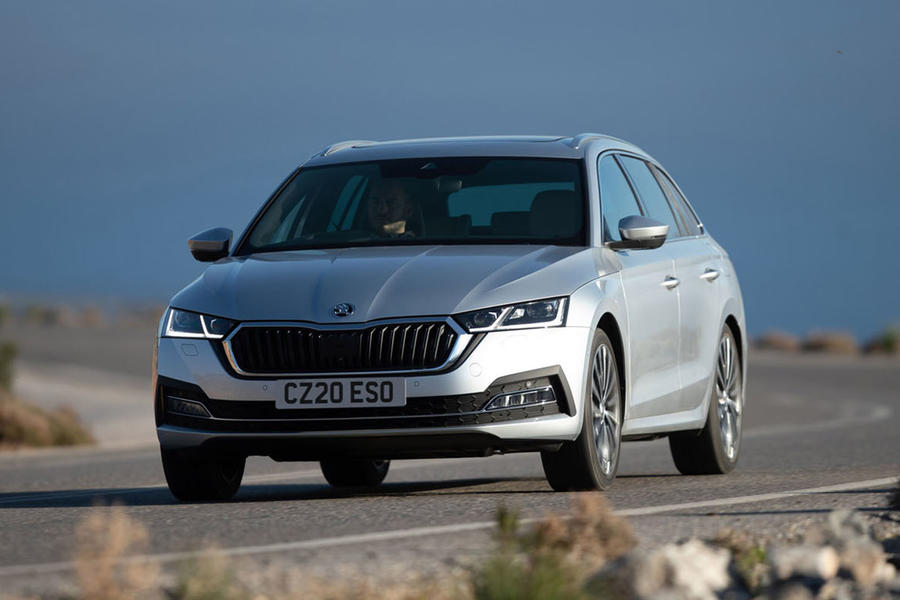 I loved my 2015 Octavia 2.0 TDI Estate. Quick enough and really good mileage but the depreciation was horrific. So glad i bought it on PCP as it was worth over £2k less than the MFGV when it went back despite being under the mileage.

I wanted to repalce it with a 1.5 TSI model but Skoda had wisely factored the depreciation into the PCP making the Octavia £85 pm more than a Karoq. I know which is nicer to drive and more economical but it wasn't worth the premium.

Skoda Seem to Actually Listen to What Customers Want.

Scotty above has nailed it, the reason people like the Octavia is because it gives so much flexibility - including a spare wheel option (hopefully kept in this new version) which does actually matter to high mileage and sensibly minded drivers.

I went down the route of looking at the (then) Auris Tourer hybrid as a company car, British built and all that, but at launch it had no spare wheel, so I got another Octavia. Have had 3 since making a total of 6 Skodas. At the time I asked Toyota about it and they were very keen to tell me that a car with no spare and no run flats was ideal as a high mileage company car for late night long distance journeys - despite me just having lost £60 of frozen food in the boot of a Prius after the foam kit couldn't handle one screw and me mentioning that Kwik Fit are not open at 11pm and in the middle of nowhere. I also never bought a Corolla Verso to replace an existing one because Toyota decided that didn't beed a spare any more either.

The Octavia 3 estate can give you a 3 level boot, that's a full size spare, then another compartment that is about 10 inches high to put all your loose stuff in, and then the actual boot floor, plus massive rear leg room, and a flexible options list. If the Octavia 4 carries on with that there is little that can touch it. Can only hope it stays as practical with the upcoming hybrid.

That's why Skoda win, they generally give you what you want instead of telling what you should and can have. Long (hopefully) may it continue.

The problem with Skoda is... Skoda

Probably an excellent car in all respects but the name, Skoda.
Skoda, Skoda, Skoda, No, it's just not floating my boat no matter how many times I say it or write it.
Just Saying!
12:15
View all comments (15)