Seat knows not to mess with a good thing, which is why the lightest of light touches has been used to update its best-selling Seat Ateca.

The first Seat crossover SUV has managed to sell more than 300,000 units across Europe since its introduction four years ago, and although competition within the crossover class has never been stronger, few rivals have managed to best it for handling or driver appeal.

A slight shuffling of the Seat Ateca line-up for 2020 replaces the top-level Xcellence trim with a new, soft-roader Xperience model, which gets a few lightly ruggedised exterior additions. The black plastic lower trim and body-coloured wheel-arch surrounds are subtle and certainly don’t indicate any increased off-road potential. Largely because there isn’t any.

Visible exhaust pipes have also gone, apparently because owners said that unless they were buying a sporty range-topper, they’d rather do without. So they’re absent on all but the Cupra Ateca. LED headlights inspired by the larger Seat Tarraco and new front and rear bumpers are the other big visual changes, so this updated model maintains the outgoing car’s sharp lines and sporty appearance.

The engine line-up includes a revised 1.0-litre TSI three-cylinder petrol, four-wheel-drive-only 2.0-litre TSI and two 2.0-litre diesels, but Seat predicts the four-cylinder 1.5-litre unit, available with either a six-speed manual or the seven-speed automatic transmission tested here, will remain the most popular choice among customers. 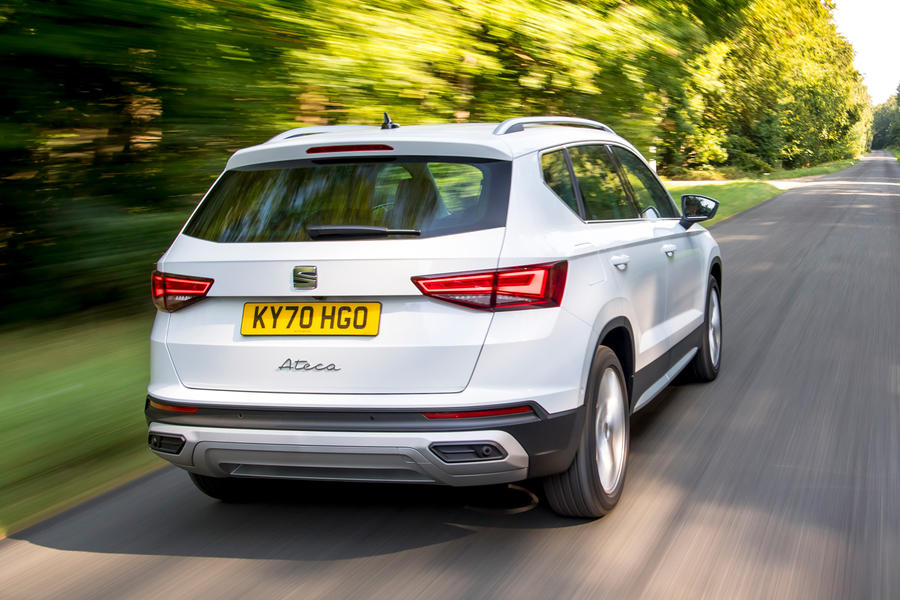 Interior changes are largely focused on technology, with the 9.2in infotainment system (standard on all but the base model) receiving a redesigned interface that’s colourful and responsive. Gesture and voice controls are meant to reduce distractions, but the former was a little finicky in use.

Safety systems have also been strengthened across the board, although only the Xperience trim gets the new side and exit assist. Flashing lights and an audible warning now let you know if you’re about to lose a door to a passing car when getting out.

A few new materials around the door cards and dashboard help the Ateca to keep pace with the rest of the class for fit and finish, although scratchy hard plastics are still within easy reach. The new-shape steering wheel is nicely bolstered and isn’t too thick, while the abundance of buttons on it are at least sensibly grouped to make finding the right one easy.

The steering feels nicely weighted, with a sense of directness that inspires confidence as you press on through corners. This new Ateca is still nimble enough, with the same reassuring levels of grip that help make for a more engaging drive. It can’t completely disguise its tall-sidedness but does so better than almost all direct rivals.

The chassis and suspension remain on the stiffer side, and although they are comfortable enough across most road surfaces, they aren’t overly absorbing of larger bumps and humps.

The 148bhp four-pot powerplant is a lot smoother than the 1.0-litre three-cylinder and its extra potency feels better suited to a car that will likely be used for family lugging duties. It pulls to cruising speeds with minimal effort, the automatic gearbox swapping cogs deftly across all driving modes. Sport mode sharpens the throttle response and paddle shifters give direct control but still lack some of the engagement you’ll find with the six-speed manual. 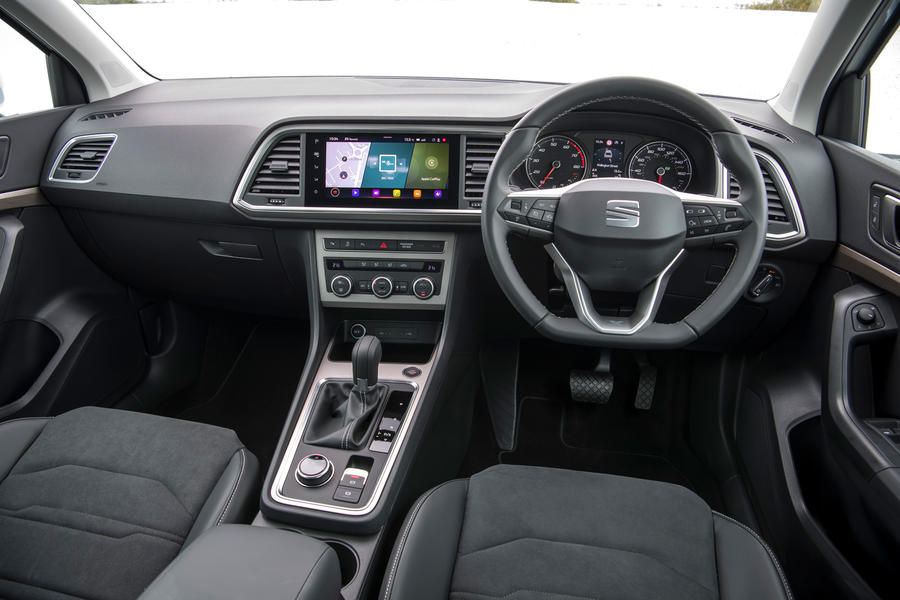 The Ateca was already a perfectly practical crossover with a respectable degree of dynamism and this latest round of updates does nothing to diminish that. Technology improvements help it to remain competitive with the rest of the class and incorporating what were previously optional extras into the standard trim levels means anyone already in the market for one now stands to get slightly more for their money, which is never a bad thing.

Keener drivers not tied to the SUV bodystyle will still be served better by the Seat Leon hatchback, but the Ateca represents the more engaging end of the crossover class for those who must have a raised seating position. 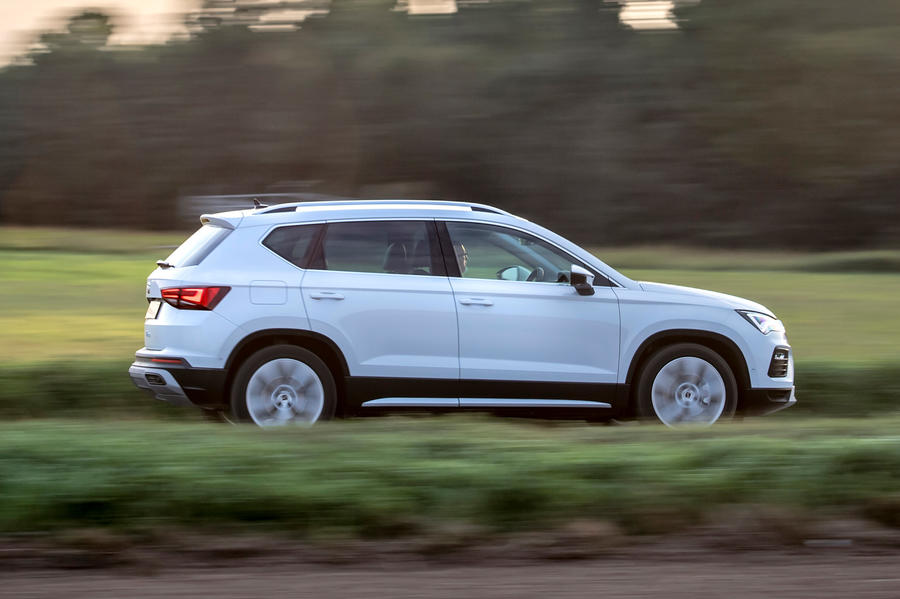 Feels built to a price

I bought a 1.4 xcellence back in 2017 which I kept for 2.5 trouble free years. It was a great car, can't say a single thing against it. Did I buy another? Nope, I moved over to Skoda.

The trouble with SEAT today is there are no options, just like buying a Japanese or Korean car. So if you want electric seats, you have to upgrade to the next model and pay thousands for equipment you never wanted.

There's also a problem with the infotainment. With other VAG brands you simply download and install the latest map updates, but with SEAT you have to visit a dealer, which costs. Yes there are workarounds, but it's not simple.

Then there's the assistance cover. With other VW brands you get 3yr assistance, with SEAT it's only 2yr.

As for materials used in building the car, Skoda really is class above SEAT ( I think Skoda is a class above VW these days ).

SEAT does feel the much cheaper built car but as I say, I never had a problem with it.

The chief reason why it's

The chief reason why it's more engaging to drive than most in the 'crossover class' is that essentially it's just a tall FWD hatchback. A Forester or even a Suzuki Vitara would crush it away from the tarmac. What are you comparing it with?

Amazing! This is an extremely wonderful article. Thanks for sharing, Stay safe. By the way, you can get a great price on Aprilia Tuono V4 1100 RR Misano Limited Edition Motorbike only on Team Xtreme Houston. Visit our Website for more details.

I do like VAG cars but I will never understand the VAG UK product management.  Eg Heated Steering wheels (once you've had one, you never go back).  I can specify a heated steering wheel on Audis and SEATS in Europe and VW and Skoda in UK but not on UK SEATs and Audi's? Do they think no one in Yorkshire or Scotland buys Audis and SEATs? Same with these SEAT spec levels, you can't heated seats without having leather?  Why, you can on a Skoda and VW.......