The big news here is that the estate version of Renault’s accomplished C-segment model is now available as a plug-in hybrid, with the tax-friendly status and feel-good eco credentials that the addition of a plug socket and supplementary electric motor inevitably brings.

It joins the newly released hybrid Clio supermini and the plug-in Captur crossover in Renault’s expanding ‘E-Tech’ family of partly electrified vehicles, and the hope is that these new models will help warm customers up to the idea of owning a fully electric vehicle (such as the Renault Zoe) further down the line.

They all make use of the same normally aspirated 1.6-litre four-cylinder petrol engine, which is paired with a smaller electric motor and an integrated starter-generator. But where the Clio is only a conventional hybrid and so comes with a 1.2kWh battery for short bursts of electric-only driving, the Captur and Mégane gain a larger 9.8kWh (7.5kWh gross) power source.

So the plug-in Mégane can travel a WLTP-certified 30 miles on nothing but electricity alone; manages a claimed economy figure of 217.9mpg; and thanks to a lab-tested CO2 emissions rating of 30g/km, falls into the 10% benefit-in-kind tax bracket. Company car owners will no doubt find that last part appealing. 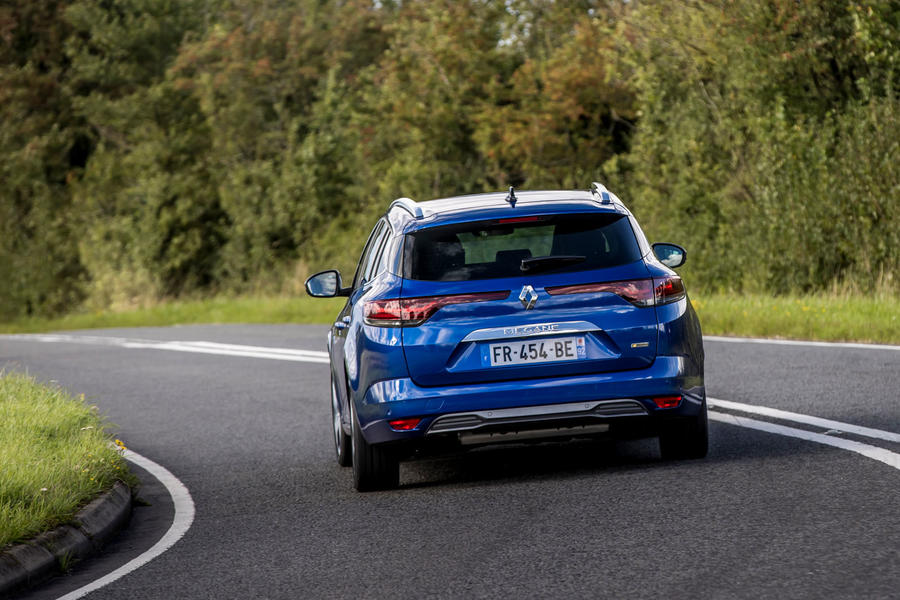 Admittedly, a Kia Ceed Sportswagon PHEV will travel slightly further on a single charge (it has a WLTP-certified range of 35 miles), but the difference between it and the Renault isn’t so great as to be a deal-breaker. In fact, when it comes to the business of, you know, actually driving, it’s the Renault that comes across as the more polished product.

Let’s start with the powertrain. In terms of outright refinement, it does rather put the Kia to shame. Use the entirety of the throttle pedal’s travel and the Mégane’s four-cylinder engine remains impressively demure, with only the faintest drone beginning to make its way into the cabin as you approach the national speed limit. By contrast, the Kia’s motor sounds a bit like an unruly blender. The point at which the Renault’s petrol engine actually sparks into life after a sustained period of electric-only running isn’t all that obvious either, which is a good thing.

What’s not so flash, however, is the manner in which it actually accelerates. It handles the sorts of short bursts you might need to make the most of a gap in traffic just fine, but sustained periods of hard acceleration reveal a few shortcomings.

For starters, there just isn’t that much grunt on offer here, so like the Kia the Mégane manages to feel slower than its 9.8sec 0-62mph time suggests it should. Sure, that won’t be a problem around town, but you’ll notice it if you need to join a motorway or fast A-road from a short slip-road, or overtake slow-moving traffic.

It doesn’t accelerate in a particularly linear fashion, either. When the initial hit of torque from the electric motor expires, you’re left hanging in a sort of limbo that only recedes when the petrol motor manages to spin up into the meat of its torque range. With a slightly ponderous seven-speed ’box in the mix, this can take longer than you’d ideally expect.

Still, it rides Britain’s rather awful roads really quite nicely. It doesn’t trip or slap its way over ruts and bumps, and it’s pliant and controlled over more roly-poly stretches of road. It doesn’t lean over massively through faster bends, and its front end grip feels well matched to its relatively sedate performance levels. The steering’s weighting can feel a bit contrived if you ramp things up into sport mode, mind, but keep it in its regular setting and it feels more natural. Its responses just off centre aren’t quite as quick as what you’d experience in a smaller Clio either, but it changes direction keenly enough and with plenty of accuracy. It’s a very easy car to spend time in, in other words.

The cabin doesn’t look quite as chic or visually appealing as that of the latest Clio, but it works well from a practical standpoint. There’s loads of space in the second row, and the boot’s 447-litre capacity trumps that of the plug-in Ceed Sportswagon - if only just. The Alcantara and leather-upholstered seats are phenomenally supportive, too, and Renault should be commended for retaining physical controls for its HVAC system rather than hiding them in some infotainment submenu. This rings particularly true when you consider the fact that the software the 9.3in touchscreen runs isn’t quite as responsive or slick as the best in class. 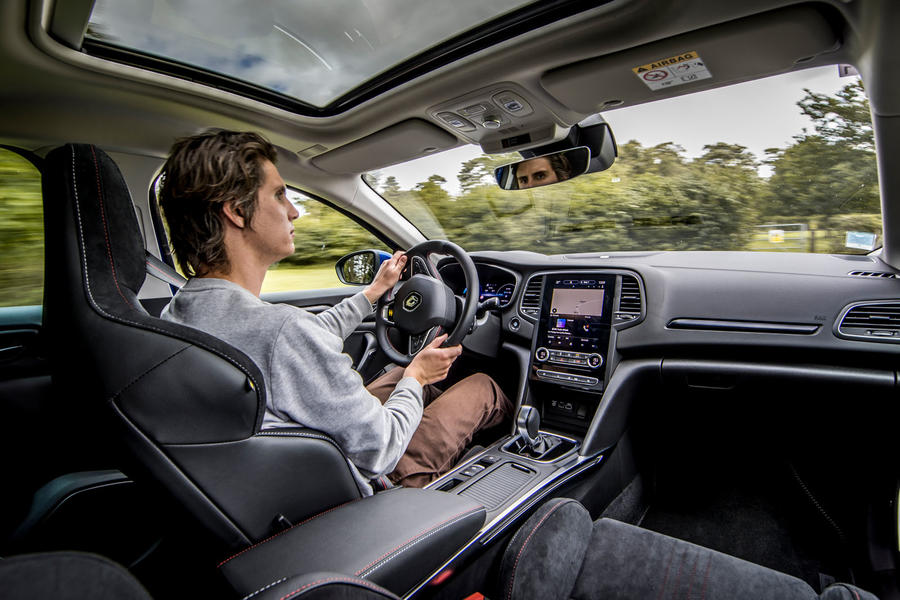 Prices for this new plug-in Mégane Sport Tourer start at £30,685 for the Iconic model, and increase to £32,685 for the RS Line. So it’s slightly more expensive than the Kia, which you can have in range-topping ‘3’ specification for just under £30,000.

The Renault might not be able to travel quite as far as the Kia on battery power, but its overall driving experience generally feels better resolved than that offered by its South Korean rival. For what it’s worth, I think it looks better too.

Of course, to make the most of this new plug-in Mégane you’ll need to keep its batteries topped up. And considering Renault will give you a free BP Chargemaster home wallbox (which can top the Mégane’s batteries up in just over three hours), if you buy one, doing so should be easy. 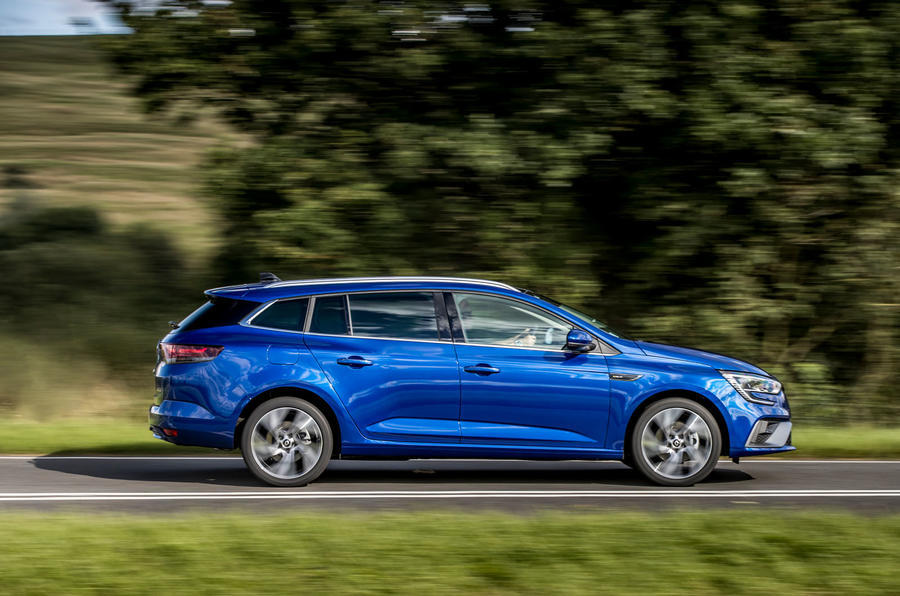 They will probably sell about

They will probably sell about 45 of these then it gets withdrawn. Pity whoever pickes on up after 5 years and hoping that dog clutch and tech doesn't go boom and ruin your marginal running cost savings.

Nope, it doesn't have seven speeds. It has instead Renault's weird but apparently wonderful dog clutch box which has four gears but uses them in all manner of complicated ways to provide two speeds in electric mode and four in petrol mode.

how did this happen

Even by your standards your maths is awful today. To the private buyer a V60 Momentum Auto B3 is 34.4k better engine, better car, way better value for money