9
The Porsche 911 GT2 RS arrives: do 690bhp, rear-wheel drive and a razor-sharp driver focus make the most extreme 991-generation 911 the best in breed?
Open gallery
Close

We can forget about part-electric hypercars for a bit because first the Lamborghini Huracán Performante, and now this Porsche 911 GT2 RS, appear to be quicker. At least they are on that section of one-way public road in Germany, and that is what some people seem to care about.

But the Huracán is also the fastest car we’ve put around our own test track, in glamorous Nuneaton, by quite a sizeable margin. This’ll all change, again, of course, one day. But, for the meantime, lose the batteries and motors; internal combustion and light weight is what you need if you just want to go fast.

How fast is the new 911 GT2 RS, exactly? Officially, 6min 47.3sec around the Nürburgring, where we are not testing it; and nor are we at Mira, Nuneaton. Unofficially, however, it’s “f***ing ridiculous”, according to racing driver Richard Attwood, who turns up, unrelated to what we’re doing, at Porsche’s Silverstone experience centre, our base for this test.

If it wasn’t a chance encounter, you suspect Attwood might have been briefed or ushered aside by a Porsche PR person; he hasn’t tried a GT2 RS, but thinks it’s a pretty stupid idea to send 690bhp through only two driven wheels, through Michelin Pilot Sport Cup 2 rubber, and put it on the road to be driven by anybody at all. And he knows a thing or two about ridiculous cars, having won Le Mans in 1970 in a Porsche 917, which probably counts as one.

The counter-argument, though, is that the GT2 RS is supposed to be a bit ridiculous. There are other cars in the Porsche 911 line-up that are not. Porsche There’s the Turbo, which puts this kind of power through all four wheels and offers the type of driving experience that AMG goes for – relaxed, shovesome, relatively low-effort.

Then there are GT models – the GT3 and upcoming GT3 RS – that are emulated by nobody particularly but are closest in ethos to Ferrari’s Speciale or Scuderia models: razor sharp, unfailingly rewarding, track-focused and all kinds of wonderful.

The GT2 RS doesn’t just seem to want elements of both of these; it apparently wants to eclipse both. There is more power and yet more focus. Not so much best of both worlds but destroyer of both worlds. An automotive Death Star.

Power first, then. GT2 RS means 690bhp (a round metric 700hp at a round 7000rpm) from a 3.8-litre turbocharged flat-six, and it will drive exclusively through a seven-speed PDK twin-clutch gearbox to only the rear wheels.

That’s a fairly whopping 118bhp increase over even the Turbo S, via a pair of new, larger turbochargers, a titanium exhaust and a charge-air water cooler, which has a little refillable tank in the boot (at the front) for its water sprays. Porsche says the PDK gearbox has been customised, too, which presumably has something to do with the arrival of 553lb ft of torque. You’d think 182bhp per litre would be one of the laggiest, boostiest things around, but peak torque is made from 2250rpm and stays to 4000rpm, which doesn’t sound that unsensible. We’ll see.

On to the chassis. Blimey. Quite a lot of work has gone on here. There are helper springs on the front (where, as ever, there are MacPherson struts) that allows lighter main springs to be used on the front axle. A similar arrangement was made for the rear on the last GT3 RS – and is again here on the rear, where there is a multi-link set-up.

And there’s more: ride height, camber, toe angle and roll bars can all be tweaked a bit for driving on a race track. Every single chassis joint is a rose joint, which is usually superb for precision and feedback but terrible for refinement. Again, we’ll see.

Alloys of a rather splendid design occupy every last millimetre of the wheel arches. The wheels are shod with tyres that are also quite large; 265/30 ZR20 would seem like quite reasonable rear wheels for a sports car with lots of performance. Here, those are the fronts; the rears are 325/30 ZR21s. Carbon ceramic brake discs are standard.

The body hasn’t been left alone, either. There is a magnesium roof and a carbonfibre bonnet, wings, bits of the rear end, parts inside, and any body addenda. Specify the optional Weissach package – and you will – and another 30kg will be shaved off the kerbweight. The roof becomes carbonfibre, too; as do both front and rear anti-roll bars, as well as coupling rods – apparently saving 5.3kg. There are also magnesium wheels that, between them, save 11.5kg over the regular versions. The Weissach kit costs £21,042 on top of the GT2 RS’s £207,506 list price. But I think you’ll get more than your £21,042 back come resale time if you fit it. 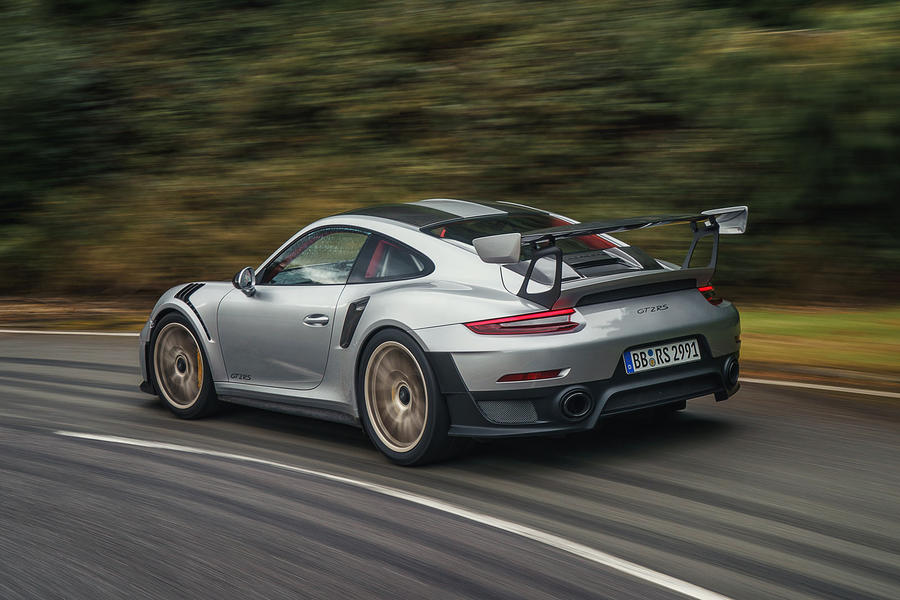 All of those changes, you might think, would point to the GT2 RS being one of the most – let’s admit it – ridiculous road cars you can imagine: hard, unrefined, boosty. People have given GT2 RSs unkind nicknames in the past on account of how wayward they were and Porsche factory race driver Nick Tandy admitted he was quite surprised at this year’s Goodwood Festival of Speed, when he launched the car, hooked second gear and it lost traction again. That sort of behaviour is unusual in a rear-engined car on 325-section tyres.

And, on first acquaintance, no question the GT2 RS is loud. Whatever they haven’t put into that exhaust makes it boomy and whatever they’ve removed from the cabin – there are carbonfibre-backed seats, a titanium roll-cage – means the kerbweight is just 1470kg; only 40kg more than a GT3, which has a naturally aspirated race engine.

If you have a passenger, make it one you know so well you don’t need to talk to or one you dislike enough that you don’t want to – because, at 70mph, you have to shout over the din.

But when it comes to a lack of refinement, that’s as bad as it gets. Porsche and Ferrari both have a knack of doing this recently: taking their most focused road cars and giving them perfectly acceptable levels of ride comfort.

I don’t think the GT2 RS is quite as supple as the 458 Speciale, or even a current 911 GT3, but given the size and profile of its tyres and how stiff it is, it’s better than it has any right to be. (We’re talking relative terms here, by the way; none is nudging a Mercedes-Benz S-Class for isolation. But what it does mean is that conventional English back roads don’t kick the GT2 RS out of kilter.)

Despite the ball-jointing, the steering is neither fierce nor full of disruption. It’s just relatively lightly weighted, brilliantly communicative and fabulously responsive. All of a sudden, the battle for the accolade of ‘best power assistance on the planet’ has a new contender in its midst.

And the power fits into all of this where, exactly? Remarkably, wherever you want it to. There’s some turbo lag – it would be impossible for there not to be – but this engine is phenomenal, with a level of responsiveness and linearity that not many years ago would have been unthinkable on this kind of turbocharged output.

Here, you ask for a certain amount of poke and, after a (very) short amount of time, you get it: no more, no less, at any revs, right through to the 7200rpm limit.

And if you ask for it all? Goodness me. The official numbers clock this car at 2.8sec to 62mph and at 211mph flat out. It feels every bit as responsive and urgent, to me, as a hypercar. Our test route took us from Silverstone to Millbrook and back again, where it finished with some laps of the National Circuit. The 911 GT2 RS’s level of control on back roads is terrific. The ferociousness of the performance on Millbrook’s high-speed bowl never gets boring. And the poise, agility and approachability on a big, flat race track is overwhelming. 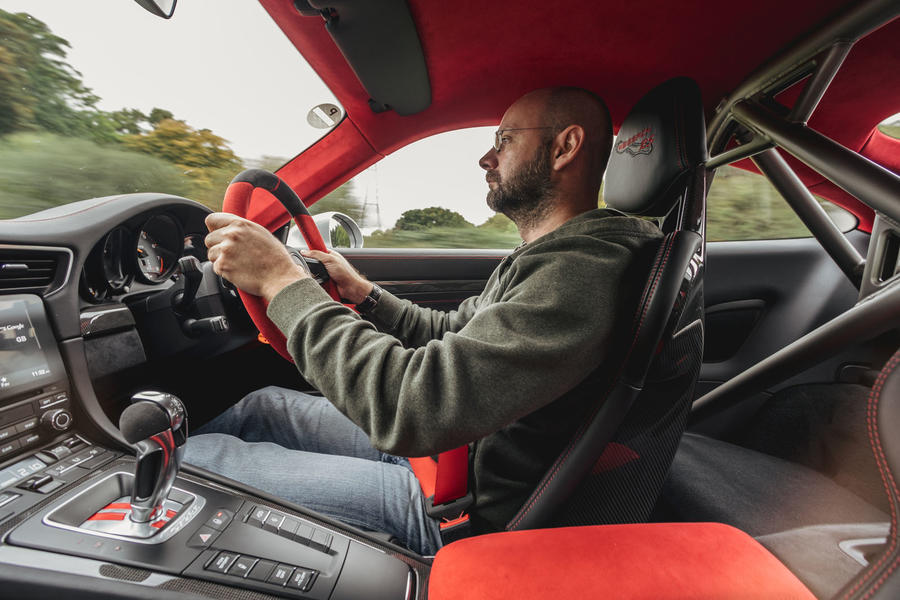 Here’s the thing: the GT2 RS’s ridiculousness is kept largely checked, unleashed only when you want it to. And even when you do give this car everything, it isn’t wayward, it isn’t outrageous, it isn’t dangerous. I don’t think Porsche knows how to do anything other than ‘honed’ these days, even in a car with a larger-than-life character and with such absurdities of performance.

Is it ‘the one’? I’m not sure. I think you get smidgen more responsiveness again out of the lighter, revvier GT3 on track. And you’d get a suppleness and sufficient involvement from a GT3, or even a GTS, on the road that makes the GT2 RS a car for certain conditions.

It is not, to my mind, the Porsche 911 defined as the perfect sports car. It’s a car for ridiculous circumstances. And, in those, there’s still nothing else quite like it. 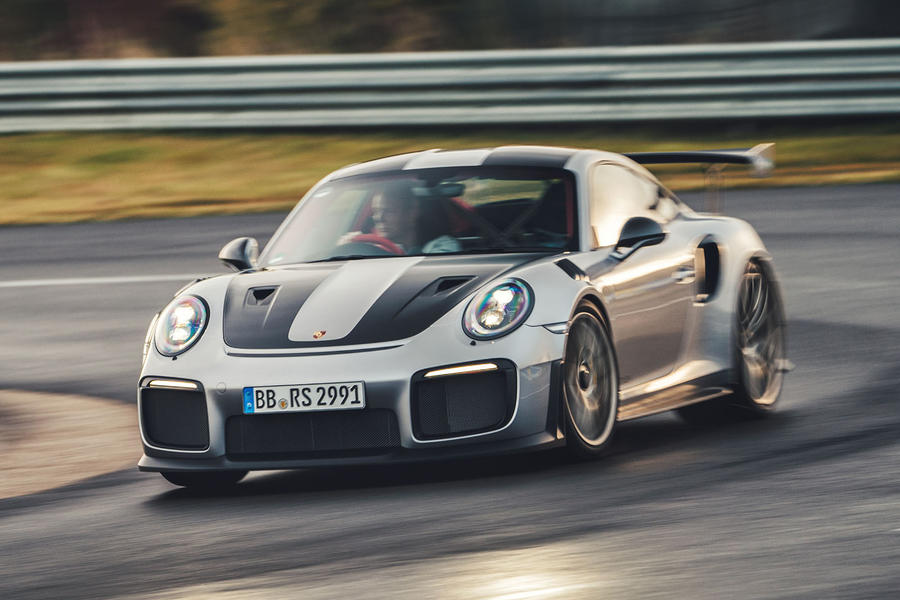 Agree with Les, though the

Agree with Les, though the red headliner is a bit Victoria's Secret.