From £26,8898
Like the rest of the range, the Peugeot 308 GTi gets a mild makeover and improved infotainment, but the oily bits are unchanged
Open gallery
Close

The Peugeot 308 GTi has got to that time in its life where a trip to the cosmetic surgeon is in order. There’s a new bonnet, grille and lights outside, while inside there’s a crisper display for the infotainment system.

Unlike the regular 308, there are no mechanical changes or new engines. That means you get the same turbocharged 1.6-litre motor with 266bhp that originally came from the RCZ R. It drives through a six-speed manual gearbox to a Torsen limited-slip differential that sits between the front wheels. 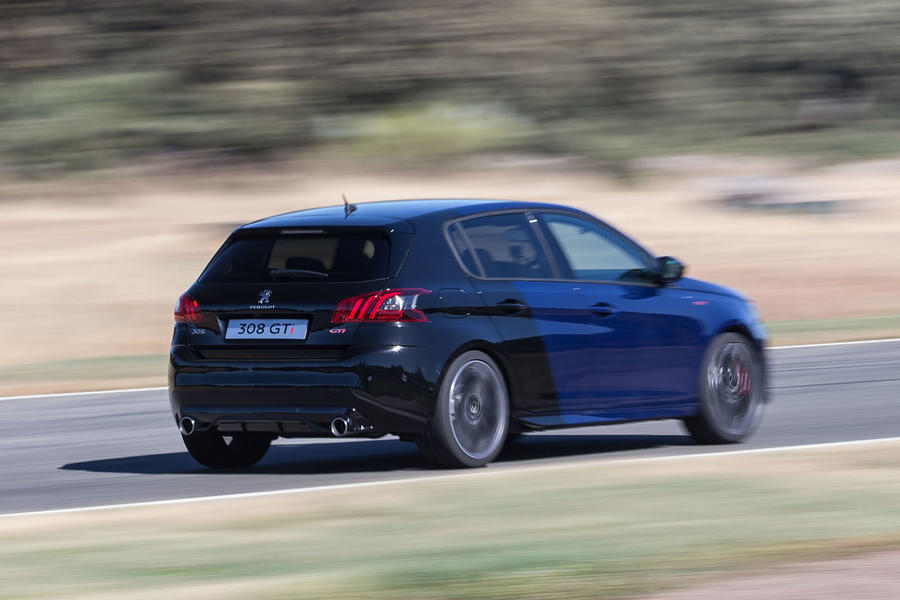 You wouldn’t expect a few nips and tucks to make any difference to the way the car drives, and they don't. Although we were unable to drive the 308 GTi on the road, it felt identical to the version we ran as a long-termer.

Although it's 400cc down on the majority of mid-sized hot hatches, the 308 GTi’s engine feels strong and has a pleasingly linear power delivery. It won’t rev like the Honda Civic Type R’s 2.0-litre turbo unit, and the augmentation of the sound isn’t particularly convincing, but it’s certainly an effective engine.

Grip levels are high, thanks to those Pilot Super Sports, but they do highlight a chassis that’s a bit too soft for really hard track work. You certainly feel the diff pulling the nose of the car towards the apex under power, but it too could be harder in operation. The balance of the car is predominantly nose-led, but a lift will tuck the front in. Really bung it into a corner and you’ll find the tail edges around but is easily caught once you’re back on the power.

If only Peugeot had taken the opportunity to retune the two things that really let the GTi down: the steering and gearbox. Due to the high-mounted instrument cluster (i-Cockpit in Peugeot speak), the wheel is tiny and connected to a very quick rack. While it means little wheel twirling is needed, the steering can feel hyperactive at times and transmits precious little feedback from the front tyres.

As for the gearbox, the ratios are well chosen, but the shift quality is vague and not at all satisfying. To be honest, though, the track is not the best place for the 308 GTi. No, it’s much better thought of as a rapid but relatively sensible hatchback in the mould of the Volkswagen Golf GTI. Here you can appreciate the reasonable fuel economy, a ride that is more comfortable than more hardcore rivals and agreeable CO2 emissions. 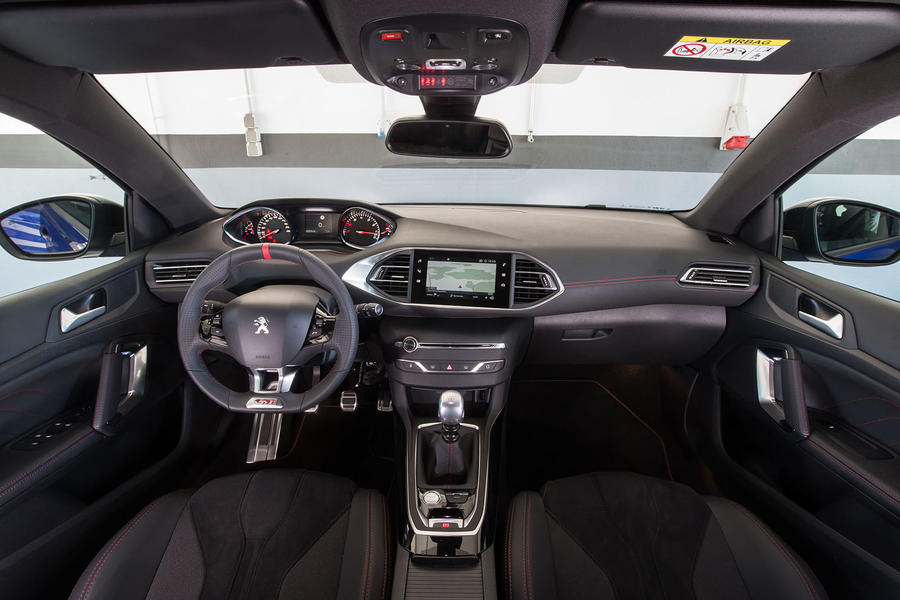 We’ve already touched on the interior, where you’ll find that i-Cockpit either works for you or doesn’t. Some might find the wheel obstructing the instruments when it's set to your preferred position, but the layout will be fine for others.

As for interior quality, there’s a good spread of soft-touch plastics, and the nappa leather on the steering wheel and door pulls looks and feels classy. There are enough GTi-specific touches to distinguish it from regular 308s, including supportive sports seats, red highlights and a few GTi logos.

As for the new infotainment system, it does look marginally crisper but still frustrates in other ways. Some of the icons are a bit small, but the main issue is that the screen controls almost everything. That means delving into the menus to adjust the air conditioning, for example; sometimes buttons are just better.

At £29,405, the 308 GTi isn’t the cheapest of hot hatches, but it makes up for the price with plenty of power, lots of equipment and cheap running costs. As a left-field alternative to a Golf GTI or Seat Leon Cupra 300, it certainly has its merits. Even so, there are plenty of more entertaining rivals for the keen driver.

But did they run out of paint?

Now, it took long enough for the writer to come to the conclusion that most people buy a 'hot' Peugeot/VW/Seat to use on roads! Very few will take their 'hot-hatch' to a track day, fewer still will thrash it to an inch of its Michelin Super-Pilots...
Tell us what to expect when overtaking or when driving on 'B roads', tell us how it reacts in rainy weather, tell us what we need to know and save the 'track chassis settings' for those few who are interested in READING about such things (again, very few people will take their 30K shiny car on a track!).
A GTI can be a valid proposition for people wanting fun: keep them informed, please?
Guy08 7 July 2017

Seriously? I really wish motoring journalists would find another agenda. This is the 21st Century after all where most car use is driving through heavy (and heavily policed) traffic trying to find a bit of open road.
View all comments (6)