It’s the latest iteration of the Noble M600, the Speedster. At least, a pre-production variant of it, also equipped with an automatic gearbox.

You don’t see too many Nobles around. Should we call how few M600s leave Noble’s Leicester factory 'a problem'? You might. Noble’s managing director, Peter Boutwood, is a man who always seems content, and break-even numbers are said to be as low as 10 cars a year. But I get the impression that Noble is still suffering the hangover from people knowing about Noble cars of old: ones that were as fast as Porsches of the day, but cost around half the price.

That’s a tough market for the M600, which is now half a decade old, especially given that when it was launched, there was no such thing as a McLaren 650S and even the Speciale version of the Ferrari 458 Italia had fewer than 600bhp. Now the Ferrari 488 GTB, at 661bhp, has 11bhp more than the Noble. 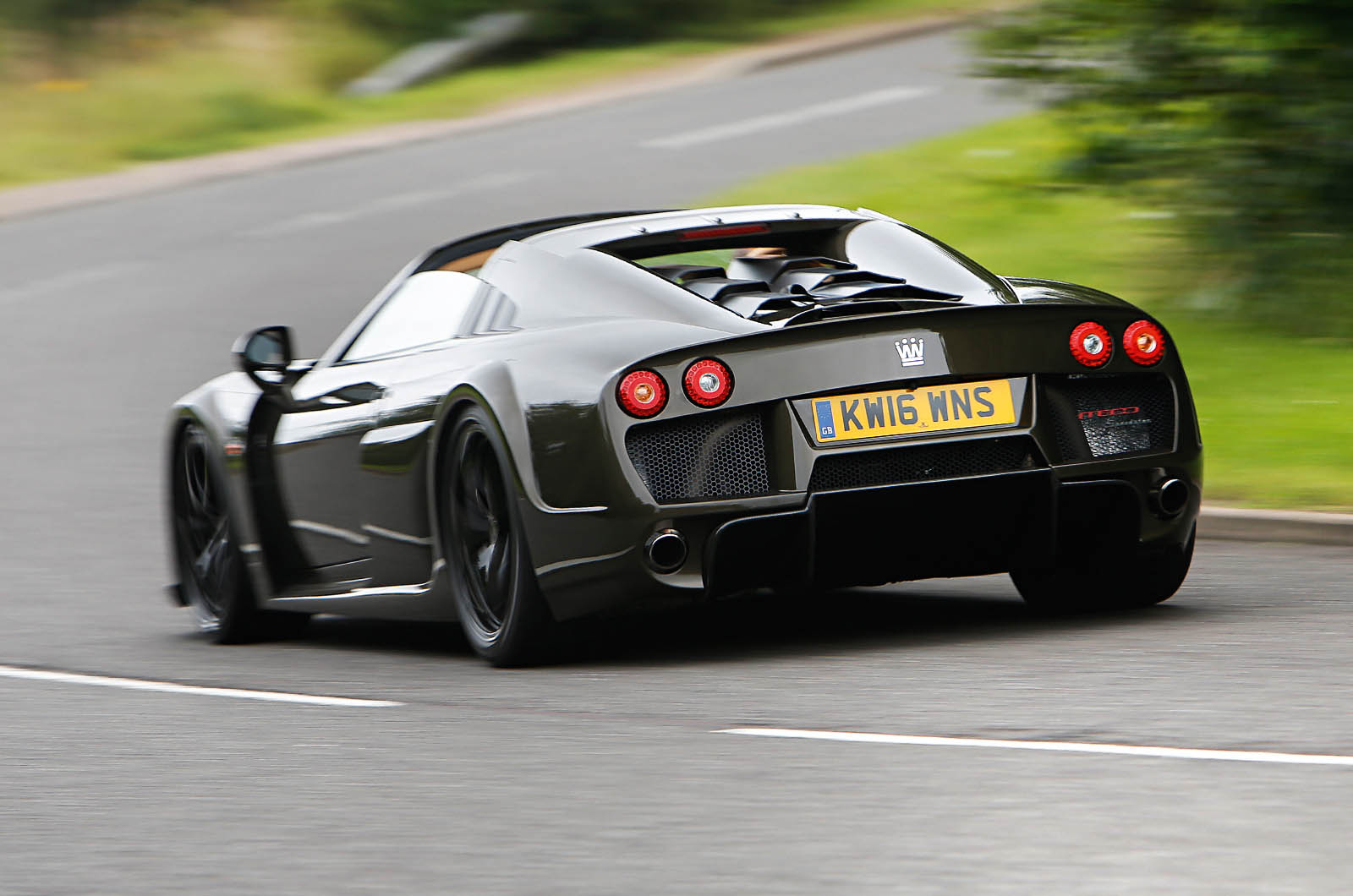 “How good would it be if it said Lola on the nose?” Boutwood wonders, about the lingering effects of the Noble name – founder and designer of those first Nobles, Lee Noble, ceased to be involved years ago – and he might be right because there’s still so much to like about the M600.

It doesn’t weigh a great deal, for a start: it has a fairly straightforward chassis by today’s standards, with a stainless steel sheet tub augmented by a tubular spaceframe, but clothed in carbonfibre bodywork it weighs less than 1200kg.

It has a 4.4-litre Yamaha/Volvo engine in the middle. The name on the engine’s box varies depending on how old the engine is, and Noble has a decent stock, but it doesn’t really matter because as soon as the engine’s needed, it heads off to Judd to get the makeover that gives it up to 650bhp at 6800rpm and 604lb ft at 3800rpm.

When it comes back it drives the rear wheels through a six-speed manual gearbox or, optionally, through the same ‘box but with hydraulically actuated, clutchless shifts: it’s a single clutch unit like Aston Martin’s most recent offerings, or the Lamborghini Aventador, not a dual-clutch auto. And Noble is still working on the calibration.

It’s still working on the interior finish for the removable targa panel in the roof, too. The roof panel? Well, it doesn’t weigh much, and it doesn’t take long to put it in. It slots at the front and clips at the back and our acquaintance – in some relatively heavy rain – suggests it doesn’t leak. But it’s not finished inside yet, you can’t carry it in the car and it’s a manual on-off job. But for the typical Noble buyer, maybe that doesn’t matter.

I know it’s a cliché to say that interior quality has come a long way on small volume cars. There’s usually a very long way to come from, but between the last time I drove an M600 and today things have been improved inordinately. The fit and finish on the Speedster, the stitching on the leather, the carbonfibre work is all really first class. You could sit this M600 alongside any other supercar and, non-bespoke column stalks aside, its interior wouldn’t look out of place. It looks hand-finished in the most pleasing sense.

Noble has recently appointed a dealer, Super Veloce Racing, of Buckinghamshire. “The M600 is one of the most usable supercars,” says Super Veloce’s sales and events director Lee Cunningham. “Hmm,” I think, because this is a bloke who has won a few Lamborghini races in his time, is the current Ariel Atom Cup champion, so his idea of usable probably differs from mine – given the M600 has no ABS and no stability control.

But brief reacquaintance with an M600 coupé first, and then the Speedster, shows me he’s right. The M600 has a high nose, so it gives no bother to its carbonfibre bodywork over speed bumps, even though that might mean it looks less fast while it’s standing still. Visibility is good, control weights are ideal and it rides extraordinarily well. When it was launched we were convinced the M600 out-rode, out-steered and out-handled the Ferrari 458 Italia. I think it still outrides and outsteers a 488 GTB today. 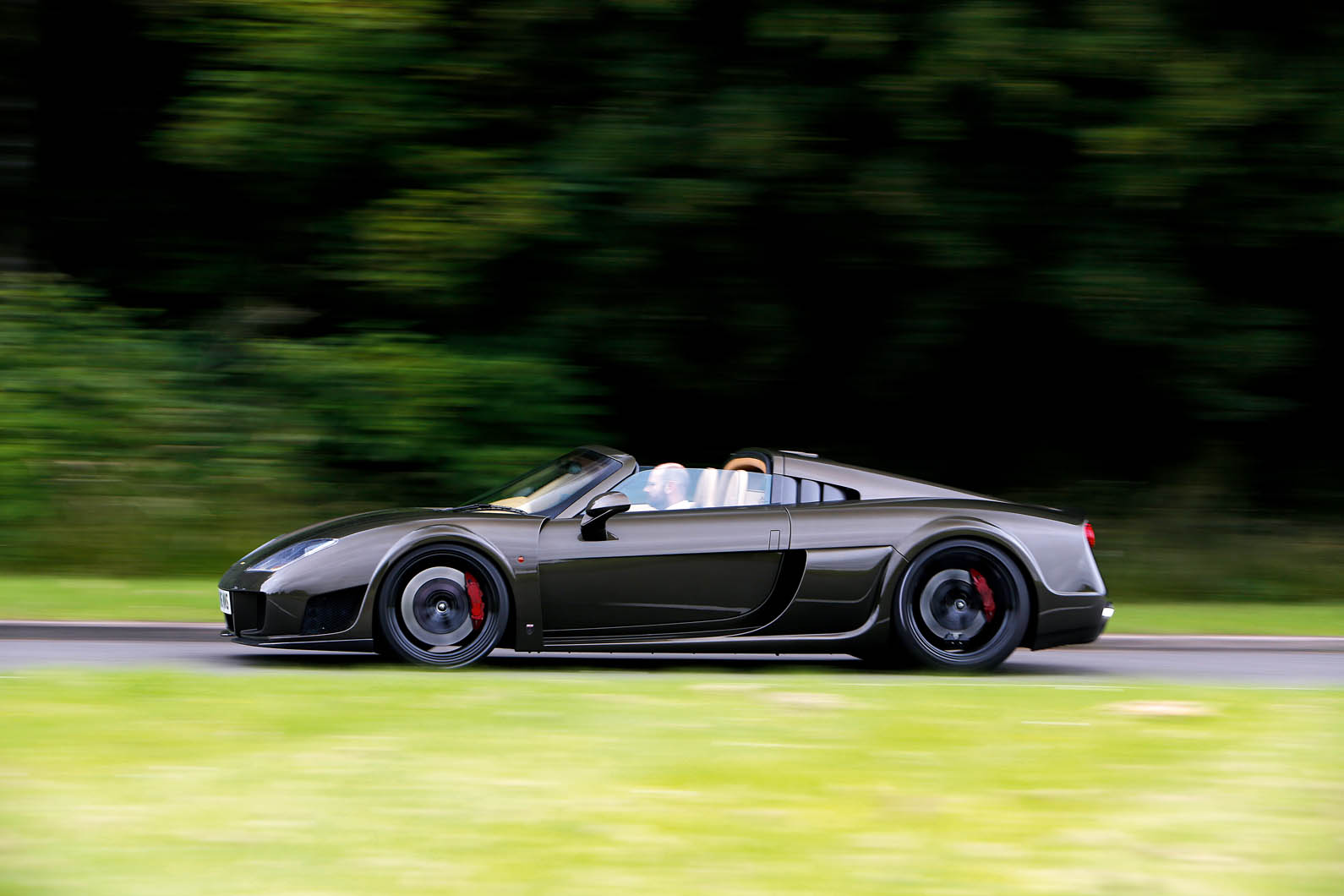 If there’s a loss in rigidity between the coupé and the Speedster, I barely felt it.  Lopping off the roof hasn’t affected the torsional stiffness too much, according to Boutwood. A crash-test car is in build, which will show how well it stands up to being banged.

A road drive suggests there’s no shimmy in the mirrors, so it still feels pretty rigid to me. And the Speedster does what the coupé does, too. It rides and steers in a manner far better than you’d expect; and because it’s so light, it’s hugely agile.

The engine is still immense. Always was. There’s a little lag at lower revs, inevitably, but it makes a terrifically honest noise and has a great, honest response. The gearbox needs more work yet. If you’re going flat out – or even moderately quickly, because let’s face it, 650bhp in an 1198kg car doesn’t give many flat-out opportunities on the road – it’s fine. Good, even. Shifts are quick, if abrupt. But it still needs calibration at lower revs, and Noble knows it, and the car is going to getting it.

I can understand why, absolutely. Alongside the Speedster I had a go in Noble’s orange M600 coupé demonstrator and despite it having the other side of 40,000 miles on the clock, it still felt just as good as when we first tried the M600 at the turn of the decade. Time hasn’t dulled just how well it rides, just how outstandingly smoothly and accurately it steers, nor how well it handles – as close to ideal as I think I remember from a mid-engined supercar.

So if you’re tempted, and you can overlook the not inconsiderable appeal of a Lamborghini, Ferrari, or McLaren – or perhaps you’ve got some of those too – I think you’ll find something in the M600 that’s worth seeking out. I’d still have a manual, myself, because I think it suits a car as immersive as the M600, and I’d have a coupé, too, because of the purity of a fixed roof. But I can see that both options will give Noble access to markets where it hasn’t been able to get a toehold. And it deserves a wider audience.

I agree with a few of the earlier comments, the pricing is all wrong!

It just doesn't seem like a £300,000 car. Don't get me wrong, I don't think they'll have any problem shifting the stock but I can imagine it'd mainly be because the buyer couldn't get on the Ferrari or McLaren waiting list. Remember the Gumpert Apollo? sensational car with questionable looks priced close to that bracket but no one ever spoke out about owning one. They all preferred the Carrera GT or McLaren SLR.

The biggest problem is the fact that you could buy and Aventador for less!! Who could imagine a world where the Lamborghini Aventador would be the choice for the financially savvy lol

So, looking at the vent

So, looking at the vent behind the front wheels, I'm wondering if Peter Wheeler's mutt has been seen lurking around Noble's body workshop?
jason_recliner 2 August 2016

At risk of falling behind...