From £28,4958
New Leaf has plenty of substance to go with its striking looks, but there is still work to do if Nissan wants to take class honours in the UK
Open gallery
Close

The Nissan Leaf is a world leader in terms of electric vehicle sales. A global total of 280,000 of Nissan's 'Leading Electric Affordable Family' cars have amassed 3.5 billion miles of mileage between them since the model first went on sale in 2011.

You’ve probably seen the new second-generation Leaf; it’s got the sharp looks of the IDS concept seen at the 2015 Tokyo motor show, a range of 235 miles, and technology upgrades which include the ability to drive semi-autonomously in a single motorway lane (although this feature is dependant on which specification you choose).

What we have here - here being on a drive event ahead of the Tokyo motor show, on a strip of public road near Nissan’s global headquarters in Yokohama - is the Japanese-spec Leaf Mk2, now in production form, following on from our test of a prototype in September. 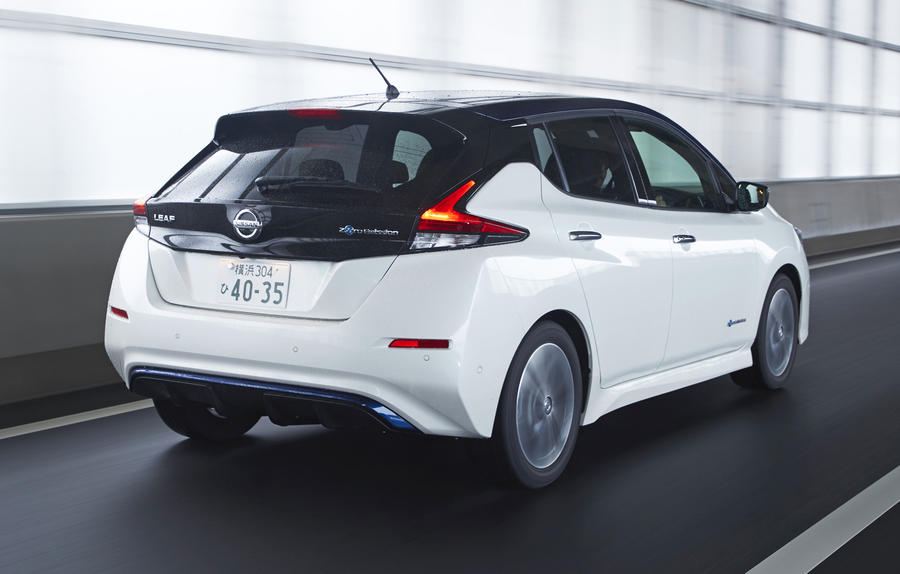 Our test car is different to what we’ll get in the UK. The suspension will be stiffer on the UK car, the e-Pedal smart regenerative braking system gentler, the dashboard more Nissan Micra-like, and it won’t get a rear-view camera and display in the rearview mirror.

The UK-specification car will benefit from that upgraded dashboard from the Micra because the interior of the Leaf isn’t exactly inspiring in Japanese spec. There’s a lot of grey plastic.

The e-Pedal in the Japanese-spec car is a little aggressive and Nissan expects UK customers to prefer a gentler deceleration when easing off the throttle. Nissan couldn’t say by how much it’ll be reined in, but there’ll be less head-bobbing from passengers when the driver’s foot comes off the accelerator. When you're on the accelerator, this new Leaf has got a real lump of torque to fire it down the road – 20% more than before, in fact, at 236lb ft. 148bhp of power gives a rather pedestrian top speed of 89mph, but that's of little concern to the average Leaf driver.

Stiffer suspension might not be such a welcome tweak for the UK, though. The Leaf is slightly firm already. Bumpier surfaces make themselves known at low speeds, with a little more shake than you’d hope. Nissan promises that cornering ability will be improved, although there’s nothing noticeably wrong with that. From first impressions at least, it doesn’t need it.

Although the new car is slightly squatter than the first-generation Leaf, headroom inside is excellent – unexpectedly so for the rakish-looking hatch – although its exterior dimensions make it almost as wide as the Ford Focus, and larger than one in every other direction.

A seating position that’s slightly too high compared with the shallow windscreen makes the interior feel a little less spacious than it deserves, though. Otherwise, the dashboard has the perfect button-to-screen ratio. Important functions aren’t relegated to a sub-menu in the infotainment, but the dash is nevertheless satisfyingly uncluttered.

The blue button on the right-hand side of the steering wheel unlocks a key feature of the new Leaf; Propilot is the name given to Nissan’s semi-autonomous driving system. It’s as easy to operate as adaptive cruise control: just set the speed, wait for the system to confirm that it’s ready, and relax. Let go of the wheel, though, and a reminder tells you politely to keep your hands on it.

The reminder is less polite the second time around. Propilot Park - an extension to the Propilot system – makes light work of automated parking, albeit slowly. There’s no setting to make it faster as it rolls into a space, so it’s certainly not suited for city parking, but it’s accurate and intuitive, even allowing for situations where space isn’t marked - you move a box into your desired space. It’d be brilliant if it wasn’t so timid in its speed. Luckily Nissan will be updating that too.

Steering is where this Japanese Leaf loses a sizable chunk of driver appeal. It feels numb, and not all that direct, either. It’s far from where it should be. And guess what? That’s getting updated too; Nissan is tightening up the rack to be more responsive on UK-market vehicles; it’ll take closer to two turns lock-to-lock than the Japanese market’s three. 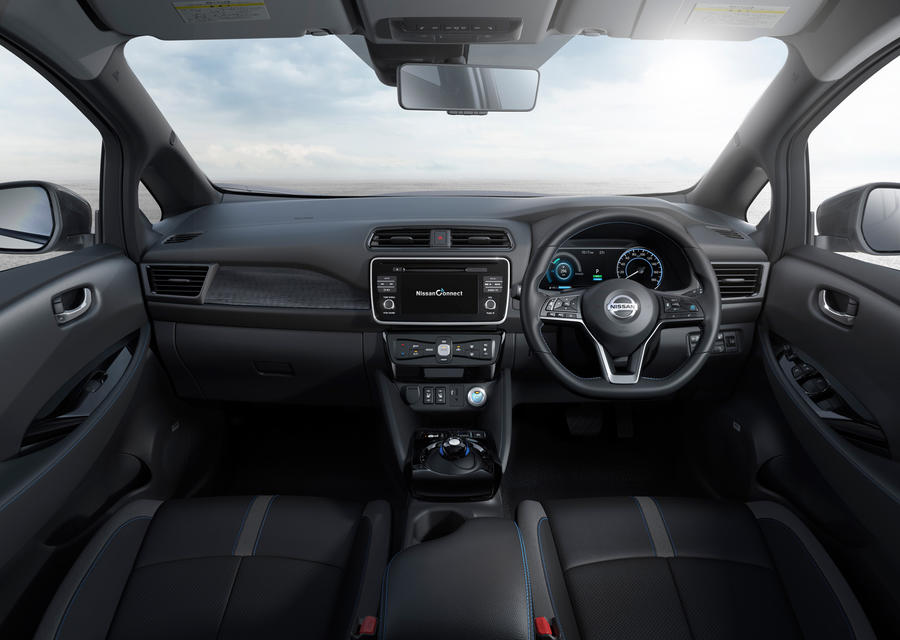 The price structure for the Leaf range will remain similar to the current car; £26,000 for the first UK cars in a special Launch Edition specification.

Currently, the Nissan Leaf is getting long in the tooth, and lags behind some rivals. The new model, which is deliberately more subtly styled, addresses these points comprehensively.

It's driving attributes will also be comprehensively addressed if Nissan carries out all of the changes as promised to the cars heading for the UK. So this is a relatively subdued verdict, pending Nissan’s pledged tweaks. If they’re implemented, the new Leaf will be not just a formidable electric vehicle, but an incredibly decent car full stop.

Chances are that the Leading Electric Affordable Family car will continue to be just that. The competition’s ramping up though, so the Leaf might not be alone at the top of the class for long. 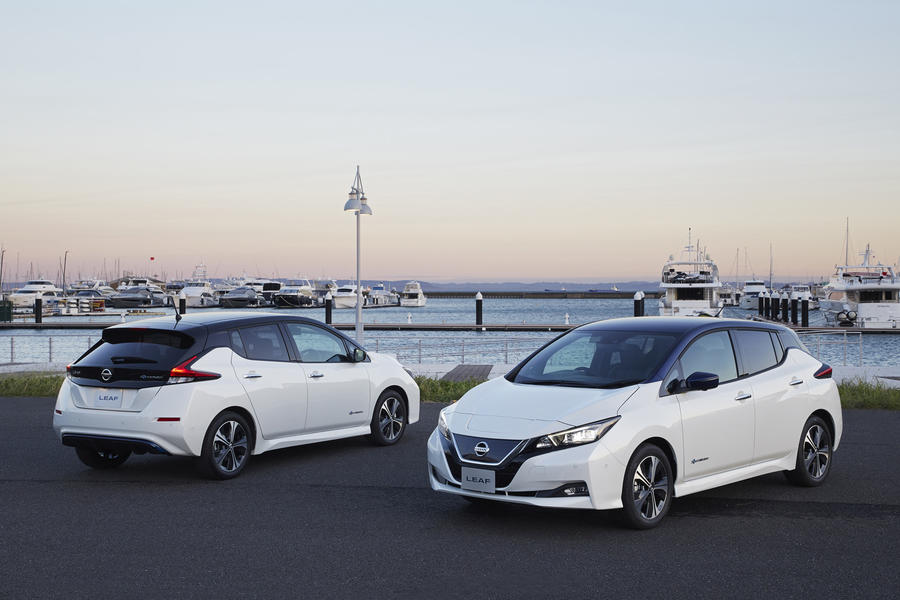 A dumpy, ill-proportioned mess. Look at the i3 from BMW...shouts contemporary...forward thinking.

If they want it to look mainstream...they have done a grand job. Perhaps their logic is that they want the hum drum hatchback buyer not to be affronted by the Leaf and see it as an option to a Hyundai something or a Toyota corolla. People are truly dull so they are probably doing the right thing.

Look at the i3 from BMW...shouts contemporary...forward thinking' It may be contemporary but it's still ugly, even made in the top 5 ugly car listing..

Let’s not beat about the bush.

Only its mother could love it.

It'll need to be very good

I really expected this new Leaf to blow away the competition, such as it is. After all, Nissan has had the benefit of many years experience with the old one. Looks are subjective but to me this looks worse than the old model – dumpy, fussily styled, contrived, badly proportioned. There's not an inch of it I really like. And the interior looks like the Golf did many generations ago. It seems like a big opportunity missed to take things forward. So I'm sad to read that the way it drives is not, apparently, a huge advance either. Considering all the new competitors that are going to be biting at its heels very soon, I wonder if Nissan has done enough to stay ahead with this new car.