The Nissan Navara Trek-1° is the highest-specification version of the strong-selling pick-up truck yet produced.

Named after the geographical location of the Navarre desert, it’s being produced in 1500 examples, of which 400 are destined for sale in the UK.

It’s odd to imagine such a high-spec machine being submitted to a hardworking career, but modern pick-up trucks often live more varied lives than their forebears, acting as workhorses during the week and family cars at the weekend. Rivals such as the Volkswagen Amarok and upcoming Mercedes-Benz X-Class illustrate that there’s good demand for premium pick-ups in Europe, and the Nissan Trek-1° comes in as the most exclusive to fit this bill. 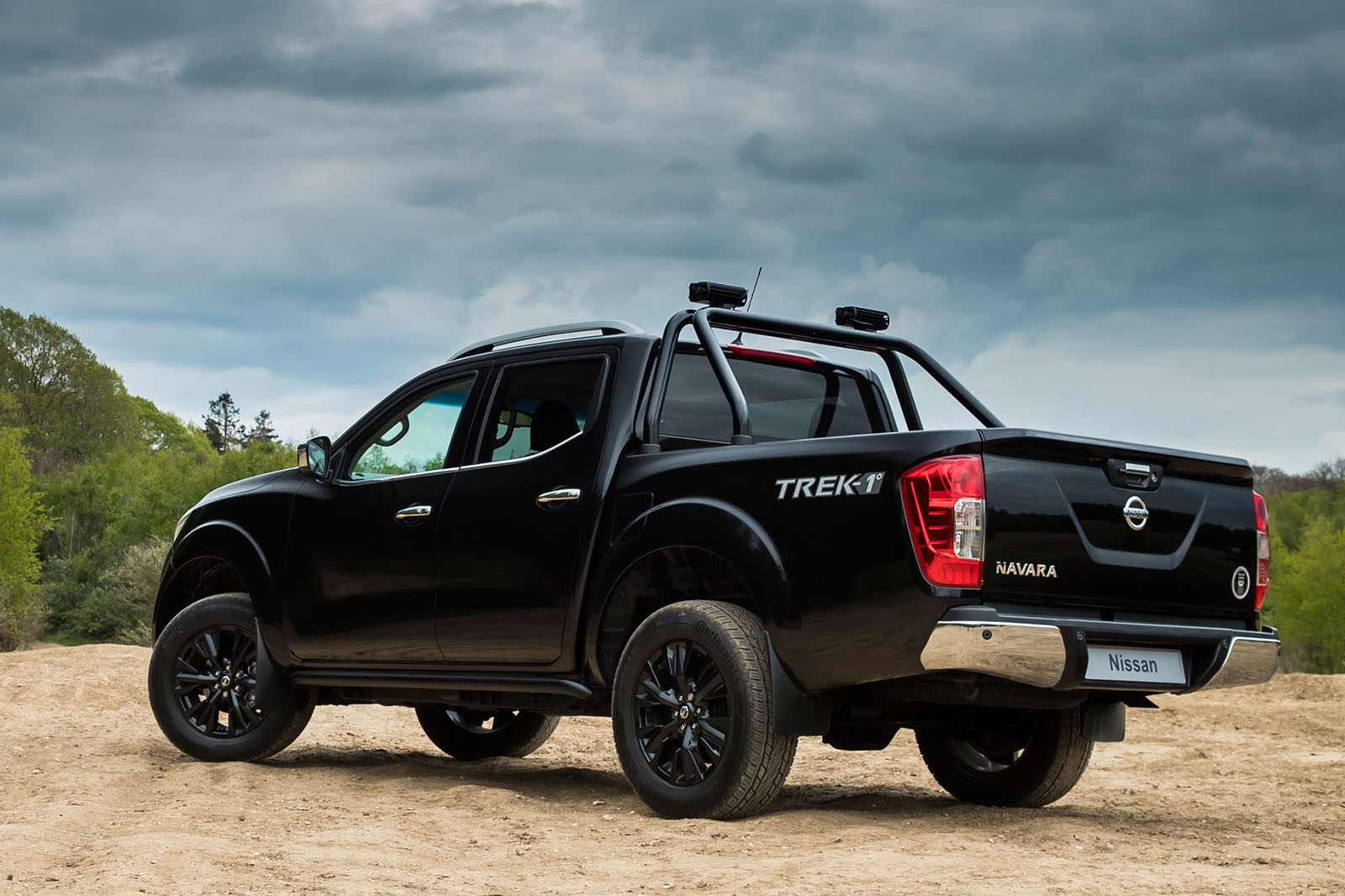 Available only in double cab, five-seater form, the Trek-1° is based on the top-spec Tekna trim level - which accounts for about 80% of Navara sales in the UK - but gets several unique features for a £3435 premium. These include sport styling bars with two forward-facing LED spotlights, black side styling bars and bespoke 18in six-spoke alloys.

The Trek-1° comes in just two colours, Black Metallic or Storm White, the latter of which is exclusive to the model. It also gets Trek-1° decals on both sides of the loadbed. As standard, the loadbed gets a cover, which hinges from the back of the cab and hides the movable dividers and liners that improve storage flexibility beneath.

Power is provided by the same 2.3-litre turbocharged diesel engine as the rest of the Navara range, in 158bhp or 187bhp forms, mated to a six-speed manual or seven-speed automatic gearbox.

Step up into the Navara Trek-1° and you’re greeted by leather seats and a dashboard that looks like it’s been peeled straight out of the Qashqai. A 7.0in touchscreen featuring a DAB radio and sat-nav is the highlight, and makes the Trek-1° feel like a well-specced SUV - a character that remains when you first get moving.

Since there are no mechanical changes to the Trek-1°, our car, equipped with the more powerful 187bhp engine and seven-speed automatic 'box, hides it 1991kg kerbweight with equal aptitude to its siblings. The engine’s healthy 332lb ft, available from 1500rpm, helps the pick-up surge along, with good rolling acceleration and impressive motorway cruising capabilities.

This performance left us convinced that claims for a 3.5-tonne towing ability are justified, although we weren’t able to test it. 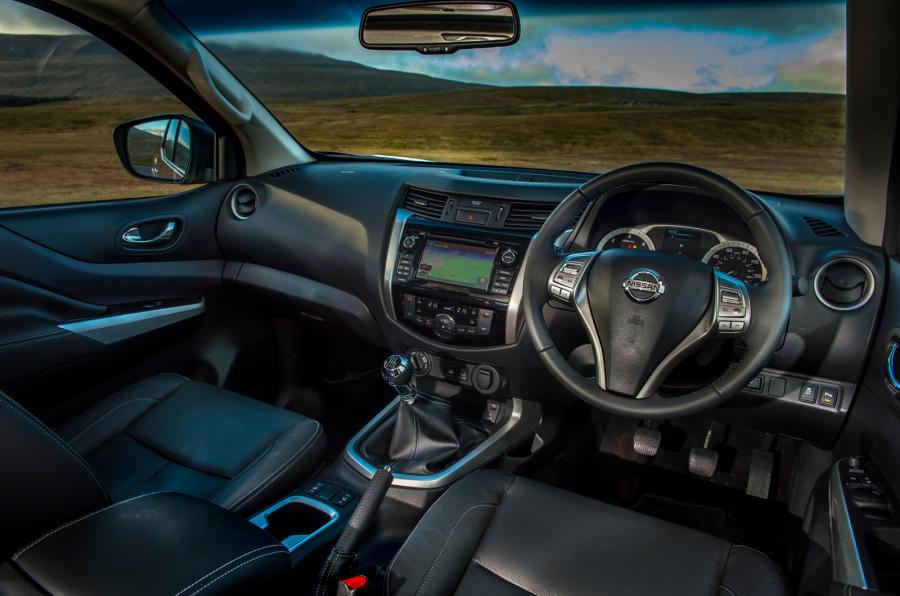 Our car’s automatic gearbox (the picture above shows the manual version) was quick to flick between gears and added to the premium feel of the Trek-1°, but the ‘box does have a tendency to hesitate before kicking down, which slightly hinders your ability to overtake slower traffic on B-roads.

The Trek-1° rides well on its 18in wheels, thanks to the Navara’s use of five-link rear suspension, absorbing speed humps and dips in the road with composure, although smaller road imperfections such as cracks and chipped surfaces, as well as grassy surfaces, can send vibrations shuddering through the car's body. 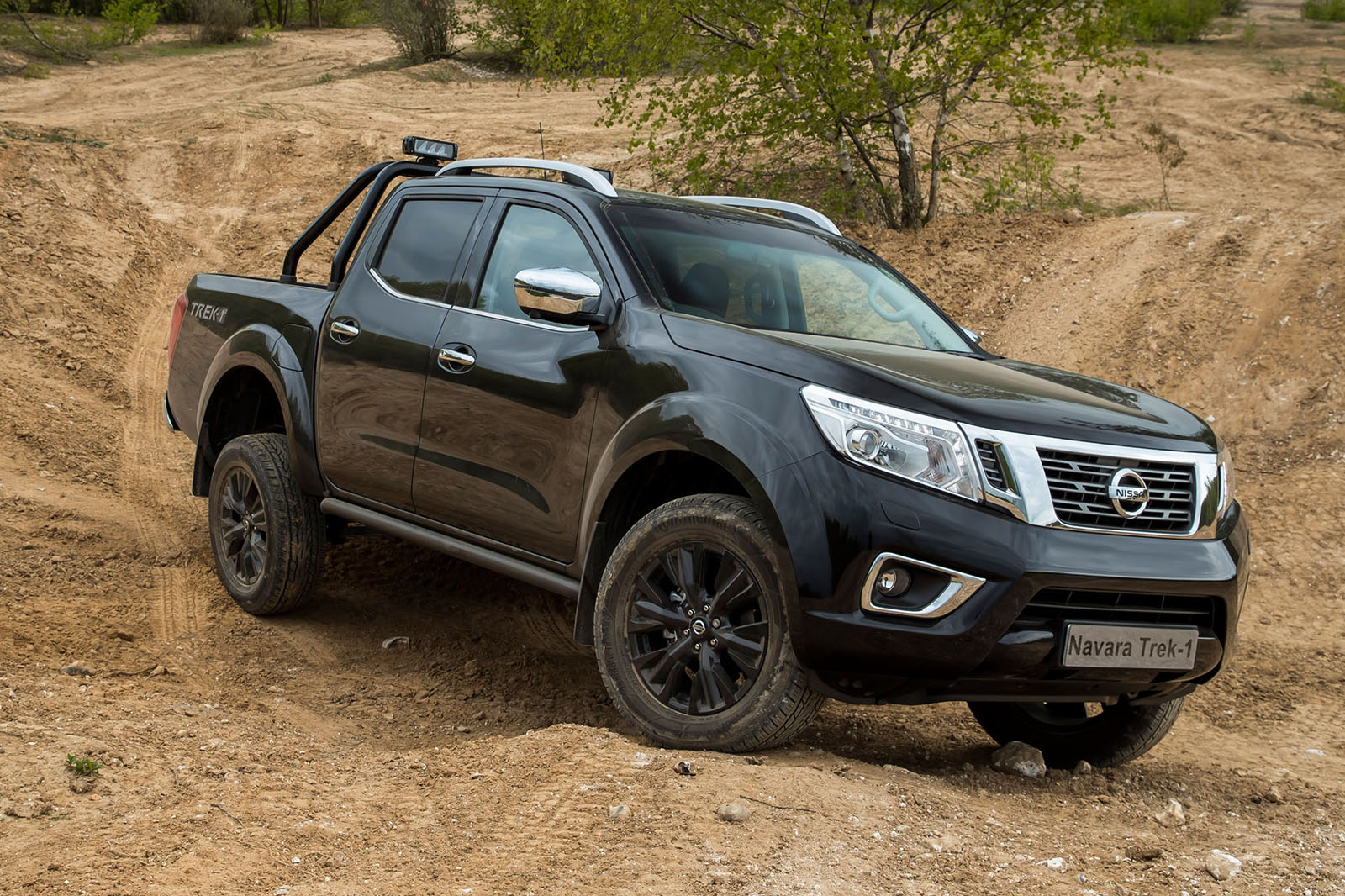 However, the driving experience is still familiar to that of a more conventional SUV – a compliment given how flexible most have become, because the Navara hides its size well (it’s 331mm longer than the Range Rover). Visibility is boosted with the fitment of parking sensors and a 360deg monitor, which switches to show the rear view camera when reverse gear is engaged.

One piece of advice though: avoid multi-storey car parks if you want the Trek-1° to keep hold of its LED spotlights.

It looks like the Navara Trek-1° is Nissan’s strongest asset for battle against the X-Class, because both of these models – which are based on the same underpinnings - stretch into higher, more fashion-conscious ranks in what is a growing segment.

However, for buyers less concerned about exclusivity and a few bespoke exterior features, recommending Navara Trek-1° over a regular Tekna is hard, because the latter does everything just as well for £3435 less. While it might fall short of the Trek-1°'s added coolness, it offers better value for money and undercuts rivals such as the Amarok by a healthy margin.

I wonder if they have fixed the 'manufacturing default' that is effecting all D40 Navaras and lead to mine being scrapped? I would not touch this with a bargepole

I think it would be helpful to include a photo or two of the loadbed, dividers, cover etc, rather than quite so many of the LED spotlights.

rubbish trucks that crack in half

My brother in law has one and loads of problems when in and out of warranty and rusting already and a friends chassis cracked in half now written off. Toyota far better truckwise.
View all comments (5)