Historical highlights of August 1980 included the release of Microsoft’s debut operating system, Xenix, the first-ever full-body MRI scan, at the University of Aberdeen, and the birth of future child star Macaulay Culkin.

In the UK charts, David Bowie’s Ashes to Ashes disproved Abba’s The Winner Takes It All by replacing it at number one. Less remembered by posterity is the quiet death of the Mk2 Ford Escort, the final examples of which rolled off the line at the Halewood plant during that month.

The Duratec engine makes plenty of low-down torque but is happiest being revved, and although it doesn’t have the hard-edged rasp of an original Escort twin-cam, it still sounds impressively muscular
Mike Duff

But as a rally car, the Mk2 would be sorely missed. Ari Vatanen won his sole World Rally Championship driving one the year after the road car retired. (The connection was celebrated by the Flying Finn’s reunion with both the original car and WRC co-driver David Richards at the Goodwood Festival of Speed last weekend.) Yet even as rallying moved into its era of turbocharging and all-wheel drive, the humble Escort’s combination of affordability and tunability kept it popular with amateur competitors.

In the years that followed, this created an ecosystem of specialists and suppliers to keep examples running. And when demand started to trump supply, it led to increasingly outlandish prices being paid for two-door Escorts to be converted into rally cars. Many are still competing, and in recent years, outlandish mechanical makeovers have given some more than 300hp and modern sequential gearboxes.

Now one of the principal suppliers of parts for rally Escorts, Motorsport Tools, has joined the dots and turned fresh components into all-new cars. You’re not looking at a Ford Escort: the Welsh company doesn’t own the rights to either of those badges. But the MST Mk2 is essentially an all-new and road-legal version of the original. Since the first images of this 70-plate demonstrator were released earlier in the year, the company has received enquires from around the world. 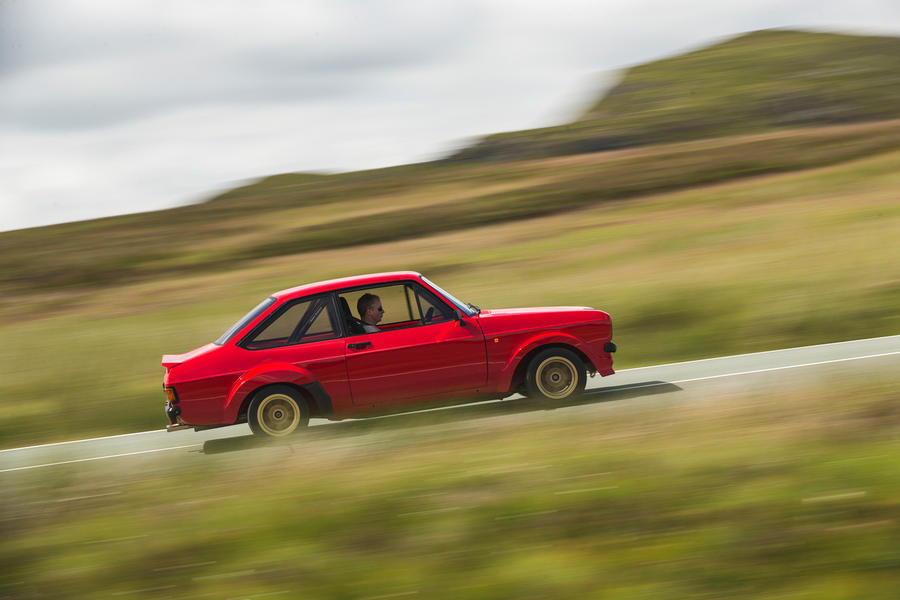 Some potential customers are in search of a top-end rally weapon with all the bells and whistles. But others are keener to order cars built to the less aggressive spec of this prototype, one that could be summed up as competition viable but road usable.

This Mk2 has most of the upgrades that have been given to rallying Escorts over the years: a full roll cage, broadened ‘Group 4’ arches, a beefier Atlas axle held in place by six links, AP competition brakes and gorgeous 13in Minilite wheels shod with Kumho Escsta tyres.

The bigger changes are those that have earned it a freshly issued V5, rather than the adopted legal identity of a rusty, barn-found bodyshell. Power comes from a modern 2.5-litre US-spec Ford Duratec engine with a catalyst and drive is sent through a Mazda MX-5 gearbox. Other updates – including a collapsible steering column, a locking filler cap for the motorsport-spec 55-litre fuel tank and the removal of various acceptable-in-the-’70s sharp edges – have been necessary to pass an Individual Vehicle Approval (IVA) test.

MST boss Carwyn Ellis says the demonstrator is still some way from the standard of finish the company wants to ultimately achieve, but it looks great in the flesh. It uses a few parts sourced from period cars, including door handles and window winders, but customer cars will be all-fresh. Crucially, the structure is entirely new. Ellis says that even the tidiest-looking period Mk2 Escorts are often hiding substantial hidden rot.

Refinement is lacking. The Mk2’s engine bursts into loud life and fills the cabin with vibration. The lack of any carpeting or NVH (noise, vibration, harshness) insulation means lots of noise and – after a few miles of hard use – also noticeable heat soak through the front bulkhead. (Buyers will be able to specify plusher trim if they want it.) The Duratec makes plenty of low-down torque but is happiest being revved, and although it doesn’t have the hard-edged rasp of an original Escort twin-cam, it still sounds impressively muscular when being worked hard.

The new engine breathes through separate throttle bodies and MST reckons it makes around 200hp. As the Mk2 weighs less than a tonne, performance is unsurprisingly brisk, with acceleration staying strong even through third and fourth gears. 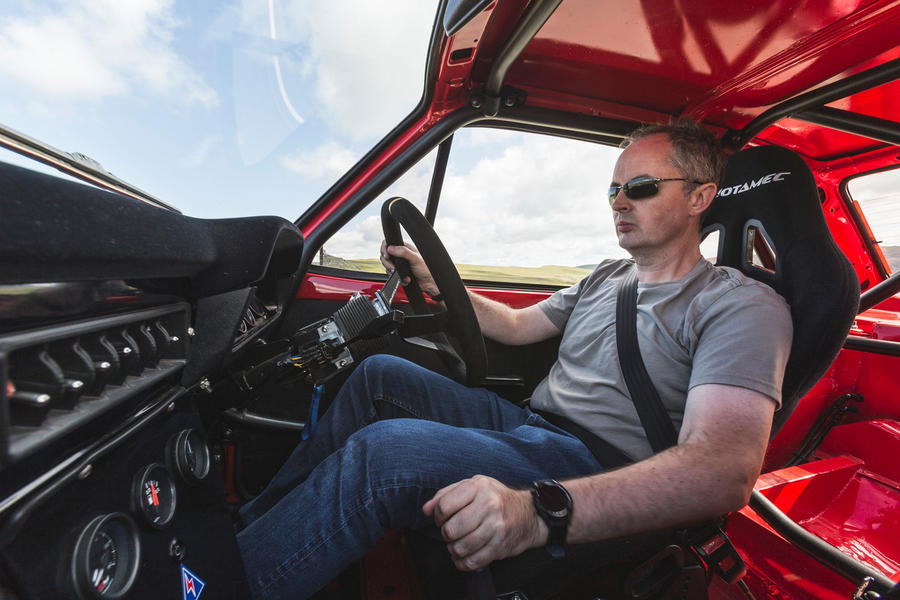 The demonstrator’s hydraulically operated clutch has a heavy pedal, but a quick shift selector allows for ferociously fast changes once the knack is found. And while most rally-spec Escorts are bouncing off their rev limiters in top gear at little over 100mph, MST has kept a road-friendly combination of gearbox ratios and final drive, so sixth pulls just 2500rpm at an indicated 60mph.

Not that longer journeys are really the point of a car like this. The Mk2’s suspension has been built with motorsport-spec poly bushes to ensure stiffness, and a generous amount of toe-out on the front wheels to improve cornering responses causes you to make frequent small directional inputs when cruising at speed. Chassis discipline is excellent with big loadings, but small bumps are both felt and heard. Hitting a catseye creates a gunshot bang in the cabin.

But on the right road – one with frequent corners – these niggles are soon forgotten. The Mk2 is one of those cars that gets better when pushed harder. MST has added electrical assistance to the steering to help with low-speed manoeuvring, but this fades out at speed and leave a rack that is light, accurate and full of feedback. Most of these messages report on the huge mechanical grip being generated by the front tyres, with subsequent encouragement to push harder. There is an almost total lack of understeer.

Behaviour can be turned predictably rear-endy with big power applications in tighter turns, but the Kumhos’ adhesion is so high that it isn’t the sideways monster that old rally videos might lead you to expect. A slidey surface, or one of MST’s most powerful engine options, would doubtless shift the handling balance further from grip towards slip.

The Mk2 demonstrator’s brakes also play to its split personality. Competition-spec Mintex pads provide uncomplaining retardation under hard use, despite the compactness of the discs they clamp inside those small wheels. But they grumble and squeak protest under gentle use. This is a car that positively wants to be driven hard. 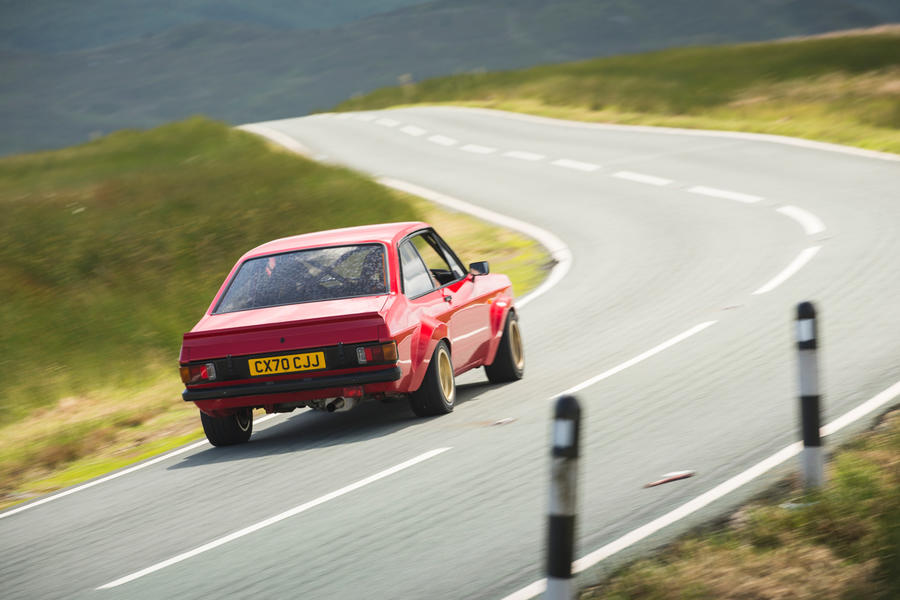 The idea of spending Porsche 911 money on what is effectively an unsanctioned ‘continuation’ Ford Escort might seem daft, but on a smiles-per-pound basis, the MST Mk2 would likely be the better investment.

Creating a car to a similar spec from an original shell would also be a very expensive endeavour, one that would come without the reassurance of an entirely new structure. The demonstrator reflects what Ellis describes as a Stage 2 spec and would cost around £102,000, including VAT, depending on individual options. The less powerful and more road-biased Stage 1 is £90,000 and the angrier Stage 3 is £114,000 – with the possibility to go well beyond that with a 350hp-plus Millington engine or a six-speed sequential gearbox.

MST is also working on a car that will offer a similar continuation for the Mk1 Escort – one that will be eligible for much more historic motorsport. Everything old is new again.