7
A simpler, sweeter-handling and cheaper prospect than its six-cylinder sibling, and very enticing in just the right circumstances; though it ought to be cheaper still.
Open gallery
Close

It’s striking - a touch concerning, even - to note just how modern a car-making outfit the Morgan Motor Company has become. In June last year we drove the firm’s range-topping Plus Six sports car, whose all-new, ‘CX’-branded aluminium monocoque platform marked the beginning of a new era for the firm. Now that era ekes its way onward, and it’s the turn of the related Plus Four to hit the road.

Among the tools being used to drum up interest in this car is - wait for it - an introductory personal finance offer. I know; who’d have thought it? I like to think some Morgan owners might wonder, when offered a 'PCP' deal, why on earth they’ll be needing discounted antiseptic with their brand-new ‘classic’ roadster. Others should certainly be interested to hear that, despite the slightly off putting list price, you can currently finance a Plus Four for less than an entry-level Porsche 718 Boxster or an Audi TTS Roadster.

Very sturdy residual values are to thank for that. Those residual values will doubtless also be the excuse used to seek to justify a near-doubling of the Plus Four’s pricetag over the course of just six years. I’m not altogether sure how Morgan’s more traditional customer base will feel about a four-cylinder roadster with a starting price beginning with a six, although my guess would be pretty sore. It’s certainly a big chunk of change to divert from your pension pot, and for the kind of car many will have wanted forever and will want to keep for almost as long.

To give Morgan it’s due, that £63,000 buys a car of quite different characteristics and capabilities than any other four-cylinder Morgan in the company’s 110-year history. The Plus Four’s performance level has certainly been transformed, and its drivability and refinement greatly improved. And yet it’s still a Morgan - idiosyncratic and lovable, but not as usable, sophisticated or rounded as other modern sports cars, even now. Somehow this still feels like the Series I Land Rover of the two-seater market, for all the good and ill that might imply. 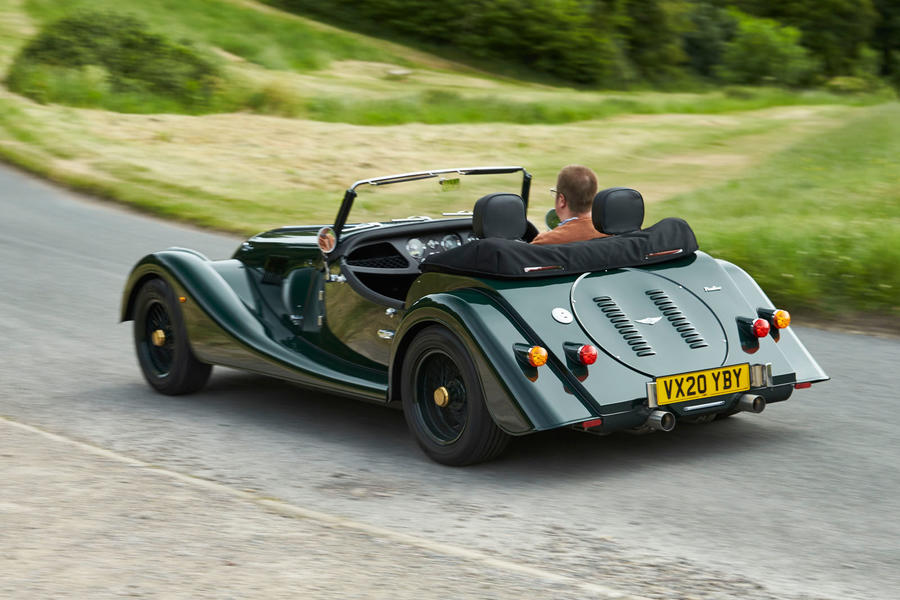 Did somebody say Land Rover? Perhaps the similarity is so strong because, just as in the Landie, the Plus Four has a driver’s door you must, at least in part, remove in order to best accommodate your right elbow. Luckily the upper part of the doors can be detached pretty simply; and it’s in top-down, minimal-doored mode you’ll want to drive this car, when the sun’s out and you’ve got nowhere particular to go other than around on the map in largish, unhurried circles.

The car’s cabin does feel a touch narrower than the Plus Six’s, but it’s still long enough to accommodate a taller driver comfortably. The dashboard and control layouts, meanwhile, are identical to those of a Plus Six; both are pretty simple, attractive and work well, but for the inconveniently distant analogue speedo. Material fit and finish levels are mostly good, although a few more ‘period’ features - retro stylised instruments and more alluring switchgear - wouldn’t have gone amiss. Cargo space, meanwhile, is in pretty short supply, the only place you can put bags being a shelf behind the seatbacks big enough for a couple of smaller soft holdalls only.

Having been developed alongside the Plus Six, the Plus Four differs from its sibling chiefly on BMW-supplied power source: instead of having the turbocharged straight six and eight-speed automatic gearbox from an M340i, it uses the 2.0-litre, 255bhp, four-cylinder turbo from a 330i. Unlike the bigger six-cylinder motor, though, the BMW ‘B48’ four can be had with a choice of manual or automatic transmissions; and so the Plus Four can be also.

If you go for the cheaper manual, your Morgan gets less peak torque than an auto would (the two-pedal version gets 295lb ft) and it’s also a touch heavier and slower-accelerating. Even so, a four-cylinder Mog that tops 250 horsepower, and that gets so close to the 5.0sec marker on the 0-62mph sprint, has been hitherto unknown. The fact is, this one is now as brisk as you’re likely to want it to be on the road, and would give up little on outright pace to any four-pot sports car rival. It sounds gruffly, boostily characterful through Morgan’s aftermarket exhaust, and it’s also got more than enough torque to overcome the grip at those 15in wire rear wheels and 205-section tyres, and to bring the car’s handling to life; more of which shortly.

We tested both automatic and manual versions of the car, and the latter quickly confirmed one of the things that was missing about the related Plus Six’s driving experience. In a car like this, you want as much physical connection with and involvement in what’s going on at the wheels as possible. The Plus Four’s manual shift feels meaty but not overly springy or obstructive, and allows you a vital means of engaging with the car, particularly at everyday speeds. It’s a simple, tactile pleasure to use, thanks in part to a well-weighted and progressive clutch pedal.

The auto, by contrast, is so busy with shifts when left in ‘D’ that it feels like the car’s driving itself at times - which, in a Morgan, seems bizarre in the extreme. Our auto was also a little overly keen to creep when stationary - so you find, having first stopped the car, you then have to squeeze the brake pedal harder in order to hold it at a standstill. Annoying. 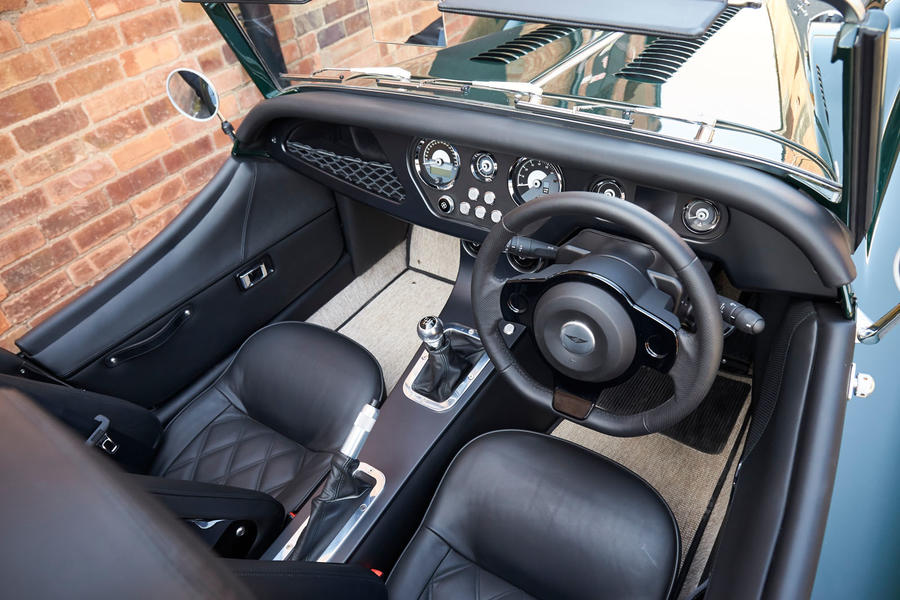 I’d certainly have a manual. I’d also save any money Morgan is asking for upgraded alloy wheels and leave the car on those lovely wire ones. The standard wire 15s provide just the right amount of grip for the car (and not a shred too much), as well as plenty of sidewall to improve the ride.

There’s a sweetness to the Plus Four’s on-road handling at just the right speed which was absent from the Plus Six I drove last year. It’s engendered in part by the narrowness of the car’s chassis (there’s 78mm less overall width here than in the six-pot Morgan); by the relative lightness of the car’s nose, perhaps; and by those smaller, skinnier contact patches which can be worked more delicately than those of the Plus Six.

The car’s very pleasant indeed at town speeds. It steers with gentle but consistent weight and pace, and has a pretty comfortable low-speed ride. Speed up to a 40- to 50mph, UK B-road-typical pace and the car thrives. It can be stroked along easily and with confidence and, although the front axle is at some distance from your fingertips, it feels like no gap is too narrow to be threaded. Handling and ride are alike nicely fluent; there’s masses of torque for easy-cruising drivability; and not so much wind howling around the doors and windscreen to lift a hat off your head.

Here, the Plus Four is in its gently wombling, ‘classic motoring’, having-fun-and-hurting-nobody element. That said, the faster you go from there on out, the less comfortable both the Plus Four and its driver will become. Bigger speeds and tougher surfaces make the car’s ride begin to feel wooden, just as the Plus Six’s did. I suspect that the car’s suspension lacks the travel to deal with bigger inputs, and too often hits its bumpstops, stressing the chassis each time and disturbing the primary ride. And just as it disappears from the car’s ride, so the fluency previously mentioned in the car’s handling likewise deteriorates. You end up negotiating with apices, input by input through that slow-paced steering, rather than carving smoothly through them - and the harder you attempt the drive the Plus Four, the starker its shortage of fundamental handling agility seems. 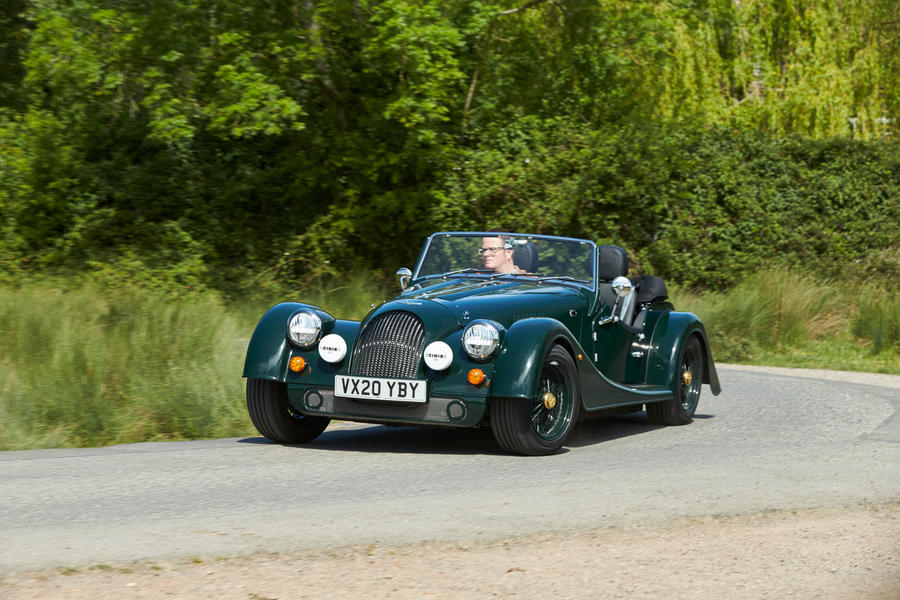 What’s clear, even after only a few hours in the new Plus Four, is that some familiar limitations would apply to the car’s ownership experience that wouldn’t necessarily be obstacles in other £60,000 roadsters. You wouldn’t want to have very far to travel in, or to have to rely for everyday use on, a car that even now remains so dedicated to savouring those special trips taken at fairly gentle pace.

That said, you also now needn’t stray any further up the Pickersleigh Rd model range than this to find a car that represents the very best of what its maker offers. The most convincing thing this Plus Four does is genuinely to make you question how much more Morgan anyone would want or need. That, in this tester’s experience, isn’t something that any four-cylinder model from the firm has managed before. And if anything’s going justify that hefty asking price tag to the people who really matter, perhaps that’s the thing to do it. 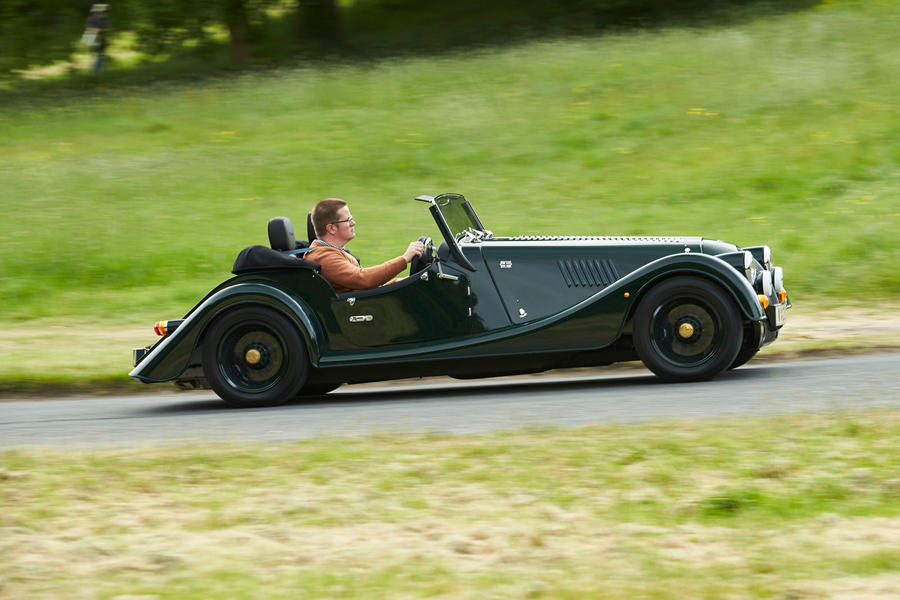 I sold my Plus six to buy a Plus four!!

I wonder what that starting price will do to the previously rock solid residuals? The second hand market has a way of finding the true value of these things.

I suspect they will hold up

I suspect they will hold up quite well given the low volumes and ageing population many with funds to capture the spirit of the age.

How much? Ah well guess it's

How much? Ah well guess it's another dream on car for me to just admire then. It is massively more expensive than the previous but as others have said it really is all you'd need and is a hand built piece of craftsmanship which, to a large extent, justifies it's price. I would love this and would get one, if I had the money, over any of the, sort of, competion mentioned in this review. It just looks so right and appeals on so many levels.
Pelagic 4 June 2020

How much? Ah well guess it's another dream on car for me to just admire then. It is massively more expensive than the previous but as others have said it really is all you'd need and is a hand built piece of craftsmanship which, to a large extent, justifies it's price. I would love this and would get one, if I had the money, over any of the, sort of, competion mentioned in this review. It just looks so right and appeals on so many levels.

Yes, it's a lovely living relic of a Bristsh bygone motoring era that is to be congratulated for its stoicism, tradition, build etc.

It's also a prime example of demand inelasticity to price increases, where their target market can afford it and dont seem to give a stuff about doubling of prices in last few years, cos they value the brand.

I'd like one for Sundays, as we move out of the age of the ICE, it will remain be a desirable experince for many.   Look at the Renaissance in hi fi turntables and vinyl music in the digital age.

Morgan have done welll to survive as long as they have. I am old enough to remember th John Harvey Jones documentary in Malvern 30 years ago..

It's just such a shame it is

I love this in the same vein

I love this in the same vein as I love the heritage design caterham super 7.
View all comments (9)