From £23,7806
Mini Countryman JCW gets four-wheel drive as standard and an extra 39bhp over the Cooper S – but the end result hardly justifies the premium
Open gallery
Close

Be it winning the Formula 1 World Championship, dominating at the Monte Carlo rally or having a hand in producing one of the most iconic automobiles of the 20th century, Charles and John Cooper have arguably done more for British motorsport and the perception of the UK’s automotive industry than any other constructor, tuner or mainstream manufacturer.

But do you think either ever stopped to consider, after all their success with predominately lightweight racers, that one day, their family name would be affixed to the back of a near-1550kg ‘Mini’ crossover? No, we don’t think so either. But that hasn’t stopped BMW from subjecting its ‘big Mini’ to the full JCW treatment.

As with the Clubman JCW, the standard Countryman Cooper S’s 2.0-litre four-cylinder petrol engine has been uprated with a new heat-resistant turbocharger and additional intercooler. The net result is 228bhp, 258lb ft of torque and a 0-62mph time of 6.5sec - 0.8sec faster than the next-hottest Mini Countryman. And that time should be repeatable too, thanks to standard-fit launch control and Mini’s All4 four-wheel-drive set-up.

Naturally, to support this extra performance, the Mini Countryman’s chassis has also come in for some attention. Firmer JCW sports suspension with adaptive damper control promises flatter cornering, Brembo brakes with four-piston callipers should help to reduce fade, and the eight-speed Steptronic automatic gearbox has been tweaked for faster shifts. 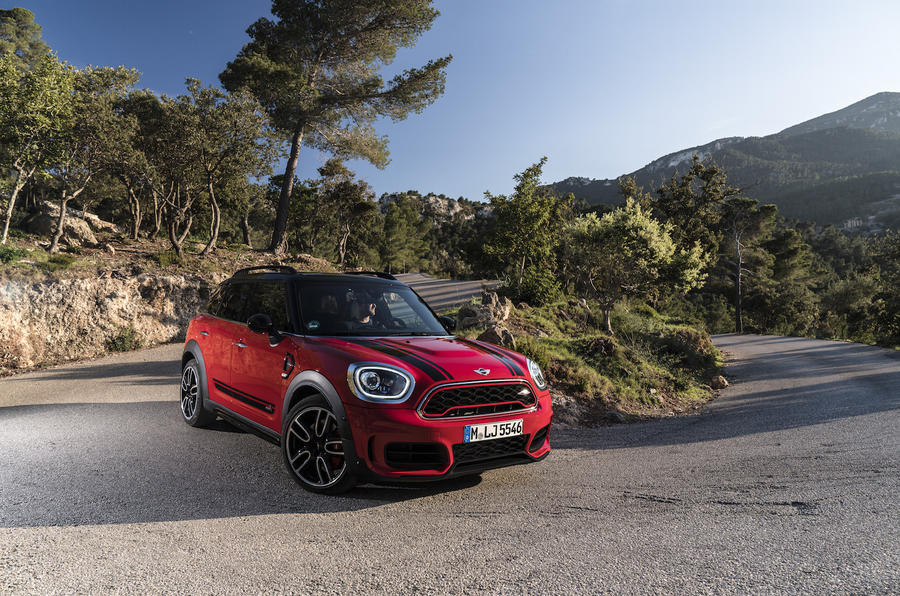 With sales of SUVs and crossovers increasing year on year, no longer can we expect Mini to restrict itself to producing pint-sized, era-defining city cars. What we can expect, however, is for hotter JCW models to deliver a more engaging and tactile driving experience than their increasingly straight-laced competitors.

We concede that getting a relatively tall vehicle to handle is no easy feat – just ask Nissan about the Juke Nismo RS - but within the first few miles of our test route, it was clear that Mini’s chassis engineers have equipped this car with prodigiously firm suspension, highly strung brakes and a steering rack that manages to translate all but the most delicate of inputs into sudden sharp changes of direction; all to ensure that the JCW shares the same ‘go-kart feel’ of the smaller Mini hatchback.

The result is a car that indeed feels smaller than its lengthy wheelbase would lead you to expect, but there’s no hiding that portly 1530kg kerbweight. Push on and the chassis feels distinctly lifeless; Mini claims that 100% of the engine's power can be sent to the rear wheels when required, but in reality, the system feels predominantly front-biased. On a trailing throttle, the Countryman JCW is quick to fall into understeer and, in the dry at least, the chassis is deaf to most attempts to neutralise the handling. 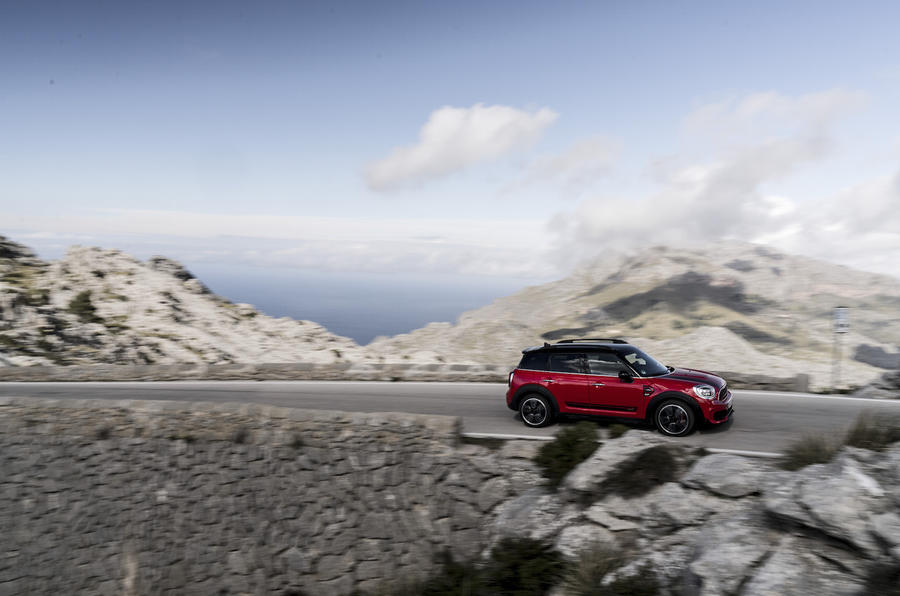 All this could be forgiven if the Countryman JCW was scintillatingly quick in a straight line, but unfortunately you never quite get that ‘pushed into the back of your seat’ urgency that ought to be guaranteed by 228bhp. Even in the lower gears, the acceleration feels somewhat limp – something we suspect is down to the fact that the Mini Countryman weighs around 200kg more than an equivalent Cooper S hatchback. Instead, it’s best to leave the Countryman JCW in its middle drive mode setting and simply waft around, letting the slick eight-speed gearbox make use of the engine’s accessible torque.

Doing this also gives you the time to appreciate the car's revised interior. JCW models get wonderfully supportive bucket seats, a sportier multifunction steering wheel and lashings of Alcantara on the doors and headliner. This is a premium product with the high-grade materials to prove it, and while the illuminated dashboard and door trims don’t really add much, it’s a far more characterful design than those of its competitors. 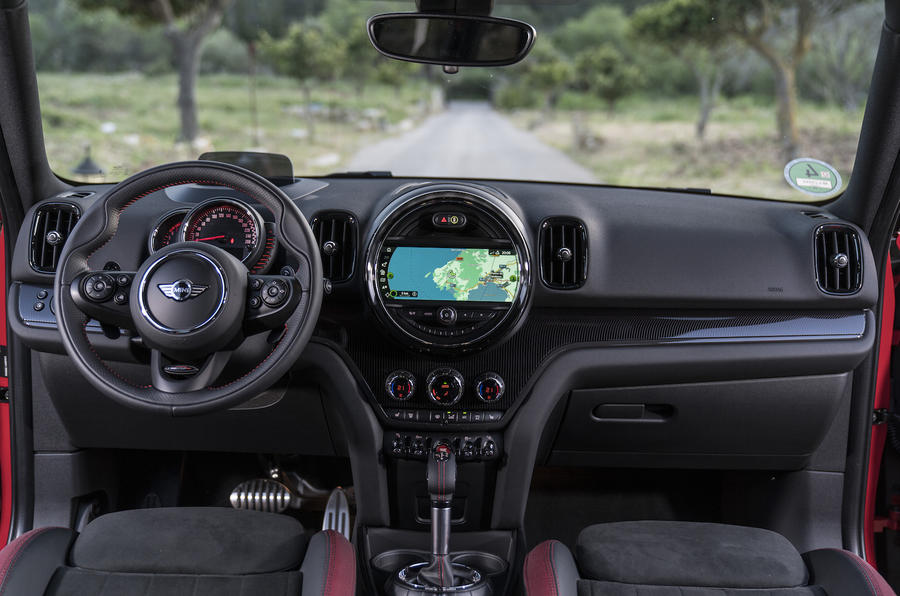 We don’t doubt that the business case for the Countryman JCW is strong. A more purposeful-looking exterior, a well-appointed interior and the prowess of the JCW badge will be enough for many. Yet we can't help but feel that a standard Countryman Cooper S will fulfil much of what the JCW is trying to do, but for less money.

Sure, it doesn't sound quite as characterful at full chat, but it accelerates, stops, turns and goes about its business as a sporty crossover with a similar level of verve. It’s also hard to ignore the notably wide range of hot hatches on sale today, which are equally as practical as the Countryman JCW but considerably more involving to drive.

The more I see

Yes I live in Russia and BMW must be delighted how well the variety of models sell here. For me - they are beginning to annoy me as much as an X6 still does. There is NOTHING mini about these bloated expensive cramped fashion statement !!
xxxx 12 April 2017

If this was knocked out by Kia or Vauxhall with a £33,000 it would be laughed at, but with the might of BMW marketing there'll always be buyers. Common sense RIP
Cobnapint 12 April 2017

If this is supposed to be a Mini

Why aren't the headlights round anymore, why doesn't the car look cute, and why isn't it 'mini'.
The designers have taken this car so far away from it's original USP that it's now an also-ran instead of being a desirable front runner.
catnip 12 April 2017

Why aren't the headlights round anymore, why doesn't the car look cute, and why isn't it 'mini'.
The designers have taken this car so far away from it's original USP that it's now an also-ran instead of being a desirable front runner.

I think its because its from the brand MINI, nothing to do with a description of size.