Until recently, Mercedes' GLC was available with a host of exotic trim inlays, colours, leathers and perfumes (yes, really). However, it wasn't possible to add a fifth and sixth cylinder to your diesel engine - it was the four-cylinder 220 d, pokier 250 d or, well, nothing. That's no longer the case, because with news that a full-fat AMG GLC 63 is on the way to join the lesser GLC 43, there's also the option of Merc's venerable V6 350 d.

Shelling out for the V6 brings 257bhp and a healthy 457lb ft. Considering the price premium, those outputs are a distinguished but required step up from the brace of four-cylinders beneath the V6 in the model range. Naturally, economy takes a hit, forcing official average fuel consumption down to 47.9mpg and CO2 emissions up to 159g/km. Not particularly good news for a private buyer, then, nor the company driver sitting across from the bean-counter pitching his or her case for a six-cylinder car. 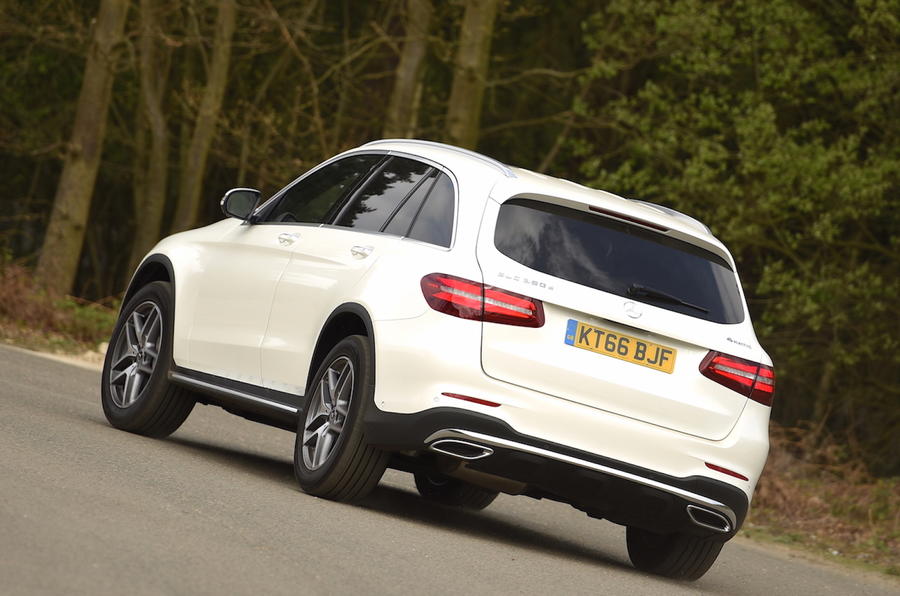 Although the 350 d isn’t the GLC you choose if your main concern is keeping the company accountant onboard, it is the most luxurious, grown-up GLC we’ve tried yet. Both Merc’s superb V6 diesel engine and the cosseting air suspension chassis are the reasons behind that.

There’s a reassuringly premium feel to the muscularity of this 3.0-litre unit. It swells stoutly at around 1600rpm and works effectively with Mercedes’ standard-fit nine-speed auto to provide confident in-gear flexibility - or a hot hatch-chasing 6.2sec 0-62mph sprint should the need arise. All the while, it remains easily the most refined of the diesel engines on offer to GLC buyers.

Similarly, the long-wave nature of the GLC’s optional adjustable air suspension pairs with this engine perfectly, providing sumptuous Comfort-mode waft at high speed and rounding off the majority of urban bumps well. It’s not without fault mind you, the odd sharp-pothole hole or rut capable of unsettling the body momentarily, especially at lower speeds when its stiffer Sports mode is employed. 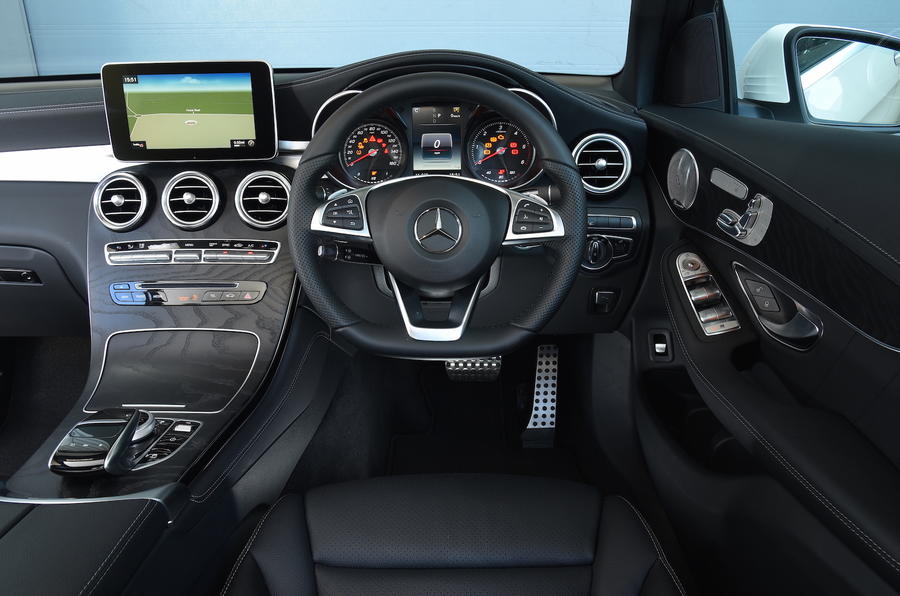 Considering the obvious focus on comfort, that the GLC isn’t the class benchmark for handling seems unimportant. True, like the 250 d, the 350 d benefits from a 31:69 power split front to rear (as opposed to the 220 d’s 45:55), but even so, both a Porsche Macan and Jaguar F-Pace offer a steering set-up and poise that is more engaging for the driver. The GLC's steering is precise, but the car rolls more than either of its rivals, and feels less agile.

Like styling, perceived quality is capable of splitting opinion, but this tester would argue the GLC innards are a step up from the Jaguar's in both look and feel, and arguably appear higher quality than the Porsche's, too. There's a more substantial feel to the Macan's trim, though, and its buttons creak less. Little things, but things that become more prominent when transaction prices hover around £50,000.

However, we prefer Mercedes' rotary-dial Comand infotainment system to both rivals' touchscreens and there's no arguing with the GLC's nicely supportive electric front seats and generous rear space, the latter being better than a Macan's but smaller than the Jag's. The GLC's boot, too, isn't class-leading, but at 550 litres and featuring under-floor storage, it is perfectly practical for most. Standard 60:40 split folding seats open up the GLC's space to 1600 litres should you need them to. 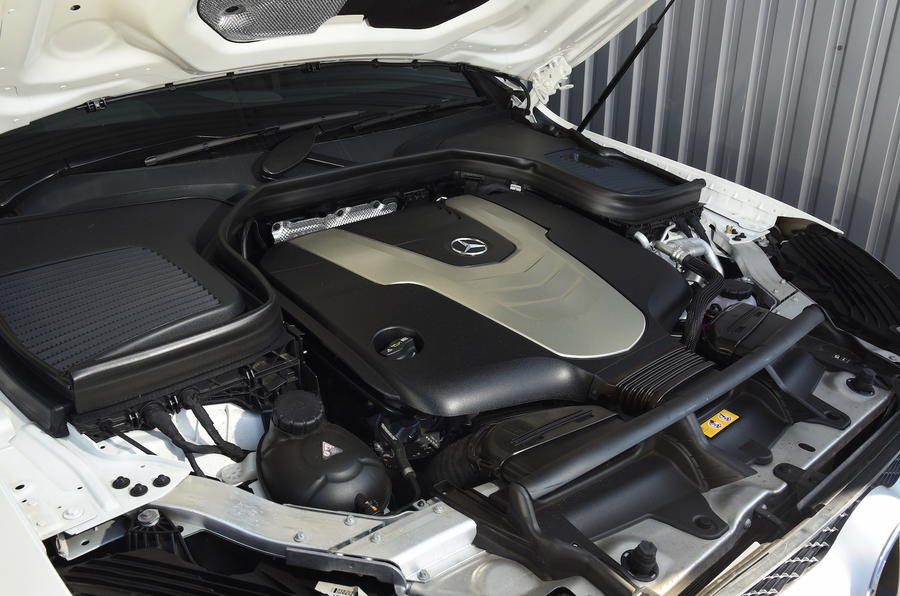 The company bean counter will be difficult to persuade: a 220 d GLC's 6% benefit-in-kind tax saving on its considerably lower P11D is the far more sensible option, while that variant's better fuel economy will appeal to everybody else. However, it's fair to say that the 220 d buyer will be getting a slightly less appealing GLC, and that the 350 d buyer is probably shopping in a different pool of small SUVs.

For that buyer, our opinion remains that the GLC is one of the best of its breed on sale, and that the 350 d is now one of the most recommendable of the GLC range. It provides less agility than an F-Pace, but, if it's your primary concern, more comfort and luxury. Ultimately, a Porsche Macan still earns its extra half-star for the way it manages to offer the best blend of all three characteristics.

As a recent owner of the 250 Sport GLC with air suspension, electric seats and a host of other extras I was massively disappointed with the ride comfort. My previous car was a BMW 5 series touring with variable damper control this had Sport +, Sport, Comfort & Comfort+ settings. The GLC had Sport+, Sport and comfort but the comfort setting was like sport on the BMW and did not handle low speed bumps well (or our famous pot-holes). Ive now got a rental car and a new BMW 5 series in SE trim and variable damper control on order.
Another issue was head room with the standard sunshine roof, I'm six foot two and I could feel my hair touching the roof with the seat in the lowest position, why a 4X4 has no proper head room is beyond me.
My back was in pain from driving it for five months it had to go the air suspension failed in my case expensively.
bowsersheepdog 18 April 2017

Taking the car out of Autocar

Yet another fat-arsed, shitty jeep. Strange thing is, I can see the mountains from here and there's never any of them up there.
Cobnapint 18 April 2017

Agree. I don't like the expanse in the centre either, or the display sticking out the dash. Or the electric seat controls on the door card. Nice car over all though.
View all comments (7)