7
The CLA 35 is easily the sharpest looking of all Mercedes-AMG’s junior performance cars, but is it a question of style over substance?
Close

If you fancy the idea of owning one of Mercedes-AMG’s new junior 35-badged performance models but think the A35 hatch and saloon look a bit, well, normal, let me introduce you to the new CLA 35 'Coupé'.

Quite a striking thing, isn’t it? Even in standard guise, the CLA’s swept-back roof and sharp lines mark it out as a bit of a looker. But with the subtle performance paraphernalia added by the crew at Affalterbach, the CLA 35’s additional level of visual assertion makes it all the more alluring. Mercedes is banking on this car’s appearance to be the driving reason why someone might buy one over its more workaday A 35 cousins and, as far as my eyes are concerned, I can see why someone might.

Beyond its rather pretty exterior, however, there isn’t much that differentiates the CLA 35 from the hatch or the saloon - not that that’s in any way a bad thing. Its turbocharged 2.0-litre four-pot, codenamed M260, is carried over directly and produces the same 302bhp and 295lb ft as in its siblings. A seven-speed dual-clutch gearbox sends power to the front wheels under normal driving conditions, but an electromechanically controlled multi-disc clutch housed at the rear can send as much as 50% of the engine’s grunt rearwards.

Suspension is by way of MacPherson struts up front and a multi-link arrangement at the rear, while Mercedes-AMG’s adaptive damping system comes as standard on our Premium Plus-spec test car. Given that the passively damped A35 Saloon we drove recently suffered from a shortage of low-speed compliance, it’ll be interesting to see whether this CLA is any more liveable with. 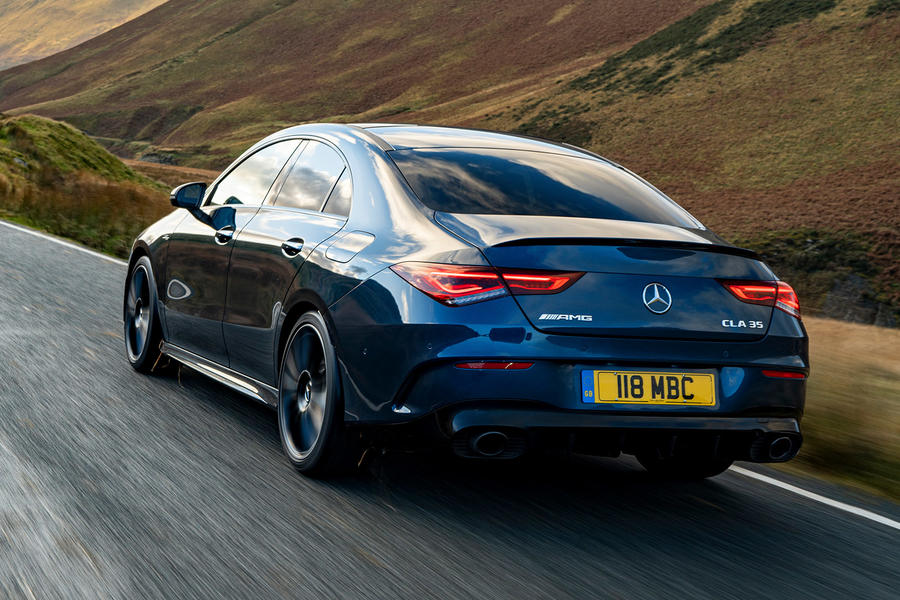 On Oxfordshire’s sleepy country roads, the CLA 35 makes for an interesting companion. With its AMG Dynamic Select programme configured to its angriest setting, throttle response is very keen indeed and the M260 engine has a fairly healthy appetite for revs.

This is a quick car by regular standards, and despite the fairly obvious amounts of synthetic aural trickery, it’s one that sounds good, too. Lift off the throttle and it pops and bangs on the overrun like a superheated witches’ cauldron. But in a similar fashion to its bigger, badder 416bhp A45 S relative, it doesn’t quite feel as quick when locked in gear as its numbers suggest it should. Which is a bit odd.

That seven-speed gearbox is a bit of a sore point, too. It’s far quicker to react to sudden throttle inputs than the often lethargic, post-WLTP dual-clutch ’boxes fitted to the likes of hot Volkswagens and Audis, but this is about the only instance where the Mercedes comes up trumps. It’s a bit over-eager to engage when pulling away from standstill and, left to its own devices, it can fumble full-throttle upshifts as you approach the redline. Then, in manual mode, it’s easier to bump into the limiter than you might expect - although if you keep the engine spinning around 3000-4000rpm, a tug on one of its rather plastic-feeling paddles will cause it to perform its duties in a much slicker fashion.

With those adaptive dampers set to Comfort, there is an appealing degree of pliancy when travelling at pace, and some of the passively damped A35’s low-speed skittishness has been addressed. On the motorway, it makes for a reasonably comfortable companion, despite the prevailing road noise. Nevertheless, the CLA continues to deal with lumps and bumps with a degree more aggression than than you’d get in, say, a Volkswagen Golf R.

All of which is a pain in town, but give it a sniff of B-road and it’s the Mercedes that feels like the more agile, engaging steer of the two. With the dampers in their mid-way Sport setting, the CLA 35 offers a well-judged blend of pliancy and body control, while its keenly weighted steering is quick to respond and imbues its driver with plenty of confidence in the front axle’s roadholding ability. To say the CLA offers abundant handling flare wouldn’t be entirely accurate, but it feels like a slightly more vivacious device than the undoubtedly effective but comparatively serious Golf R. 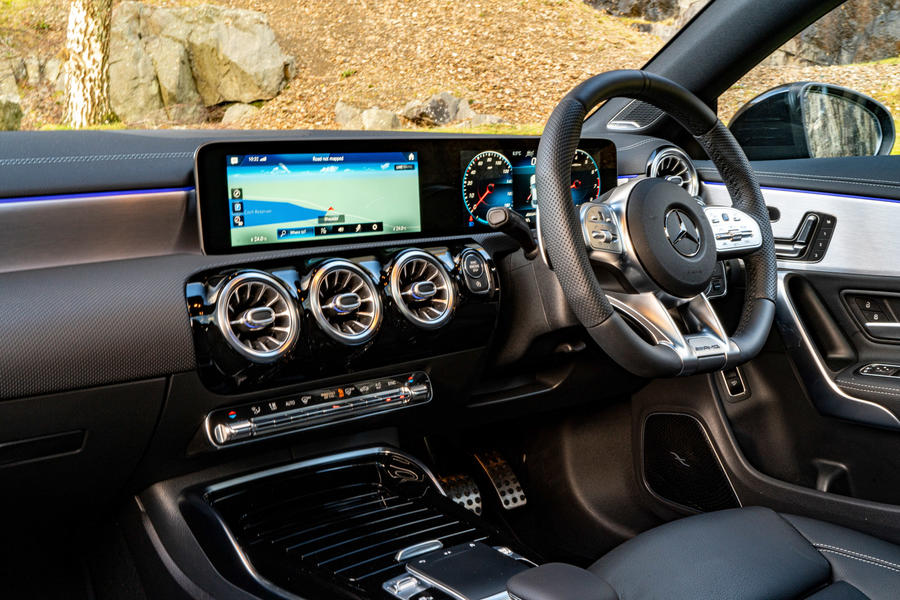 The thing is, you’d say the same thing about the way the A35 hatch drives. Because of the CLA’s dramatically sloping roofline, it’s the hatch that offers a more spacious second row, too - although its 370-litre boot is smaller than the CLA’s 460-litre luggage compartment.

But therein lies the rub. Although some might think the CLA 35’s added style and panache might make it look like good value next to the regular A35, the fact remains that both sit staunchly towards the expensive end of the 'affordable' performance car spectrum. And if you’re simply after a fast, practical and supremely engaging four-door thrill machine, you could just have the vastly superior Honda Civic Type R for a whole lot less. I know I would. 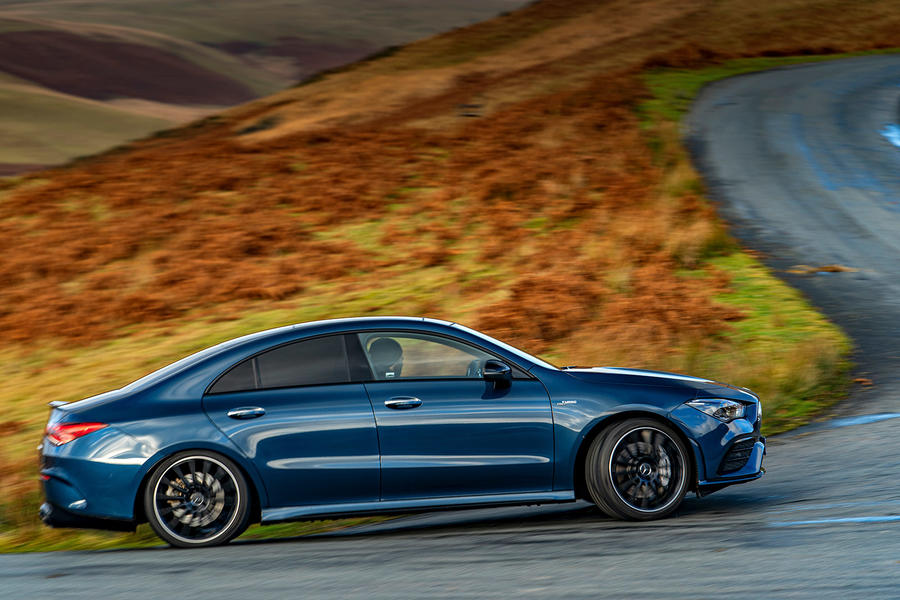 Doesn't anyone else think

Yes. And very annoying too!

7 February 2020
possibly the owner was someone who would've, in the past bought a TVR...

Yes, it's the automotive equivalent of shouting at strangers as you walk down the pavement. Very immature.

But for some reason motoring journalists seem to love them, and almost criticise a sporting model if they don't have them. Young children throw tantrums to get attention, and driving a car with synthetic pops and bangs is the motoring equivalent.

Driving on a busy motorway

Driving on a busy motorway yesterday I heard a rythmical grating noise.  An expensive repair sort of noise.  Looking round I saw a cement mixer, it was the concrete swishing around in the drum I could hear.

Go electric, so quiet you can hear birds singing (and concrete in mixers)  No fancy popping and banging noises for me. I grew out of that with cards, clothers pegs, and bicycle spokes years ago.

7 February 2020
Almost £46k for a small, hatchback based, saloon car that isn't even the halo model! Meh!

Why not a type R plain and even more efficient without oversized spoilers and better underbody  aerodynamics!?