From £15,5408
Mazda has added black trim to this limited-run version of its small car, but hasn't messed with its dynamics. How does it compare with the Seat Ibiza?
Open gallery
Close

The Mazda 2 was only updated last year, but the Japanese firm has now refreshed the small car range further – and, while doing so, has produced this 500-run limited-edition Sport Black model.

The first thing to note about the Sport Black (which follows a previous Sport Black model from 2015) is that it’s not particularly black; the colour is reserved, in a nice, glossy variety, for the series of exterior details – including a rear spoiler, skirt trims, the front grille, alloy wheels and mirror caps – that mark this car out as a special edition.

The other thing to note about the Sport Black is that it isn’t overly sporty; power comes from the mid-range 89bhp version of Mazda’s 1.5-litre Skyactiv-G petrol engine, powered through a five-speed gearbox, rather than the six-speed unit available on the most potent 113bhp version.

Incidentally, that Skyactiv-G engine, in three states of tune (there’s also an entry-level 74bhp option), is now the sole powertrain for the 2, with the diesel offered previously dropped as part of that range refresh.

Elsewhere, Mazda has slimmed down the number of trim levels offered on the 2, with five now available to choose from, many of which getting extra kit. 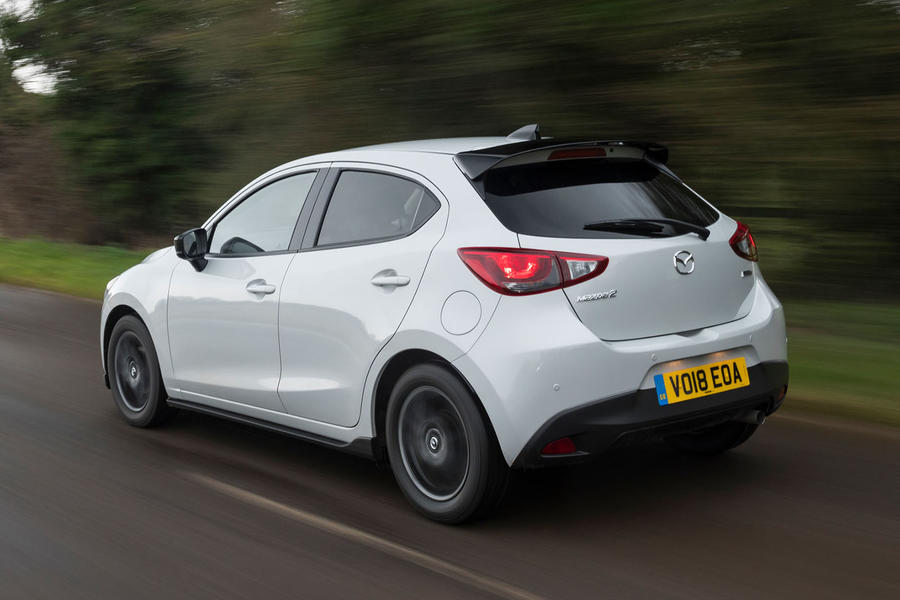 Despite adding some extra kit to the 2’s various trim levels and some glossy paint detail to this Sport Black version, Mazda hasn’t messed with the mechanicals of the supermini.

That’s no bad thing, given that it only reworked the car recently and the 2’s handling and performance have earned the car a solid placing in our ranking of the top 10 superminis. Mazda’s philosophy of producing cars with relatively low weight and powered by efficient engines pays off here.

The 89bhp version of the Skyactiv-G engine in the Sport Black performs best when it’s being worked. While there are occasional flat spots in the power delivery when not using many revs, put the effort in and the engine is capable of brisk progress, helped by a typically excellent Mazda gearbox. The engine is also efficient; we were able to average just over 50mpg during our test.

The ride is largely good, too, feeling smooth over all but the roughest of bumps, combined with consistent, well-weighted handling.

It’s worth noting that this 2’s combination of ride, handling and mid-range engine doesn’t necessarily result in the sportiest of packages. This might disappoint those who take the Sport Black’s name literally, but there is enough performance for most buyers of this type of car.

The £15,995 Sport Black is largely based on the mid-level SE-L Nav+ trim, which means you get automatic lights and wipers, LED foglights, rear parking sensors and adjustable cruise control. For comparison, a 2 in SE-L Nav+ trim with the 89bhp engine costs £14,895.

The interior layout is largely unchanged and you’ll find little to criticise here; it’s simply laid out, clear, uncluttered and comfortable. The seats are supportive and the controls are where you’d want them to be. Sport Black models get a few extra trim details, including some carbonfibre effect on the dashboard.

That said, the 7.0in colour infotainment screen (which can also be controlled with a centre console-mounted rotary dial) is beginning to show its age compared with the bigger, brighter systems in newer class rivals such as the Seat Ibiza and Volkswagen Polo. However, much like the way the 2 drives, what the infotainment lacks in shine it compensates for with an intuitive, easy-to-use system. 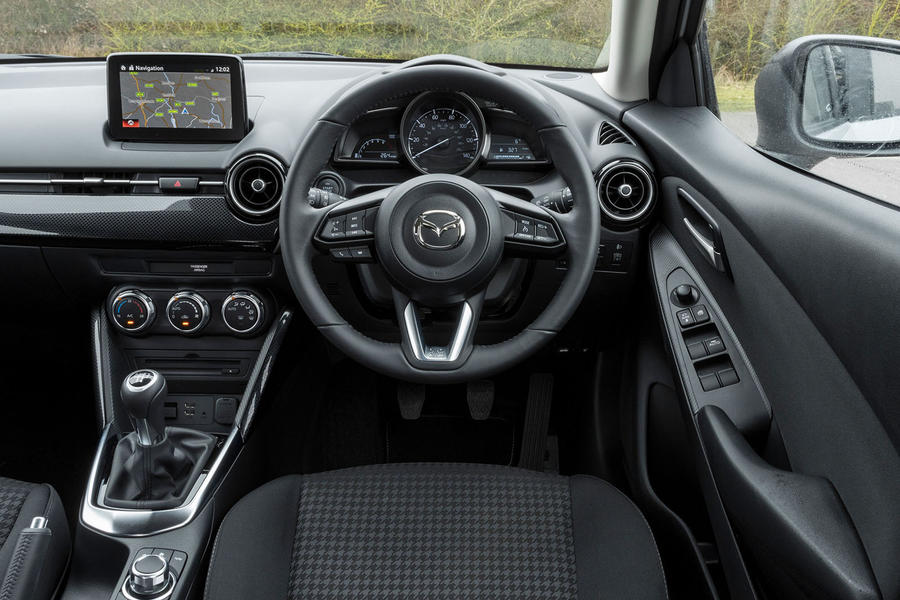 Even wearing its Sport Black finery, the 2 can’t quite match newer rivals such as the Seat Ibiza or Ford Fiesta when it comes to features, equipment and all-round shine - and, at £15,995, this special edition is not far off the price of the £16,015 list price of an 89bhp 1.0-litre Ibiza in mid-level FR trim. But there’s still plenty to recommend here, especially if your priorities lie on the dynamic side and you're looking for something a little different from your small car.

In some ways, it seems fitting that Mazda has ‘simplified’ the 2 range with this refresh; the Mazda 2 is a supermini that succeeds because of its simplicity. It stays true to Mazda’s Jinba Ittai philosophy rather than worrying itself with trying to mimic flashier rivals.

That results in a simple, pleasurable car that's capable of rewarding and entertaining an involved driver. That said, unless you're particularly fond on limited-run models and glossy black trim, it's worth questioning the £1100 extra for the Sport Black. 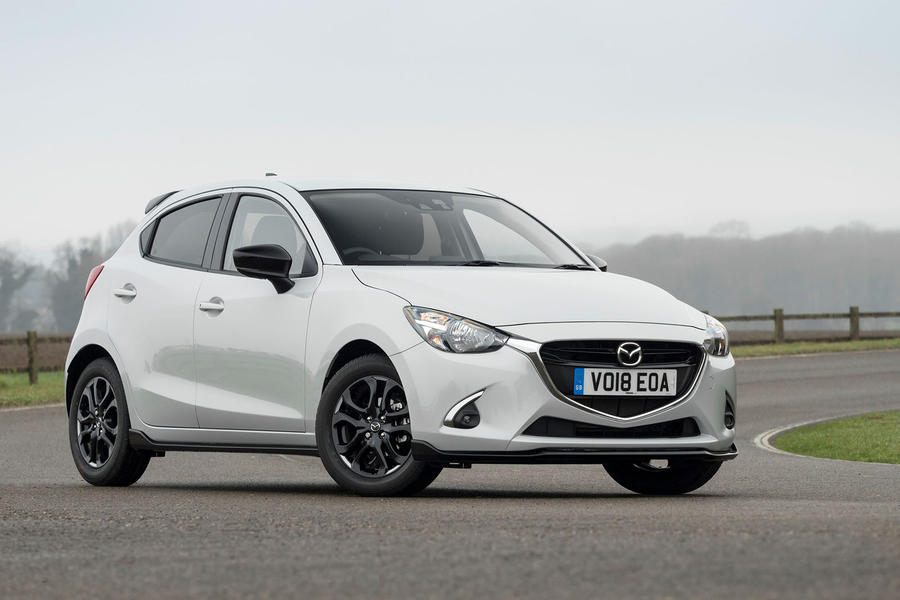 Starting speed is up is great

Beginning accelerating is awesome, regardless of the way that the customized 'box required more edginess going up through the riggings, UK Dissertation Help a consequent measure of wealth engine revving. Regardless, once up to speed, the engine is smooth, quiet and reliable.

A lot of negativity here, I

A lot of negativity here, I've always liked these and it would be my supermini of choice for several reasons. It certainly isn't dull, it is a fun to drive and relatively brisk car with excellent economy, that I also prefer naturally aspirated to turbo charged sways my judgement further plus it's size is that of a supermini as opposed to so many that are the size of a family car from 2 models previous, have got to agree that the pricing for this spec is too high but then I think all cars have become too pricey. I would bet on this being more economical in the real world than downsized turbos that are always on boost and probably a lot more reliable.

...plus it's size is that of a supermini as opposed to so many that are the size of a family car from 2 models previous.....

The previous model was nice and compact, but this version is at the top of its class lengthwise, slightly longer than the latest Fiesta, and even the bulky looking Polo.

Fair one, I haven't compared

Fair one, I haven't compared actual dimensions I was just going by how they looked when I was admiring them on a used forecourt the other day. Still like them though.

The current (2015) Mazda2 is just 6 inches longer than the previous model, and the same width. It's surprisingly roomy and nippy due to lack of overall weight. Manages to make the Polo look about the same size as a Mark 4 Golf oh, it is!

Maybe it’s because it got passed by the Ibiza and could never match the Fiesta, would an Engine with 115bhp not have helped? The Mazda two was a tidy handler....