From £81,7507
Share review
Still not as practical or involving to drive as other luxury GTs, but very enticing in other ways, having taken some meaningful dynamic strides
Share
Open gallery
Close

The elegant, strange and unusual Lexus LC is the kind of car you’ll notice when you see one. Can’t help but. Not quite a sports car, nor quite a muscle coupé, and in some ways not a natural GT, either, it has the distinctly science-fiction-flavoured aspect of the inter-dimensional galactic time-traveller about it. Of a car somehow estranged from its natural place and context, but all the more exotic, fascinating and appealing because of it.

On sale in the UK since 2017, the LC had a significant model-year revision in 2020 when a cloth-top convertible version was brought in alongside the existing fixed-head coupé. Lexus’s atmospheric 5.0-litre petrol V8 is the only engine on offer in the new ‘LC C’ roadster, but the coupé still offers both that engine and its maker’s latest-generation multi-stage hybrid powerplant. The latter powers the car we’re testing here.

The main electric drive motor is capable of adding up to 177bhp and 221lb ft of torque into the driveline when there is enough power in the drive battery to support it and it finds its way to the LC’s rear wheels along with the piston engine’s reserves (which are worth up to 295bhp). Lexus has updated the power management and control software of the hybrid system for this version of the LC and claims the car is more responsive in real-world driving conditions as a result. ‘Total system output’ power remains advertised as it was before at 354bhp, though, and a like-for-like combined torque figure isn’t quoted.

Other mechanical changes on the LC have been focused around its suspension and steering systems and are intended to create a clearer sense of connection between driver and car, and a smoother, more linear and more responsive character to the driving experience overall. Aluminium has been used more intensively throughout the car’s multi-link axles to reduce unsprung mass, and new lightweight coil springs and hollow anti-roll bars are included, too. The car’s adaptive dampers have been retuned up front, while the lateral stiffness of its suspension has been increased at the rear. The LC’s variably geared power steering system has been recalibrated as well, and its mountings have been reinforced.

As standard, 20in alloy wheels feature, with forged 21in rims fitted to upper-level Sport and Sport+ models. However, all of those rims now come with conventional performance tyres instead of the run-flats that early versions of LC had. Wander all the way up to top-level Sport+ on the car’s trim-level ladder, meanwhile, and your LC 500h will also get four-wheel steering and a Torsen rear differential – just as a like-for-like LC 500 V8 would. However, our test car was a mid-spec Sport example without either. 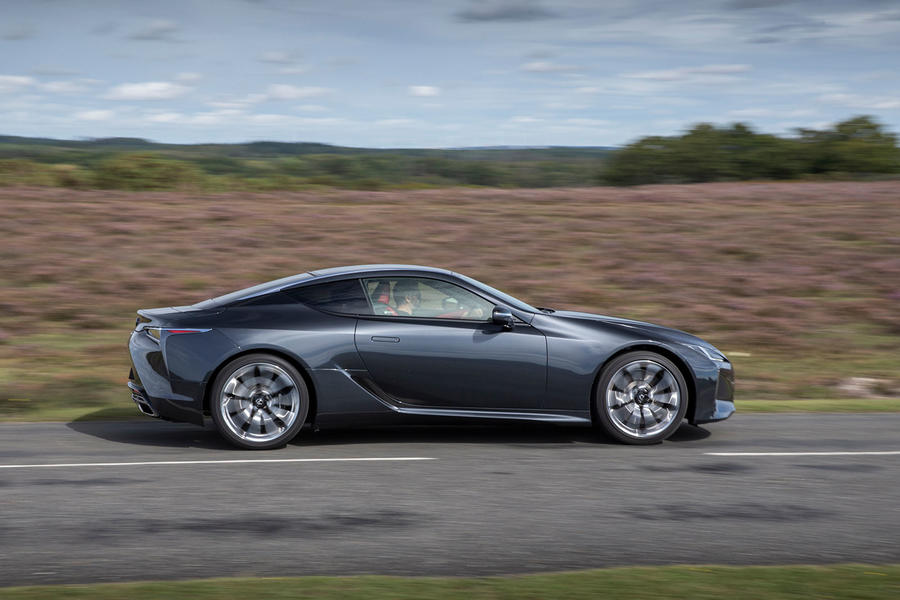 The LC’s visual star quality hasn’t dulled or aged. This is every bit as beautiful a car today as it was four years ago, and its chiselled good looks are still likely to be your primary motivator for buying one. It’s stunningly pretty and alternative – and how often do cars like that come along?

Now as it was previously, however, those good looks and svelte proportions come at a cost to practicality. If you’re used to the genuine four-seater usability of, say, a BMW 8 Series or a Mercedes-Benz E-Class Coupé, the LC’s cabin and boot will both seem a little small. The car’s roofline is low and the driving position a little high, so taller drivers won’t have much head room to spare, and although the car’s occasional back seats are usable for younger kids and smaller adults, they certainly don’t offer luxury-level space. The boot, meanwhile, is reasonably wide but a bit short and shallow, without any through-loading.

Lexus left the car’s interior mostly untouched in its 2020 update, apart from tweaking the infotainment system to allow smartphone mirroring capability. Except for lowering the seat a little, adding some steering column reach adjustment and addressing one or two usability bugbears, though, you wouldn’t change it.

The LC’s leather and Alcantara driver’s seat is soft and comfortable enough to do long days at the wheel, and it’s both ventilated and heated. The instruments are digital but for a physical bezel in the middle of the binnacle, and change their display mode with your selected driving mode. Some of the car’s secondary controls are curiously placed and seem a bit unintuitive: the high, pod-mounted drive mode controller, say, or the separate touchpad input device for the infotainment system.

But when you sit back and survey it as a whole, the LC’s cabin is a lovely place to be. It has the expensive and lavish materials, and the immutably solid fit and finish you expect of a Lexus, but also sweeping, wave-like forms, layered curving surfaces and strong, pillar-like vertical structures that come together with a real sense of artistry. This is also a driving environment with lots of modern technology, but where that technology isn’t given totemic status or allowed to dominate its surroundings as it often is in other luxury cars. It feels enduringly special and different.

Lexus’s modifications to the car’s powertrain and running gear have made it a more effective, refined and enjoyable luxury tourer, and have also reinforced the versatility of that hybrid system, which suits our everyday modern motoring existence very well and can give the LC a real turn of pace when it’s needed.

With its old run-flat tyres, the LC didn’t feel like it could ride, handle or steer to its true dynamic potential, but it’s now much, much better in all three respects. The car has both the width and the apparent heft of a GT rather than a front-engined sports car, yet now has respectable ride isolation to match, as well as a clear sense of compliance over undulating roads. The 21in wheels do introduce some fussiness and knobbliness into the cabin over sharper inputs and around town, but the fallout to the car’s secondary ride isn’t nearly as intrusive as it used to be.

Out of town, lateral body control is quite good and taut, and the LC steers keenly, with balance, and with some newly reassuring heft and feel. You perceive the car’s weight much more as it begins to heave and float a little when you take cross-country roads at brisker speeds, but not nearly so much when it’s changing direction. Even then, it’d be uncharitable not to make at least some allowance for the car’s comfortable tuning bias.

Lexus has added some extra crank speed to the rev range of the LC 500h's V6 petrol engine, which will now spin all the way to 6600rpm if you want it to (and it doesn’t sound half bad when it does, actually). But it’s on part-throttle responsiveness where this Lexus’s performance has benefitted the most. Dial the drive mode selector into Sport S or Sport S+ and you get a sizeable slug of torque from the electric motor with every half-pedal request for roll-on acceleration – so much so that it makes the V6 feel more like a turbocharged motor than an atmospheric one.

The gearbox operates much more like an old-school torque-converter unit than one of Lexus’s other three-speed-food-mixer-like hybrid drive systems. It does seem to shift up through a sequence of defined speeds even when you’re picking up speed quite gently, and it’s nicely responsive, too, when dropping down through the ’box in kickdown (although it still slips a little when doing so, and also when under lots of load).

It has a paddle shift manual mode, but it doesn’t deliver shifts very quickly or positively, and the closely stacked feel of having 10 sometimes slurry ratios to flick through isn’t the greatest encouragement to use it. Brake pedal feel remains squishy and a little ill-defined. But leave the driveline to its own devices and there’s plenty to enjoy about whisking this car along at a civilised, supple, ground-covering canter. 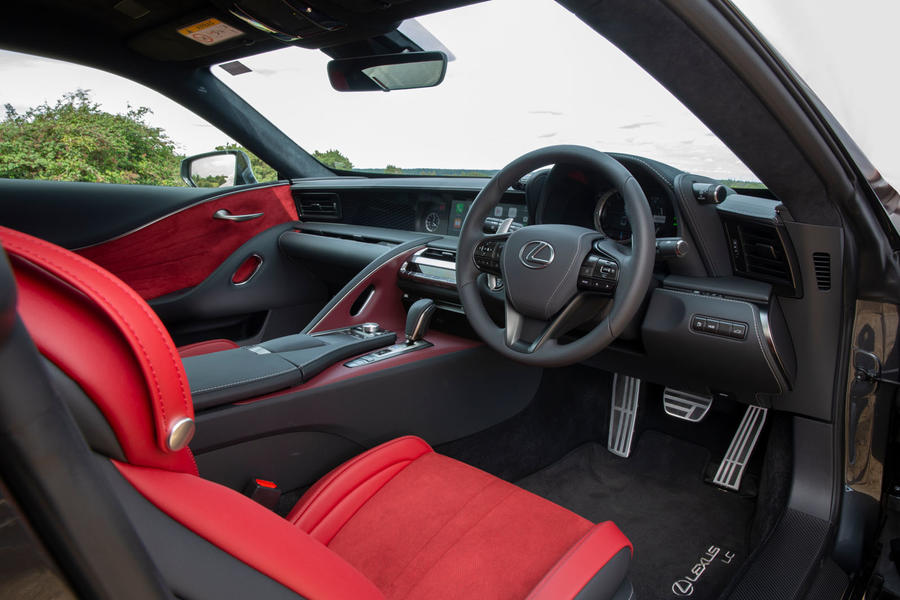 The irreducible, bottom-line, real-world abilities of this powertrain are hard to argue with. Put your foot down and the LC 500h takes off very quickly. Ease off and it’ll do 40-45mpg in its urban-dwelling Eco mode without making you try. Just stroke the car along normally and you’ll find there’s good drivability, lots of accessible torque, and top-level mechanical refinement evident, too.

For drivers who don’t crave a particularly close sense of connection to the major mechanicals of their car, and who don’t care which gear they’re accelerating or cornering in so long as it’s happening just-so, the LC 500h should do very nicely, then.

It’s still not quite a sports car and not quite a muscle coupé, especially not with this powertrain; but it is a better and more enjoyable everyday-use luxury tourer than it used to be, if you’re willing to pack lightly on those long weekend trips away. And it’d be a very nice thing to gaze at out of the second-storey bedroom window of your Cotswold country hotel, wouldn’t it? Just a little bit weird, granted, but really very nice indeed. 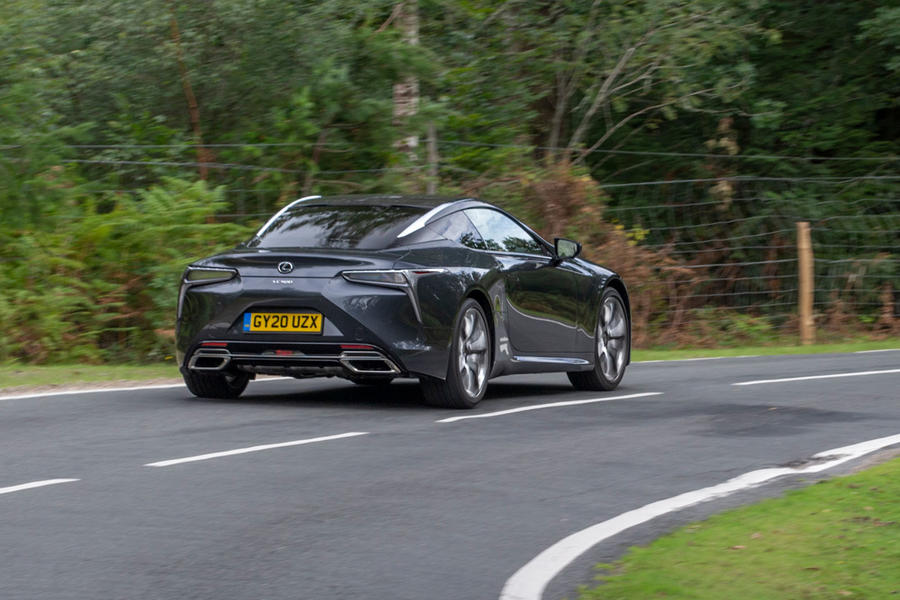 Japanese designs at the moment seem to be the most edgy and interesting. Really like the look of this.

So basically a superb grand tourer then (As Scout says below).  Comfy for the 98% of motorway miles and traffic on the way to the Cotswold hotel, yet fun enough for the 2 miles of A road at either end and looking cool yet different when you arrive!  I'm very tempted to get a 2 year old V8 version.

275not599 29 June 2021
Who wants to go grand touring with four people? How unromantic. A boot and an upholstered space behind the front seats to chuck stuff is perfect. That's what the Aurelia B20 had, and it invented the term.
View all comments (13)