From £86,3507
Fabric-roofed 2+2 only adds to the drama of V8-powered concept car-made-real
Open gallery
Close

The Lexus LC ‘concept car made real’ has been refreshed for 2020 and is now offered as a Porsche 911 Cabrio rival with a folding canvas roof. It's expected to prove more popular than the elegant fixed-head coupe has been so far.

This also happens to be the first Lexus ever to use a folding soft-top, because in the past both the IS and SC both had heavy origami hard-tops, which did the handling no favours at all.

The basic 2+2 layout is the same as that of the coupé introduced in 2017, with a naturally aspirated 5.0-litre V8 putting out an unchanged 457bhp driving the rear wheels alone. The less powerful 3.5-litre V6 hybrid motor available in the coupe won't be making an appearance here. We know from prior experience that the big, titanium-valved V8 is as soulful as they come, but recently the hybrid has proved more popular.

In the case of Sport+ specification tested here (add £5850 to the £90,775 base price of the V8), Lexus fits a Torsen rear differential to aid the Michelin Super Sport tyres, which replace the unloved old run-flats but are wrapped around the same unmissable 21in forged alloys. Basic models forego the LSD and use brake-based torque-vectoring instead, as well as wearing 20in wheels.

The Sport+ pack also brings neck-warmers integrated into the heavily bolstered seats, but what the coupe gets in Sport+ trim that the convertible doesn't – because of the space required for the roof when stowed away – is rear-wheel steering.

Downstream of the engine, the torque-converter transmission still has no fewer than 10 speeds – which still feels like at least two too many – but the multi-link suspension has been lightened with more generous use of aluminium.

Lexus has also increased the stroke of the front damper units in an attempt to relieve some of the brittleness of original coupé although, equally, a stiffer rear anti-roll bar is used to improve turn-in response. Further tweaks have been made to the brake setup and the variable EPAS. 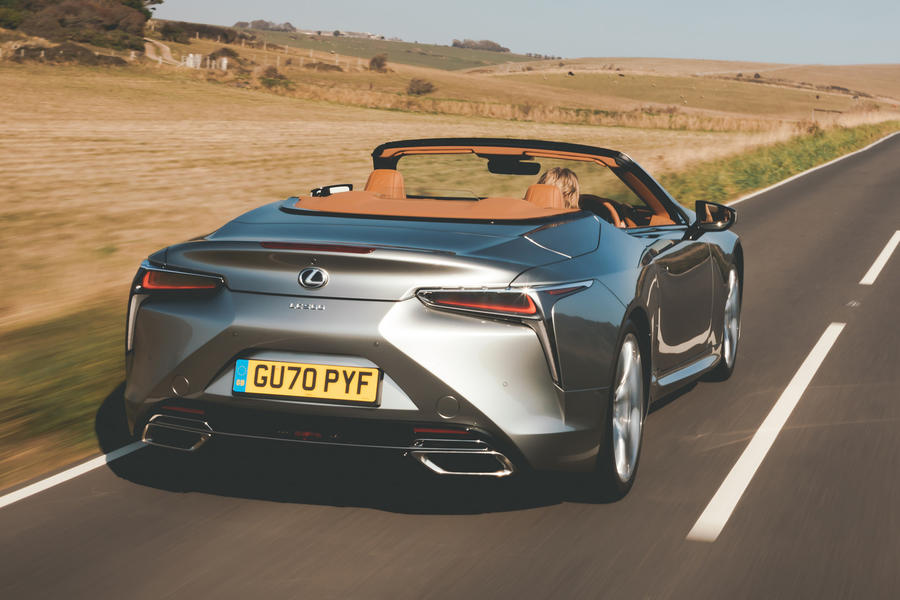 The roof mechanism itself is reasonably quick (though not as fast-acting as that of the new Aston Vantage Roadster) and operates at road-speeds of up to 30mph. The toggleswitch that controls the mechanism is then neatly hidden beneath a leather-clad flap on the transmission tunnel. The LC's cabin is otherwise unchanged, and keeps the tiny rear seats, which are more useful for luggage than humans.

But what a cabin this is. The camel interior of this car is especially fetching, but in any hue the interplay between curves, planes and hard angles feels likeably and exotically different to anything European. The recessed dashboard and organic-looking door-cards stand out in particular, and but for an inch more reach in the steering column, the driving position would be largely beyond objective fault.

Despite the detail changes, on the move the picture is more mixed, but perhaps convertible life does suit the LC’s demeanour better.

This car remains conspicuously well balanced and changes direction neatly. However, at 2035kg (100kg up on the coupe) and with an overt softness that works well on the straight ahead but holds the LC Convertible back during cornering, it certainly isn't as rewarding or precise to drive as some German or British rivals.

In general it wants (and needs) to be coaxed more than cajoled. The steering response is superficially keen, but the agility suggested by the exterior design isn't there. Peel away that skin and you'd see that the V8 engine sits slightly further forward than it might, and this is discernable. Slighty spongey brake-feel doesn't help.

The LC Convertible car laps up motorways, and is comfortable and reasonably engaging on A-roads, but B-roads are best left to others.

The car's strength is that it's such an affable cruiser, with one of the most distinctive cabins and refined in any class. The low-speed ride continues to suffer from the large wheels (though less so than before), and we’d take a smaller rim size if possible, but if you mostly intend to sit back, let the miles go by and enjoy the glorious intake roar of the V8 without being too concerned about the shortage of torque, there’s probably enough here to offer longlasting satisfaction and interest.

Lexus's decision to lose the run-flat tyres, and various changes it has made to suspension bushing and damper rates, has obviously helped elevate the LC's credibility as a GT car, and it should be seen as such. Moreover, wind buffetting is minimal, even at speed. 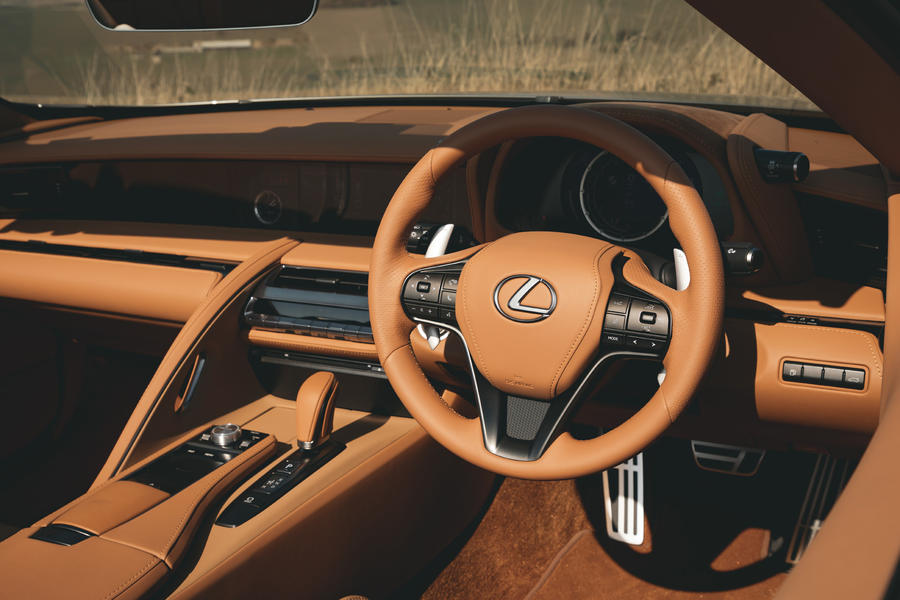 Perhaps this car should even be viewed as more of an under-sized S-Class Cabriolet alternative, even if the 149-litre boot capacity is hardly the greatest for touring. It's dynamic character is closer to that of the laid-back Mercedes than any Porsche or AMG, whizz-bang V8 or not.

The LC still drops jaws, and the convertible roof gives the experience another dimension, but it’ll remain an esoteric choice: far bigger on charm than broad appeal. 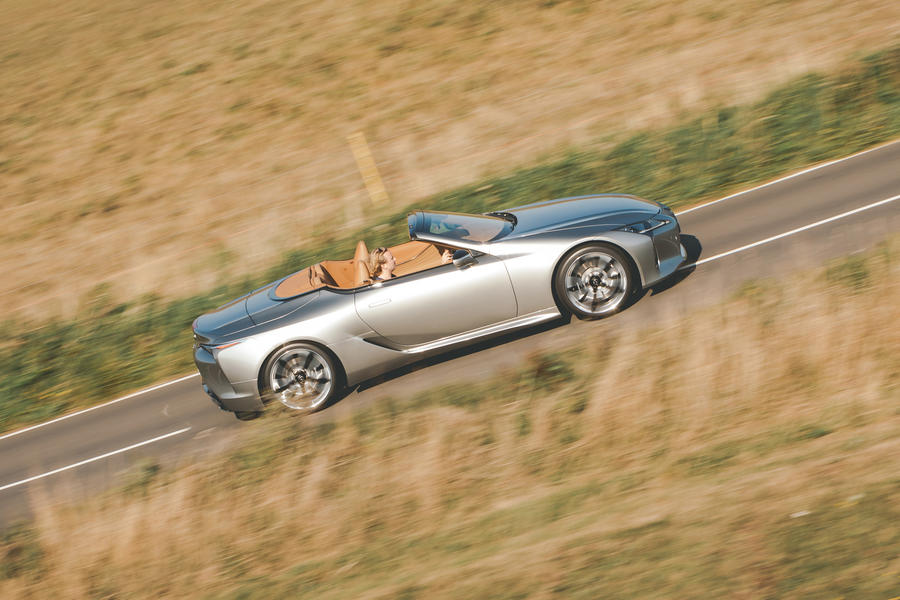 Esoteric because all you

Esoteric because all you Brits, said scribe included, are utterly predictable and dull. Punch drunk on za Germans. Oh look how lovely the glovebox shuts......good god get a life. What a beautifully engineered piece of naturally aspirated automotive sculpture. 3.5 stars! The fact it has an atmo v8 in this day and age warrants 5 stars. This car has more soul in one alloy wheel that some fat bling Audi. If it had an Alfa badge, the journo would give it another star. Why, because you cannot think for yourself....oh but its an Alfa darling. Stick to testing econobox hybrid skodas, vws, seats and Audis autocar and let the proper motoring enthusiast magazines test the proper cars.
Leslie Brook 2 October 2020

If that's how you feel, why are you as a presumably "proper motoring enthusiast" bothering to read this.

It has plenty of appeal.

What  a lovely way to waft about in the summer. Id probably take the hybrid a just enjoy some chilled motoring in a stunning vehicle