Track-only special will outpace a Huracán GT3 and serves as a mighty swansong for the firm’s naturally aspirated V12 lineage
Up next: Prices & specs
Share review
Share
Open gallery
Close

The naturally aspirated Lamborghini V12 was never going to die with a whimper.

Lamborghini has been using the configuration since its foundation, and although the Aventador’s replacement will stick with 12 cylinders, the company has confirmed that it will also be gaining hybrid assistance. So the Essenza SCV12 is set to be the last new Lamborghini launched with an unassisted V12 and, fittingly, it’s also the most powerful.

Yes, the Essenza is a track-only special and comes with a seven-figure price that many will regard as ludicrous. But it is far from being the rehashed Aventador many had accused it of being, using a carbonfibre tub designed to meet the safety standards of the FIA’s hypercar race class without the need for a separate roll-cage.

The biggest mechanical change is a back-to-front installation, compared with the Aventador, for its 6.5-litre V12, which allows a rear-mounted X-Trac six-speed sequential gearbox (with an automated clutch) to drive the rear wheels. Although the engine isn’t a stressed component, the transmission is.

Running without catalysts, the engine is freed to make 818bhp, accompanied by 560lb ft, and Lamborghini claims that needs to work against a substantial weight of 1470kg without fluids in the car’s lightest configuration, which means without the optional air-con. The other striking figure is the peak 1200kg of downforce the Essenza is claimed to be capable of making at 155mph with its wings in their most aggressive settings. 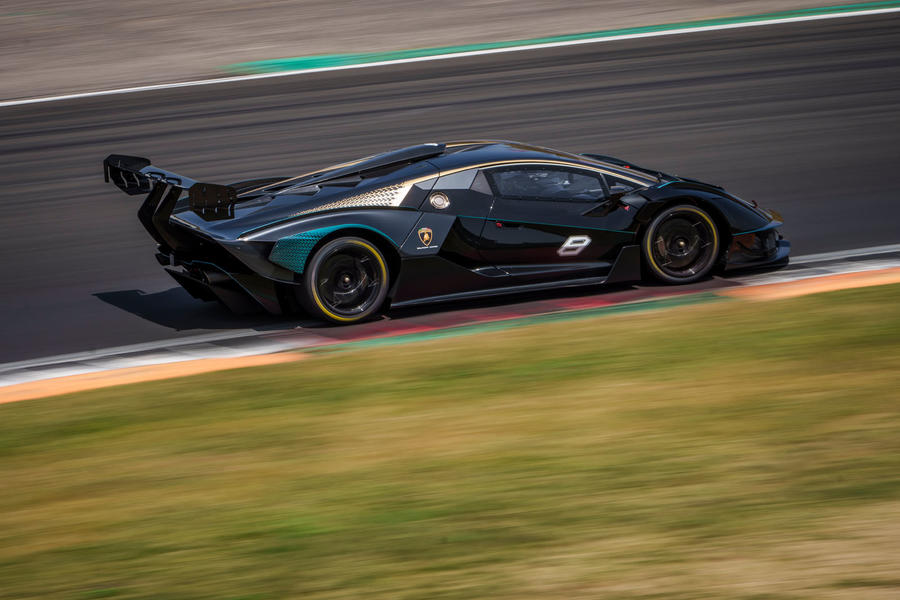 So although the Essenza isn’t a race car, the driving experience is very similar, a point Lamborghini has made by letting me first drive the Vallelunga track in the slightly slower Huracán Super Trofeo Evo 2 from Lamborghini’s one-make championship. With those laps still fresh in my mind, I get into the SCV12, which is raised on its integral air jacks and surrounded by mechanics. Lamborghini reckons most owners will require three or four each time they run it.

The cockpit is much better finished than the race car norm and the lack of a separate roll-cage does free up more space, but the view forward once you’re clamped into the only seat is still restricted by vast pillars. There is a rear camera system, but it isn’t working on this late-stage prototype.

All of the primary controls are integrated into the yoke-like steering wheel, which has a central display screen. Rotary switches on the wheel tweak various modes, from the level of power steering assistance to the differential pre-load (see Tester’s Note, above). Like the Super Trofeo racer, the SCV12 also has adjustable levels of both ABS and traction control. In addition, there is a variable power level labelled simply ‘mode’, with setting ‘1’ limiting the engine to around 650bhp and higher numbers releasing progressively more power until ‘5’ brings the full fury. It stays in ‘5’ throughout my time in the car.

Achieving a dignified start is hard. Whereas the Super Trofeo racer retains a clutch pedal for getting it rolling, the Essenza uses an automated clutch with the same gearbox for its three-pedal-averse clientele and it engages with a suddenness that turns even a gentle pit lane start into a tyre-chirping launch. There is also a pit lane speed restrictor, which noisily holds the car to 60kph (37mph) with a staccato spark-cut limiter.

Once on the track and fully unleashed, the performance feels huge but never savage. As with its lesser applications, the engine lacks the abrupt low-down torque common to turbocharged hypercars. Instead, the urge grows with linear progression throughout the broad rev range and with a spectacular exhaust note that is close to being painfully loud, even through the padding of a crash helmet. With the track surface at 50deg C, there’s little need to worry about warming the Pirelli slicks. 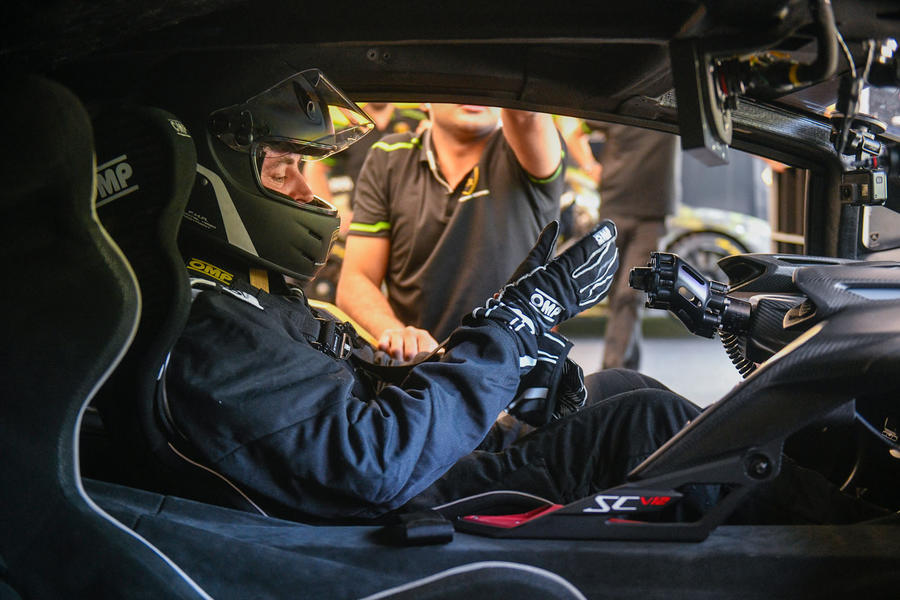 Grip is unsurprisingly massive on what are effectively full-race tyres, but it takes only a couple of corners to realise the Essenza lacks the shades-of-grey playfulness of those track-biased cars that still roll on road-legal rubber. In Vallelunga’s slower turns, it is possible to push to and through the limits of adhesion, with rear-end breakaway sudden enough to make the traction control a powerful ally. On the faster parts of the circuit, the huge aerodynamic downforce makes it feel pretty much unstickable. For many drivers, one of the bigger limits on driving time will be fading neck muscles under lateral load.

As with most slick-shod cars, the Essenza’s steering is very accurate but lacks much in the way of feedback, even with the variable assistance level turned right down. (The Super Trofeo’s felt very similar.) This prototype also has conventional steel brakes instead of the optional carbon-carbon discs.

On my first stint, they didn’t seem to be producing as much retardation as I was expecting in something so potent, but a post-drive briefing from five-time Le Mans winner Emanuele Pirro (who will be on hand at all of Lamborghini’s official customer driving days) reveals that I haven’t been pressing the pedal hard enough. Embarrassingly, the telemetry shows I’d generated a peak of only 72 bar line pressure and it takes over 100 to get the huge calipers biting as hard as they can. Pushing harder on my second stint shortens the stopping distances appropriately, but the pedal travel feels long under such use – and the extra effort is unwelcome in the sauna-like heat of the cabin.

At the end of the session, the overriding impression is that the Essenza is about as close as a car can be to a racer without actually spawning a competition variant, with Lamborghini saying there is no chance of the rumoured Le Mans hypercar spin-off.

In terms of raw performance, it sits atop the corporate tree, being faster even than the factory’s GT3 racer. Essenza buyers will be free to keep their cars wherever they want – although most will be using the special hangar built for them at Sant’Agata – and to take them to race tracks outside the official events programme. No more than 40 examples will be built and the first 10 have already been delivered.

If you’re in the market for one, just ensure you tick the box for air-con.