From £360,0008
Take the roof off an Aventador SVJ and what do you get? Arguably the most memorable supercar on sale
Open gallery
Close

Jota. At Lamborghini, the name carries a level of expectation. The SVJ Roadster – that's Super Veloce Jota – is therefore the ultimate expression of what an Lamborghini Aventador can be, not only from a coldly technical perspective but also from a place of flamboyance, high emotion and matt-bronze paint.

This makes for a strange, 217mph conflict of interests – one that also costs more than £400,000 after you’ve ticked the boxes for contrast stitching and some carbonfibre trim on the rocker cover and door mirrors. If you’ve not already suspended reality, do so now.

As a technical exercise, the Roadster presents as a Can-Am sportscar-esque road-racer whose aerodynamic sophistication extends to electronic actuators in the front splitter that channel air through vortex generators on the underbody. There is the same network of flaps found on the coupe; they can vector downforce to either side of the huge carbonfibre rear wing or stall it completely to counteract body roll or maximise straight-line speed respectively. You'd need a racetrack to prove it all works, so that's what Lambo did, setting a new Nürburgring lap record with the coupe. Prego.

The Roadster weighs only 50kg more than coupe, sacrifices just a tenth during the sub-3.0sec dash to 62mph and is largely identical in mechanical terms. The car’s pushrod dampers – stiffer than those of Lamborghini the SV Roadster – are situated in-board and control double-wishbone suspension that, via aluminium subframes, are mounted to a carbonfibre monocoque tub. At each corner there are then carbon-ceramic brake discs larger in diameter than the steering wheel (adorned with rally-style centre-marker) and the rear wheels swivel to help pivot the car or stabilise it, depending on cornering speed.

In terms of engineering, it means the SVJ is both old-world pure and cutting-edge complex, if you’re prepared to gloss over the thumping brutality of the single-clutch, automated-manual gearbox (something that's far harder to do once you've driven an 812 Superfast, or even the Huracan Performante).

And yet the emotional side is arguably more important, because how many of the 800 SVJ Roadsters that Lamborghini intends to build will ever see a racetrack? Very few, I’d wager. And how many owners will at some point remove the roof? All of them.

It consists of two six-kilogram targa-style panels made of carbonfibre. They’re lifted out, though not always as easily as you might expect, using quick-release levers behind the headrest and can be clamped in place in the front storage compartment, where they take up almost all the available space. You can also wind down the screen above the firewall to let in valvetrain chatter. 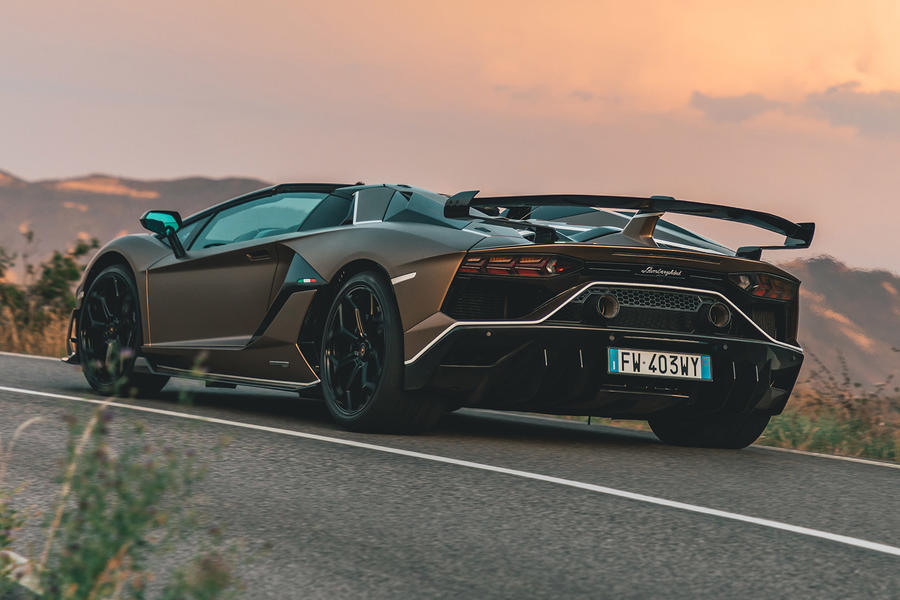 Every Aventador V12 since Lamborghini ’s flagship arrived in 2011 is special, but with its new titanium inlet valves the unit in the SVJ develops its peak 759bhp higher than any before it and also packs a broader spread of torque.

On paper it’s a masterpiece, and in the metal, something better still. Despite a new lightweight flywheel, throttle-response isn’t quite so breath-takingly immediate as that of its counterpart in the Ferrari 812 Superfast, built only a short drive away from Sant’Agata, but thereafter it pulls with a big-boned, gravelly richness that coalesces into a meteorite of power, high-pitched noise and general hysteria at the 8700rpm red line. In the coupe it sounds sensational, in the Roadster it’s an intravenous hit of excitement.

On the open roads south of the factory, getting to that point is worryingly easy. Thanks in part to rear tyres 355mm wide, the SVJ Roadster very rarely relinquishes traction, even when exiting tight second-gear corners. The steering is also accurate enough to place a body only fractionally narrower than that of the new Routemaster bus between the white lines with reasonable ease.

Perhaps most importantly when you’re dealing with this level of thrust, without turbochargers the delivery is almost perfectly linear, and the pick-up in the lower portion of the rev-range is never less than silkily smooth, so never at any point do you feel as though you’ve driven over a landmine. Despite the Roadster’s absurd dimensions, price and level of performance (at the top of second gear it'll dispatch 20mph increments in less than 1.5sec), you’re always in control.

Save for the sudden impacts of potholes and the like, in Strada mode the SVJ Roadster also cruises respectably well (with such as stiff structure, the spring rates, particularly at the light front axle, can be beautifully relaxed), but you’ll need the sharpened responses and firmer suspension of Corsa – and well-sighted corners – to move beyond this languid state and get anywhere near its dynamic potential.

Here the Lamborghini lacks the adjustability of top-end models from Ferrari, McLaren and Porsche, but has genuinely wonderful balance and grip enough for scything, manic cross-country speed. Which is, in the end, all you really need from an Aventador, because as ever with Lamborghini’s flagship, the technological prowess of its chassis is merely a platform for the emotion of its 6.5-litre V12 engine, and never has that been truer than for the SVJ shorn of its roof.

There's a bit more to it than that, actually. Big Lamborghinis are always defined by their crazy looks and crazy sounds but the Aventador, and especially the SVJ, is a pretty epic drivers' car. First there are things you need to get used to, though – some nice, some not.

Usefully, it's possible to bring the steering wheel way out towards your chest, but doing so creates the disconcerting sensation of vast distance between your palms and the front axle. You can almost feel the steering column sagging in the middle, though of course there's never anything to suggest this is the case. You'll find a good compromise eventually. There's also a considerable pedal offset, which is felt more keenly in our LHD test car because your resting foot is crimped inwards.

When you first climbed aboard (much, much easier when you can half drop yourself in through the open roof) you'll also have noticed the size of the front overhang. Your first few miles in this car will be characterised not by the twelve-cylinder engine or the demented level of attention the bodywork attracts from the general public, but by the acute paranoia of grazing the nose against something.

You never get truly get comfortable with a car like this. Instead of feeling indomitable, if anything the size and mind-blowing speed make the SVJ Roadster feel even more fragile than it really is. It's fantastically direct, though, and gives you confidence. The brake pedal also is a little softer than I'd like but it doesn't take long to work out how little you need to actually press on it.

As mentioned, the SVJ Roadster feels immune to understeer and neither will it oversteer on a dry road, but with even moderate loadings it works its suspension geometries so neatly and accurately. Come out of the throttle a touch mid-corner and the nose hulks inwards like a diving kite. Any corner, at any speed, and the chassis settles into a state where all four contact patches are putting in perfectly equal shifts. The steering is light and car feels poised and delicate and the speed – so much speed – simply comes.

Now overlay this with an open-air ambience, a rear-view mirror crammed full of the least apologetic aerofoil outside of Le Mans and the V12… 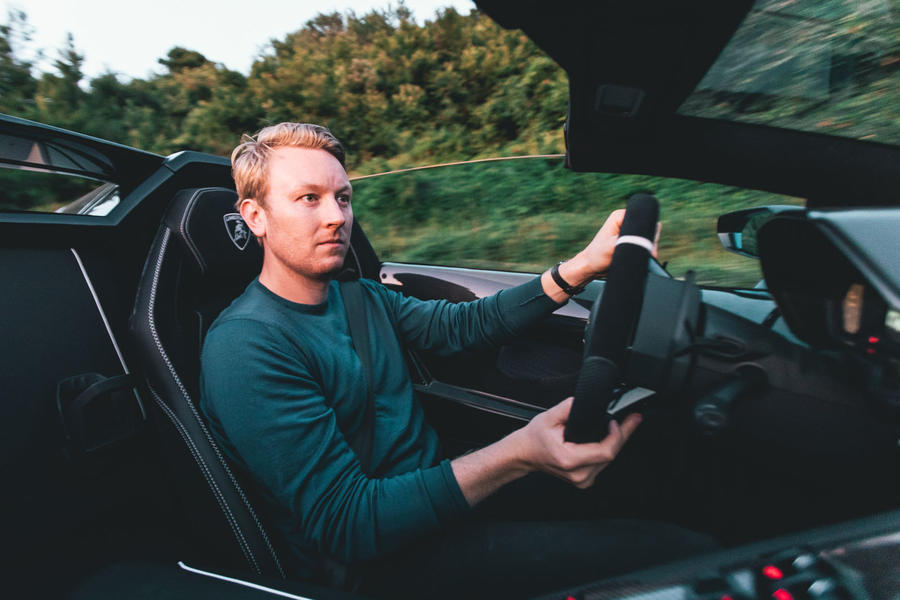 It's the last naturally aspirated V12 Lamborghini without electrical assistance – an already extreme machine developed to a more eccentric and bewildering climax. If your collection contains many supercars and totals millions of pounds, I’m therefore not sure why you wouldn’t want to add an SVJ Roadster. For petrolheads it's a landmark car in one of the most poignant ways imaginable.

But what about the person that has saved their whole life then re-mortgaged the house to own and drive just one incredible supercar? I don't know. Just how much drama do you want?

Ultimately the SVJ Roadster isn't perfect, but it's a blue-blooded mid-engined V12 monster so expolitable it isn't really a monster at all. Far from being a conflict of interests, it's a machine of remarkable duality and a spectacular sign-off for Lamborghini as we currently know it. 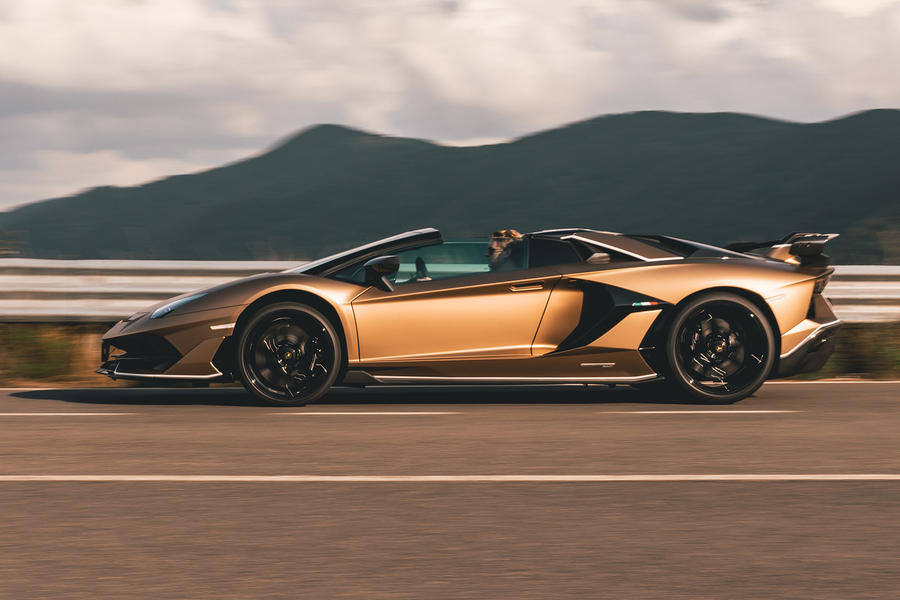 Oh! I wish I could win the Euro Lottery

The  Aventador is the best looking car of all and I  would settle for a coupe ,standard  model for under £300k. Must buy a ticket and dream.

The past is now

Lamborghini seems to have finally returned to its roots. I imagine many will disagree, but from recollection, Ferruccio approved the manufacture of the Muira to act as halo models to help with the sales of his other, front engined, products, namely the 400GT, Espada, Islero & Jarama. The Aventador, although in production for longer, now acts as a halo model for the Urus.

It stands out for outrageous design, a magnificent Engine, a V12 at that, nothing else with exception of a Gumpert comes close,it may not be the fastest, but on looks alone it’s a winner...!!