From £360,0008
Share review
When all around are going softer, the Lamborghini Aventador SVJ remains true to its V12 self, howling unfashionably into the future
Share
Open gallery
Close

As I write, a number of Lamborghini Aventador SVJs are belting down the main straight at Estoril race track, a few yards from me, and the noise is more race meeting than track day. That’s rare in the world of production cars, to the extent that there’s a ‘last of the interceptors’ feel about the Aventador, with its big mid-mounted naturally aspirated V12 and all of the promise and compromise such an engine brings.

Sure, Ferrari still makes a naturally aspirated V12, as will Aston Martin for a short while, but neither in quite the same setting as this. There’s a difference between a super-GT car and this, a super-sports car, a supercar of the original sense, partly figuratively, but also literally: an Aventador’s mid-mounted engine breathes through a much shorter exhaust than a front-engined GT, so its bark is louder. It’s a fact that means a car like this will never be ‘so what’.

It’s important to remember that, I think; whatever else you think about modern Lamborghinis and the way they’re used. Only 5% of Aventador buyers will regularly show their car a race track.

Pity. Because if owners did, they’d really feel how fast it was, rather than just know it set a 6min 44.97sec lap of the… well, you know where.

It does that by being more powerful, lighter, more aerodynamically clever, dynamically tweaked and having more grippy tyres than before. The full engineering gamut, then.

Let’s start with the engine. The 6.5-litre V12 has titanium inlet valves, a lighter flywheel, less internal friction, an 8700rpm limiter and now makes 759bhp at 8500rpm. More important, though, peak torque was at 5500rpm on the Aventador SV but then tailed away rapidly; the SVJ makes more torque through the entire rev range – before and including 5500rpm – but its 531lb ft peak doesn’t arrive until 6750rpm and its curve is flatter after that; so considerably more torque reaches the wheels all the time.

Those wheels are lighter, as are several other body components, so this (dry) is a 1525kg car, although given a fuelled Huracán Performante was 200kg more than its claimed dry weight when we put it on our scales last year, you can imagine where this will end up.

Chassis changes see springs unchanged but dampers and anti-roll bars stiffer, and the torque split typically 3% more biased to the rear; although it varies anyway. The front is disconnected entirely during braking, to mean the only steering wheel inputs are from braking, and there’s active rear-steer.

Then there’s the improved aero, which brings the SVJ 40% more downforce than an Aventador S but, significantly, is a second-generation ‘ALA’ (Aerodinamica Lamborghini Attiva 2.0), which can push turbulent air out beneath the rear spoiler, to stall it, reducing downforce and drag, and which it can split from left to right. In cornering, then, the SVJ will make more downforce on the inside of the bend, which keeps the body flatter and helps turn-in. Overall lateral g isn’t necessarily increased (you’d just put a massive wing on if you wanted to do that), but it apparently means less lock is required to get into a turn, and given less applied lock, more power can be applied, making corner exit quicker. I don’t think it makes a lot of difference to an overall lap time: between one and three seconds around a near seven-minute lap, according to an engineer.

Making a bigger difference is the option, for the first time, of race-derived Pirelli P Zero Trofeo tyres, rather than Corsas, as on other Aventadors. It’s the first time the Aventador has been offered on this rubber, which alone is worth around 10 seconds on a long lap. 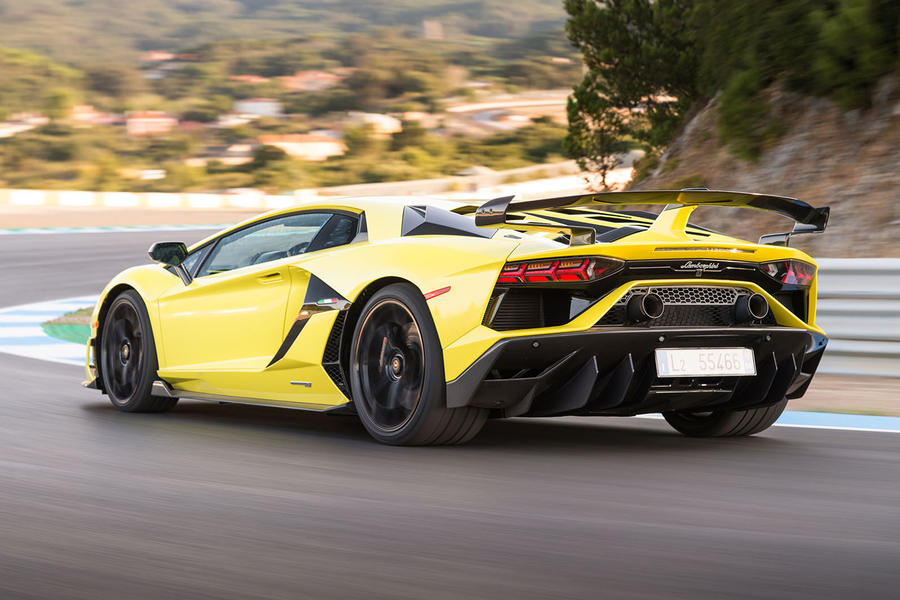 Would it surprise you to learn that the SVJ was extremely fast? Thought not. J is for article J in the old FIA documents that told car makers what they had to do to go sports car racing, and although the Aventador doesn’t race, there are slower cars that do.

Less focused-feeling ones too. The SVJ is fast in the old-fashioned, brutal way, in a straight line, at least. What might be the world’s greatest production engine is exceptionally urgent, and feels no slower to me than the crop of hypercars I’ve driven. Which, probably, is because it isn’t.

It’s mated to a single-clutch gearbox which is as terrible most of the time as you’ll expect, fudging through changes with an inordinate amount of head rock. But put the car into ‘Corsa’ mode, which also puts the dynamic steering into a constant rather than variable ratio – so is something you should absolutely do – and it just punches through shifts with a fairly satisfying venom.

Braking is excellent, in terms of strength. You’re aware of the car’s shimmies, though that might be down to the fact that you can feel them well, rather than that they’re more severe than in other cars. Plus there’s the fact that, at the end of Estoril’s main straight, you’re likely doing more than 170mph. From lower speeds, the SVJ pulls up brilliantly.

What it does from there, though, and into corner entry, can feel odd. It’s natural in a big car to ease off the brakes gently as you begin to turn – it keeps the car’s nose planted and reduces understeer. The rear-steer in the SVJ means you don’t need to do that. In fact, it almost guarantees that you’ll be winding off quite a lot of the lock that you’ve just applied. At nearly five metres long, the Aventador is a big car and Lamborghini figures you’ll want all the help you can get to make it feel agile. Job done, then, to that extent: it pays to brake only in a straight line, then turn delicately and let the rear-steer do the work.

That does mean there’s a slight dead spot on the way into a corner, a steady-throttle state before you line up the exit. Although given you’ll be going quite fast, it won’t last that long. And corner exit is, in ‘Corsa’ mode, pretty neutral, but leave the car in ‘Sport’ and it’s slower, and more rear-biased.

Small caveat about these impressions, by the way: Estoril was resurfaced about a fortnight before this was written and therefore about 25% more slippery than usual. Lamborghini says the handling balance would be largely unchanged, unless you tried to give it a ‘bung’ at low speeds, which would induce understeer here. Our test car ran Corsa tyres too – because Lamborghini didn’t know the low-grip, low-degredation surface was going to be laid when it performed its recce, and brought 240 sets of Corsas for the launch, expecting to get through a day per car. As it is, they still looked new after 20 laps. 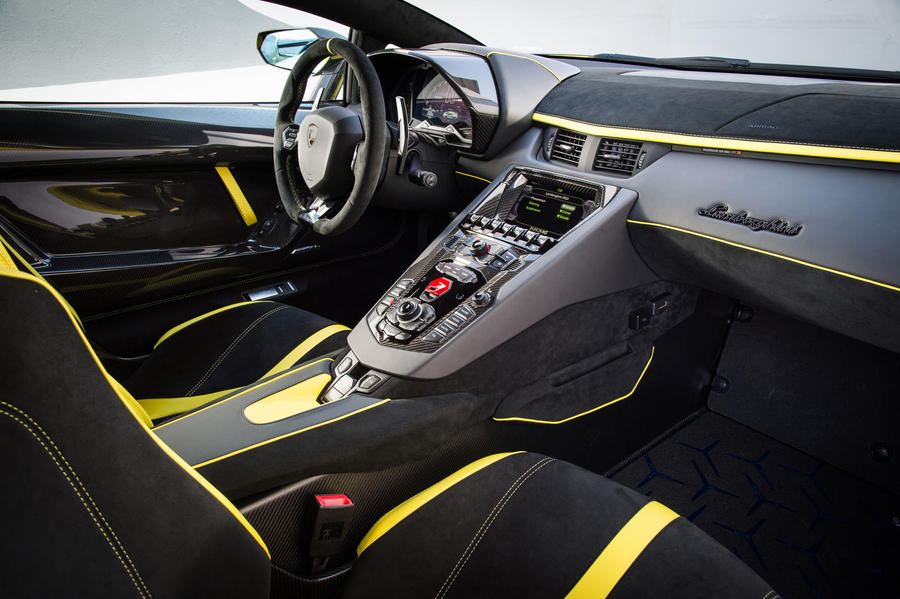 On a conventional circuit surface, then, and on Trofeo tyres, SVJ corner speeds would likely be astonishing, rather than just impressive. This is, clearly, in all-round capability as well as straight-line speed, a top-league supercar/hypercar.

Given that, given the interior is laden with carbonfibre, as is the construction, and given the level of aero and handling tech, that it arrives costing £360,000 looks almost sensibly priced compared with some cars with similar power outputs. Sure, the transmission is an antique and the engine doesn’t have any fancy hybridisation, but the V12’s simplicity is almost worth a premium for that reason alone.

I’d prefer it if getting the best out of the Aventador SVJ’s handling was a bit more conventional, if it gave you more options to drive your way, rather than its way, but the speed, the drama, the capability and the sound are like you simply won’t find elsewhere. And I can’t help but like that. 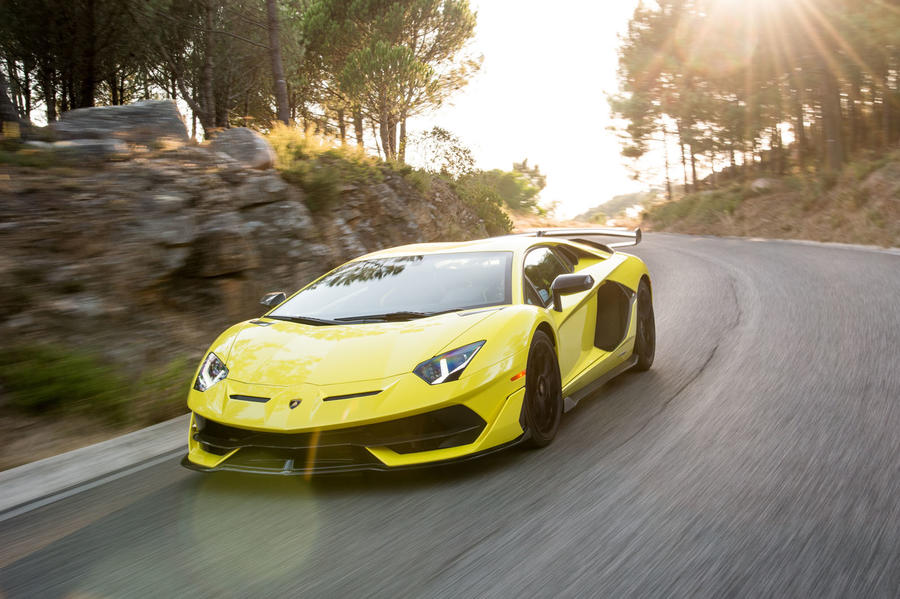 Almost perfect in all the

Almost perfect in all the respects that matter.

Except for that terrible gearbox.

looking a bit past it, but

looking a bit past it, but still an event to drive, i'm sure.

I'll take the Lambo's engine alone over any McLaren, every day, week and month, never mind its fabulous looks and drama.

It's just so much more desirable.