From £360,0008
Extra-special Aventador gets a V12 to die for, and ride and handling that’s just about good enough to bring it to bear
Open gallery
Close

The Lamborghini Aventador SVJ is the latest extra-hardcore version of the Italian outfit’s two-seater, V12, upper-level series-production supercar. Which, first and foremost, makes it a Lamborghini Aventador: a car which it’s impossible to drive along a UK motorway in any form without a procession of hot hatchbacks gathering in your wake, like pilot fish swimming behind a tiger shark. You can usually watch them ‘forming up’ in the rearview mirror before each paddles frantically past, only to subsequently slow down again for another pass.

Regrettably though, when you’re driving this new Aventador, that’s a pastime denied to you. The SVJ’s rear wing has a chunky central pillar not seen on other derivatives which, conspiring with the shape of the car’s new carbonfibre engine cover, can entirely conceal the outline of an rabidly driven VW Golf R, just about thirty yards off your bumper, in your review mirror. Thusly rear visibility in a supercar in which it was already pretty atrocious has become, in this its latest ‘ultimate’ version, even worse.

Would the safest thing for the Aventador SVJ’s driver therefore be to ensure you’re always the fastest-moving car on any given road, simply to avoid the risk of being approached from the rear by anything whatsoever? It’d be a bold excuse for a speeding ticket; you or I might think better of it. But, ‘for safety reasons’ or no, plenty of these cars will be driven exactly so, I reckon. At least, the ones that make it out of Knightsbridge and Monte Carlo might be. 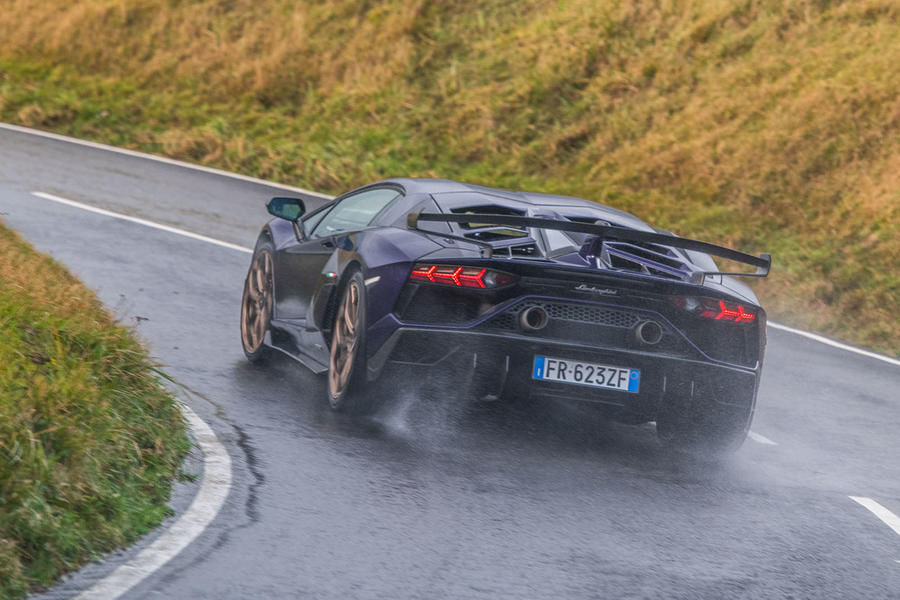 More power, more grip, more downforce, more carbonfibre; more of pretty much everything is what the SVJ gives you (except kilograms of kerbweight, since there are fifty fewer of those compared with a regular Aventador S). The keen-eyed might have noticed that the car’s top speed is 2mph lower than in a regular Aventador S. That seems a reasonable trade, however, for a body that develops 40 percent more downforce over each of its axles than even the old Aventador SV did.

Lamborghini’s 6.5-litre atmospheric V12 gets new induction and exhaust systems as well as titanium intake valves, and develops 759bhp and 531lb ft of torque. It’s now capable of revving to beyond 8500rpm on the one hand, and on the other makes a considerably greater spread of torque than it ever has before. For those reasons and more, it’s a quite staggeringly good engine – but we’ll get to that.

Meanwhile, the Aventador’s suspension has been reconfigured with stiffer anti-roll bars and uprated dampers versus the specification of the old Aventador SV. The car’s four-wheel drive system has been retuned for a greater rear-axle torque bias. A new pair of Pirelli P Zero tyres have been developed for the car (‘Corsa’ as standard-fit, super-sticky ‘Trofeo Rs’ as an option). And Lamborghini’s ‘ALA’ active aerodynamics technology has been applied – and to an Aventador for the first time.

How much of any of that will the typical SVJ owner be conscious of, do we think, during the decision-making process he might go through on route to a purchase? And how much of the car’s added performance might he ‘deploy’, we might cynically puzzle, on route from his expensive seven-star metropolitan summer residence to his equally metropolitan several-Michelin-starred lunch venue? Not much; but let’s not stoop to generalize too much. He’ll certainly notice the big Lambo’s aerodynamic makeover. The SVJ is a devilishly fast-looking car – and, to the Lamborghini faithful, that’ll undoubtedly be its biggest strength.

It’s important, however, to keep the memory of the car’s astonishing exterior fresh in your mind when getting acclimatized to the Aventador’s interior – because the car’s cabin remains tight, its driving position suspect and its seats oddly hard and slightly uncomfortable.

I’m 6ft 3in; not freakishly tall for a member of the human race these days, I like to think, but evidently so for an Aventador owner. Only by slouching and sitting bandy-kneed and bent-legged in this car can I keep my scalp off the headlining, in a position I can only comfortably maintain for about an hour. Some discomfort is worth tolerating, of course. But driving an SVJ on track and in a helmet would be so uncomfortable, for me, as to make it as good as impossible. But remember that exterior look? That profile, that windscreen angle, those incredible proportions? This is the price you pay. In a modern supercar niche that, by and large, now provides for taller drivers so much better than it once did, it’s a compromise that does make the Aventador seem regrettably old-fashioned.

And then, all of a sudden, it seems quite deliciously old-fashioned, as you explore the many sounds, vibrations and sensations created by a V12 sitting just a few inches behind your head. By jingo, it’s good. As razor-sharp in its responses as ever, but perceptibly more torquey and forceful-feeling through the middle of the rev range than any other V12 that Lamborghini has ever made.

The SVJ feels seriously quick well before you expect it to, from as little as 4000rpm. And from there on upwards, the thrill ride just gets louder, more rapid and more intense until you finally, inadvertently, blurt out your safe word.

On a damp, wintery day on a mix of dual carriageways and A- and B-roads, and with the car running on winter tyres that let it squirm with every high-rpm downshift and big stab of throttle, I don’t mind admitting that I wasn’t brave/daft enough to let the tacho needle rip beyond 7000rpm. Perhaps if I’d been shorter, I’d also have been braver.

Even with the best part of 2000rpm still to come, though, performance feels epic in just about every way: ridiculously fast, singularly dramatic, with a soundtrack that’s nothing short of spine-tingling. The SVJ’s V12 even sounds good on part-throttle at normal town speeds: not contrived, not enhanced, and not (like some) given to make up for a lack of character under load with engineered-in exhaust detonations on the overrun. Just absolutely spectacular in just about every conceivable way.

Like every Aventador to date, the SVJ is wide enough that, while it’s a less nervy steer amid roomier motorway markings, it fills a lane on a typical UK single carriageway road with very little breathing space to spare. It’s a supercar that depends upon good straight-line stability and uncharacteristically good ride composure, therefore, as well as steering that’s usefully precise, to be really enjoyed on the road.

And it’s got most, if not quite all, of what it needs in those respects. Damping that’s absorptive enough in the suspension’s softest setting. Steering that can seem changeable and unsettling at first, but that becomes more consistent if you use its fixed-ratio ‘Corsa’ program. A gearbox that can frustrate with its abrupt, intrusive, poorly timed changes in automatic mode, but that works better as a paddleshift manual. So, while it can be disappointing until you adapt to its quirks, the Aventador SVJ improves with use and familiarity. You learn to decode it.

On the aforementioned winter tyres, the car’s handling balance is good, too. Throw it hard and fast enough at a tighter corner or roundabout and you’ll feel a touch of steady-state understeer once you’re beyond the initial, four-wheel-steering-enhanced turn-in phase. Not nearly enough to affect your enjoyment of the driving experience, though, which is as agile and incisive as you’d want it to be.

Track impressions will have to wait for warmer ambient temperatures, proper performance tyres, and a track to happen, of course. On this evidence, there’s no reason to suggest this car would be anything less than brilliant on a wide circuit, on a warm set of Trofeo R tyres; though we’ll have to wait and see exactly how brilliant. 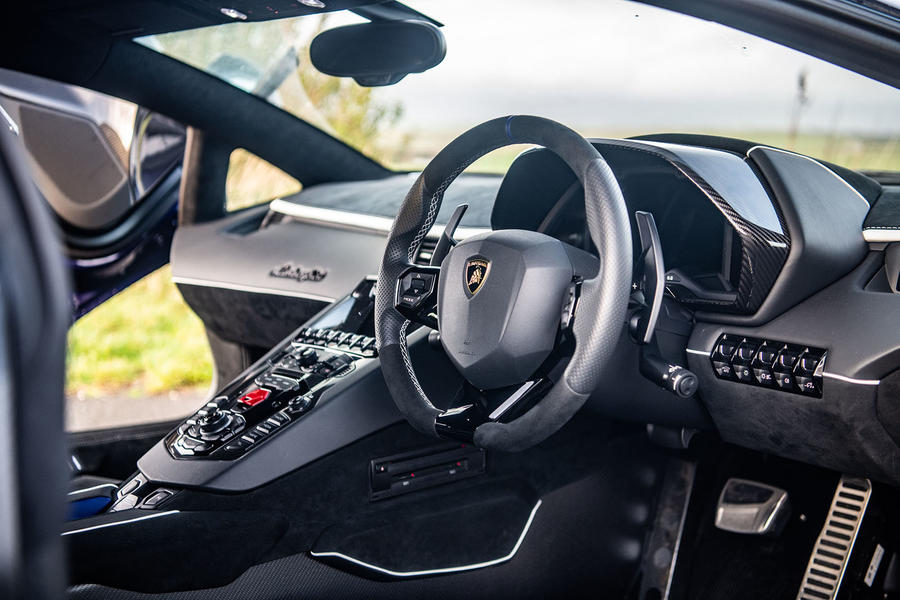 Nine-hundred will be made – and at the time these words were written, not quite all had been sold. So you certainly still can if you want to.

And there are sentimental reasons that might motivate you as well as the usual irrational ones. The ‘J’ in SVJ stands for ‘Jota’ – and it’s an initial that’ll mean a great deal to Lamborghini devotees. Legendary test driver Bob Wallace made the company’s very first ‘Jota’, a 1970s Miura prototype that was intended as a motorsport homologation template but which burnt to the ground after crash before it could fulfill that mission. There have been ‘Jotas’ since, but very few: and never one based on a Countach, Murcielago, Gallardo or Huracan. They don’t come along often.

Need another excuse? Lamborghini says this will be the maddest and most powerful that its ‘L539’ atmospheric 6.5-litre V12 will ever get before the company starts hooking up electric motors to it for the upcoming Aventador replacement. If you like your supercars straightforward, direct and uncomplicated, then, you might feel that now’s the time to bag one and preserve it for posterity (while also driving the wheels off it on a regular basis, we’d very much hope). It’d be the responsible thing to do.

And if this really is the last in a line of old-school V12 Lambos before Sant’Agata branches out into plug-in hybrid electrification? Well, it’s not the most usable, drivable or dynamically sophisticated car of its kind, but a big, burly, brutal supercar that you need to get to know before you’ll trust it or really enjoy it.

Like so many cars of its particular line, it’s a car whose engine can produce every bit as much savagery and speed as its chassis can harness – and then some. But as a love letter to one of supercardom’s most wonderfully bombastic atmospheric engines, it could hardly be better. 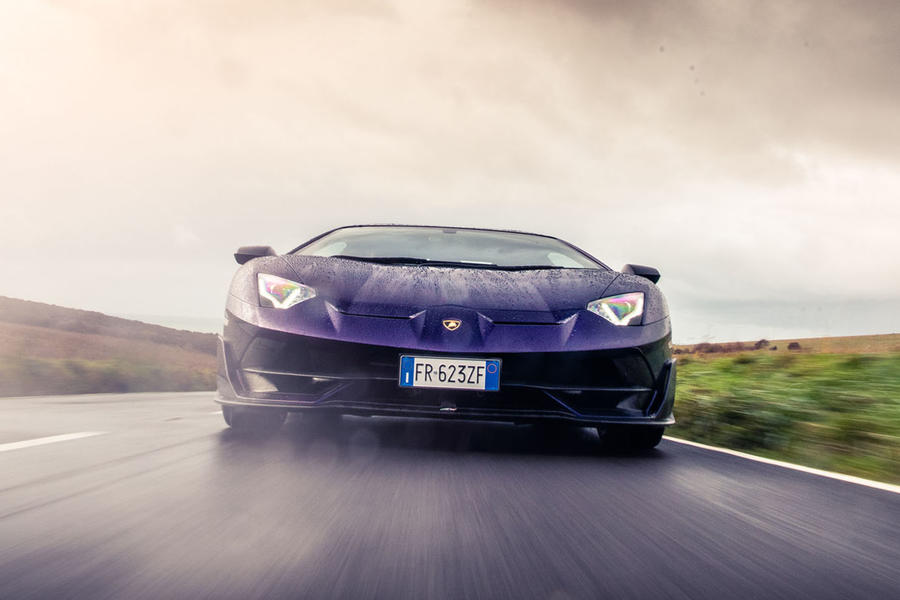 If ever a more pointless car had or has been created I've yet to see it.

You think the stardard

You think the stardard Aventador has more point? Or the Murcielago, Diablo, Countach and incredibly useful Miura?
275not599 22 December 2018

If ever a more pointless car had or has been created I've yet to see it.

This car is not about points in the usual sense. It's about the enjoyment of driving it. Enjoying the noise and the feel of its v12. Enjoying the throttle response and the feeling of its steering. Loving the drama and character of its amazing looks, its sharp handling, cornering etc etc. If you don't get these things, then I guess you would call it pointless.

....which is where most of these things seem to end up.

Most don't end up in hedges,

plus a decent engine .makes Ferrari look so boring i.m.h.o.