6
Share review
Plug-in hybrid Renegade is certainly pricey, and not so polished or rewarding to drive on the open road, but might make up for it in other ways
Share
Open gallery
Close

This is Jeep’s first plug-in hybrid. And, much as traditionalists might argue that plug-in hybrid power has about as much of a place in a Jeep as a rudder does on a writing desk, we can all appreciate why it exists.

Jeep’s European sales have hit triple-digit percentage growth several times over the past 10 years; but now, if it wants to maintain that growth and consolidate its position on our side of the pond, it must at once drive the carbon emissions of its fleet of new cars down - and quickly - while driving its penetration of the fleet car market up.

With the emissions testing regime and regional car taxation rules both set as they are, plug-in hybrid Jeeps are the way to do both; and there will be a PHEV version of both the Compass and, yes, even the Wrangler in the not-too-distant future.

It does seem particularly strange to use the same old themes to try to distinguish these cars that Jeep has always relied on; but what else can they do? You know the ones: lifestyle-enabling freedom from the normal bounds of car ownership, and the peerless off-road ability to escape from the ordinary. I can see how that stuff might sell a Wrangler to a private buyer.

But when you’re after a fleet customer whose other options are a Vauxhall Grandland X and a Ford Kuga, who’s mainly going to be driving to meetings rather than up mountains, does it really work? I mean, isn’t the idea that you might go weekend adventuring in your company car, like they do in those Jeep brochures, just a tiny bit ridiculous?

You might a bit; or you might just like the idea of it. But it’d certainly be an awkward Sunday-evening phone call to the boss, I dare say. “What’s that, Perkins? Your company car has just been dragged out by the tide into the Severn Estuary? Didn’t you roll the last one down the side of Scafell Pike? How funny. Yes, of course you’re fired. Good luck getting home.”

You might well point out, and quite reasonably, that selling an electrified Renegade in such a way is no more laughable than the way any other Renegade has been sold; or how so many other cars have been idealised in glossy promotional material for eons. And Jeep would reply that Renegade owners really do take their cars off road, of course. But somehow I doubt very many of them really do.

This car will certainly have to appeal to private buyers as well as company car drivers in order to have the kind of impact on its fleet CO2 emissions that Jeep is hoping for. It’s pricey, as PHEVs tend to be. The Renegade 4xe (they pronounce it ‘four-by-eee’ if you’re keen to impress the local dealer) starts at a good 40% premium above the entry-level Renegade, although the sub-50g/km carbon emissions of Jeep’s lesser-two-of-three-trim-level versions should make that £30,000-plus price less of a hurdle for fleet users.

We’ve driven the less powerful 188bhp version in Italy already; this is our chance to try the range-topping 237bhp Trailhawk model on UK roads - and off them. Both use the combination of a front-mounted, 1.3-litre turbocharged petrol engine and a 60bhp ‘electric rear axle’, however - the Trailhawk getting a dose of extra ground clearance, better off-road clearance angles, some underbody skid plates and a set of Goodyear ‘mud and sand’ off-road tyres for its 17in alloy wheels. 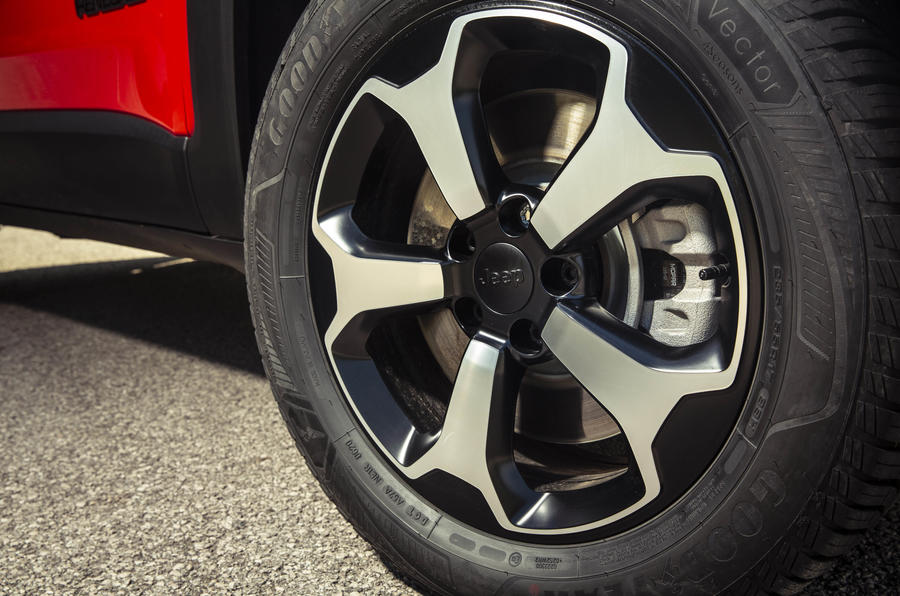 The Renegade was already the kind of car you have to be at least a little bit irrationally attracted to in order to justify owning one, and that’s all the truer when you stick a £36,000 price tag on one. It’s a chirpy, cheery, bold-looking car that you might very well develop an affection for. But out in the real world, it doesn’t really bear flattering comparison with the much more practical and quite plainly better-built and better-appointed SUVs that you might choose to spend your own money on.

The back seats are only just about passable for adult-sized occupant space, and smaller even than you’d find in a pretty ordinary mid-sized crossover hatchback. Its boot is also small by compact SUV class standards; and smaller still in the case of the 4xe, which loses volume in order to allow space for the car’s 12V battery. Even if you’re only shopping among PHEV rivals, you quickly become aware that you could get into some significantly more useful, versatile alternatives for the money.

There are also plenty of ‘nicer cars’ you could otherwise have, although that’s a compromise Jeep owners might at least be more used to making. The Renegade’s rather monotone, materially plain cabin ambience hits notable low points for perceived quality with the nasty, shiny plastics of its steering column, and in one or two other less instantly visible areas too. The front seats of our Trailhawk-spec car were slightly flat and wanted for a bit of lateral support, although they were comfy enough over the trip of a couple of hours.

The car’s controls do at least make operating what is a fairly complex vehicle fairly simple. The Renegade 4xe defaults to its ‘hybrid’ running mode on start-up, which looks primarily to the electric drive motor for power in and around town while there is charge in the 11.4kWh battery. Ask to go quicker than about half-throttle and the combustion engine will fire up and chip in. It has Battery Save and Battery Charge running modes, too, as well as an Electric one.

Use Hybrid and you’ll find the piston engine starts and stops fairly smoothly, but it very quickly becomes quite loud and buzzy if asked to work hard. Since the electric half of the car’s powertrain seems to be geared quite short (presumably so that it can make the greatest contribution to the car’s off-road capability), you’ll find you don’t have to go much beyond 30mph to be rousing the petrol engine fairly regularly if you want to make quicker progress. This will be a bit of a turn-off for those who like the idea of running a PHEV as efficiently as possible, I’d guess. For interested drivers, meanwhile, the way the hybrid system seems constantly to be starting and then shutting off the engine, and shifting gears also, undoubtedly makes it seem a bit flustered and hyperactive, and it certainly presents some drivability issues.

You can, thankfully, choose to drive the car in Sport driving mode, keeping the piston engine running almost continuously and cutting down on the amount of reaction time the Renegade seems to need before responding to bigger throttle inputs. It feels passably brisk driven this way, but very rarely as urgent as you might hope the most powerful Renegade in the range would feel. The piston engine is noisy and boorish when revving; there’s often a bit of light clunking and shunting about the transmission as it engages and changes gear; and while the car feels brisk enough when accelerating from a standstill, it becomes a pretty unremarkable performer on the road at greater speeds.

The ride admits some Tarmac surface noise on those standard ‘M+S’ tyres, but it’s fairly supple and absorbent, and makes for broadly comfortable transport at low speeds. Particularly light and slightly pendulous, over-assisted steering gets in the way of any particular enjoyment of the car’s handling, where body control can be found a bit wanting both over bumps and around bends both tight and fast. And just as the car’s steering feels over-assisted, so too does its brake pedal - so much so that it can make stopping the car without a little jerk or a pitch something of a challenge.

But if the Renegade makes up for its dynamic quirks anywhere, it does so first and foremost off road. It offers specific terrain-selectable drivetrain control modes for snow, mud and sand and for rock-crawling, as well as particular 4WD Lock and 4WD Low modes that retune the car’s inter-axle torque distribution and throttle sensitivity for particularly tough going.

I tested it on some rutted, muddy forest tracks, finding the limit of its ground clearance (201mm) only once - and very briefly. Low-speed control under power was never tricky to maintain, but I’d have liked finer and more progressive control under braking.

No doubt more relevantly for the majority of Renegade owners, the car also has a certain appeal as a nippy short-range urban EV. The gearing of that electric rear axle makes it quite a lot brisker to 30mph than you might expect of something with a modest-sounding 60-horsepower motor, and our testing suggested that Jeep’s 27-mile electric range claim shouldn’t be too hard to reproduce in the real world. 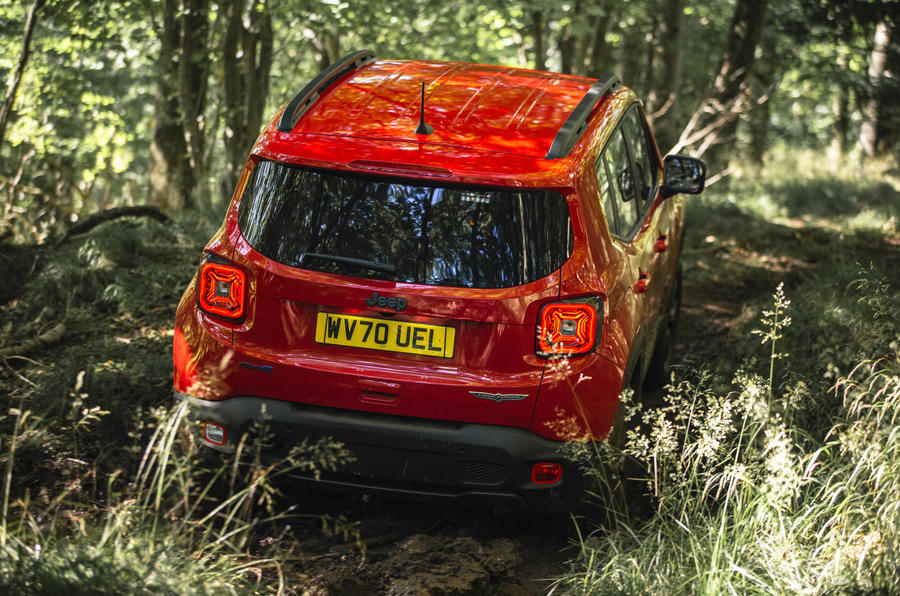 The Jeep Renegade 4xe might be one of the more likeable plug-in hybrid options on the fast-developing compact SUV scene, but it certainly drives like what it is: Jeep’s very first effort at handling the complexity of a PHEV driving experience, and making it work in a car with some off-roading credibility as well as good on-road performance and drivability.

It is not a triumph - although, if you’re predisposed to it and you have a use for its 4x4 capability, it needn’t strike you as a particular failure either. It’s small but surprisingly tough; comfy and pleasant enough around town, but strained and a bit underwhelming out of it; disappointing for space and material quality, but neither so beyond the bounds of daily usability if you were minded to indulge it.

For the price, it really ought to be better in a number of ways - but judged against its PHEV peers, perhaps it has the charm to do well in any case. 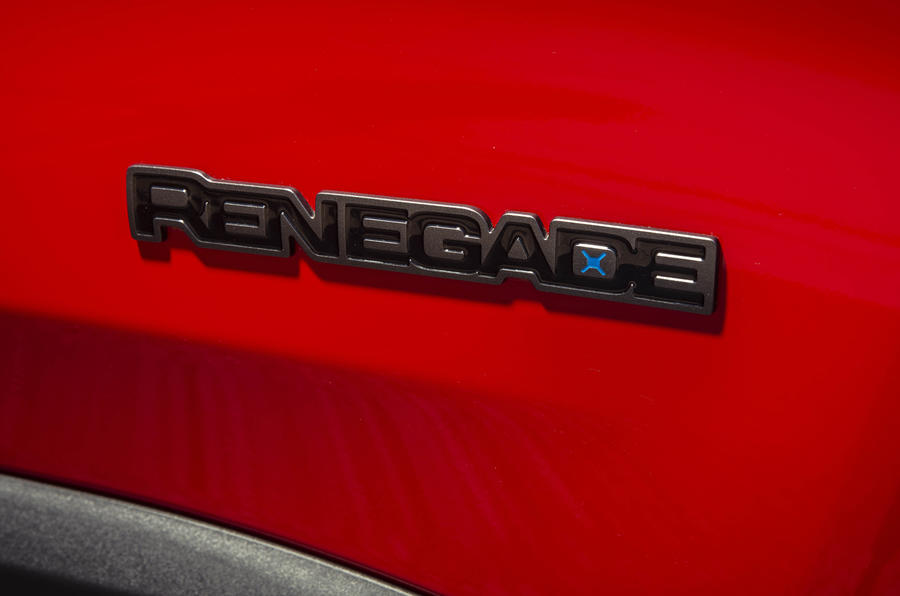 But of course the owners take

But of course the owners take their Jeeps off road. Your local retail park or supermarket parking area is not the public highway is it? I once saw one of these venture across a kerb at a junction and could only admire the adventurous spirit of the driver.

30k for this? Make mine a Doscovery Sport or a RangE Rover Evoque

Ignore this top spec and get

30 September 2020
Ignore this top spec and get a lower spec model for closer to £30k and it may seem more competitive against other phevs, all phevs are too expensive to be fair but this SUV is at least a capable mud plugger and to my eyes looks good so if I could afford a phev and wanted an SUV, this would be on my list to try.