The Jeep Compass is yet another entrant into a crossover market segment that now contains enough distinct models and derivatives to stretch twice around the globe if you laid them all bumper to bumper. Perhaps.

It’s about time Jeep squared up to the likes of (deep breath) the Ford Kuga, Kia Sportage, Nissan Qashqai, Peugeot 3008, Renault Kadjar, Seat Ateca, Skoda Karoq, Vauxhall Grandland X, Volkswagen Tiguan and so on. Indeed, for a vehicle manufacturer that pioneered the rugged, go-anywhere ethos of what would become the lucrative sports utility vehicle market sector, it has taken an unfeasibly long time to come up with a truly credible competitor in the compact-SUV market sector.

It’s true that a Compass model existed in a previous life, but it was a clunker of the highest order and Jeep didn’t as much withdraw it from sale in 2015 as put both it and the car-buying public out of their respective miseries.

In Jeep’s defence, its focus until now has been on either renewing or introducing models either smaller (in the shape of the funky Renegade) and bigger (the Cherokee and Grand Cherokee) than the Compass, and the manufacturer’s growing sales around the globe prove that strategy to be quite a shrewd one.

However, with this segment still growing quickly - Jeep estimates that it will account for two million sales across Europe alone by 2020, up from 1.6m in 2016 - it was essential that this Qashqai-sized hole in Jeep product portfolio was filled.

There’s a confident swagger about Jeep as a brand, then, and this Compass attempts to marry the somewhat contrasting aims of being a hard-wearing, rugged, all-terrain 4x4 and a stylish, comfortable mode of family transport. Jeep says it wants to position its cars at the ‘authentic off-road capability’ end of this spectrum. As such, it has engineered the Compass with a ‘Chapman strut’ rear suspension because it says this arrangement provides much better wheel articulation than a twist beam and, in theory, should give it more ability in the rough than its competitors.

Other the other hand, this Compass can be specified with snazzy 19in alloys that look eminently scratchable should you venture up a green lane, and a swish two-tone black and light grey interior that doesn’t look like it could withstand being clagged with mud after a hard day on the trails. The Compass does, however, have towing ability if you specify a £650 Towing Pack, and driver assistance features such as hill descent control that are usefully utilitarian.

Jeep’s quest for go-anywhere versatility also means four-wheel drive features heavily across the Compass’s model range, although some front-wheel-drive variants are offered. The four-wheel-drive system, sourced from GKN and also used on the Renegade and Fiat 500X, is one of those clever types that sends all the power to the front wheels when grip levels are consistent and brings the rear axle into play when necessary, and does so quicker than you can even begin to utter the words, “What patch of ice?” - 300 milliseconds to be precise.

You can lock the Compass in four-wheel-drive at the push of a button if you choose, and also a 'Selec-Terrain' driving mode rotary dial with four custom modes: Auto, Sand, Snow and Mud. Our test on dry roads was conducted almost exclusively in Auto mode.

We’ve detailed the various trim levels available here, and we assessed the lower-powered diesel variant of the Compass in Portugal in the summer, so here we try the more powerful oilburner in Limited specification, which at launch is the top specification. The first right-hand-drive examples will arrive in dealerships in February 2018. 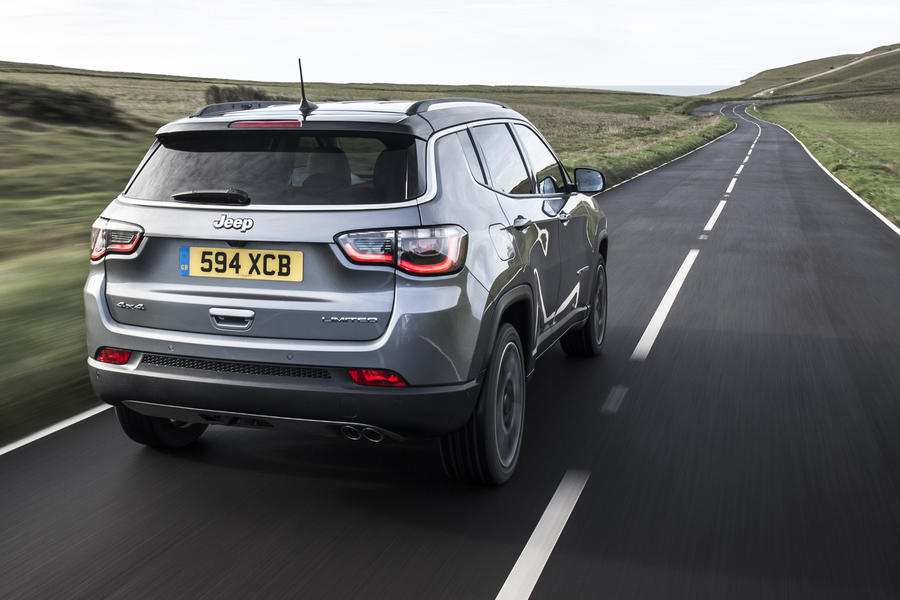 Those expecting a vivid reinterpretation of the funky Renegade might be disappointed upon first sight of the Compass. In the way that the eye-catching (but divisive) styling of the Nissan Juke contrasts with the rather more staid Qashqai, so the Compass’s looks are rather more reserved than its little brother’s.

Under the skin, however, there are similarities. Both vehicles are based upon Jeep’s ‘small-wide architecture’, extended for use in the Compass to give an overall vehicle length of 4394mm and a wheelbase of 2636mm.

The Compass’s bluff front end and the manner in which the falling roofline meets the tapering glasshouse at the rear seem a little bit Evoque-y (Evoqative?) to our eyes. However, the seven-bar grille, squared-off wheel arches and a broad stance make give the Compass a rather butch appearance.

We’re less convinced by the brightwork that runs along the top of the windows into the tailgate on our Limited-spec model, or the wide C-pillars that serve little purpose except to reduce rear visibility for the driver, but it’s certainly sharply dressed enough to fit in with its European rivals on the school run or the weekend trip to Centre Parcs.

In the cabin there’s plenty of space, particularly in terms of headroom. The driving position is fine, with good seat and steering adjustability and it doesn’t feel cramped in here at all. Inside, the Compass feels in the middle of the pack in all respects, as a seats-up luggage capacity of 438 litres attests - that capacity isn’t close to the best in class, but it is far from the worst either.

The latest iteration of Jeep’s Uconnect infotainment system takes centre stage on the dashboard. It’s the first of the brand’s cars to get the fourth-generation system and on high-spec cars such as this Limited variant you get an 8.4in touchscreen, which responded swiftly to pushes, prods and ‘pinch and zoom’ commands. The presentation of the satnav maps is fairly simple, which is actually no bad thing when it comes to legibility while on the move. The virtual buttons for the main commands at the base of the screen could be a bit larger for this very reason, though.

Mind you, rather than sweep all the switchgear on to the touchscreen and go for the minimalist cabin look that’s all the rage, though, Jeep has retained plenty of those old-fangled buttons and switches for the key controls, which we don’t mind one bit.

What’s less enthralling is the layout of the switchgear on the lower section of the centre console. When you’re focused on the road ahead, it isn’t particularly easy to intuitively reach down to adjust the heating fans, because there are a lot of switches and dials gathered there in a not-altogether sensible order.

The Uconnect system can be hooked up to your smartphone via Apple CarPlay or Android Auto. But while the USB connectivity port is in a prominent position in front of the gear lever, there isn’t an obvious space adjacent to it in which to place your smartphone, raising the prospect of having trailing wires cluttering the cabin, unless you have one of those aftermarket ’phone plinths favoured by travelling salesmen and minicab drivers.

This most powerful diesel iteration of the Compass produces 168bhp and 280b ft, sending that power to the all four wheels (when required) via a nine-speed automatic transmission. Jeep claims a kerb weight of 1540kg for the Compass, but this derivative, with its diesel engine and that four-wheel drive system, feels more sluggish than its claimed 9.5sec time for the 0-62mph sprint when you accelerate away from a standstill.

The nine-speed automatic gearbox, developed in conjunction with ZF, works well on the whole, although if it is called upon to make quick downshifts it can feel a little jerky. There are no steering-wheel mounted paddles should you wish to change gear yourself, although you can knock the gear shifter to the left and use it. On two isolated occasions during our test drive the ’box went hunting for a gear unexpectedly, while being driven on a steady throttle.

As is typical of this breed, there’s not a lot of dynamic entertainment to be found here, but the Compass corners fairly well and feels commendably broad-shouldered and solid. This is emphasised by a steering weight which is noticeably heavier than many other crossovers, and especially by the wheel itself, which feels thick in your hands.

Neither aspect does anything to enhance the level of feedback for the driver, but we suspect most prospective buyers would be happy to sacrifice that for the sensation of solidity that runs through the vehicle. Indeed, Jeep emphasises the Compass’s solidity by highlighting its admirable five-star performance in the latest (and most stringent) Euro NCAP crash safety tests.

The Limited specification models come with 18in alloys as standard, but our test car was fitted with optional 19in wheels, which cost £700. The ride was fairly supple on A-roads and dual carriageways, but there was noticeable patter over uneven country lanes and a degree of all-round road noise that we doubt the smaller wheels generate. 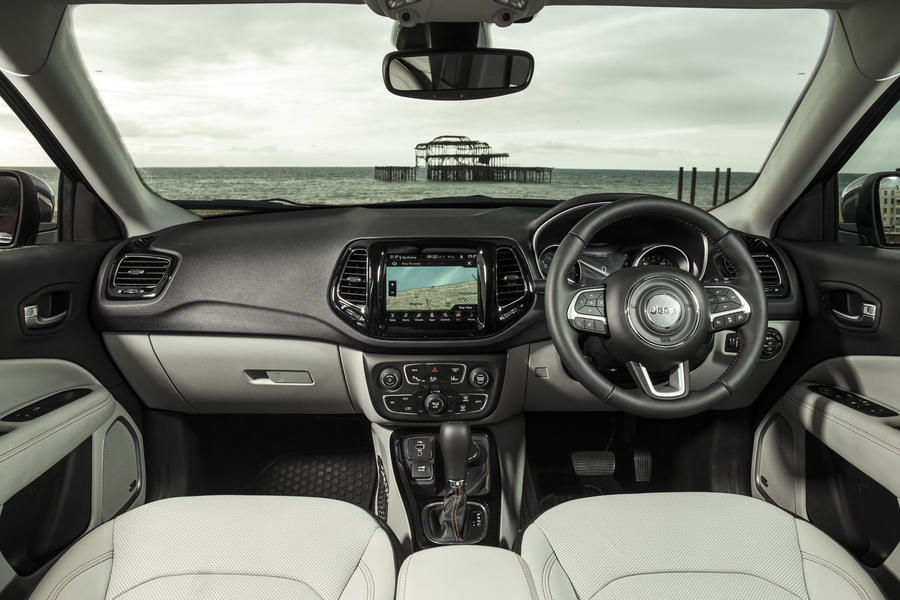 The main positives are that the Compass feels solid, dependable and is moderately successful in its bid to meld its makers’ trademark rugged vibe and abilities with a stylish, contemporary design and sufficient technology to match its rivals’ offerings.

On the downside, this model’s performance feels a little underwhelming, the diesel engine makes for a rather gruff and occasionally unrefined companion and it is tough to make a case for it standing out in a crowded and very talented field in any one specific area. It’s more expensive, less powerful and less frugal than the top diesel-powered, four-wheel-drive Seat Ateca, to name just one compelling rival in the category.

Our suspicion, however, is that a sweeter Compass lies elsewhere in the model line-up than this rather expensive bells-and-whistles variant. We didn’t get to try a front-wheel-drive Jeep, but we did briefly sample a four-wheel drive, 168bhp petrol variant, which felt more peppy and lively than this diesel.

For UK buyers, it could well be the case that a cheaper, lighter, petrol-driven Compass might represent a better choice if you intend to drive predominantly on the road. For those who demand off-road capability come what may, a more rugged Compass Trailhawk equipped with a low-range transmission is due next summer. 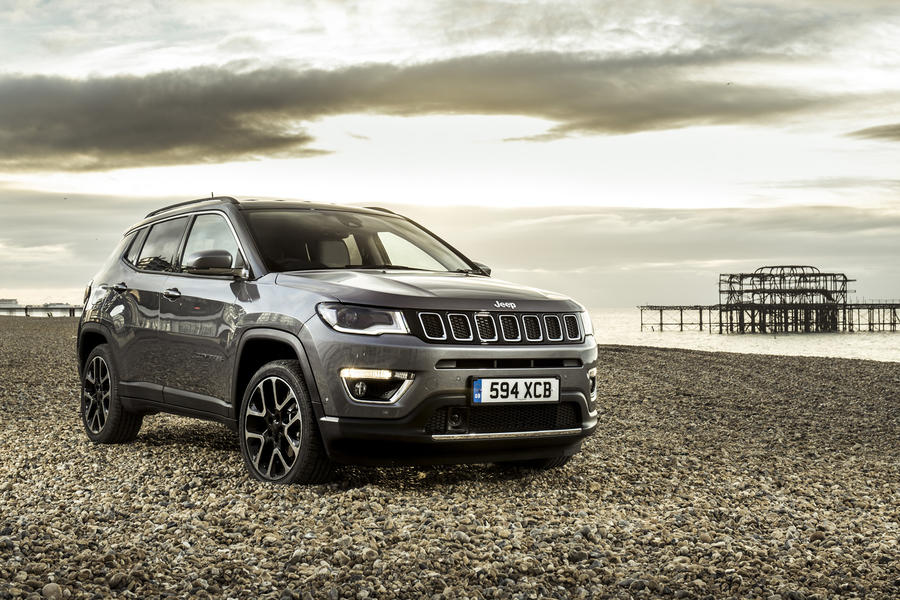 this thread is missing something..,hmm let me see..

I think you're missing something

The main positives are that the Compass feels solid, dependable

Feels "dependable"? What does that mean?

Not to mention this is the brand that consistently shows some of the worst dependability results in independent studies.

Eh up poopy, not seen you around ere for some time.

Is it a bug in autocad software?