From £32,5908
New interior raises the XF’s game, which handles as well as ever and now seems the bargain of the class
Open gallery
Close

There are two contradictory sides to the story of Jaguar’s modern mid-sized saloon, and depending on who is talking, you tend to hear about only one of them.

One side is that of arguably the finest driving machine in the senior premium-saloon clique (excluding wares by M, AMG, et al), and an unusually elegant and charismatic one at that. The other strand tells the tale of an ageing bit-part player with uninspiring engine options and an amazingly sketchy business case.

Talk to road testers and they’ll tell you the Mk2 Jaguar XF’s chassis balance, steering and handling have always had the measure of its German opposite numbers. Consult the news desk and you’d learn that in 2019 just 15,600 examples found homes globally while, during the same period, BMW sold 89,300 examples of the 5 Series in Europe alone.

Unsurprising, then, that the XF is now on wafer-thin ice, no matter how dependably enjoyable it is to drive. One decision that recently recruited Jaguar Land Rover CEO Thierry Bolloré will have to make is whether to cull the range entirely. Word is that both the XF and its Jaguar XE understudy could be mothballed by 2025 to make way for a svelte new hatchback, possibly an electric one.

However, we’re not quite yet at that stage and fans of the XF can take heart from the fact that Jaguar has recently revitalised the model for a second time since it arrived in 2015. The big news is the almost entirely new interior, which will be shared with the updated F-Pace SUV and should to some extent address a major modern Jaguar failing in comparison to rapidly advancing rivals. Admittedly, the Germans are still far from perfect when it comes to cabins, and Audi’s almost zero-sum pursuit of touch-sensitive user interfaces is obviously misguided.

But the Jag’s disadvantage here has often run deeper than its deficit of slick technology. In recent years, perceived quality has also been lower than the class average and the XF’s reconceived interior promises to turn that ship around with its ‘contemporary, calming’ atmosphere. The other development is the simplification of the engine line-up and the adoption of mild-hybrid technology, albeit for only the sole four-cylinder 2.0-litre turbo diesel offering. Power for the D200 unit duly rises from 177bhp to 201bhp while claimed fuel economy also rises, from 50.9mpg to 57.2mpg.

Six-cylinder engines were consigned to XF history in 2018, so the only other powerplant is Jaguar’s 2.0-litre four-cylinder Ingenium petrol, which is tuned to either 247bhp in the P250 or 296bhp in the P300 – both figures unchanged from before. 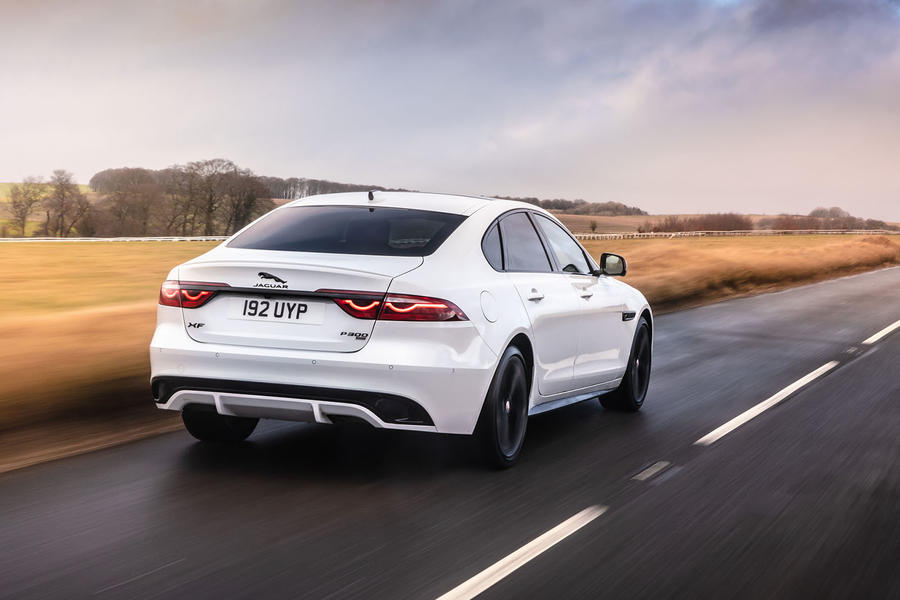 Despite the changes, up close and in the metal you might still struggle to identify an updated XF. The air intakes are bulkier, the headlights have been slimmed down, and there are some more aggressive styling cues in the rear bumper, but that’s about it. However, slide aboard and Jag’s mid-ranking saloon feels like a different world from before.

At 11.4in, the new tablet-like touchscreen that hovers just off the surface of the dashboard proper is hardly subtle, but it sits so neatly alongside the redesigned centre console that it doesn’t feel at all overbearing. That centre console is also sharper to the eye, even if Jaguar has wisely retained physical controls for the climate settings and volume. The steering wheel is the same rakish one found in the Jaguar I-Pace EV and in general the new XF adopts the same expansive, uncluttered but materially rich ambience found in the best car Jaguar currently makes. What an improvement.

I suspect this cockpit will prove quite hue dependent, but our lightly upholstered test car, with its panoramic roof, was decadently easy company on a motorway stint.

The sharp-graphicked new Pivi Pro infotainment system is also a vast improvement on its predecessor and, among premium alternatives, is bettered noticeably by only BMW’s formidably slick iDrive system.

As for the driving experience, the XF remains as engaging as ever. The steering response is delicate and crisp for a big beast, and the rack pinpoint accurate. This is still the finest helm in the class. The updated XF also continues to demonstrate that trait familiar to everything so far built on the aluminium D7 platform: an excellent long-wave gait on straighter sections of road but deftly controlled body movements during cornering. It could be even better, too. I’d be quite surprised if the rear-drive P250 didn’t handle even more sweetly than our sometimes-too-neutral P300, and the smaller 19in wheels temper the faint fidget induced by rougher surfaces.

Alas, no matter how fine the ride and handling, it’s hard not to pine for Coventry’s answer to the silky straight-six engines Mercedes and BMW offer. Especially in what is supposed to be the most serious car in the range, and when such an engine is still offered by Jaguar sibling Range Rover. The P300’s 296bhp four-pot is strong enough once it gets going, but it’s also light on character and the heavy reliance on forced induction means there is some lag.

And while this motor works well in the smaller F-Type, against the XF’s optimistic-sounding 1744kg it never spins out as freely as you’d like it to. Neither is the ZF gearbox particularly clinical, although the gear selection calibration itself is well judged. 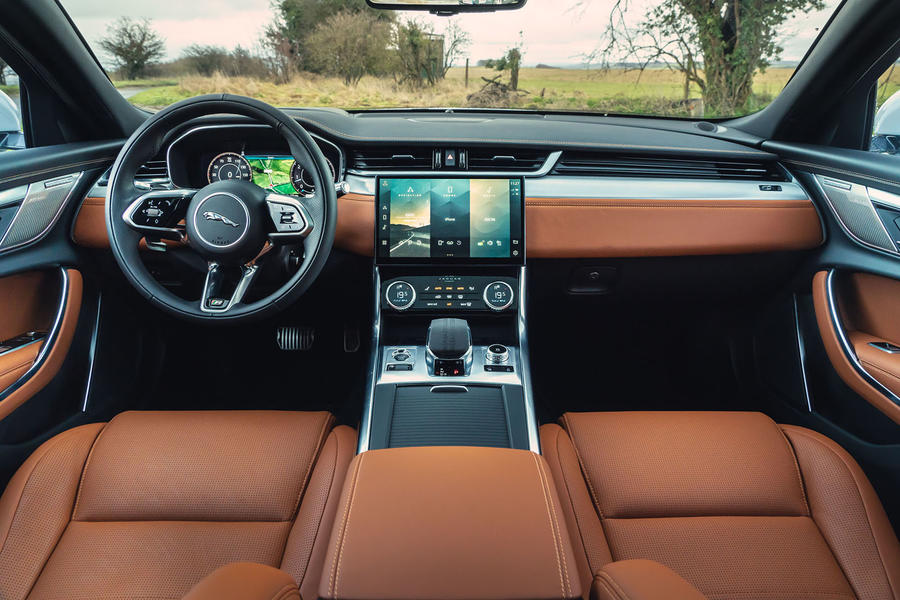 Maybe that doesn’t matter. After all, superior handling and a real gift for ‘precision wafting’ have never propelled the XF to any meaningful sales success.

This time round, when the stakes could hardly be higher, the car’s superb new interior and canny price cut just might do the trick. 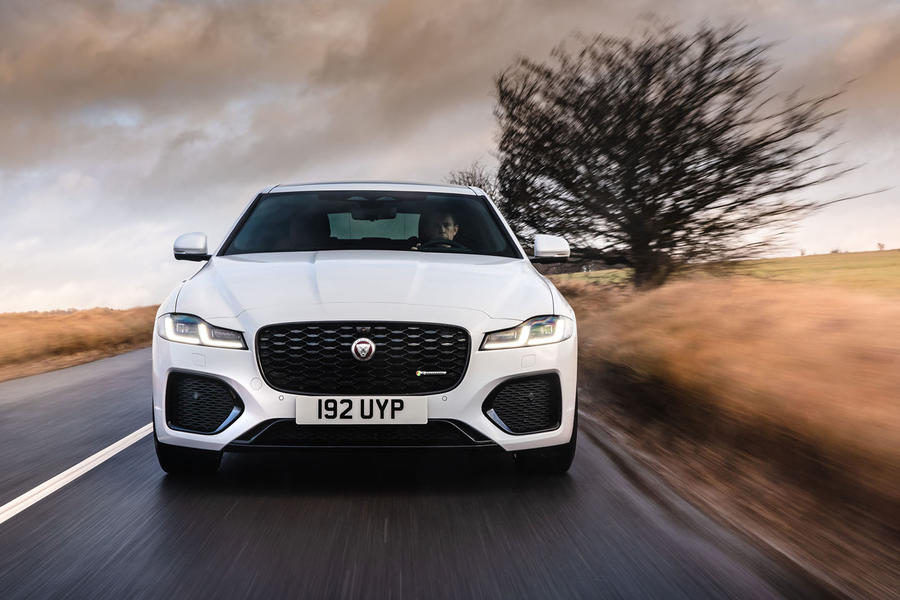 JLR have missed a trick in not offering the XE and XF as PHEVs, they should have also taken this opportunity to introduce the new straight 6 engines which according to reviews are very good in both diesel and petrol form, unless of course the dont fit, which wouldnt suprise me in the slightest.

Too much of the Mk10 about it?, and, like so mentioned, a bit late to the party and discover everyone has dressed casual and you've forked out for a Penguin Suit.

Jaguar interiors look like they’re done by someone who has never designed anything ever before. This on looks almost as bad as the parts bin style iPace. Why have the right vent carry on along the dash, like Audis, but then hit a bit of metal trim and the another vent? Jaguar can’t survive without a 3 series rival.